The downside of being inordinately interested in TV is that you’re more susceptible to having surprises ruined; either because you invest enough time into thinking about something to predict it, or frequent enough places online to read a fan-theory that proves accurate. Therefore, “Trompe L’Oeil” was slightly undermined by the fact I’ve suspected Bernard (Jeffrey Wright) of being a Host for awhile. (And in many ways, it was a very obvious twist for a show about lifelike robots to make).

I take heart that this week’s big reveal didn’t form part of the season finale, which means it’s likely even the writers knew a lot of viewers would guess the truth behind Bernard. But before we rake over this episode’s climactic shock (which still worked very well, as having a suspicion proven correct isn’t a bad feeling to have), let’s look at the rest of the hour’s events.

Some of the machinations surrounding Westworld as a business become clearer. We already knew that Theresa (Sidse Babett Knudsen) has been involved in corporate espionage, but here we discovered it’s not for a rival company, it’s for the board who finance the park. Confused? Well, the board’s representative Charlotte (Tessa Thompson) has arrived with a plan to oust Robert Ford (Anthony Hopkins) as the park’s director and seemingly irreplaceable mastermind. I liked the logic of the idea that Westworld is of value because of the code the Hosts are created from, which was half-written by Ford’s dead partner Arnold and can’t be replicated. Even Ford doesn’t really know how the Hosts’ brains work, but by installing Arnold’s original code into new physical molds, then tinkering with personality settings, they’ve managed to keep the park running for decades since. 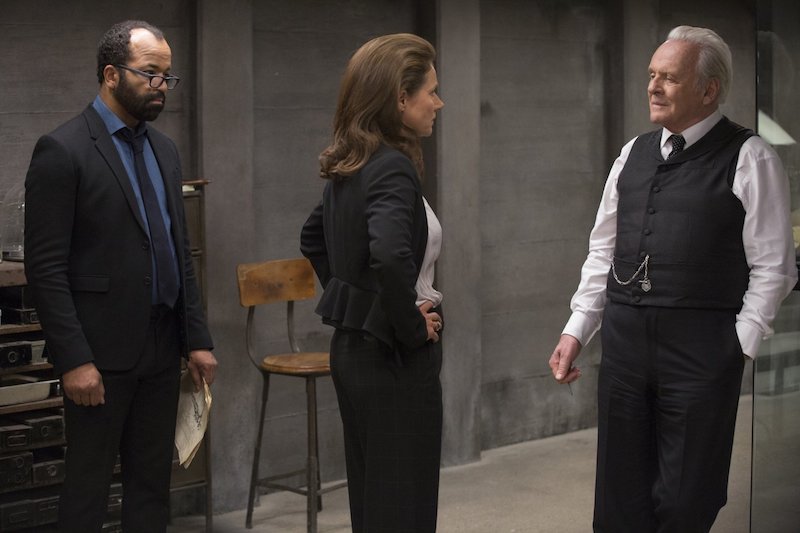 So, the park itself is just a way to develop the R&D that goes into the artificial intelligence that’s more important than billions “playing cowboy”. In truth, the board would rather Ford wasn’t around — but, cleverly, Ford long ago recognised he’d have to make himself irreplaceable, so he holds the board in a stalemate because they believe he’s so entangled in the programming of the Hosts that they fear he could destroy decades of work with a single voice command or hand gesture. I don’t know if this fear is true, but the board would never risk firing Ford to find out. Instead, Theresa’s been smuggling code off-site for the board to pore over, to enable them to negate any threat from Ford if he was ever made redundant.

Here, we saw a big part of their long-term plan move into action, with Theresa and Charlotte falsifying a critical fault with the Hosts that might lead to Ford’s overthrow. And it was a clever ruse, with prostitute Clementine (Angela Sarafyan) being savagely beaten by a technician (himself a Host), before having her memory erased and being reset again, only to seemingly “hold a grudge” and brutally attack the technician who injured her. Theresa and Charlotte blamed Ford’s recent ‘reverie’ update, where the confluence of memory and improvisation seem to be leading to this dangerous outcome. It was an impressive demonstration that had me sold, and it was particularly surprising when Bernard was fired for being negligent in his job to allow the lives of paying customers to be endangered.

A lot of the big reveals were to be found in this week’s behind-the-scenes storyline, but there was fun to be had in the continuing adventure for William (Jimmi Simpson) and Dolores (Evan Rachel Wood), now passengers aboard a train with Lawrence (Clifton Collins Jr), having left Logan far behind. It was a notable development for William becoming more of the lead action hero; the girl of his dreams on his arm, heading into the great unknown to face enemies head-on. He even started to ruminate on what Westworld is doing to him, believing it isn’t a playground for base desires to be fulfilled (as was evidently true for his future brother-in-law Logan), but is instead a place that’s revealing his true character. 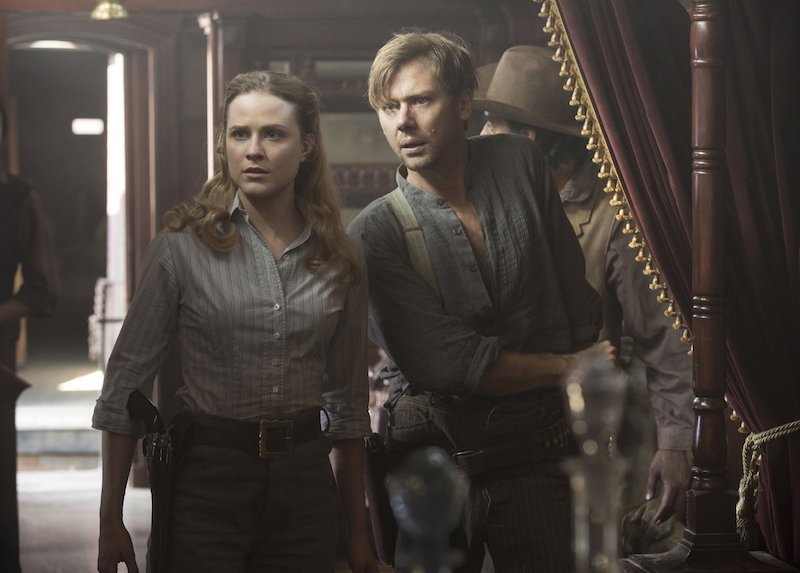 William isn’t this kind of person in the real world, but that doesn’t mean Westworld is just a fantasy where he can play-act. Instead, he’s discovering himself and becoming the person that lives within himself. He even slept with Dolores, whom he seems to be falling in love with very genuinely, in stark contrast to how the Hosts are treated off-site — as we saw Charlotte having sex with Hector Escaton (Rodrigo Santoro) in her bedroom, like he’s nothing more than a high-tech appliance she can switch off on a whim.

Indeed, William is getting so invested in Westworld and Dolores, in particular, that I’m anxious to see how things will resolve. There is, of course, the other prominent theory that William is actually the Man in Black, as these events are taking place 30 years ago. So, maybe he never leaves the park and has to suffer the heartache of seeing Dolores get reset and have similar adventures and relationships with many other customers after him? Even if this was a normal ‘loop’, you have to worry about the sanity of the guests who form real bonds with Hosts they’re suddenly asked to leave behind and return to their otherwise humdrum existence. It’s easy to see why you’d want to live inside Westworld forever, if that’s what ends up happening to William. The fact Lawrence praised William, saying he’s a “natural killer”, seems to preempt him maturing into the dead-eyed MIB.

Also, the situation with Maeve (Thandie Newton) continues to enthrall me, but it’s mostly because of Newton’s insanely good performance. However, you really do need to take a big leap to accept this situation could develop. I just don’t see why the ‘butchers’ Felix (Leonardo Nam) and Sylvester (Ptolemy Slocum) can’t get on top of this problem, considering they literally have Maeve under their control with a system that could turn her into a simpleton with the flick of a switch. I know she threatens them with death in this episode, but if I’m honest the show hasn’t done a good job making it seem plausible Maeve becoming self-aware is a problem that can’t be overcome. Why don’t they switch her off and go tell someone? Perhaps they can’t now, but back when she first woke up? I think the show just needed to get Maeve into the position of power she’s in, despite it not being as likely as they’ve made it seem. 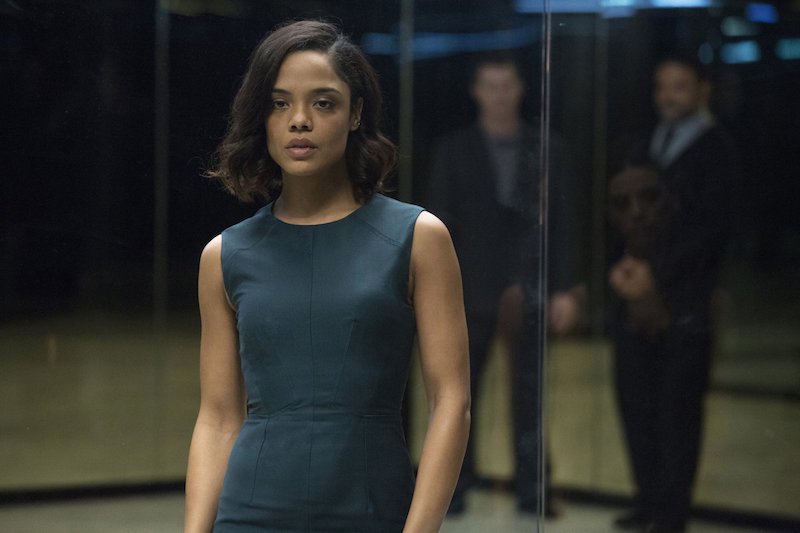 Back to the heart of the matter, with the sequence that’s going to be the major talking point for this week: Bernard taking Theresa to see Ford’s replica of his childhood home in ‘Sector 17’, then discovering an outdated lab in the homestead’s basement (with equipment that can create Hosts in a few days), before Theresa discovered a schematic proving Bernard is just an automaton. And then Ford appeared very spookily, giving Hopkins another chance to be effortlessly creepy and finally remove all doubt that Ford is a villain. It’s unclear why he created Bernard many decades ago if the other ‘unregistered Hosts’ were all clones of his family, but it’s still possible Bernard is a clone of Arnold. However, surely other people working at the park would know what Arnold looked like? And even if nobody else but Ford worked with Arnold years ago, he must have been photographed! You don’t co-create a place like Westworld and somehow remain anonymous.

Anyway, it was a terrific moment, despite knowing it was coming for a long time. You felt very sorry for Bernard, who’s been programmed to overlook anything that indicates he’s not human. He couldn’t even comprehend his own design paperwork when Theresa passed it to him as proof he’s not human. Wright did an incredible job here, as the uncanny humanity of his character appeared to try and overthrow his basic programming at times. We saw him struggle to deal with the fact Theresa and Ford were suddenly talking to him as if he was just a machine. And this reveal also made sense of how Ford’s always several steps ahead of people like Charlotte and Theresa. In the latter’s case, Bernard’s been sleeping with her for while at his command, and their pillow talk has clearly been getting back to Ford later. Who knows how many other “spies” he has working for him, pretending to be human and feeding him intel.