In the thrilling finale of Game of Thrones’ sixth season, three key players strengthen their power bases, Jon’s lineage is confirmed, Winter finally arrives, and the future of Westeros looks set to be decided… 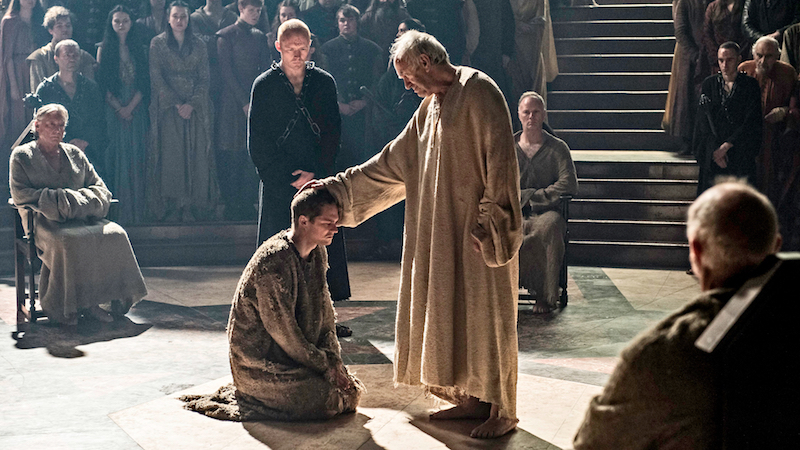 It was the day of Cersei Lannister’s (Lena Headey) trial at the Great Sept of Baelor, and “The Winds of Winter” opened with an extended sequence that saw her plan to escape the High Sparrow’s (Jonathan Pryce) so-called justice spin into action. It was slightly undercut by my predicting this turn of events halfway through the season, but it was still beautifully choreographed and built a wonderful tense feeling of impending doom. Qyburn (Anton Lester) had maester Pycelle (Julian Glover) slaughtered by his “little birds”, while everyone crammed into the Sept awaiting Cersei’s appearance were incinerated by wildfire stored directly underground—foreshadowed by the flashback to the Mad King threatening to likewise blow up his own city, many years ago.

In effect, Cersei now executed a plan of a previous monarch, which her own lover/brother Jaime (Nicolaj Coster-Waldau) thwarted to earn himself the ‘Kingslayer’ nickname. That would suggest their relationship will sour very quickly, and there was tension in the gaze Cersei held with the returning Jaime during her hasty coronation. It seems likely Jaime’s not happy his beloved has become the kind of mass killer he can’t stomach, and indirectly responsible for the death of their son Tommen (Dean-Charles Chapman) — whose suicide, calmly jumping out of a window after realising his wife Margaery (Natalie Dormer) was killed in the explosion, was one of the episode’s better surprises. (Also, the prophecy that all of Cersei’s children will die has now been fulfilled…) 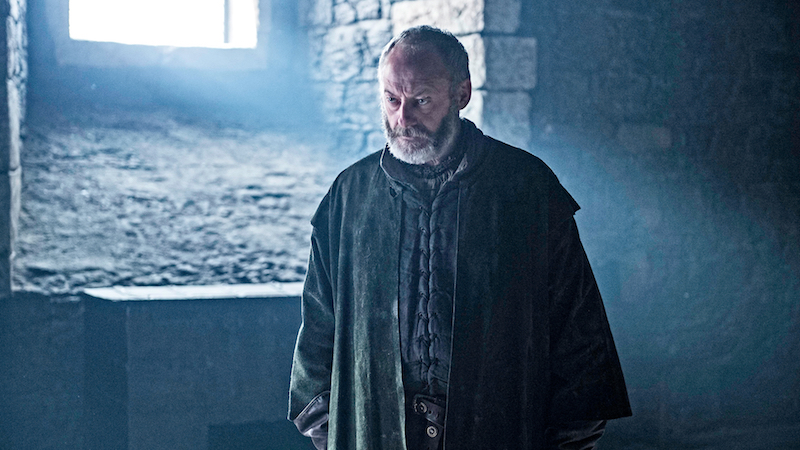 Finally, Davos (Liam Cunningham) confronted Melisandre (Carice van Houten) about the murder of Shireen, the little princess callously burned at the stake to appease the Lord of Light. It’s been a part of the story that never quite worked for me, as I still don’t understand why Davos has spent most of the season never even asking if Shireen survived the battle between Stannis and the Boltons. But his outraged conversation with her, in the presence of Jon Snow (Kit Harington), was satisfying. I never expected the end result to be Jon exiling Melisandre to the south, either. She was a vital part of his army, as the only person of magic who might be useful against the undead White Walkers, but it seems Game of Thrones has other plans. Where will Melisandre go now? My guess: she’ll join the King’s Landing storyline, and perhaps become the reason all the southerners start to take the threat of the White Walkers seriously.

Jumping ahead slightly, it was a terrific moment when a victorious Jon Snow was sat beside Sansa (Sophie Turner) at Winterfell, with a gathering of the Northern Lords and the Knights of the Vale swearing their fealty to him as the ‘King of the North’. And yet, Littlefinger (Aidan Gillen) was oddly quiet and threw Sansa a knowing glance, as he’d previously made it clear he thinks she’s the future of Winterfell as a full-blooded Stark. Is it possible Jon will come to agree, and it’s his sister who’ll eventually rule? The show does seem to be putting women into positions of high power just lately… 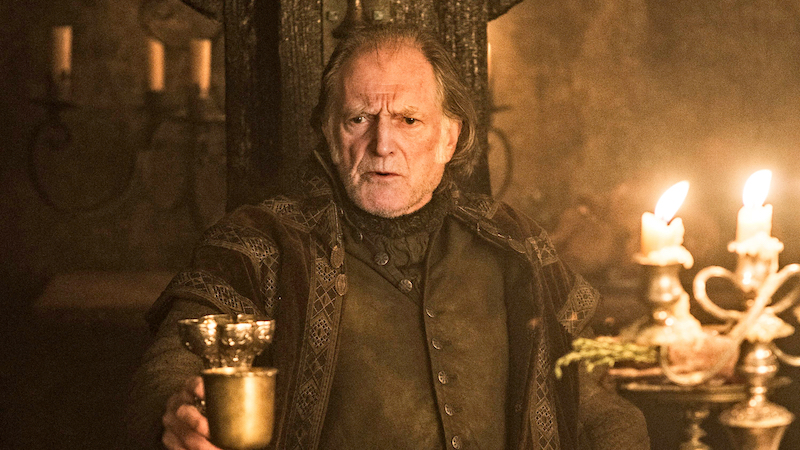 There’ve been rumours of despicable Walder Frey (David Bradley) meeting his demise this year, and it had merit in terms of symmetry, as the Red Wedding occurred three seasons ago. Frey’s conversation with Jaime had already made him anxious about the long-term prospects of his House, as the Lannisters keep having to get involved in Riverrun affairs up north, but long overdue Stark vengeance came from Arya (Maisie Williams)—putting her knife skills to their best use yet, by slashing the throat of her mother and brother’s cold-hearted killer. And hey, she even baked meat pies out of his sons. To be pernickety, I don’t understand how Arya can make ‘masks’ of people and assume different identities, as she’s been kicked out of the House of Black & White, but whatever. I’m glad she’s back on home soil.

A new location for the finale, with Sam (John Bradley) and Gilly (Hannah Murray) arriving in Oldtown and heading to its impressive Citadel. Inside, Sam was left awestruck by the sheer size and scale of the grand library inside, but it remains to be seen how the Arch-Maester will take to him. I wonder who they’ll cast to play him. It was also a lovely touch to have Citadel release white birds across the country, as a signal that Winter is finally here.

The Dorne storyline was such a disaster last year that I wasn’t surprised it barely factored into season 6, but there are signs of rejuvenation for next year. I don’t accept that Olenna (Diana Rigg) could travel to Dorne so quickly, following the destruction of the Great Sept of Baelor at King’s Landing, but there are some things on Game of Thrones you have to just accept for the sake of the story. Olenna now has an ally in Ellaria (Indira Varma), over mutual Lannister hatred, and with the surprise appearance of Varys (Conleth Hill) it seems they’re united behind Daenerys (Emilia Clarke) and her planned takeover of Westeros. But that’s for next year… 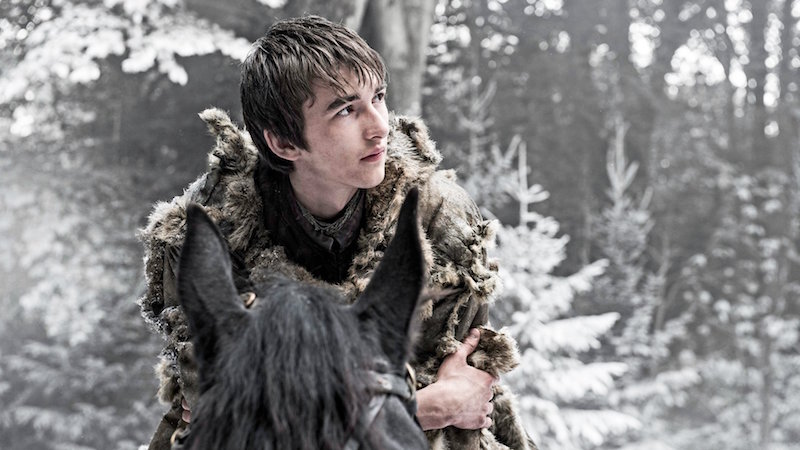 Perhaps the most disappointing storyline was Bran’s (Isaac Hempstead Wright), because the exciting return of Uncle Benjen (Joseph Mawle) a few episodes ago doesn’t seem to have led to much. Benjen’s simply delivered his nephew to the Wall, and it’s mentioned that he can’t go beyond because it was built using powerful spells and magic. This was fresh information for TV watchers, as most will just have assumed the Wall is impregnable due to its enormous dimensions. It’s now more plausible the White Walkers haven’t just attacked it, although I’m sure something’s going to happen to disperse its magic before too long.

The one good aspect of Bran’s storyline was receiving a final flashback, as he touched a weirwood tree and returned to continue the vision of young Ned (Robert Aramayo) heading up the Tower of Joy to find his sister Lyanna Stark (Aisling Franciosi) dying after giving birth to a child. And yes, the child was a newborn Jon Snow, as a match-cut to the now adult Jon Snow confirmed. I happen to know a little more about exactly why Lyanna wanted Ned to keep Jon’s true parentage a secret, but don’t want to spoil things for TV-only fans—but, essentially, a popular fan theory is almost certainly true now. OKAY, SPOILERS AHEAD: Jon is half Targaryen, half Stark. 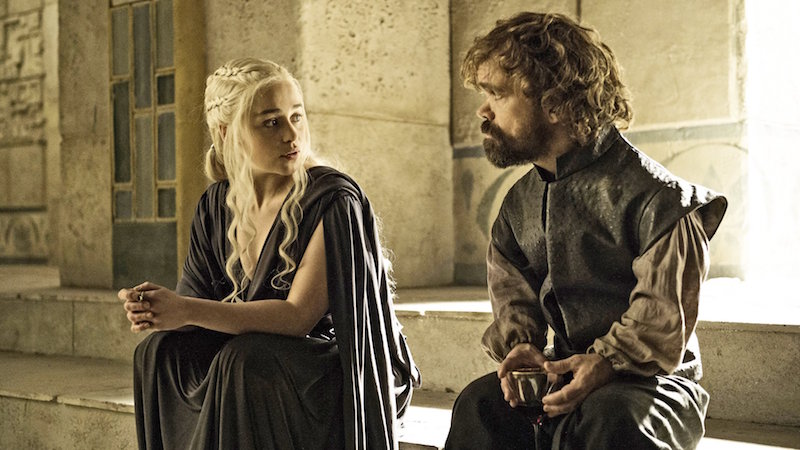 Having vanquished the Masters, Daenerys can finally focus on her plan to conquer Westeros and be crowned rightful ruler of the Seven Kingdoms. As part of that plan, Daario (Michiel Huisman) was asked to remain in Meereen to keep the peace in her absence, and because it’s not appropriate to bring your lover when you’ll be marrying someone to form an alliance. And who might that be? All the eligible bachelors in Westeros, please stand up! It’s gonna be Jon Snow, right? George R.R Martin’s books are called ‘A Song of Ice & Fire’, after all. OK, MORE SPOILERS: it’s totally fine if Jon marries Dany, despite secretly being her nephew. The Targaryens have a history of incest to keep power through their bloodline, and the show has already made viewers feel tolerant of incest thanks to the Cersei/Jaime love affair. Right? Or am I a bit wrong in the head? Maybe Jon and Dany will sleep together, then realise they’re related and it’ll all get very awkward.

For me, one of the most emotional moments was seeing Tyrion (Peter Dinklage) made ‘The Hand of the Queen’, considering his short-lived tenure as ‘Hand of the King’ in Westeros. A role he performed extremely well, although his Battle of the Blackwater victory was overshadowed by the return of his disapproving father. I liked how this demonstrates just how far he’s come, as travelling to Meereen to seek out the Mother of Dragons has given everything he’s always deserved but been denied by his own family. It was a touching moment, seeing Tyrion accept the broach from Dany and kneel in front of her.

While this couldn’t hope to eclipse the bravura filmmaking of last week’s “Battle of the Bastards”, season 6’s big finale contained a great many crowd-pleasing sequences and offered some huge steps forward for the narrative. I just wish more of them had been huge surprises to me, but all stories get easier to predict the longer you’re embroiled in their world.

Dany’s finally sailing to Westeros with her armies and dragons. Arya’s back in Westeros and out for blood. Jon has united the North. Bran’s reached the Wall. Cersei has seized ultimate power at King’s Landing. And there are lots of fresh allegiances to consider, too. It’s impossible to see how Daenerys can fail with the Greyjoys, Martells and Tyrells on her side before a single battle’s been fought overseas. And considering it seems likely the characters in Winterfell aren’t going to oppose the Mother of Dragons, as they’re quite happy with having a ‘King of the North’, can Cersei Lannister plausibly put up much of a fight? It doesn’t look good for her. I loved how her coronation carried an unmistakable whiff of fear and darkness in the crowd watching… whereas Jon and Dany offer optimism, change and hope as rulers of their own lands.

This wasn’t the most surprising of finales, but it was a pleasure to see old theories be proven correct, and the story leap closer to what feels like The End. It’s been confirmed that Game of Thrones only has a maximum of 15 episodes left, to be split across two more seasons, and that seems about right. See you next year!