Although North by Northwest is now 60 years old, it’s still considered one of the greatest films ever made, and one of the few that’s earned iconic status. Alfred Hitchcock’s romantic spy-chase thriller has become a huge influence on each new generation of cineastes and filmmakers alike. After all, it even has a compass direction of its very own.

‘Mata Hari’, Not the ‘Marie Celeste’

Scriptwriters Ernest Lehman and Alfred Hitchcock were working on an adaptation of Hammond Innes’ maritime thriller Wreck of the Mary Deare (loosely inspired by the mystery of the Marie Celeste, a ship found deserted on the high seas) when they hit writers’ block. Hitchcock suggested working on another film and confided he’d always wanted to shoot an assassination scene at the United Nations and a chase sequence at the Mount Rushmore monument. This, plus a mistaken identity spy story idea from journalist Otis C Guernsey, prompted the first 65-pages of a screenplay which Hitchcock loved and took to MGM. 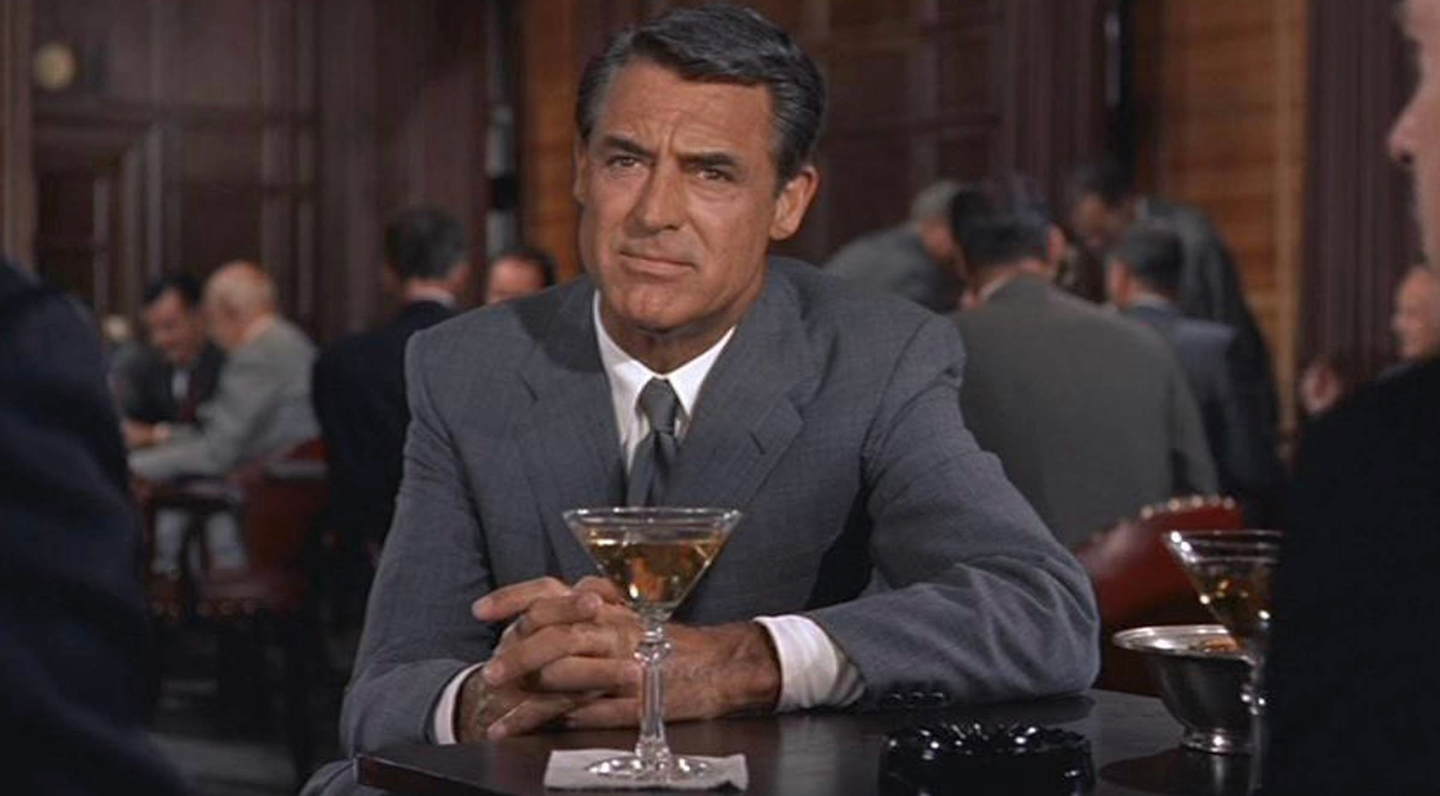 Madison Avenue advertising executive Roger O Thornhill (Cary Grant) raises his hand at the wrong moment in a hotel lobby and is mistaken for mysterious government agent George Kaplan, who’s in pursuit of a ruthless yet suave spy called Phillip Van Damm (James Mason). Soon, Thornhill is running for his life from Van Damm in a thrilling cross-country chase, during which he meets femme fatale Eve Kendall (Eva Marie Saint), before a showdown at the Mount Rushmore Presidents Monument.

Lehman researched the proper arrest procedure for drunk driving (!) and visited every location while writing the script, so he could make the best use of what those places had to offer cinematically and to lend authenticity. As Hitchcock explained in a later interview, this realism provided the basis for the fantastical incident of the story: the hero caught in a nightmare “that feels so real, with its own internal logic, that you are relieved when you wake up from it.”

Lehman hit writers’ block, again, while trying to complete the script and Hitchcock met with him to thrash out the ending. They discussed getting a mystery writer on board to help when Lehman had a “right brain” flash of inspiration: Eve shoots Thornhill at the Mount Rushmore cafeteria! This cafeteria, built in 1957, was sadly demolished in 1994. If you watch this scene you can notice a little boy in the background put his fingers in his ears just before the shots are fired—as the young extra had sat through quite a few takes so knew what was coming! 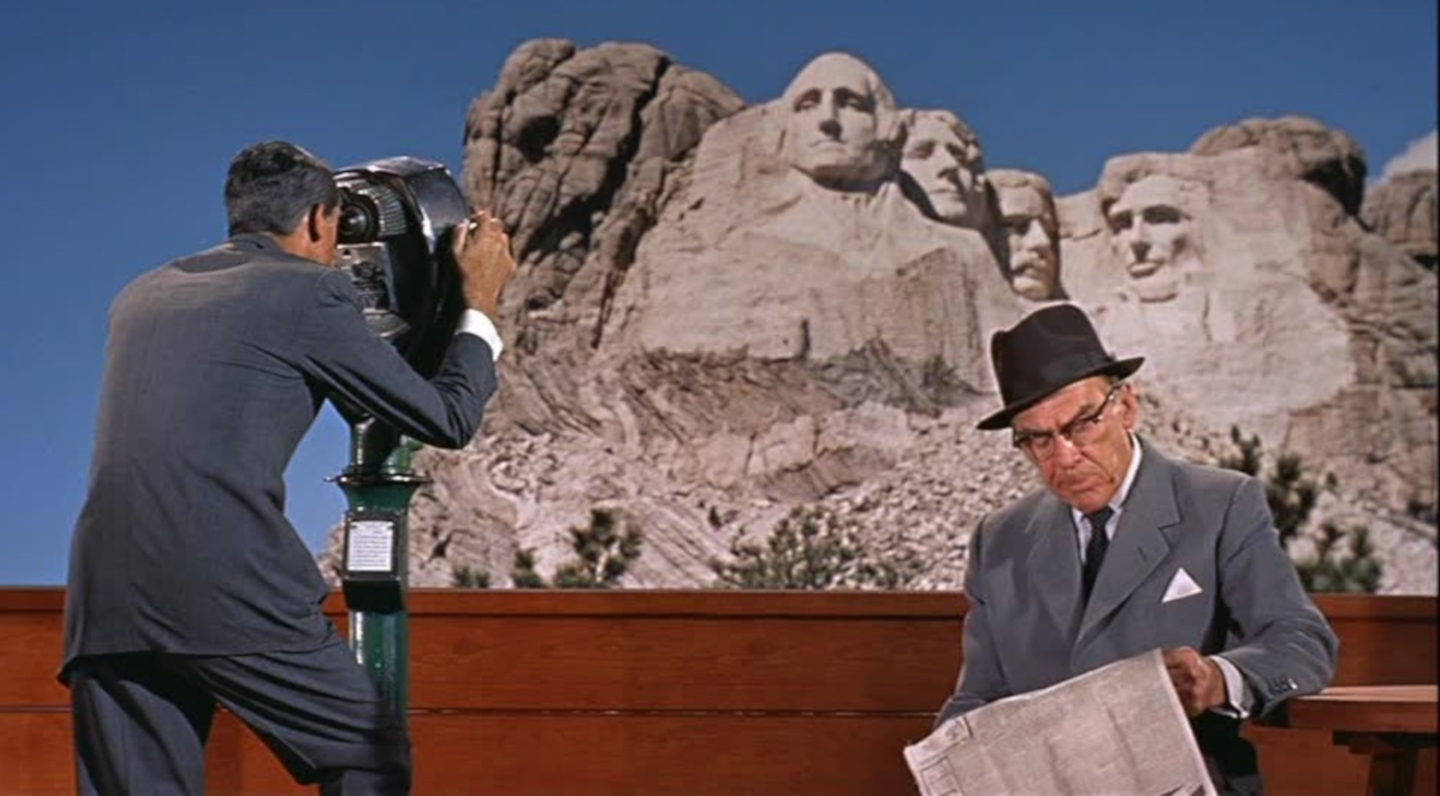 Iconic locations are sprinkled throughout North By Northwest: Madison Avenue, the Plaza Hotel, the United Nations Building, Grand Central Station in New York, then Chicago, Idaho, and Mount Rushmore. In fact, the film trailer showed Hitchcock in front of a map of America that showed the route of the Grand Tour in red.

Hitchcock was refused permission to film at the U.N Building and at the Mount Rushmore Presidents Monument, but he found ways around this. The shot of Cary Grant outside the UN Building was filmed from inside a truck disguised with a carpet cleaning trade logo. Hitchcock also went inside the building incognito, accompanied by a photographer, and took visual notes to recreate the lobby on a film set later. 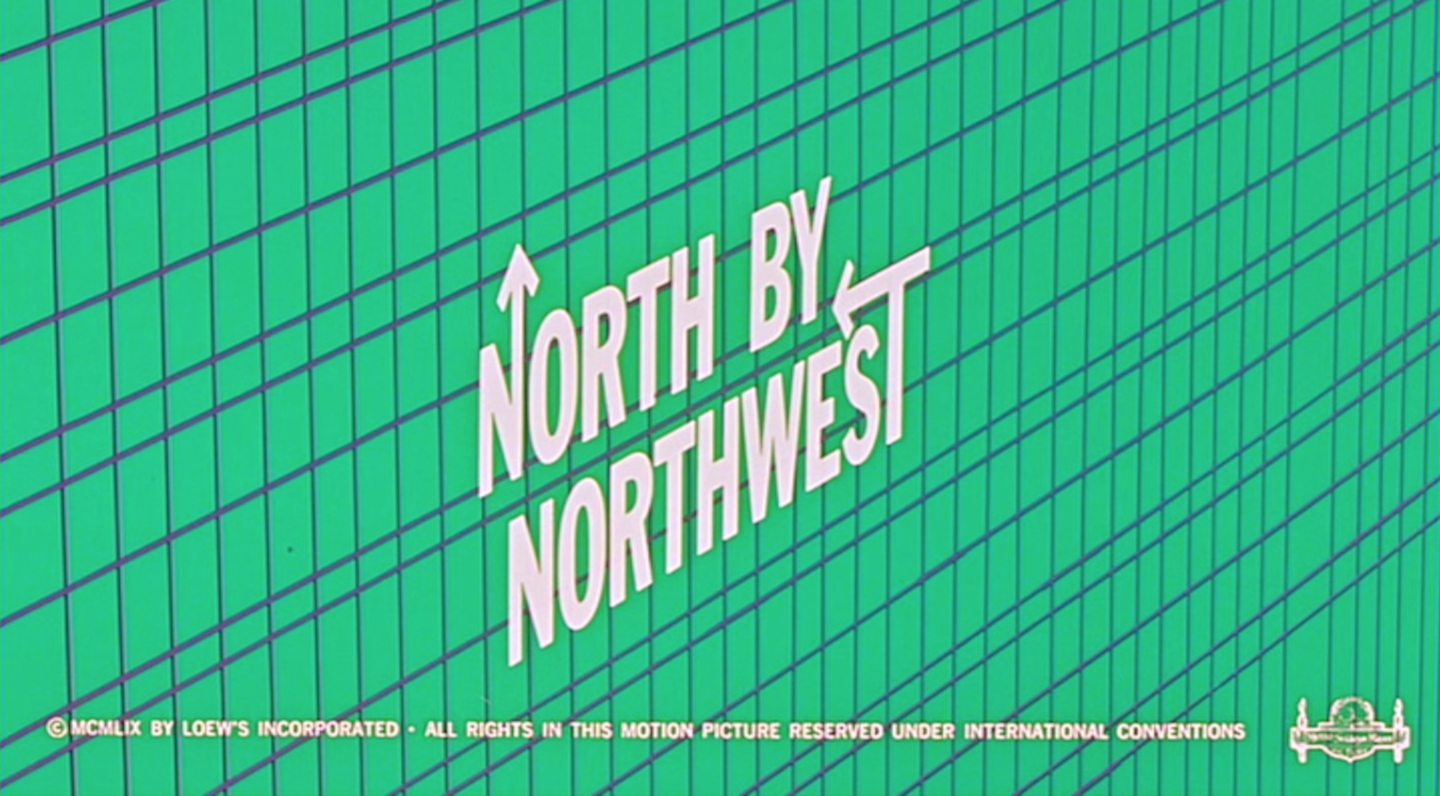 A Design for Life

As well as using matte paintings, Hitchcock drew every single shot used for the film in advance on a detailed storyboard. He then hired graphic designer Saul Bass to design the innovative title sequence—the first to use ‘kinetic type’. Diagonal lines intersect on a green background to form a grid for the titles to slide in an out, while the background dissolves into the wall of windows that is the MIT building in New York reflecting commuter rush-hour traffic, thick with yellow cabs. An inventive establishing shot indeed. We’re then immersed at pedestrian level, its hectic pace emphasised by Bernard Herrman’s tense soundtrack—the sequence culminates in a cameo by Hitchcock—a bus shuts its doors in his face and pulls away leaving him stranded on the pavement!

Bernard Herrman had worked on the music score for Orson Welles’ Citizen Kane (1941) and Vertigo (1958), before famously composing the classic music for Psycho (1960).

The film was shot in widescreen Vistavision at the insistence of Hitchcock. Only one other MGM film used this format, High Society (1956). 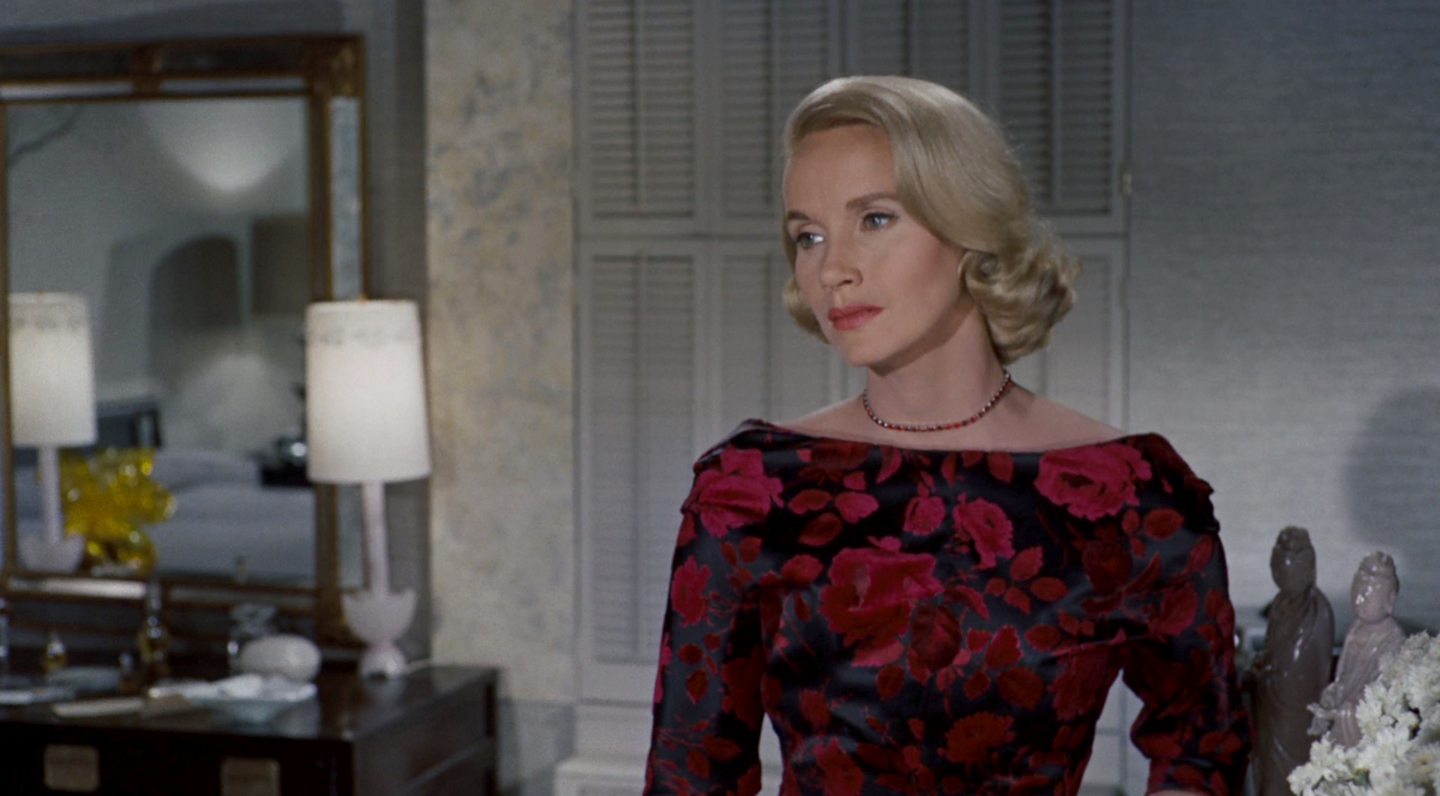 When casting the film Hitchcock had James Stewart in mind for the hero, ‘the ordinary guy’ caught in extraordinary circumstances. Stewart had already starred in Hitchcock’s Rear Window (1954) and The Man Who Knew Too Much (1956) but was not available at the time of the shooting. Hitchcock turned to another favourite lead, Cary Grant, who had starred in his films Suspicion (1941) and Notorious (1946). The two got on well and Grant had a disarming, light touch suitable for the character of an ad exec thinking on his feet. Credit also needs to go to the iconic grey suit (sometimes covered with dust) which Grant wears for most of the film—GQ magazine voted it ‘Best Suit in Film History’ in 2009! And, of course, Grant wears it well… always meticulously well-groomed and stylish, both off-screen and on. He uses Eve’s ‘tiny razor on big face’ to freshen up while on the run. Costume designer Edith Head once described Grant as the most stylish and fashion conscious Hollywood actor she ever worked with.

MGM wanted their contracted actress Cyd Charisse for the role of Eve Kendall, but Hitchcock eventually cast Eva Marie Saint, who had already won an Oscar opposite Marlon Brando for On the Waterfront (1950). He rejected the wardrobe picked out by the studio and instead took her shopping at the famous New York Store Bergdorf Goodman to pick out the gorgeous designer suit and the dress she wore. He also arranged to have her waist-long blonde hair trimmed short and styled to make her look more ‘exotic’ and believable as Van Damm’s ‘kept woman’. He advised her to avoid kitchen sink dramas in future, as women in the audience had just left the sink to visit the cinema and wanted to see something more glamorous! 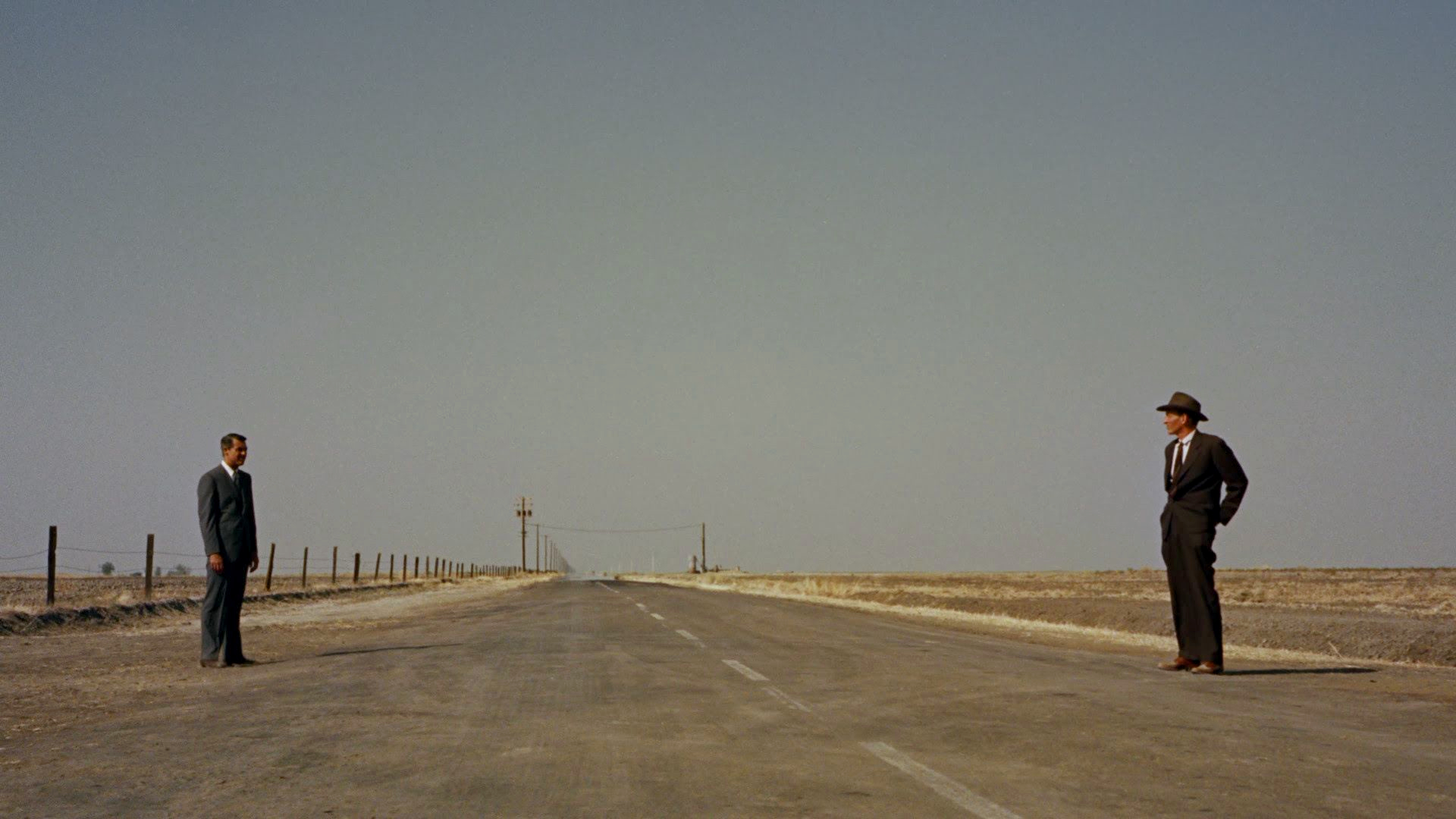 No matter how many times you watch, it still gives you a chill to see Cary Grant spewed out of a bus and left to stand alone in an enormous flat landscape with nowhere to hide under the big sky. Hitchcock designed the scene to avoid the noir cliché of meeting on street corners, in the rain, under streetlights, in a city, at dead of night waiting for the limo to drive past and let rip machine gun fire…

The flat sunny landscape is vast, and a distant town was matte-painted out to emphasise its isolation. The silent slow pace of the scene builds tension as the black limo approaches… and drives past the expected cliché. Then a man is dropped off—could he be Kaplan, here for the rendezvous? But he takes the next bus out. While he waits, he innocently comments about how strange it is that the duster plane is dusting crops where there are none… and then leaves Thornhill alone once more. Just as the plane starts to veer towards him!

Suddenly he’s forced to the ground as it swoops down. Grant, a master of physical comedy and normally almost slapstick in his action sequences, does a super-serious athletic sprint, face gritted with fear, towards the only cover—some dried-up corn. He gets dusted for his trouble and then runs out to flag down a truck, is almost run over, then the out of control plane crashes into the truck… It’s all gone from bad to worse until he escapes with a stolen pickup truck, an old fridge strapped to its back… next seen parked on a busy street in Chicago.

The scene has been analysed and emulated so many times. Watch the original and remind yourself just how awesome it is.

Strangers in the Night

The romance at the heart of the film is encapsulated in classy and playful love scenes that skirt the film codes of the era rather closely at times. Thornhill, in sunglasses, is rescued from police by Eve Kendall and meets her later in the dining car. He orders a Gibson cocktail and lights her cigarette… she steadies his hand and then blows out the flame. “It’s going to be a long night and I don’t particularly like the book I’ve started,” she observes during their innuendo-laden exchange.

Later in the sleeping compartment, they share a lingering embrace, circling and kissing as the train rocks beneath their feet. Eve protests that she only knows that he is an ad man, has a way with words, has taste in food and clothes… Thornhill replies “… and taste in women. I like your flavour.” The rest is left to the imagination.

Later still, Thornhill rebukes her but forgives her when he realises her predicament and proposes as they’re dangling from Mount Rushmore and he begins to haul Eve to safety. A clever cut ends with him pulling her onto the bed in the sleeper compartment once more as “Mrs Thornhill” and, of course, the final shot is of the train hurtling into a tunnel… 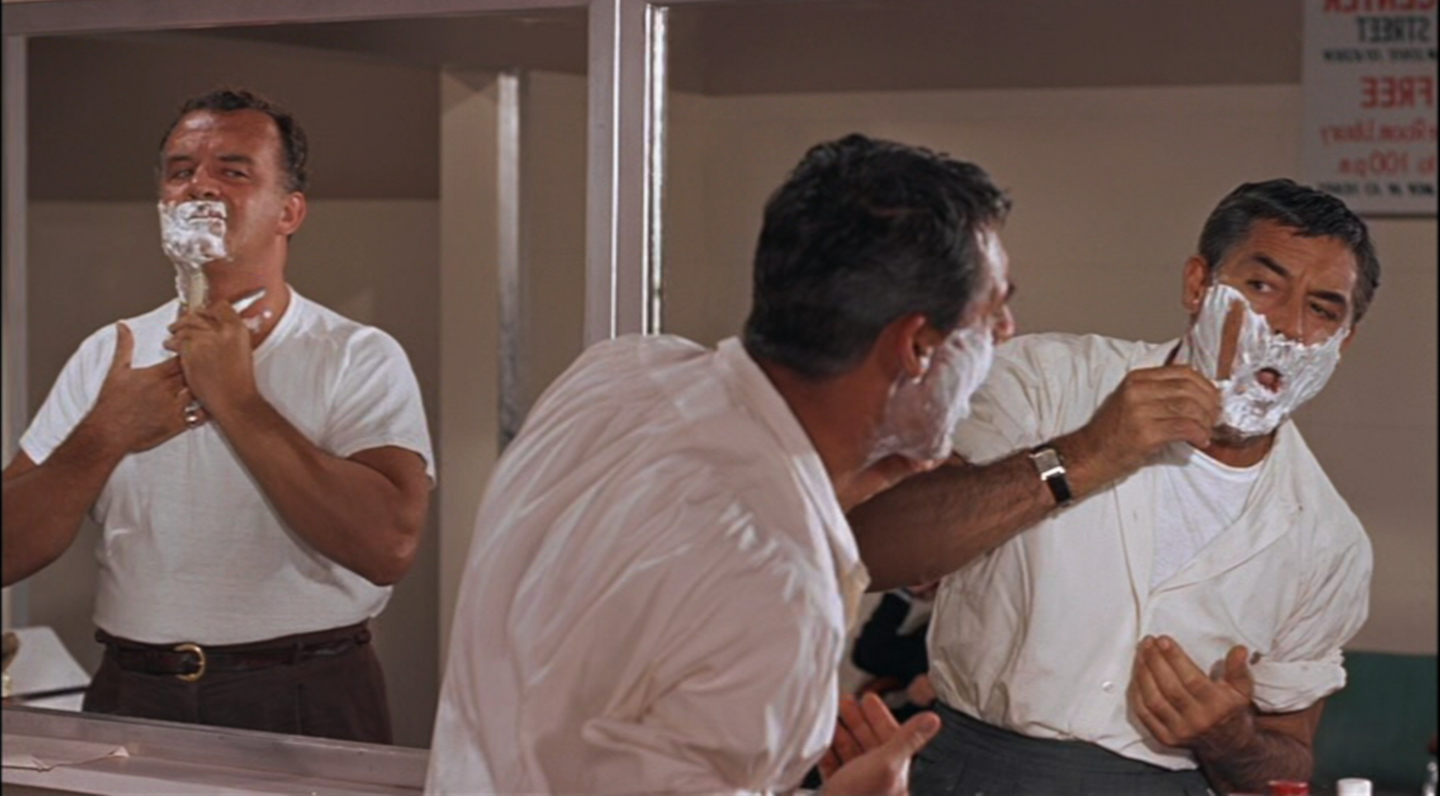 Although it went over budget, North By Northwest made a total profit of $837,000 at the box office and was nominated for three Academy Awards. Since then it’s only grown in reputation as a true Hitchcock classic. It’s perfect escapism, a thrilling journey, and continues to mature well…

It’s an exemplary film, thanks to its storyboards and precise shots that give a clear narrative to a very convoluted plot! Hitchcock only gave Eve Saint Marie three pieces of directorial advice—to lower her voice, avoid using her hands, and always look directly at Cary Grant. When he filmed Grant walking across the lobby of the Plaza hotel, he gave no direction at all as “Cary was perfectly used to walking across that lobby.” (Grant kept an apartment at the Plaza during shooting). The Mount Rushmore scenes, however, took five days of scrambling over the set. Eva Marie Saint scraped her arm quite badly when she slipped at one point, so the injury was incorporated into the scene. Hitchcock’s directorial touch allows the viewer to become a voyeur and guides our every laugh, gasp, or sigh throughout the film. He used this talent to similarly great effect in his next film, Psycho. 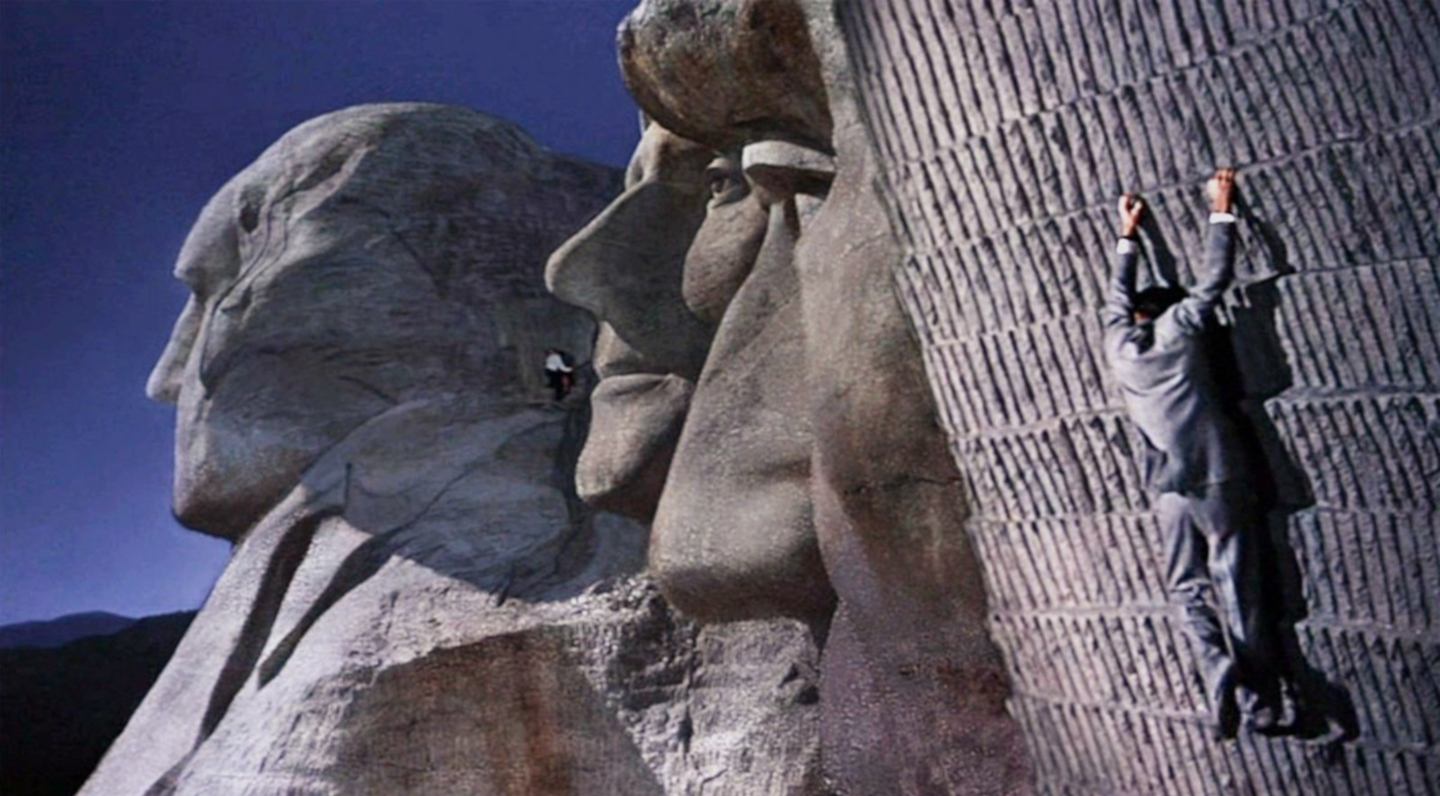 North by Northwest remains my favourite Hitchcock because it’s still so fresh while being so perfectly of its time. The sumptuous colour, the classy sets and costumes, the great actors… what’s not to like? It captures a time when cigarettes were still “cool”, you had to send a telegram rather than text your mother if you were going to be late for dinner, and “c’est la guerre” referred to a Cold War still fully raging…

It has a seam of rich imagery that has entered pop culture and definitely fuelled later James Bond movies. The helicopter sequence in From Russia With Love (1963) was a particular homage to North By Northwest. And if you watch modern Cold War movies such as Bridge of Spies (2015), Guardians of the Galaxy Vol.2 (2017), HBO’s Mad Men, you’ll see how indebted they are to North By Northwest either aesthetically or narratively. And that’s not mentioning the many references in Twin Peaks, The Simpsons, Phineas and Ferb, etc.

Apparently, while on set shooting the movie, Cary Grant told Hitchcock “we’re a third of a way through the film and I still can’t make head or tail of it!” The script now ranks at No.21 on the Writers Guild of America’s list of 101 Greatest Screenplays of all Time.

Anyone for a Gibson?