If crazy robot-versus-monster action is your idea of a guilty pleasure, then be prepared to have a lot of fun with Pacific Rim: Uprising. The deadly kaiju (“strange beast” in Japanese) return to smash more cities in the sequel to Guillermo del Toro’s Pacific Rim (2013). This time, they’re challenging the son of Stacker Pentecost (Idris Elba), Jake (John Boyega), and to fight them humanity will once again turn to the Jaeger program. The construction of enormous robots has continued apace since the events of the first movie, and now the world believes it’s ready to fight back against invading gargantuan monsters with their towering mechanical warriors.

Pacific Rim, while not necessarily beloved, was a movie that wholeheartedly embraced some clichés in order to let its colourful creative energy flourish with spectacular world-building and engrossing action. It’s a film that didn’t take itself too seriously, and was fully aware it’s appealing to an audience that wants to watch giant robots do battle with large monsters. Fans should be ready for a sequel that both honours and builds on that foundation. While del Toro’s original unquestionably has more style and heart, Steven S. DeKnight’s Uprising is a worthy follow-up that emphasises many of the same themes, with a zippier pace, remarkable spectacle, and a fun tone bolstered by an excellent leading performance from charming Boyega.

Jake isn’t like his father. Stacker Pentecost was a ruthlessly efficient military leader, while his son’s the embodiment of a dropout, having ditched the Jaeger program when he was young to live the high life in abandoned cities destroyed by the kaiju after the war. He’s pulled back into the program after being caught with Amara (Cailee Spaeny), a young girl intelligent enough to have designed and built her own fully operational Jaeger. Jake’s sister Mako (a returning Rinko Kikuchi) informs Jake his only way to escape jail is to re-enlist and help train a younger generation of Jaeger pilots. Charlie Day and Burn Gorman reprise their roles as argumentative scientists, while Jing Tian joins the cast as businesswoman Liwen Shao. As it turns out, Jake’s returned just in time. The alien threat soon resurfaces in a compelling and unpredictable way, and it’s up to the pilots of these ridiculously large robots to save the world from destruction.

As before, the theme of overcoming past traumas is front-and-centre. For Jake, these issues are all about how he feels he lost his father’s acceptance, while Amara is still reckoning with the helplessness she felt in a previous kaiju encounter when she was even younger. The most interesting concept at the heart of the first Pacific Rim was “drift compatibility” and the idea these machines are too enormous to be operated by one person alone. The shared neural load of two brains is required to pilot a Jaeger, but for this to work participants need to be open and ready to share their memories, feelings, and experiences. It’s a clever concept because it successfully illustrates how, for humanity to survive its greatest enemy, people need to come closer together and become more emotionally honest. 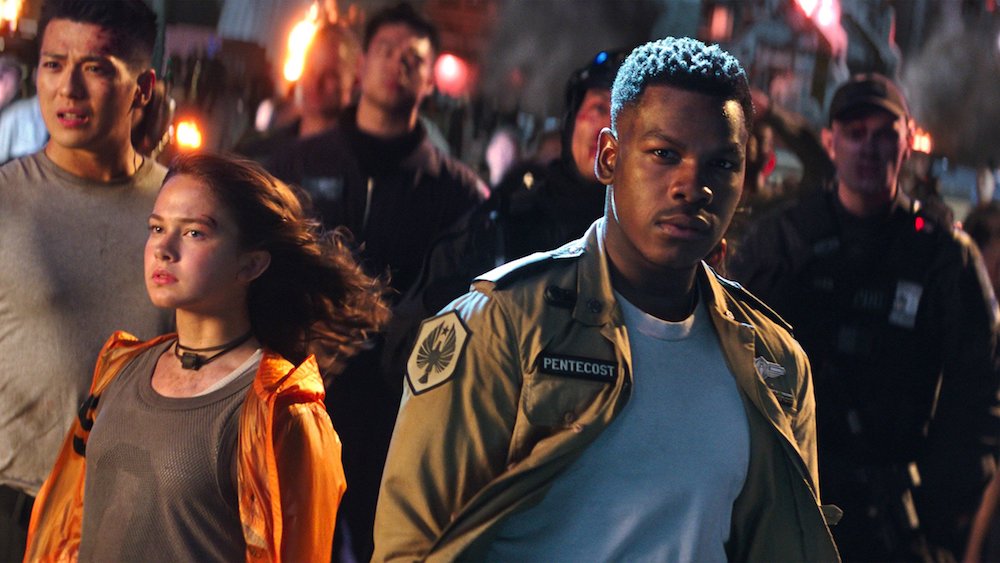 There may be four credited writers involved with this sequel, but a lot of DeKnight’s voice is still evident. He comes from the Joss Whedon school of screenwriting, having worked on both Buffy the Vampire Slayer and Angel, and a sense of irreverence mixed with solid emotional beats helps to make this movie work. The emotional arcs are very straightforward and not many of the characters have depth, but the leads are more rounded than before and there’s no doubt Boyega’s enthusiasm makes the lead hero a big improvement on Charlie Hunnam’s decent but generic Raleigh Becket.

In fact, Boyega is the main reason to recommend Uprising. He’s got a terrific energy, can sell any character beat (no matter how ridiculous the situation), and oozes charisma in every scene. His performance brings so much humour and fun, it transforms the whole movie into an entertaining experience. Pacific Rim: Uprising is very clear about what it is, and that it doesn’t take itself too seriously is a big part of why it’s so enjoyable. 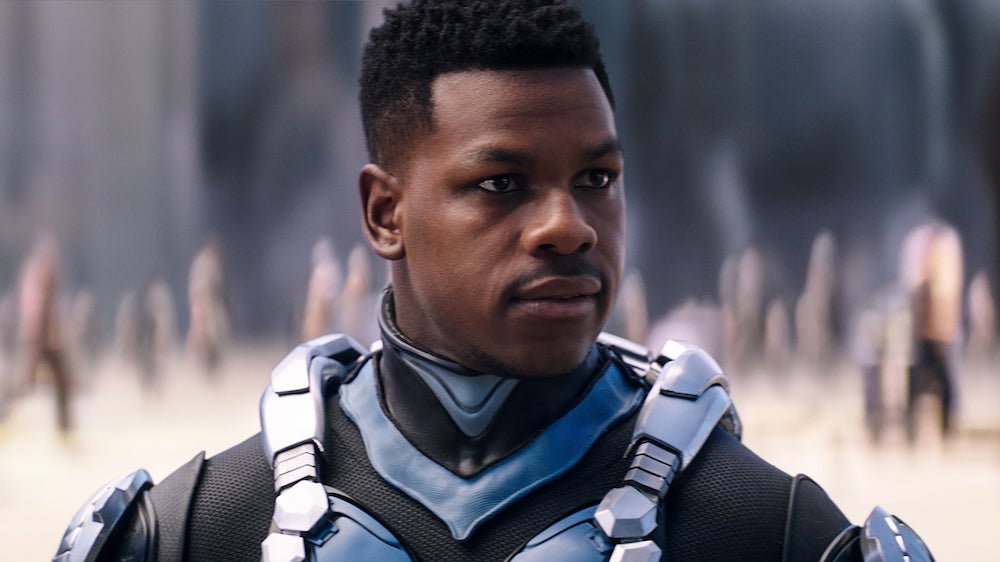 While the story has its fair share of twists and turns, with more plot than the first, there are definitely elements missing without Guillermo del Toro behind the camera. For one, it doesn’t look as stylish. Pacific Rim had a distinctive colour palette with a lot of contrast and neon lights, and the visual approach matched Ramin Djawadi’s excellent score. The monster designs from del Toro were more inventive, and everything had more of a dreamlike quality. Some of the quirks and the heart of the first film just aren’t there, but this still feels like a film that honours what came before.

Whether this franchise has a future beyond Uprising remains to be seen, but it feels like it wants to continue with a younger cast, strongly hinting there’s more to come. If Pacific Rim 3 will happen depends on how successful this sequel is, but there’s certainly franchise potential with the world del Toro built. 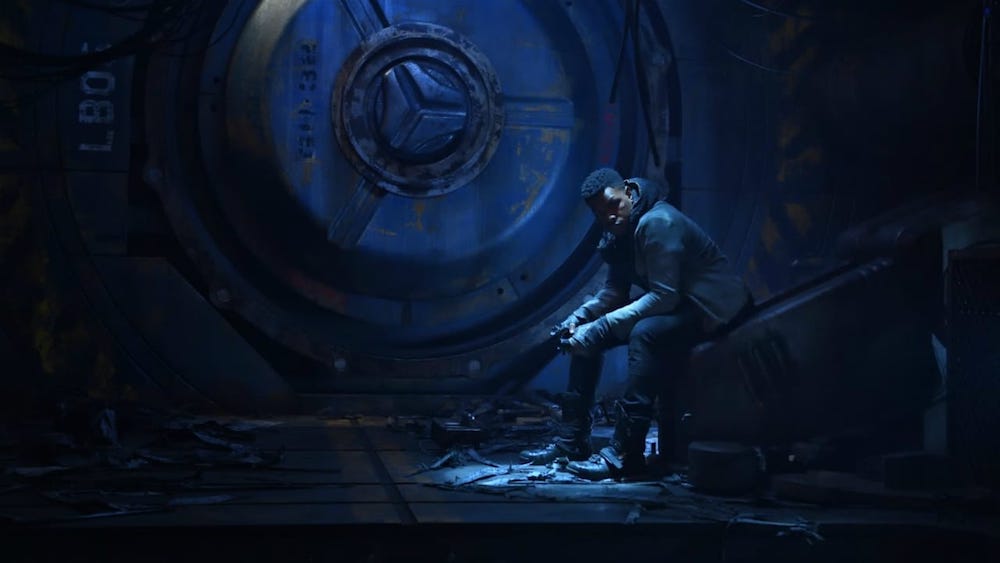 If you’re looking for big screen monster/robot mayhem that’s loud and entertaining without being dumb and boring, like a Transformers movie, you need look no further than Pacific Rim: Uprising. It’s a great blockbuster that delivers everything it needed to. It’s not a carbon copy of the original, as it was never going to be, but it’s a huge amount of fun that manages to find key emotional beats and mine some brilliant humour.

This film, like Boyega, is bursting with a confidence that’s infectious, and it’s the kind of exhilarating cinematic experience that deserves to be celebrated.