In the 1970s, Australian cinema, buoyed by new government funding and the establishment of the Australian Film, Television & Radio school, underwent a renaissance that would later become known as the Australian New Wave; this creative surge would see more than 400 movies produced between 1970 and 1985, including bonafide classics like Walkabout (1971), Wake in Fright (1971), and Gallipoli (1981). Within this movement, a smaller wave of films in the genres of horror, action, and martial arts, also emerged - each with the distinct flavour of Aussie culture. They were later dubbed ‘Ozploitation’ by Quentin Tarantino and documentary filmmaker Mark Hartley (whose 2008 documentary Not Quite Hollywood: The Wild, Untold Story of Ozploitation! is the definitive look at the genre).

Among the most popular of these was Razorback (1984), a creature feature about an oversized wild boar killing and eating people in the outback. After a dry period in the 1990s, Australian horror began a resurgence in the 2000s and continues today. It seems appropriate then that Razorback’s premise would be recycled during this period, in director Chris Sun’s horror movie Boar (2017). And while it doesn’t break the mould, or even do anything particularly original, it’s a solidly entertaining gore fest that makes for a diverting 96-minutes. 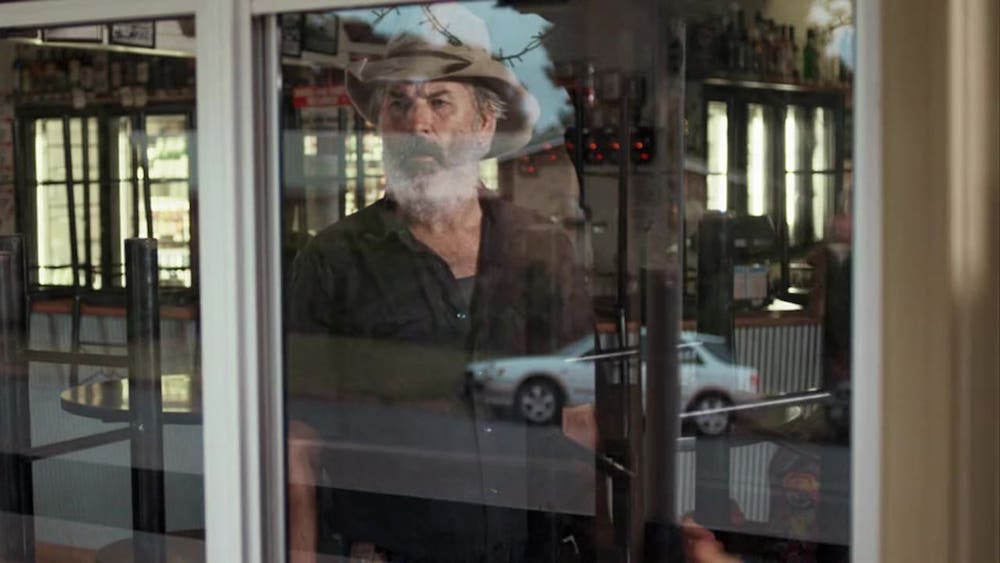 The story concerns Debbie (Simone Buchanan) and her American husband Bruce (Bill Moseley) returning to her outback hometown with their children, Bart (Griffin Walsh) and Ella (Christie-Lee Britten), and her smarmy boyfriend Robert (Hugh Sheridan). They’re all cliched horror stereotypes and, in the case of the ‘alternative’ virginal son, trite to the point of groan-inducing. They’re in town to visit Debbie’s brother Bernie (former WWE wrestler Nathan Jones(, whose impressive physical presence and expressive face add some much-needed charisma to their dynamic. As they arrive in town, we’re also introduced to local curmudgeon Ken (Australian film veteran John Jarratt) and his feisty bar owner daughter Sasha (Melissa Tkautz); their exposition-leaden dialogue mostly made palatable thanks to their chemistry and big Aussie charm.

The main cast introduced, the focus switches to the eponymous boar and a series of violent attacks that make for most of the film’s strongest sequences. Thankfully, Boar doesn’t concern itself with the why or how a wild boar grew to the size of an SUV and developed a taste for human flesh, and that’s definitely for the best! In creature features, these explanations are often contrived and nonsensical and serve to undermine your suspension of disbelief more than anything.

The initial wave of attacks take place at night, in the open expanse of the outback; the brutally rugged terrain, lack of artificial light and feeling of exposure ramping up the tension. The filmmakers seem to have taken a cue from that most legendary of giant animal films, Jaws (1975), in which the vastness of the ocean makes it feel an onslaught can come from anywhere without much warning. When we do see the beast attacking, the darkness makes the perfect cover for using their impressively huge animatronic in gruesome close-up - the boar never looks better than when we see its face in all it’s hairy, toothy, saliva-and-blood-dripping detail. 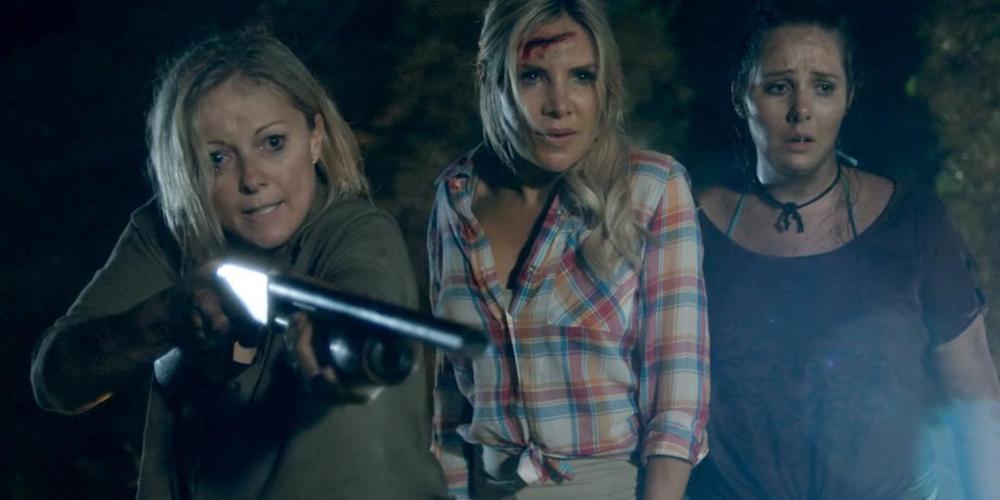 Credit must be given to the sound designers, too, who are equally as important in bringing this creature convincingly to life; the mix giving prominence to it’s grunting and snorting, as well as bone-crunching and flesh tearing. The audio makes the kills hit the right note of viscerally thrilling. Unfortunately, the movie later makes the boneheaded decision to set some of its chases and attack sequences in the day, which not only undermines the tension (how can a giant boar hide and attack from nowhere in broad daylight?) but also sees the beast rendered in truly appalling CGI.

Boar regains its footing in the final act, however, when the focus switches back to the main family and Bernie’s attempts to protect them. The presence of Jones certainly helps here, and his performance, while hardly complex, is big and characterful. He’s by far the most engaging presence after the boar itself. In one barmy but thoroughly entertaining scene, the big man squares off against the boar in a one-on-one, fists-versus-tusks fight that would’ve been impossibly implausible with almost any other actor.

Horror is an overstuffed market at the best of times, and creature features are churned out a dime a dozen by the likes of the Syfy channel, but Boar (with its impressive animatronics, excellent sound design, gory deaths, and palpable tension at times), is certainly a cut above those. It’s no Jaws, suffering from many common complaints of the genre like paper-thin characterisation and clumsy dialogue, but if you enjoyed the likes of Anaconda (1997) or Alligator (1980), you’ll almost certainly get a kick out of Boar. 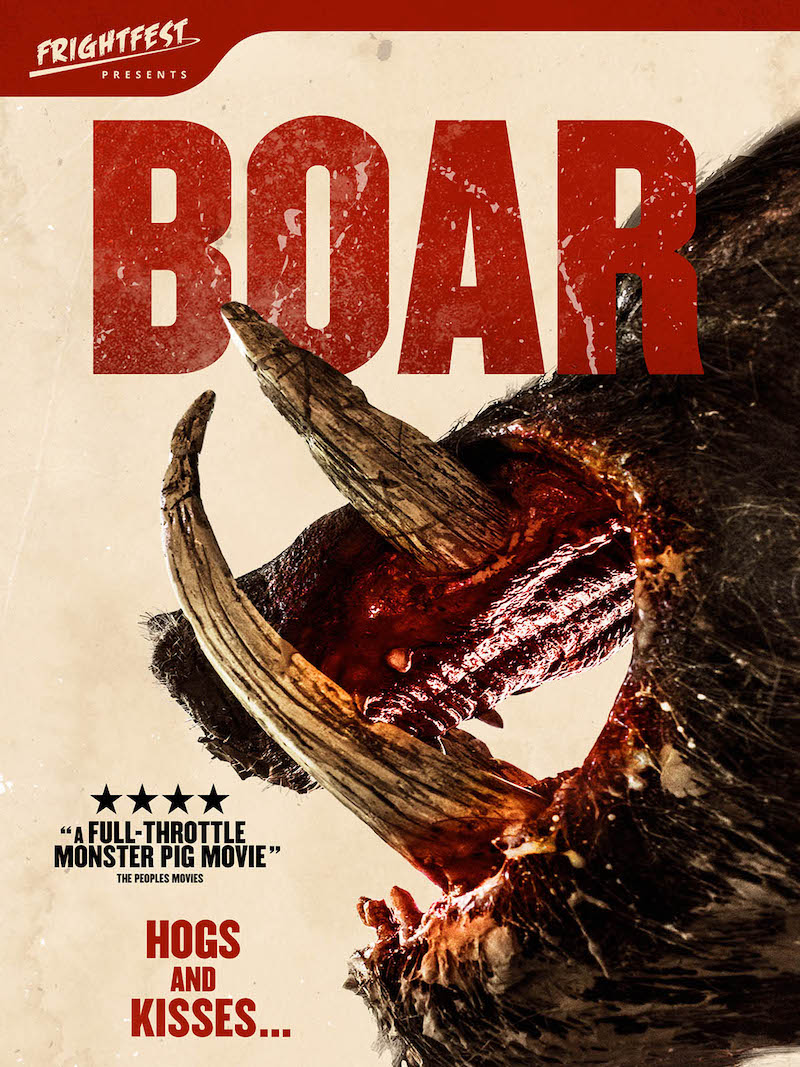