This was one of a handful of films, made in the late 1960s and early-1970s, credited with changing the direction of British Horror, veering away from the dominant Gothic period pieces. Along with the likes of Quatermass and the Pit (1967), Robin Redbreast (1970), Blood on Satan’s Claw (1971), The Wicker Man (1973) and Penda’s Fen (1974), it presented a new kind of unease relying on the interplay of site-specific history and folklore. This has since been termed ‘folk-horror’ and is currently enjoying a renaissance.

The BFI cite Witchfinder General as the “most nihilistic” example of this sub-genre, notorious for its matter-of-fact approach to cruelty, and unflinching examination of the darker aspects of human nature. Dealing with power and corruption against a backdrop of war, witch trials, torture, and execution it makes for both harrowing and compelling viewing. The pre-title sequence, where an unfortunate woman’s dragged screaming to the gallows, is still hard to watch even by today’s standard. The whole film is unpleasant, and if it weren’t for its perfectly paced, uncluttered narrative, it would hold little appeal. 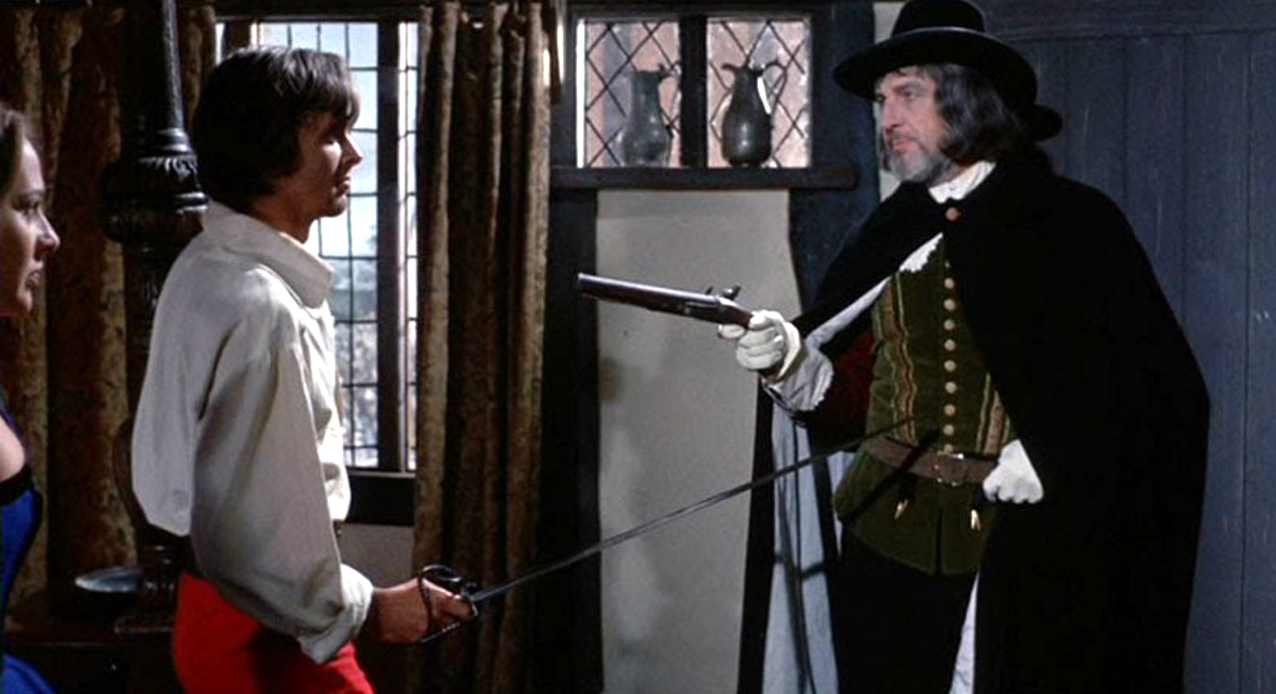 Matthew Hopkins (the self-proclaimed Witchfinder General of the title) was a real man who lived in the first half of the 17th-century. By all accounts he was a genuinely nasty piece of work who exploited the climate of fear and suspicion during the English Civil War for personal gain. Hopkins was the subject of a pop-history novelisation by Ronald Bassett, which came to the attention of producer Tony Tenser, who snapped up the film rights prior to its publication in 1966.

Tenser had already earned some notoriety as a producer of a few sexploitation films set in nudist camps, along with two films for Roman Polanski: the dark and disturbing Repulsion (1965), a ‘no-fun’ study of a woman’s descent into paranoia and madness, starring Catherine Deneuve; and Cul-de-Sac (1966), an unpleasant comedy starring Donald Pleasence. 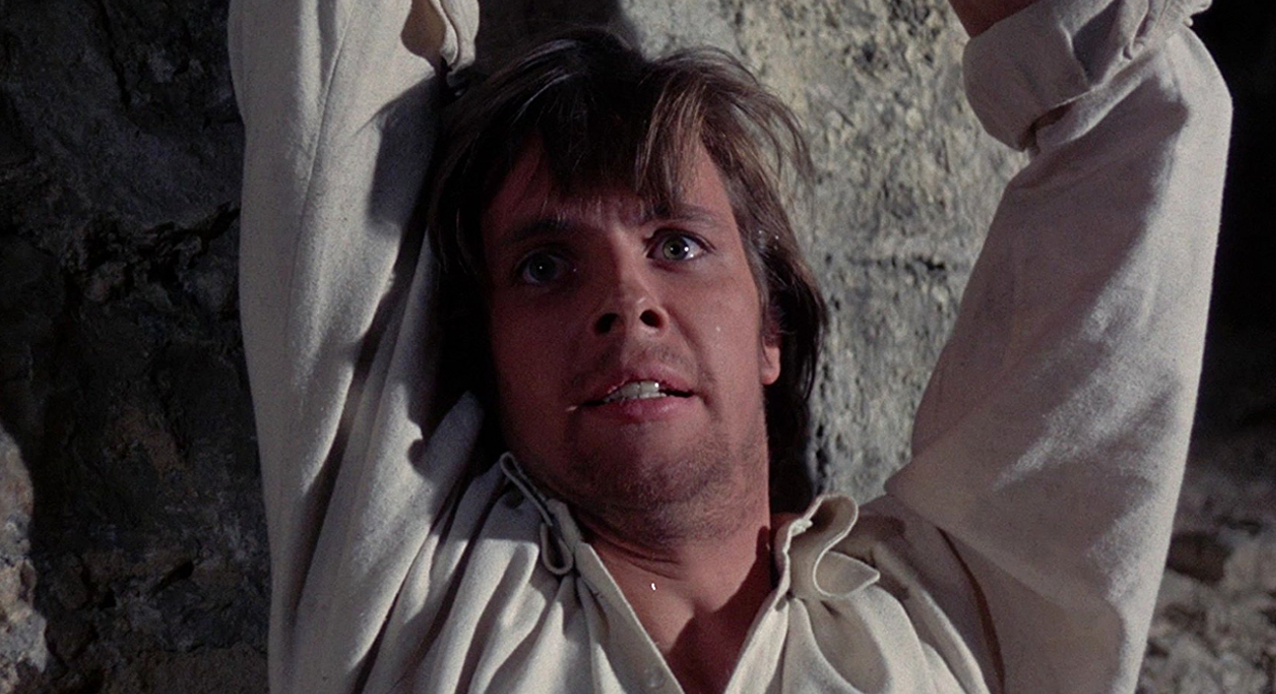 He’d also just co-produced The Sorcerers (1967), the first movie for his newly formed production company Tigon. A contemporary horror with sci-fi elements, it had been adapted from John Burke’s story by Tom Baker and director Michael Reeves, starring Ian Ogilvy alongside horror icon Boris Karloff. Tenser knew that Baker and Reeves worked well together, so he tasked them with writing a Witchfinder screenplay based on Bassett’s book.

When one considers the historical backdrop against which Reeves and Baker were writing their screenplay, it’s easy to understand what might’ve precipitated this shift in the treatment of horror, from romantic fabulism to stark realism. For one thing, I’m not sure they were approaching the story as a genre piece, but perhaps more of a period drama set within the context of a bloody Civil War. 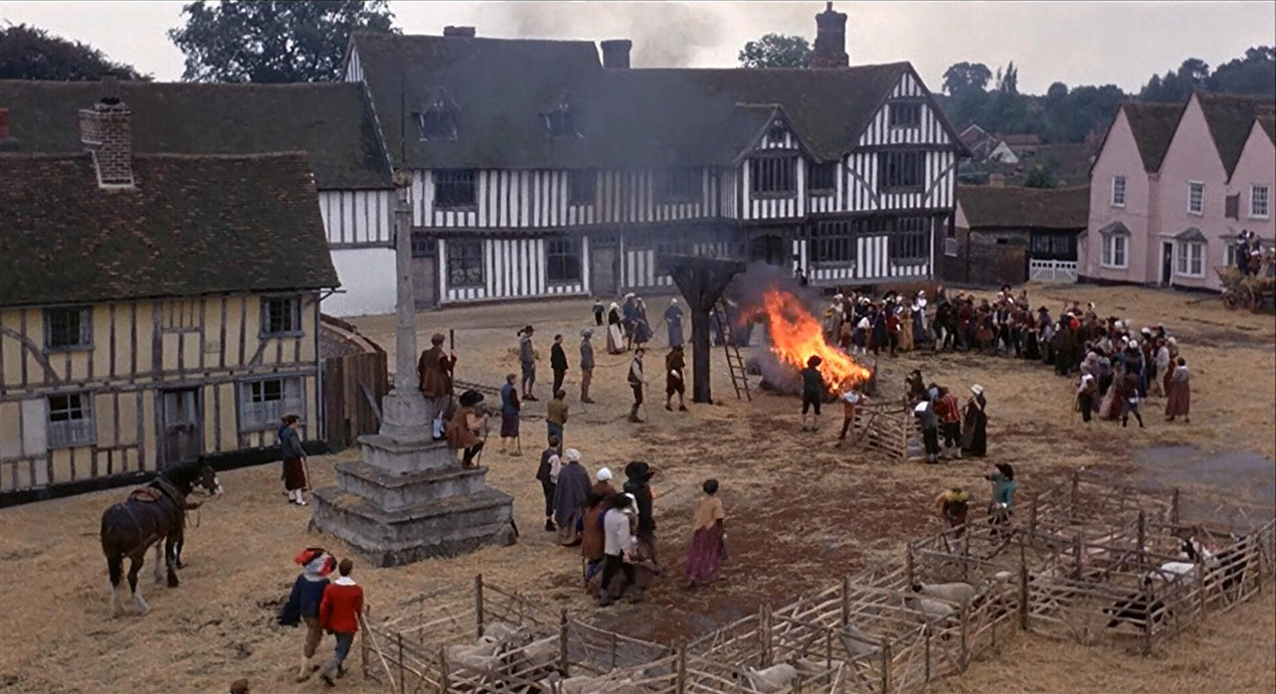 They were distanced from the war between the Royalist Cavaliers and Parliamentarian Roundheads by history, but as they were developing their screenplay another civil war was unfolding in the daily news. The war between the communist North Vietnamese and anti-communist South Vietnam must have seemed closer. For the first time in history, a major war was playing out in daily newspapers and on television, as it happened. Photojournalism from the front-line explicitly presented the horrors of war as the conflict escalated through 1967. This new, matter-of-fact reporting style that detailed executions, assassinations and massacres must have informed their own treatment of the historic backdrop of war and could have been a catalyst for the realist approach they adopted.

Initially they wrote the part of Matthew Hopkins with Donald Pleasence in mind, but when Tenser secured funding from American International Pictures, it came with the proviso that Vincent Price play the part. Reeves and Baker realised this changed the whole dynamic of the characters and began a rewrite. The screenplay then changed considerably through several further versions. 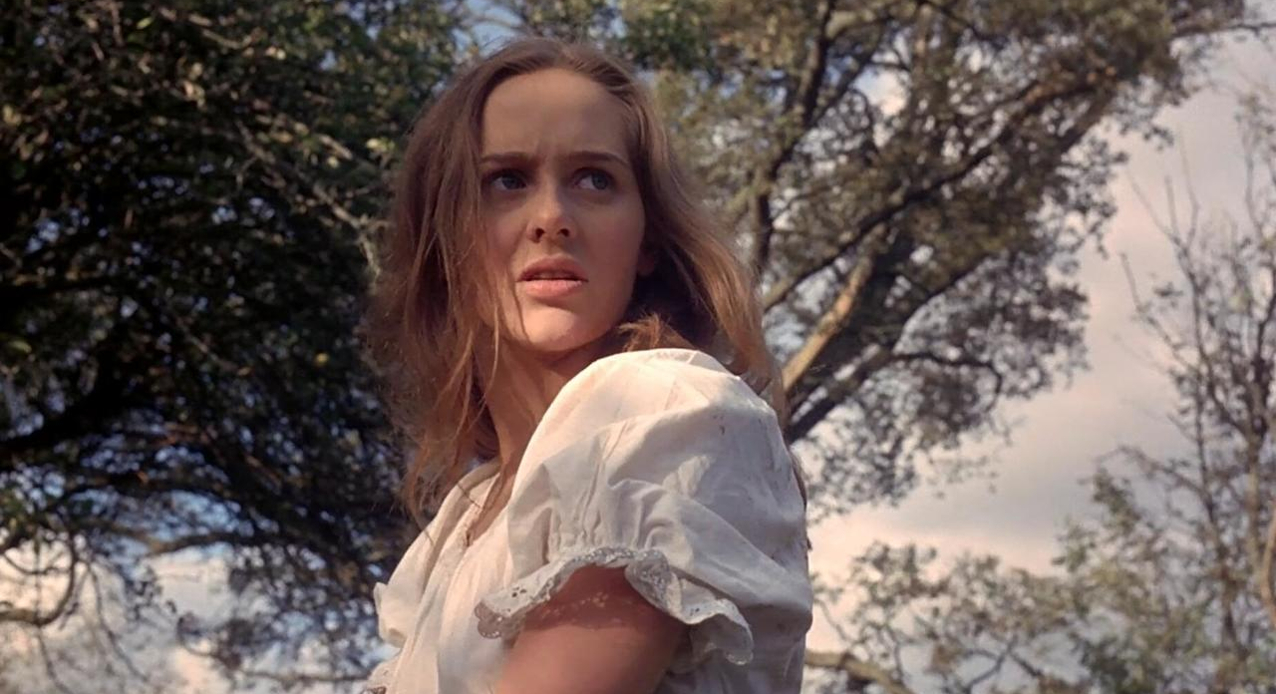 The first completed script was sent to the BBFC for appraisal, in advance of production. The report from the censor was so damning that this version was deemed unviable. A second draft was submitted, and this too was condemned for its apparent celebration of sadism. Tenser also suggested changes to omit extensive battle scenes and large crowds, due to budgetary constraints, and also urged them to include elements to appeal to the Hammer Horror audience, whom he wanted to ‘hijack’. Pressure was mounting to have a script ready before the production window passed them by, so a third, toned-down draft was hastily written.

It has most of the standard horror tropes but twists them all out of shape. There’s certainly a maiden in distress. Hilary Heath (listed here as Hilary Dwyer) plays Sara as a brave young woman, though she remains dependent on the men around her. Firstly, her uncle, the vicar John Lowes (Rupert Davies) who has raised her. Then, Richard (Ian Ogilvy) her betrothed, to whom she will be ‘given’. Later, circumstances force her to use her womanly wiles to appeal to the Witchfinder and his assistant for leniency, when they accuse Lowes of witchcraft. Genre fans may recognise her as Number Seventy-Three from “Hammer into Anvil” , a key 1967 episode of The Prisoner. 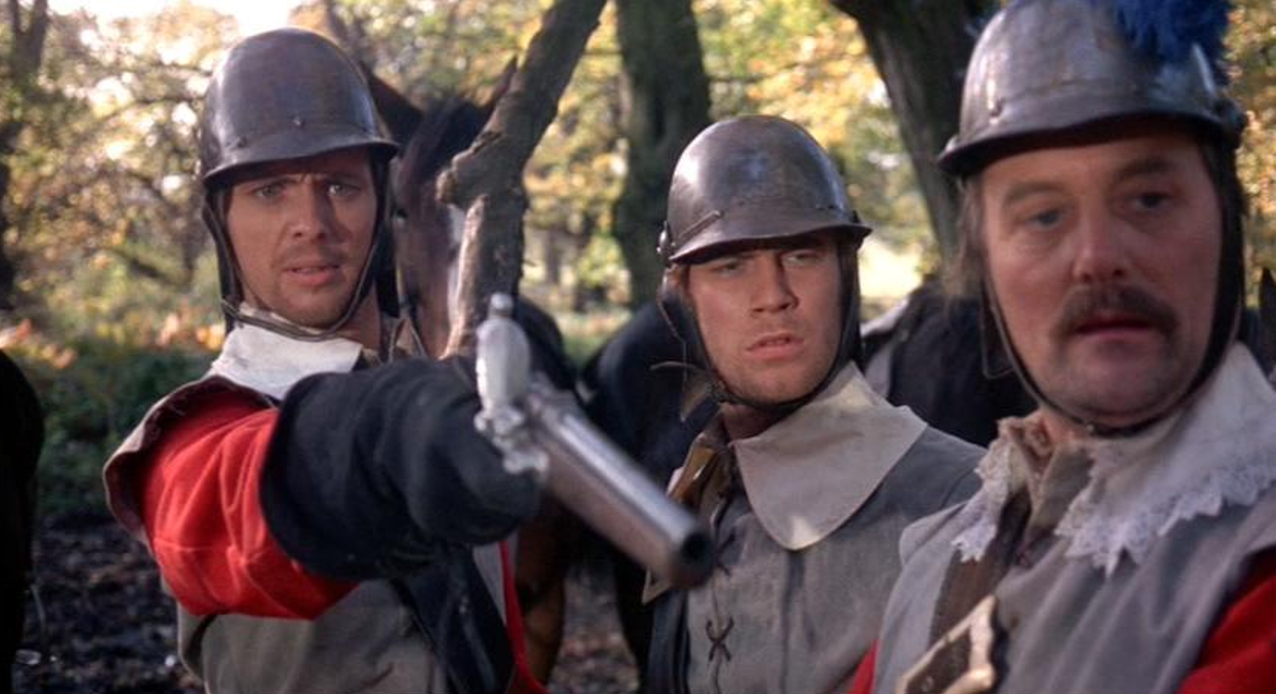 Ogilvy plays his Roundhead soldier, Richard Marshall, as a fairly straightforward hero. The scene that introduces him has further echoes of Vietnam when his detail comes under fire from unseen snipers hidden in the surrounding foliage. His quick reactions save the life of his captain, who will later allow him unrealistic liberty from duty, so he can attempt to rescue Sara and pursue his personal vendetta against Hopkins.

Price’s portrayal of Matthew Hopkins, the Witchfinder, gives us the monster of the piece. He lacks any moral core and seems to be driven entirely by hate, greed, and lust. Apparently, after much friction and falling-out, Reeves convinced the veteran horror legend to rein-in his usual fruity style, dispensing with the ‘tortured-soul’ element he often employs, and leaving us with a performance that’s chilling in its cold restraint. It’s now recognised as a career highpoint for Price. 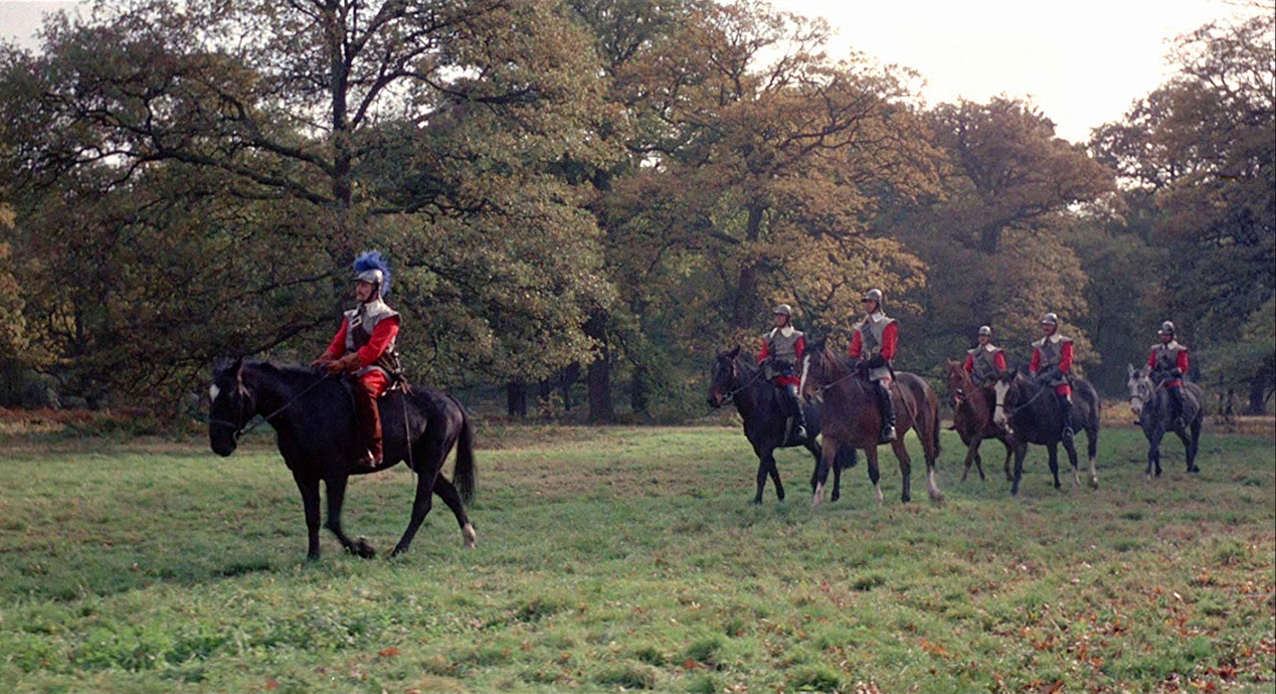 Robert Russell plays Hopkins’ enthusiastically sadistic assistant, John Stearne, as the most detestable kind of bully. He relishes torturing women and brutalising anyone, so long as they’re weaker than himself or manacled to a dungeon wall. But he’ll run sacred if ever faced with a fair fight. Russell will be familiar to cult TV aficionados having appeared in The Avengers, The Champions, Department S, Doctor Who, Space 1999, Blake’s 7, The Feathered Serpent, and many other shows in his long career.

There’s a peppering of gratuitous nudity from some high calibre British ‘cheesecake’ of the time including Margaret Nolan, a Bond beauty from Goldfinger (1964), Sally Douglas of Carry On fame, and Donna Reading, one of Benny Hill’s ‘angels’. Apparently, these scenes were added after the principal photography was completed, directed by Tenser, and without Reeves’ approval. They were intended to appeal to the European export market and were cut from the UK theatrical release. 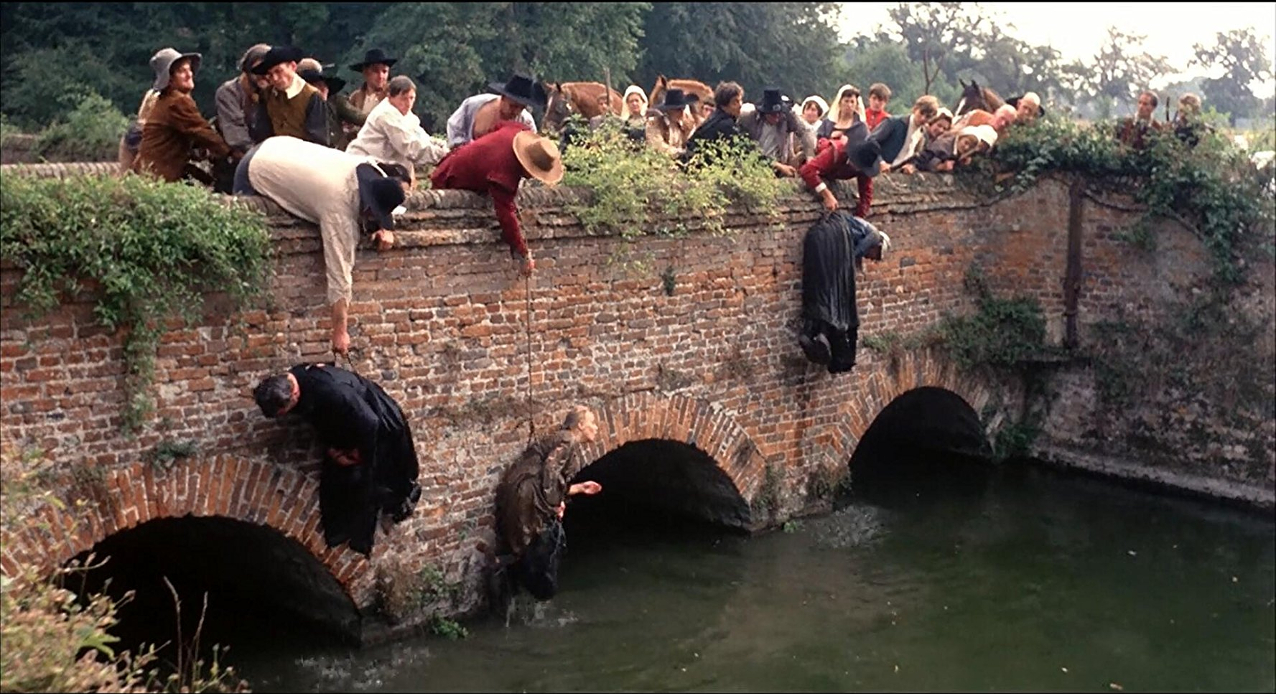 They weren’t the only scenes to be cut. The BBFC insisted on trimming what it considered to be excessive “sadistic brutality”—this included Stearne beating a chained-up woman, the prolonged torture of Lowes by pricking, shots of Sara’s reaction to torture, and the hacking of Hopkins when he finally gets his much-deserved comeuppance.

Though the violence and cruelty marked the film apart from the mainstream of the time, perhaps the most striking visual element is the use of landscape as a passive witness throughout. Co-writer Tom Baker had envisaged that the story be rooted in the English landscape from the start. Perhaps with one eye on the budget, the film was shot almost entirely on location, and this necessitated a tight schedule to squeeze-in shooting before winter weather encroached. Filmed in 1967, as summer turned to autumn and everything was getting a bit tired and weary, it has an austere realism that’s certainly not tourist brochure stuff. 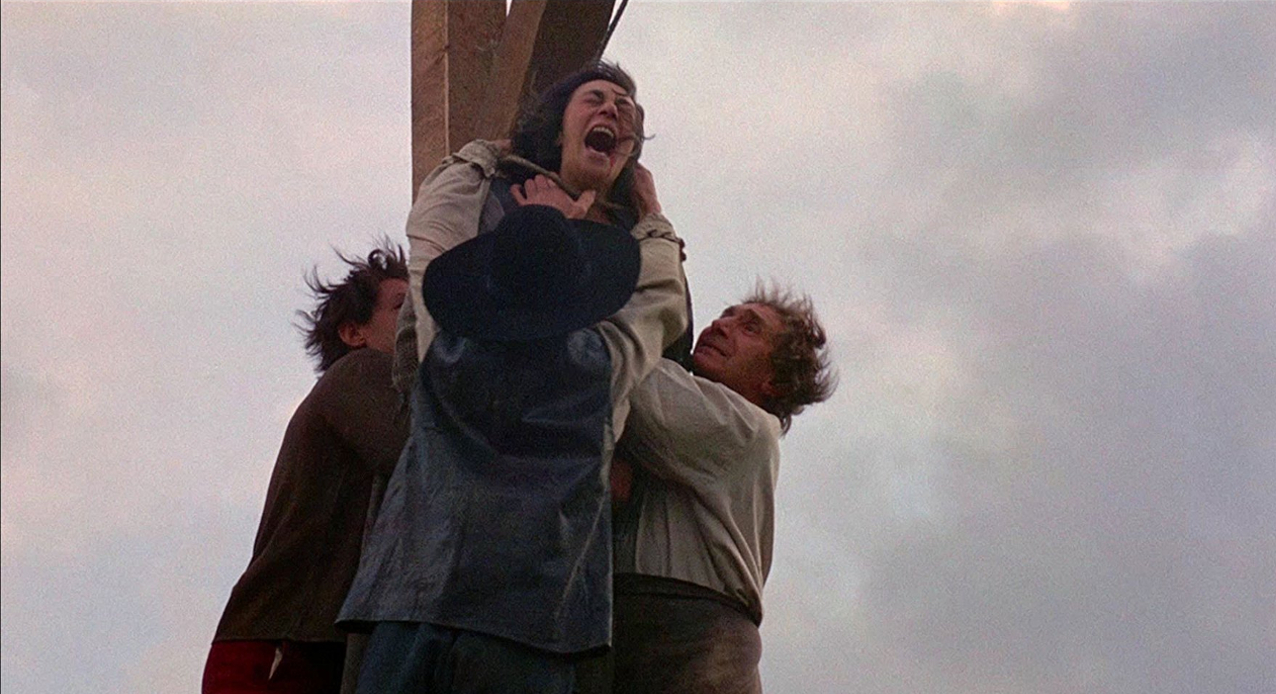 I’m not wholly convinced that the bleak, colour-drained scenery was really the look Reeves was after. There are some striking compositions, and dynamic shots of horses charging through the countryside, but much of the cinematography is flat and lacklustre. Some of the day-for-night sequences are terrible and it’s difficult to make out what’s going on. Which is surprising, given that he honed his skills as second unit director on The Long Ships (1964) for Jack Cardiff, regarded as one of the greatest cinematographers. Perhaps the relatively meagre budget, or the interruption of a technicians’ strike, could have been to blame.

Undoubtedly, Witchfinder General is an important film, but it’s far from perfect. It’s certainly brave in its totally unglamorous depiction of violence. It prefigures the bleak tone that would taint many a film of the 70s, making endings less predictable for a while. It earned Michael Reeves, just 25-years-old, the reputation of a fearless young director with great promise. Unfortunately, that promise was to remain unfulfilled. Within a year of its release, he was dead from an overdose of barbiturates, which had been prescribed as a treatment for insomnia.