Who knew that a hand in a sock would become one of the most entertaining creatures on earth? Kermit the Frog’s “origin story”, The Muppet Movie, turns 40 this year. A musical comedy road show starring felt puppets, it was a technical triumph for the Muppet’s creator, Jim Henson, and was an immediate hit. “We know that it’s probably magic”, but how did it begin?

By the time the movie premiered in 1979, Jim Henson had gained over 20 year’s experience developing the Muppets. Born in Greenville, Mississippi, Henson’s creativity was nurtured by his maternal grandmother who loved to paint, quilt, and sew. In 1955, he began creating so-called “muppets” (including an early version of Kermit) for a local television show called Sam and Friends at the University of Maryland, with fellow student and future wife Jane Nebel. TV appearances of the Muppets soon followed, on The Steve Allen Show and The Jackie Paar Show, as well as numerous commercials. 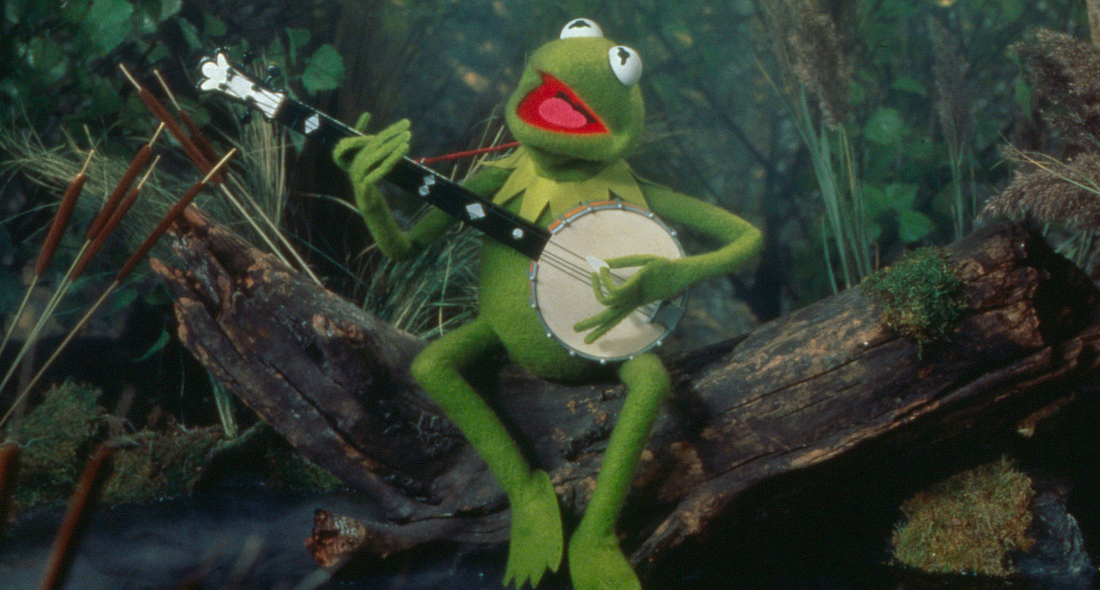 In 1963 the Henson’s moved to New York, where they recruited a young puppeteer called Frank Oz and developed a character called Rowlf the dog for the Jimmy Dean Show. Oz had been taught puppeteering by his parents, plying his craft to finance a trip to Europe and, as a teenager, he’d met Muppet Show writer Jerry Juhl at the Oakland Recreation Department’s Vagabond Puppet Theater.

At this point, Henson was approached to create a whole cast of Muppets for a ground-breaking children’s education public broadcast show: Sesame Street. The long-running series premiered in 1969 and won three Emmys during its first season. Oz became the voice and puppeteer for notable characters like Grover and Cookie Monster, while Kermit (voiced and performed by Henson himself) quickly became one of the most recognisable TV characters in the world. Sesame Street’s success was instant and continues to this day.

Convinced the Muppets could reach a wider family audience, Henson pitched a vaudevillian series to CBS and ABC, but neither was interested in The Muppet Show. However, British TV producer Lew Grade agreed to make the show through his company ATV at Elstree Studios, and The Muppet Show hit UK airwaves in 1974. It starred the now-familiar Kermit, plus a collection of Muppet characters, old and new, all playing host to famous guests. Everyone from Julie Andrews and Charles Aznavour, Shirley Bassey and Harry Belafonte, and Bruce Forsyth to Rudolf Nureyev agreed to appear on The Muppet Show during its seven-year run until 1981. 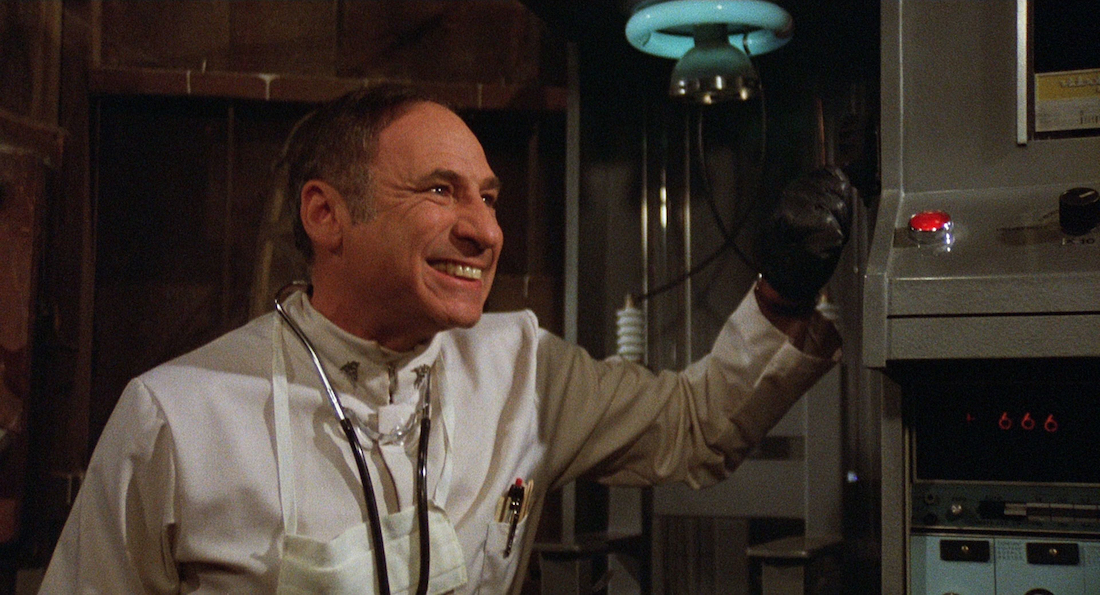 Henson then wanted to turn The Muppet Show into a full-blown Broadway stage production, but his ambitious plan evolved into a more revolutionary feature film idea: The Muppet Movie. Test footage of the Muppets out in the real world (such as Kermit and Fozzie perched in a tree) demonstrated how hilarious the end-result of this complicated process would look on screen, to audiences accustomed to never seeing below a puppet’s waistline.

The Muppet Show’s Jerry Juhl co-wrote the film’s screenplay with Jack Burns—the voice of Ralph Kane, reactionary neighbour to Harry Bosley in classic animated comedy series Wait Til Your Father Gets Home (1972–4). James Frawley, who’d worked on 1960s TV series The Monkees and instalments of Columbo, then joining the production to direct. 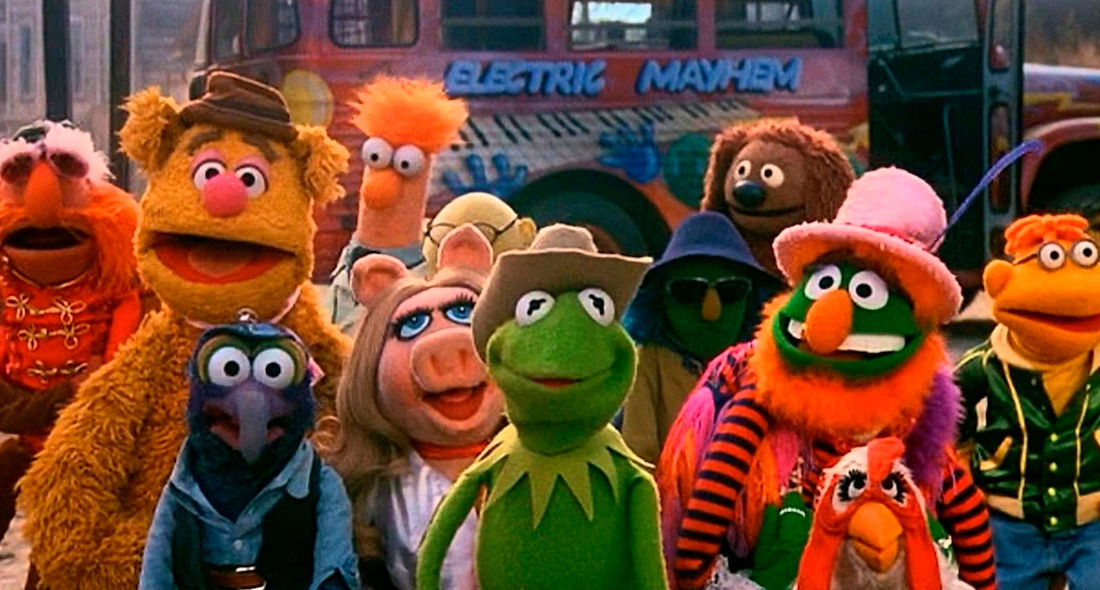 Jim Henson produced the movie, developing new techniques to bring the Muppets to more vivid life—including seeing Muppets with legs for the first time! Kermit the frog was seen sitting in a swamp playing the banjo (Henson was in an underwater chamber to achieve this feat), riding a bicycle (operated by a puppeteer from above on a crane), and dancing with Fozzie Bear in El Sleazo café. Even Sesame Street’s Big Bird made a cameo appearance, hitch-hiking to New York to make it big in public television (the impressive puppet operated by someone who reached chest height and peered through a TV screen while using a radio mic to operate and navigate the big yellow bird).

Francis Ford Coppola said of Jim Henson that “he used technology as a friend” and was “a true innovator”. Henson had written, storyboarded, and directed an experimental short film called The Time Piece (1965) which premiered at the Museum of Modern Art, so he’d long been fascinated by motion pictures and wanted to prove that Muppets could perform on the big screen to further expand his vision. The Muppet Movie was a cinematic milestone, using the most advanced puppetry techniques to date, at a time when a new era of VFX was getting started. Following The Muppet Movie, Henson went on to work with George Lucas on his iconic Star Wars movies—creating both the Yoda (voiced by Frank Oz) and Jabba the Hutt puppets. 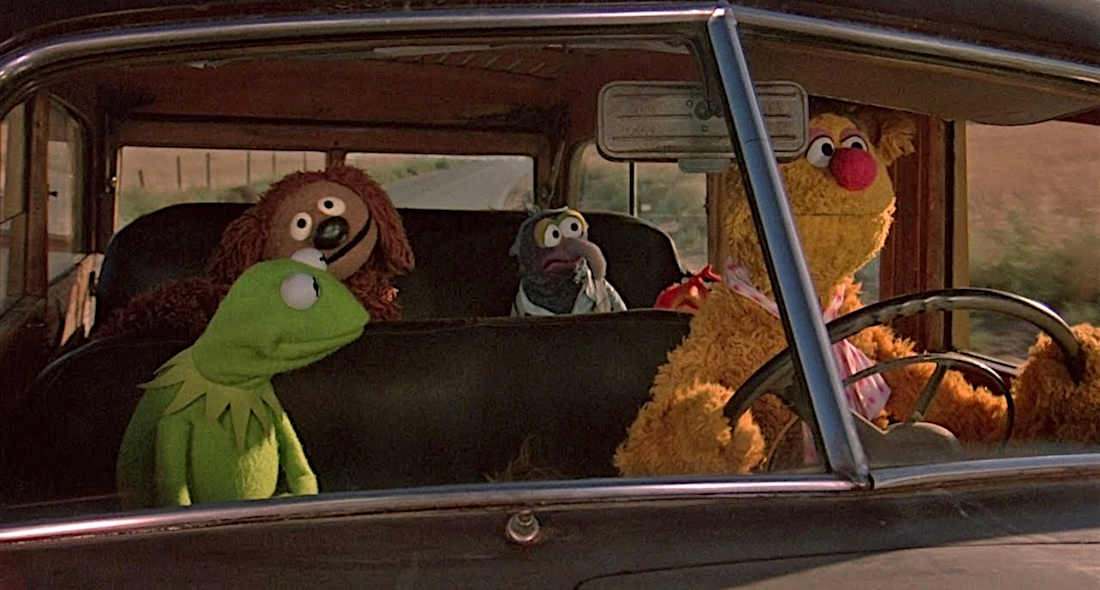 The Muppet Movie starts with the chaotic Muppets settling down with us to watch their own movie premiere, so it’s already being playful with the medium and breaking the fourth wall. On the screen, we zoom in on Kermit in a swamp singing the always emotive “Rainbow Connection”, before a talent scout tells him his voice could make millions of people happy. And so Kermit begins an odyssey to Hollywood, collecting together the other Muppets (Fozzie, Gonzo, Miss Piggy, et al) and facing his nemesis Doc Hopper (Charles Durning)—who wants Kermit to promote his Frogs Legs restaurant franchise. “All those frogs on tiny crutches,” Kermit shudders. They eventually make it to Hollywood to be given the standard rich and famous contract by Lew Lord (Orson Welles), then produce a version of their adventures with a reprise of the “Rainbow Connection” song—a film-within-a-film breakdown reminiscent of how Mel Brooks’ Blazing Saddles (1974) ended.

Jim Henson, Frank Oz, Jerry Nelson, Richard Hunt, and Dave Goetz (the core voices and operators of the Muppets) were joined by over 100 new puppeteers for the 1979 movie—including a young Tim Burton! Everyone has to stand in trenches 6′ deep and 17′ wide, in order to shoot the finale which included a full cast of 250 puppets. 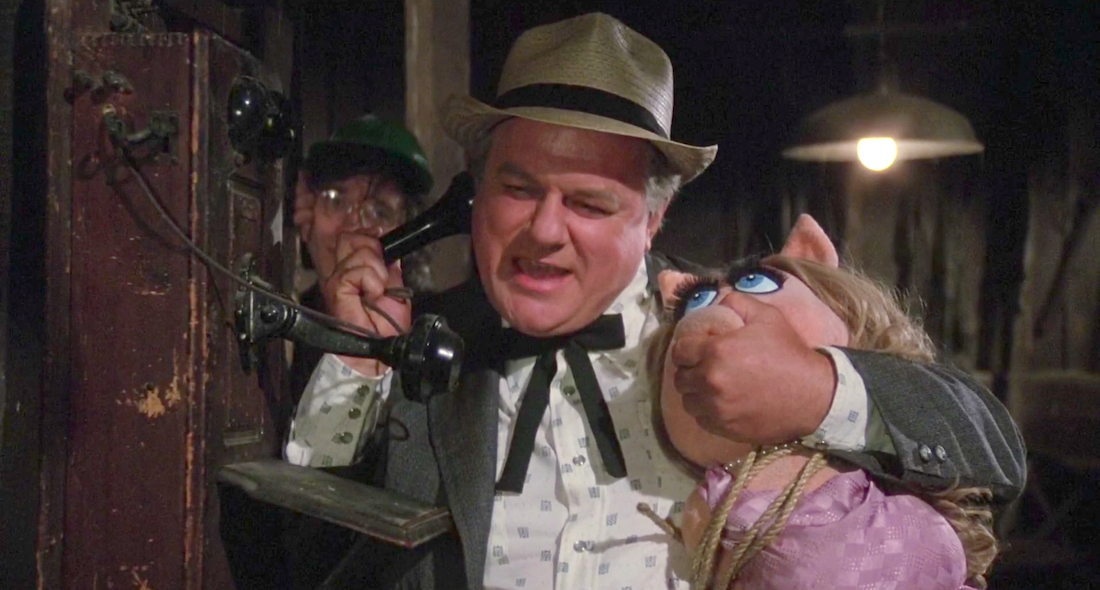 The movie also boasted a dizzying list of famous cameos. James Coburn played the owner of the El Sleazo café, Bob Hope was an Ice Cream Vendor, Richard Pryor appeared as a balloon salesman, Steve Martin is the wine waiter dressed in lederhosen, and Mel Brooks was the bonkers Professor Max Krassman! Ventriloquist Edgar Bergen and his own puppet, Charles McCarthy, much admired by Henson in his youth, also played the judges at the County Fair in their final on-screen performance. Henson even dedicated the movie to Bergen following his death.

The movie has sight jokes, slapstick, puns, and breaks the fourth wall on several occasions, such as when Dr Teeth is handed a copy of the script by Kermit and Fozzie to fill him in on their backstory. The progressive and tolerant approach of the Muppets means the humour is still wacky but remains relevant for modern audiences, unlike many other comedies made in the 1970s that are now dated and politically incorrect. 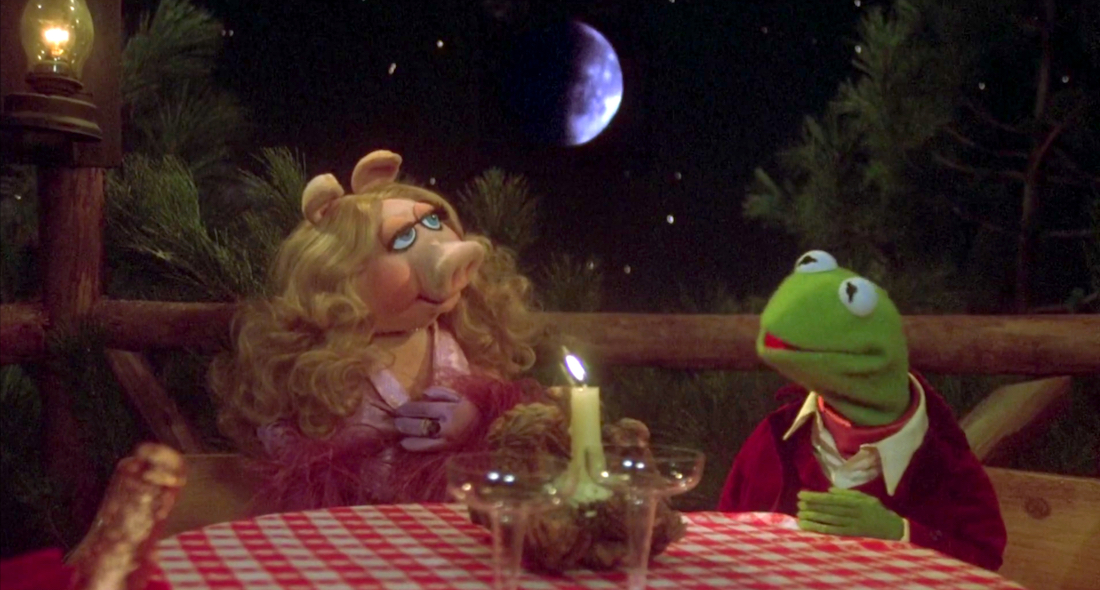 The balance of quirkiness and fun, but always with a big heart, is what we expect from the Muppets. Who can fail to laugh yet be charmed by the love at first sight sequence between Miss Piggy and Kermit, or moved by Kermit talking to his own conscience in the desert? The latter ranks as one of my most favourite scenes, while the band of hopefuls camping out under the stars and Gonzo singing “there is no word yet, for old friends who’ve just met, part heaven part space, or have I found my place…”

The integrity of the script, the interactions of human actors with the Muppets (whose voices and limited facial expressions still convey a wealth of feeling), ensures you’re on that journey with them… and what an uplifting one it is. The basic decency of the Muppets and the inspirational message of the film is at the core of Jim Henson’s personal philosophy. He, like Kermit, had a dream “about making people happy—and the more people you share that with, the better it becomes.” 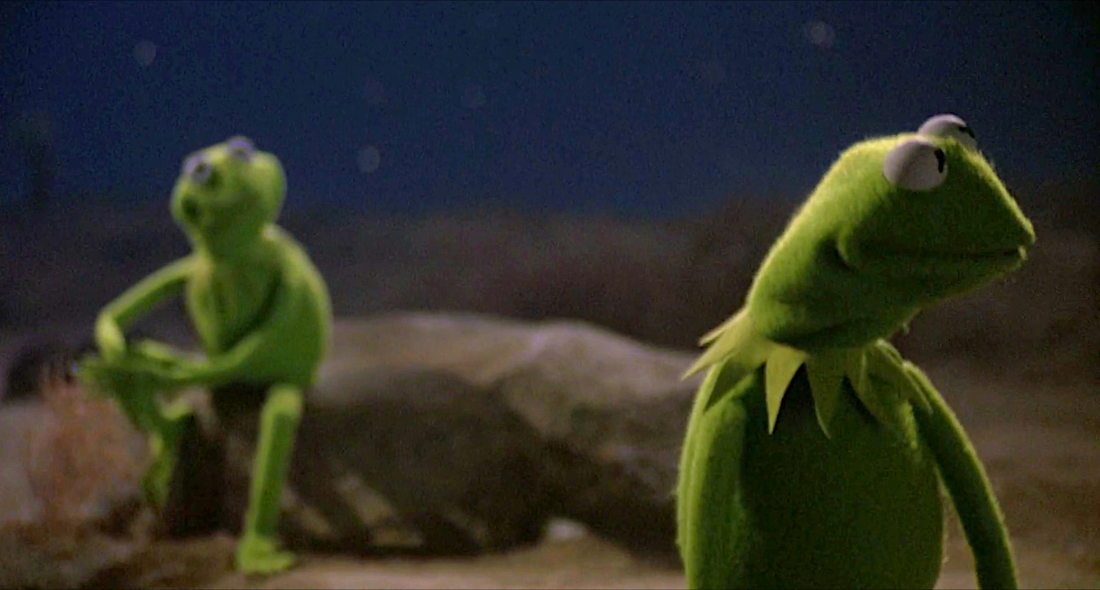 The movie was a huge success. It grossed over $76M on a budget of around $8M, and paved the way for a number of sequels over four decades: Jim Henson’s The Great Muppet Caper (1981) and Frank Oz’s Muppets Take Manhattan (1984) completed the classic early “trilogy”; Brian Henson’s The Muppet Christmas Carol (1994) and Muppet Treasure Island (1996) moved the idea into the realm of parody; Tim Hill’s Muppets from Space (1999) appeared to end the franchise; and then James Bobin revived the characters to great success with The Muppets (2011), and moderate box office with his Muppets Most Wanted (2014) sequel.

The Muppet Movie’s success allowed Henson to fund and develop a project close to his heart, the epic fantasy The Dark Crystal (1982), which the Jim Henson company and Netflix are about to release a prequel TV series for.

The song “Rainbow Connection” (written by Paul Williams and Ken Ascher) was nominated for Academy and Golden Globe Awards and has since been covered by the likes of Willie Nelson, the Dixie Chicks, and Gwen Stefani. Debbie Harry even duetted with Kermit in 1981 and ditto Ed Sheeran for the US Red Nose Day in 2015. Other songs, such as “Moving Right Along” and “I’m Going to Go Back There Someday” were also written for the movie by Williams and Ascher, the former of whom made a cameo appearance playing the piano in the El Sleazo Café.

Kermit’s ability to collect a band of dreamers together who can “hold onto love like invisible strings” mirrors his creator’s own genius. Jim Henson worked tirelessly to realise his vision, meet each challenge, and perfect his craft, but he was also “a harvester of people who cared about what they do” and nurtured talent to achieve their best. 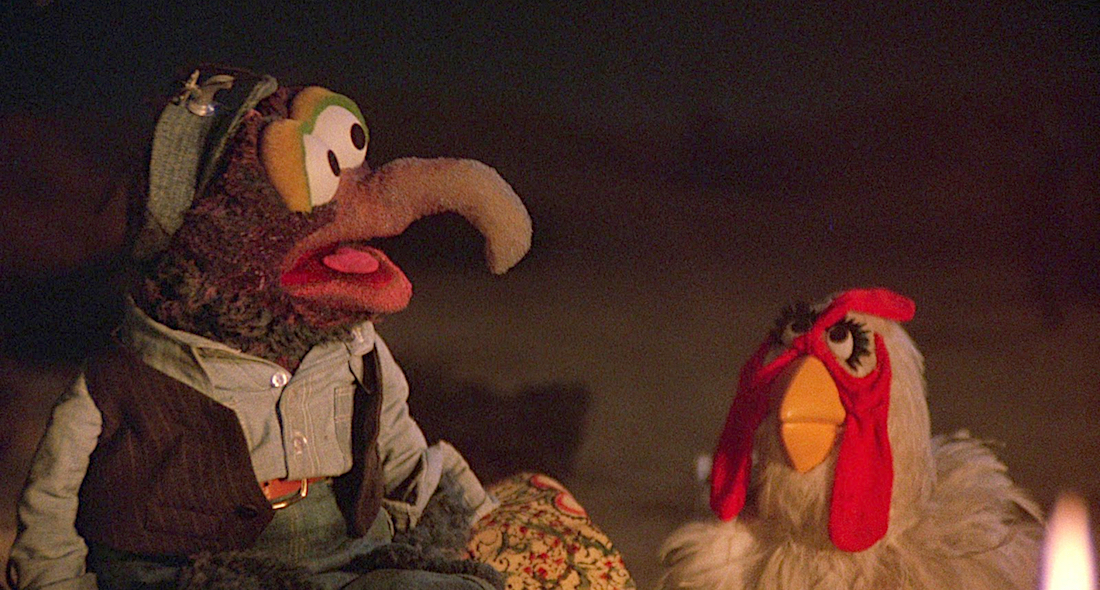 Henson’s tragic death in 1990 from toxic shock syndrome and his wife Jane’s passing in 2013, has left his five children to continue the Henson Foundation and the Muppet’s fine tradition. At his memorial service, they read from Henson’s own words about how he wanted to make a difference in the world and leave it a little bit better. He certainly achieved that.

It seems fitting that, during The Muppet Movie’s 40 year anniversary, a Sesame Street road trip is also rolling across America to celebrate 50 years of the Muppets educating and entertaining children. Now broadcast in 150 countries and in 70 languages, Jim Henson’s legacy is still “moving right along” to this day.

This anniversary is an opportunity to re-watch or introduce someone new to The Muppet Movie. Kermit the Frog may have started out in a stinky swamp, but now he’s got his own star on the Hollywood Walk of Fame! Jimmy Juhl said in his tribute to Jim Henson that he was a dreamer and that the words of the “Rainbow Connection” truly described his beautiful vision…

Life’s like a movie, write your own ending, keep on believing, keep on pretending, we’ve done what we set out to do thanks to the lovers, the dreamers and you…