Fans of The Dark Crystal have never had it so good! After waiting 35 years for another story from the wondrous world of Thra, an official comic-book series, The Power of the Dark Crystal, was launched last year, adapting the screenplays for unproduced movie sequels. Shortly after that, Netflix announced that a new 10-part series was going into production! The new series, The Dark Crystal: Ages of Resistance, is set to air later this year and will use the Henson puppetry approach mixed with cutting-edge digital effects. It will be a prequel charting the Gelfling uprising that occurred before the events of the 1982 original. And now, there is a handsome new edition from Sony Pictures Home Entertainment in sumptuous 4K Ultra HD, taken directly from original camera negatives and fully restored.

For many, The Dark Crystal is a beloved icon of their childhood. A film that drew them into another world, fuelled their imaginations, thrilled them… and gave them recurring nightmares. It was a Wizard of Oz for the fledgling millennial generation. I was in my late-teens when I first saw it, so was okay with most of the rather intense content but, be warned, for a PG film populated with puppets, it contains pretty dark themes and genuinely disturbing imagery. That’s probably why I love it so much!

Perhaps because The Dark Crystal is such an unusual film, it’s stood the test of time and looks as amazing as it ever did, and just as quirky. If you haven’t seen it before, then I’m not sure how to sum it up. It’s a fantastic example of world-building, on par with the Lord of the Rings and Hobbit movies, but much better paced. It feels like you really get to know the world of Thra and its mythic history in just 93-minutes—somewhat shorter than modern fantasy audiences have been conditioned to expect!

The unique world it conjures holds together as a cohesive reality much better than most I can think of, except perhaps The NeverEnding Story (1984). In many ways, it’s an even greater feat of imagination, as every element of its mythos, every animal and plant, every detail of all its characters, was created from scratch and there are no humans to be seen. It’s probably so effective because it was written to be a film, not adapted from literature.

It’s an epic fantasy with strong Gothic undertones from the imagination of Muppet maestro Jim Henson. Back in 1976, Henson started developing ideas for a serious fantasy film that could build on the techniques he was using for the first series of The Muppet Show. He was aware of the fantasy art of British illustrator of Brian Froud, and made contact with him to suggest a possible collaboration. The following year, they sealed a deal to develop a film together.

Their approach to pre-production was unusual, too. For one thing they took their time over it; nearly six years from initial ideas to premiering the finished film. To begin with, Froud and Henson created the world. They mapped it, they evolved its flora and fauna, they populated it with creatures and characters. And as the world took form, so the stories began to grow from it.

The look was very much influenced by Froud’s artwork and the Devon landscape that surrounded him. Henson would come up with ideas for the characters, describe their psychological and spiritual aspects and what they had to do in the story. Froud would then draw them. The drawings would be taken to the art department and maquettes would be modelled, adapting the designs where necessary.

There’s really no need for me to go into exhaustive detail about the production process. Pretty much all you want to know, about the making of this movie, is covered in an excellent array of extras with the new Blu-ray release. The 1983 archival documentary The World of the Dark Crystal includes interviews with Jim Henson, Brian Froud, his wife and puppet-maker Wendy Midener Froud, producer Gary Kurtz (of Star Wars fame), co-director Frank Oz, puppeteer Kathryn Mullen, and others. It takes us behind-the-scenes and details the development from the first strokes of the pencil to the final cut.

What quickly becomes apparent is the passion and dedication of all involved. It may be known as Jim Henson’s The Dark Crystal, but he was far from an auteur or a dictator-director. It seems his strength lay in encouraging the creative talents of those around him. Everyone speaks about how valued they felt and how contagious his enthusiasm was. He ensured the production was most definitely a collaborative effort with all involved. They felt empowered to pitch-in with ideas and concepts, and the result is all the richer for that.

The unbound imagination in the character designs pushed the boundaries of what was achievable. New animatronic techniques were devised, new materials experimented with, and new kit developed. Let’s take the Skeksis for example. They’re the villainous creatures that look like a hybrid of dinosaur, vulture, and dragon. To make them believable, new methods were required to make their lips, brows, eyes, and hands mobile. It ended up taking five or six operators for each of the Skeksis. There were two actually in the suit, both using a specially designed mini-monitor to see what was going on, so they could react to other characters and move the head in the right directions. Then, crawling around the hems of their grand gowns, were three or four more puppeteers controlling hands and other aspects. The facial expressions and eye movements were radio-controlled by another operator. The mind boggles at the logistics of moving all those people around when there were nine of the creatures all dynamically interacting, without causing injury or being in shot!

Seeing the physical demands upon the performers really helps one appreciate the dedication it took to make the puppets work. They don’t merely function, the move smoothly, they’re expressive, they actually perform. They end up being as emotive and believable as many human players! This is the heart of the film’s success—you soon forget you’re watching puppets. For me, this was a problem with Henson’s follow-up Labyrinth (1986). Much as I am a huge fan of both David Bowie and Jennifer Connelly, the juxtaposition of the human talent with the puppet performers drew negative attention to the illusion. That’s what The Dark Crystal successfully pulls-off: a grand illusion. There are little or no ‘special effects’ in the film. Everything we see was actually there, in front of the lens, acting in real-time. What would now be done with digital effects was achieved with miniatures and matte paintings on glass, merged with live-action.

Originally, the villainous Skeksis and the spiritual Mystics had their own languages, but when this confused audiences during several ill-fated test-screenings, screenwriter David Odell wrote a ‘translation’ of their dialogue to match their mouth movements and mannerisms, which was then overdubbed. In a fascinating bonus feature, he explains the process and introduces the original scenes with their ‘alien’ languages. I can see why they changed them, some of those scenes were a little baffling and also much more frightening. The death of the Skeksis Emperor is already pretty scary as his face crumbles to dust and his body collapses into his deathbed. When this happens amid barbarous growls and shrieks it becomes quite grotesque. Likewise, the sequence when the gentle Podlings have their life-essence drained to make an elixir for the new Emperor, their cheeks sucking in and their eyes turning zombie white… well, that’s pretty intense stuff! Certainly, younger viewers need the scant comfort of an explanation.

The extras made for the 25th anniversary DVD release in 2007 are all included here. There are two featurettes looking back on the production with contributions from Brian and Wendy Froud, Brian Henson, and Kathryn Mullen. There are also informative anecdotes and reminiscences making it feel like a Dark Crystal convention with a great guest line-up. To celebrate the new Blu-ray restoration and 4k Ultra HD debut, there is also a new featurette called The Myth, Magic and Henson Legacy that looks back on the production, placing it to a context for today.

The meticulous storyboarding was absolutely essential to iron-out as many technical problems as possible before shooting. Often the artists would suggest angles or actions that just weren’t possible with the limited movement of some of the characters. The puppeteers would feedback to the artists and they would adapt as necessary. The Blu-ray documents this with a picture-in-picture storyboard comparison, and there is an audio commentary from Brian Froud.

It used to be expected that a good quality DVD or Blu-ray would have a booklet, or a set of postcards, or some sort of little extra insert. Sadly, this seems less common as companies cut corners. This Blu-ray package does include a handsome booklet, just as such celebratory collectors’ editions should! A section looks at the creative approach of Jim Henson, with some pages from his notebooks where we see him working out character names for the ‘oo-urs’, which we know as ‘Mystics’, and the Karackt who became Skeksis. There is a timeline of the production, with some nice behind the scenes shots, storyboard panels and set designs. Eight pages cover the mechanical effects and character design, with concept art and a few design sketches for Gelflings, Mystics and Skeksis. There’s also little bit about the development of poster and promotional art. To fit in the case, it is necessarily small, but at 30 pages it is a lovely little bonus. It’s nicely done and satisfyingly glossy, though to fully appreciate some of the images, I did resort to a magnifying glass.

The Dark Crystal was a great cinematic achievement. It introduced new mechanical effects that were used in the first Star Wars trilogy, to bring Jabba the Hut and Yoda to life. Henson would use techniques innovated for The Dark Crystal in Labyrinth, the later Muppet movies and The Storyteller (1987) TV series. Although The Dark Crystal didn’t test well, and its budget spiralled from its initial $13 million to $25 million, it opened to a warm critical reception and was immediately welcomed by genre fans, winning a couple of festival awards. It was a slow-burner at the box office, however, losing much of its audience to E.T: The Extra-Terrestrial (1982). And, shortly after release, it began to draw negative criticism for its unexpectedly dark themes. Some parents expected something similar to the Muppets and resented its traumatising effects on younger children. It did earn a respectable profit, returning $40 million and pushing into the US top 20 for the year.

Now, 36 years on, it’s loved by legions of loyal fans. They will now be rewarded, not only with this new 4K restoration, but with the beautiful ongoing graphic adaptation with art by Kelly and Nicole Matthews, written by Simon Spurrier based on screenplays by David Odell, Craig Pierce and Annette Duffy. There’s even a new board game from River Horse. They will also be excited by the forthcoming Netflix series with Louis Leterrier (Now You See Me, The Incredible Hulk) at the helm. The Dark Crystal: Age of Resistance will be produced by The Jim Henson Company as a Netflix original series. Leading the writing team are co-executive producers Jeffrey Addiss and Will Matthews (Life in a Year), with Javier Grillo-Marxuach (Lost, The 100).

Netflix has a deep respect for my father’s original work and the many people it inspired. They are the perfect partners to create this next epic chapter in The Dark Crystal story for new fans and the loyal fans who have waited so long for more adventures from this world.

I look forward to it! 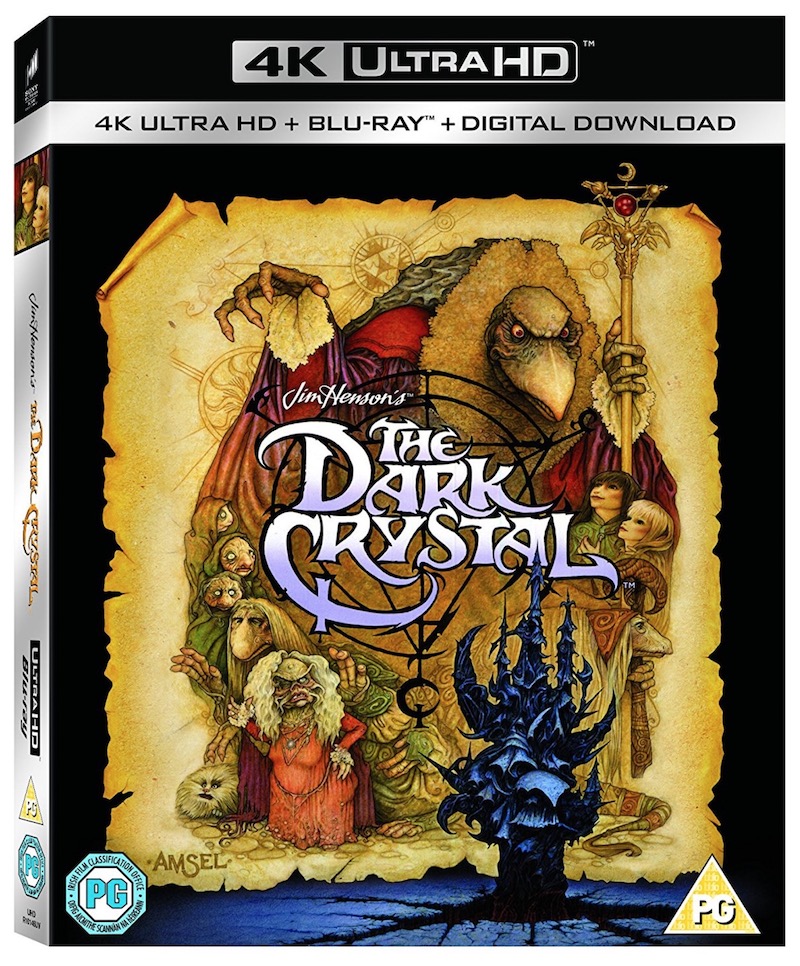