Luc Besson’s career was on the ascent in the early-1990s, after impressing with Subway (1985) before making a big splash with The Big Blue (1988) in his native France. But it was La Femme Nikita (1990) that brought the stylish French director to Hollywood’s attention, and his first English-language movie Leon was something of a continuation of that action thriller. Nikita featured Jean Reno (a lucky charm for Besson’s career at that point) as Victor ‘The Cleaner’, which is broadly the same character he portrays in Léon—although Besson likes to imagine they’re cousins.

Leon (retitled The Professional in the US) concerns a hitman living in the Little Italy neighbourhood of Manhattan, New York, doing jobs for mafioso Tony (Danny Aiello) whenever he’s not exercising, looking after a pot plant, and watching old movies. One day he meets a similarly lonely 12-year-old girl, Mathilda (Natalie Portman), who lives down the hall from his apartment with her dysfunctional family. Tragedy strikes when Mathilda’s abusive father (Michael Badalucco) enrages corrupt DEA agent Norman Stansfield (Gary Oldman) for cutting some of the cocaine he’s being paid to stash in his home, ending in Stansfield slaughtering Mathilda’s innocent family when she’s out shopping. 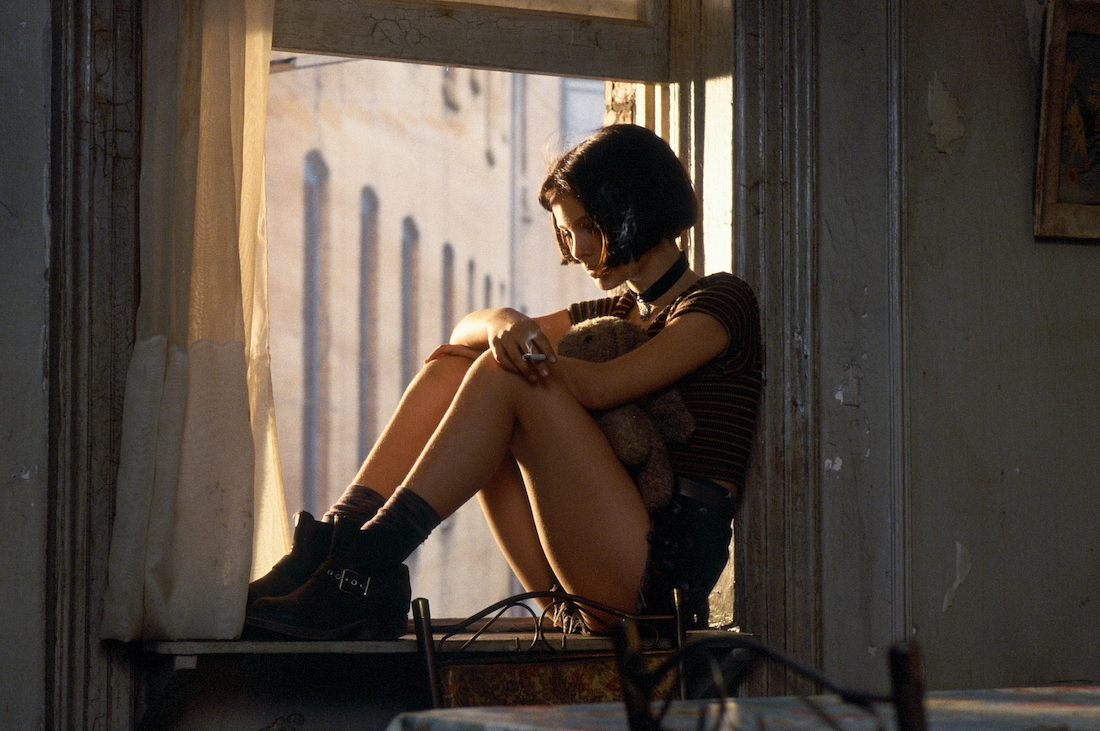 Now orphaned, Mathilda finds comfort with her mysterious foreign neighbour Léon and, after realising he’s a professional assassin, asks to be taught his skills so she can avenge her four-year-old brother’s death (the only member of her family she actually liked). Unaccustomed to having company of any kind, but particularly a traumatised teenager, Léon grudgingly takes Mathilda under his wing as a protégée. And she helps him find a new appreciation for life and gain a new perspective on a world he’s shut himself away from.

This is quite a standard setup, but Leon is an entertaining example of this old story. The film was a modest success at the time (grossing $46M from a $16M budget), but grew in stature once more people saw it on VHS and the careers of everyone involved subsequently blew up. Reno has maintained a successful career in both Hollywood and France ever since (Ronin, Godzilla, The Da Vinci Code), Besson straddles the Atlantic with crowdpleasers like The Fifth Element (1997) and Lucy (2014), and Leon marked the film debut of Academy Award-winner Natalie Portman (Black Swan, Thor). 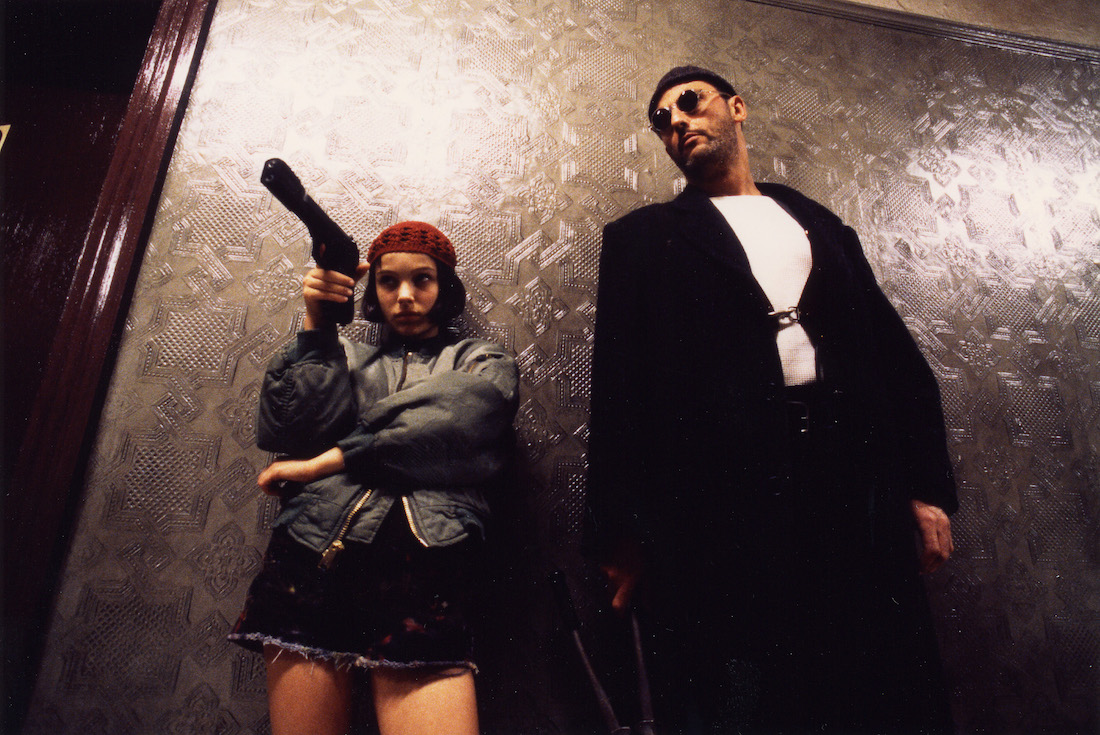 There’s a left-field attitude to Leon that works incredibly well, as it’s both an intriguing character study of two misfits and an enjoyable slice of action cinema whenever that’s called for. The opening sequence with Léon silently taking out a team of bad guys in a high-rise, or the climax with him protecting Mathilda from literally hundreds of armed NYPD ESU agents thanks to his experience and ingenuity, are shot and choreographed with a spiky verve Besson became famous for.

But the majority of the film is surprisingly quiet and restrained, particularly in the director’s preferred extended version (“version longue”). This cut adds 25-minutes of character development between Léon and Mathilda which the theatrical release sacrificed due to a bad response from preview audiences. In 1996, this longer cut was released in French cinemas before arriving on VHS. The extra material definitely helps forge the bond between the main characters better, although it does seem to drag out certain elements of the plot. There comes a point where Stansfield hasn’t been seen for a long time, and keeping the villain off-camera isn’t always the best idea when the story returns to focus on his shenanigans towards the end. 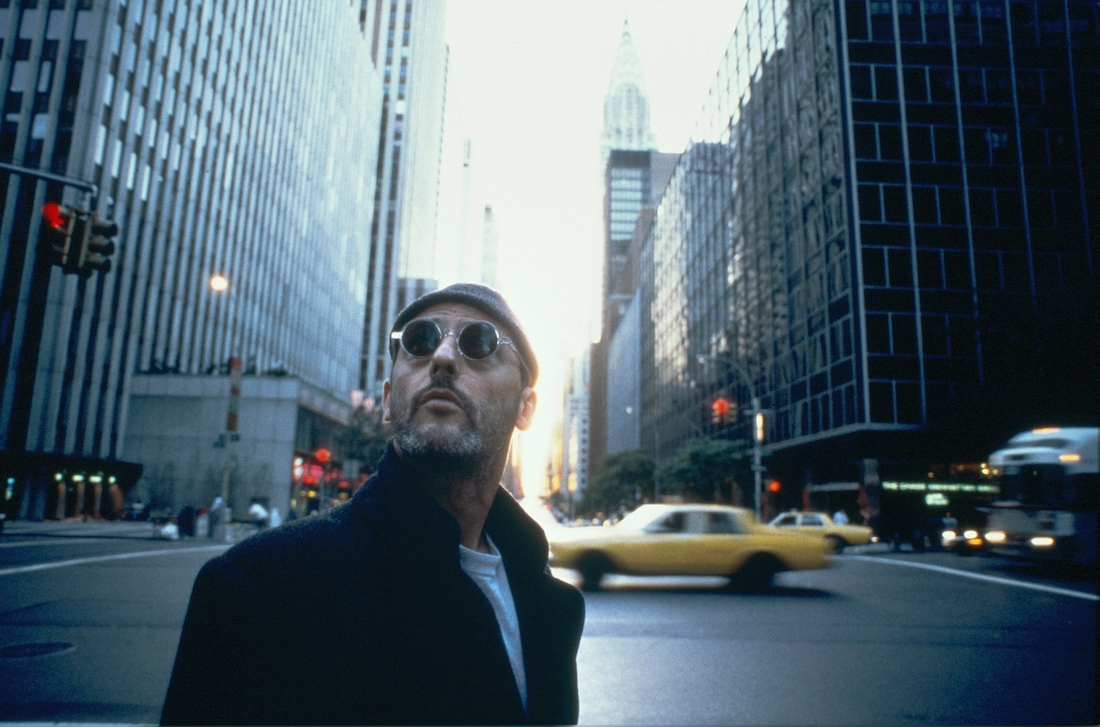 One thing audiences must grapple with is the sometimes icky relationship between Léon and Mathilda, as the latter’s attachment to her saviour and surrogate father starts to cross from hero worship to misplaced sexual feelings. It can be dismissed as uncomfortable when Mathilda’s dressing provocatively as Madonna and Marilyn Monroe to entertain Léon at home with a guessing game, but once she’s confessing her love for him, inviting him to kiss her, and offering him a place next to her in bed… some questions may be asked about Besson’s views!

It’s certainly interesting to see Mathilda deal with her trauma by attaching herself to Léon in a romantic way, as she’s going through puberty and comes from a broken home without a loving father of her own, but there are times when the script is biting off more than it can chew. And it doesn’t help when one learns Luc Besson himself got 15-year-old actress Maïwenn Besco pregnant when he was aged 32 and shooting this very movie. The age of sexual consent is just 15 in France, so Besson committed no crime under French law, but it casts a different light on certain aspects of Leon once you know that real-life background. Natalie Portman was apparently happy with how her character is portrayed, although her parents have insisted Besson remove some nudity and violence that involved Mathilda. Besson obliged but they were apparently still surprised by some of the “sexual twists and turns” in the movie, which hadn’t been in the script—presumably referring to some of the moments mentioned above. 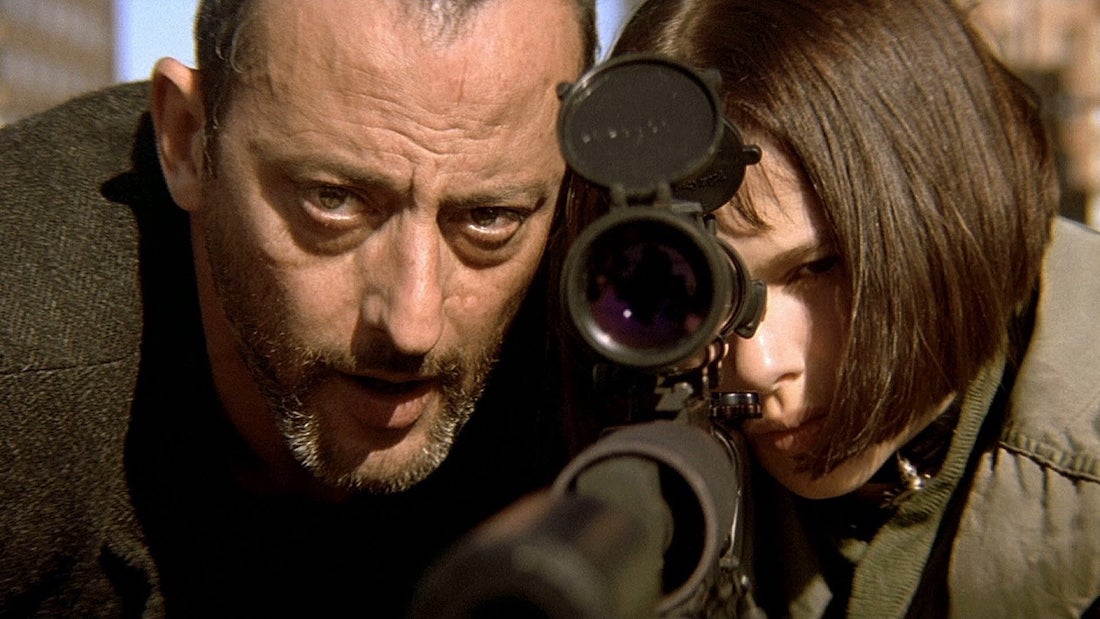 Putting aside that troublesome undercurrent, particularly when viewed today, Leon is still an entertaining and intelligent thriller. It also benefits from excellent performances across the board. Reno is sympathetic but frightening as a skilled hitman; a quiet man detached from the world behind inscrutable shades and sleeping upright on a chair. Léon’s also something of a man-child in his demeanour, and his immaturity also comes through in how he only drinks milk and wears ill-fitting clothes like a kid pretending to be a grown-up.

On the flip side, Mathilda’s an actual child who’s wise beyond her years and does a better job handling the everyday adult things Léon doesn’t think to bother with, like shopping and cleaning. It’s no wonder Portman went on to become an actress of note, going from Leon to Michael Mann’s Heat (1995) and Tim Burton’s Mars Attacks! (1996) before Star Wars Episode I: The Phantom Menace (1999) broke her into the big time. She hasn’t looked back since. 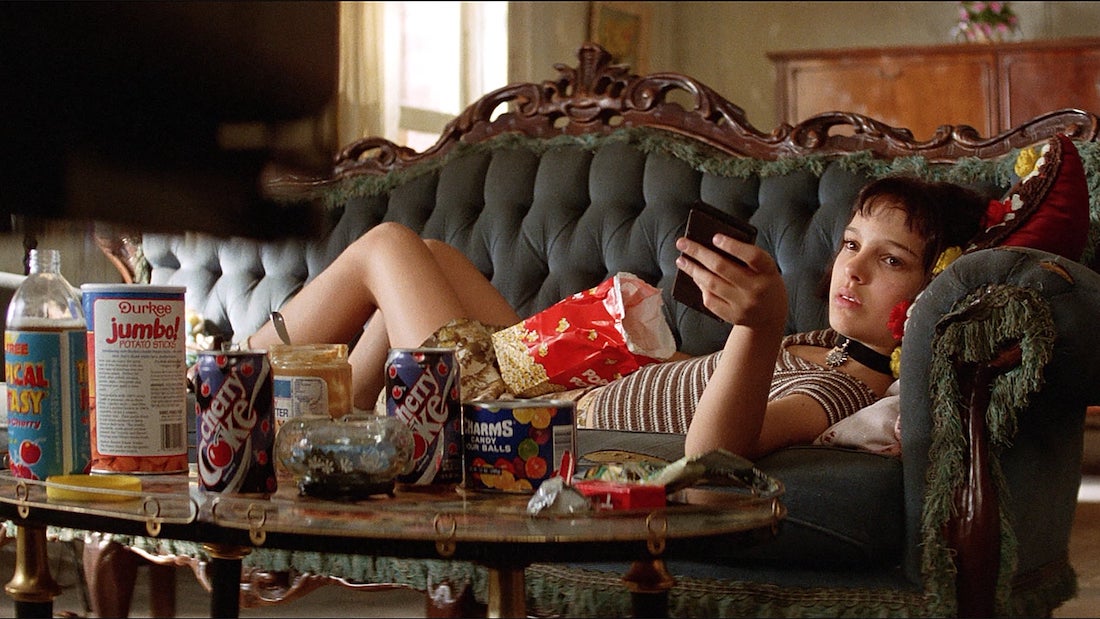 And finally, there’s Gary Oldman continuing a villainous streak that began with Lee Harvey Oswald in JFK (1991), Bram Stoker’s Dracula (1992), and True Romance (1993). Stansfield is now held up as being one of the decade’s better screen villains, as he’s such a strange oddball with a twitchy demeanour and love of classical composers. For a while, Oldman got pigeonholed playing weird bad guys (even returning to play one for Besson in The Fifth Element), and this is where that started. I find that some of Stansfield’s motivation gets a little lost in the mix, but Oldman is certainly committed to a peculiar and unpredictable performance. His scream of “EeeVERYONE!” has deservedly become a meme.

Leon is often hailed as an untouchable masterpiece, but I don’t agree. It’s an effective and peculiar movie with great performances and some fine action sequences, but some of Besson’s decisions with the Leon/Mathilda relationship don’t sit well with me. Maybe they were intended to ruffle feathers, sure, but they also muddy a poignant relationship and inject an unwelcome level of creepiness knowing what Besson was doing in real life with a young lover. 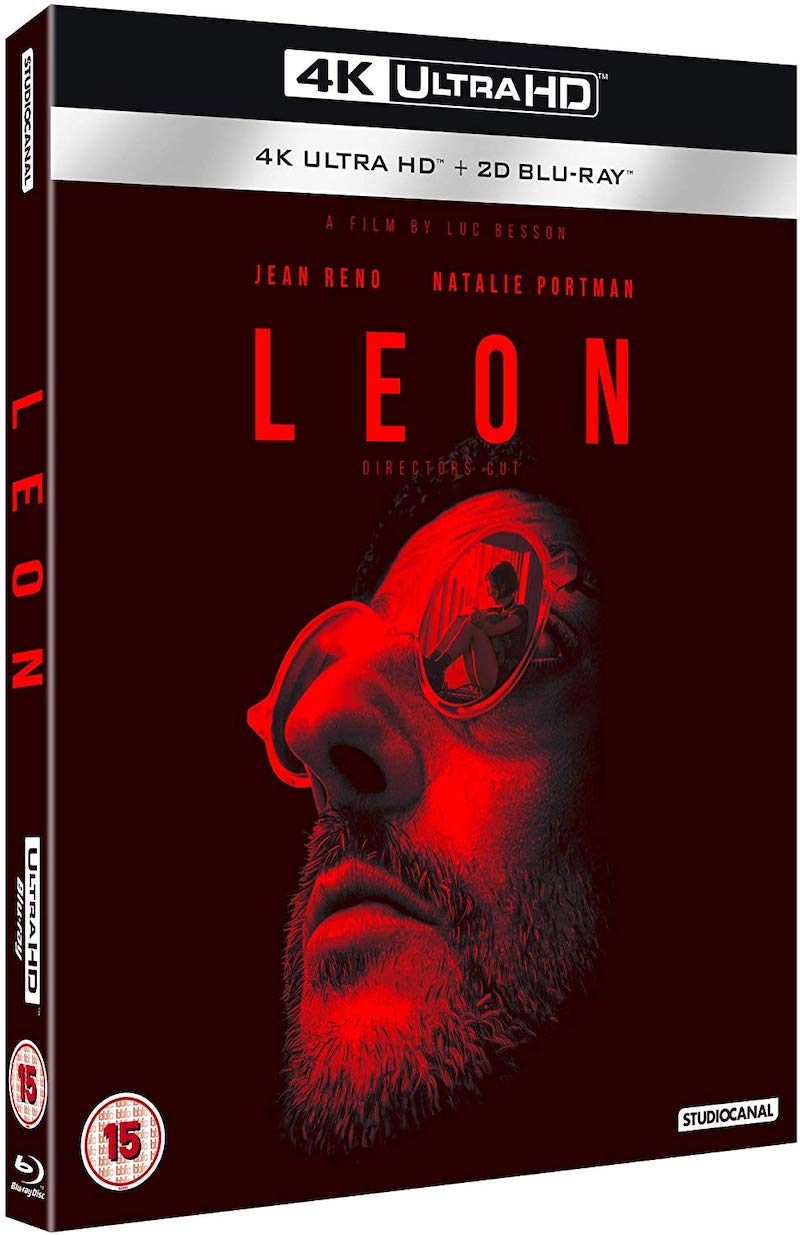 Besson shot Leon on 35mm film with no Digital Intermediate (DI), making this is a native 4K release direct from the source, utilising High Dynamic Range (HDR10/Dolby Vision). The 2.39:1 aspect ratio image might not ‘pop’ as modern films shot digitally do, but this is another remarkable transfer from Sony Pictures that relaunches Leon on home video in the best quality yet. Colours are rich, blacks are deep, there’s a high level of detail everywhere (particularly noticeable in the exterior city scenes) and, despite some occasional softness at times with the lenses, this is a masterful transfer that will please cineastes.

The existing Dolby TrueHD 7.1 core soundtrack for the existing Blu-ray gets punched up to Dolby Atmos to take advantage of the object-based possibilities, and it’s another winner. The dialogue remains clear amidst the soundtrack and sound effects, which thunder and spin around the speakers with immersive clarity and punch. Bass is also handled well.