A centuries old vampire comes to England to seduce his barrister Jonathan Harker's fiancée Mina Murray, whom he believes is the reincarnation of his lost love...

Francis Ford Coppola was on a downer in the early-1990s, after The Godfather: Part III (1990) failed to rejuvenate his career by concluding the crime saga that made him a household name in the 1970s. He’d had some successes in the 1980s, of course—The Outsiders (1983), Peggy Sue Got Married (1986)—but it’d been a long time since the extraordinary highs of Apocalypse Now (1979). Coppola was keen to sink his teeth into something grand and operatic. Pun fully intended.

It was Winona Ryder (who dropped out of appearing in Godfather III at the last-minute) that brought James V. Hart’s half-faithful version of Dracula to Coppola’s attention. The idea of crafting a sensual adaptation of this Gothic horror classic instantly appealed to the Oscar-winning filmmaker. 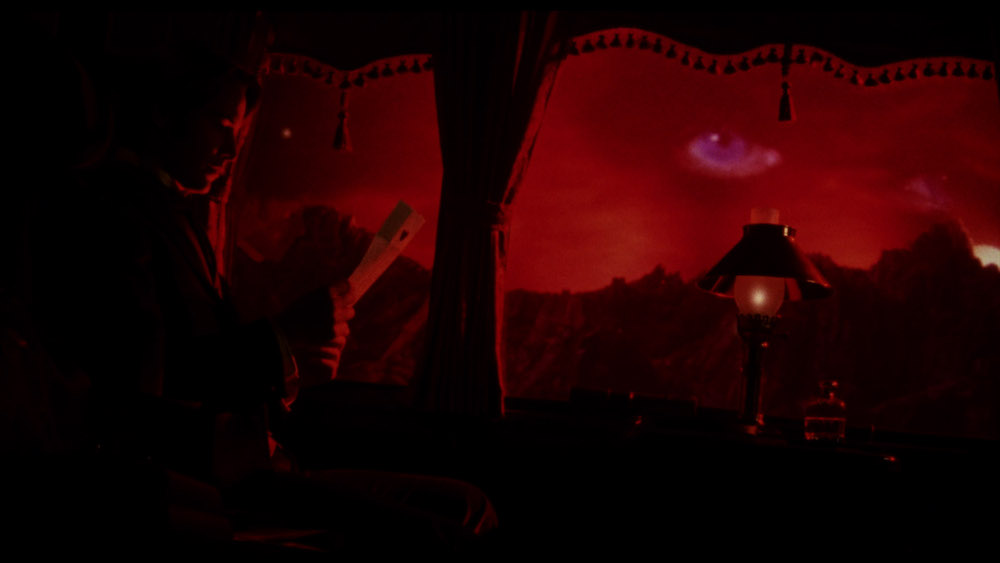 When I first saw Bram Stoker’s Dracula (hereafter Dracula) I was a young teenage boy and has seen a lot of vampire movies in the ‘80s, which had steered away from the Count Dracula archetypes associated with either Bela Lugosi and Universal, or Christopher Lee and Hammer Films. I’d never read Stoker’s original novel, unless you count an abridged version aimed at children, so for my generation this 1992 version was a more seminal experience than older audiences perhaps realise. The only notable Dracula adaptation before it was John Badham’s 1979 version with Frank Langella as the lead, and it’s bizarre to note there hasn’t been another straightforward Hollywood adaptation in the 25 years since Coppola’s film. Just modernised updates like Dracula 2000 (2000) and re-imaginings like Dracula Untold (2014).

The great thing about the ’92 Dracula is how timeless it feels. Coppola intentionally made the movie using old-school techniques instead of the emerging digital F/X available at the time. Coppola actually fired his visual effects team when they complained it was impossible to make this movie using antiquated methods, and replaced them with his own son Roman Coppola, who achieved everything his father wanted using on-set tricks and optical illusions. The movie’s extensive use of rear projection, forced perspective, miniatures, and matte paintings, help give Dracula the sense of being a lost 1940s classic with the added panache and eroticism of something 40-years beyond its own time. 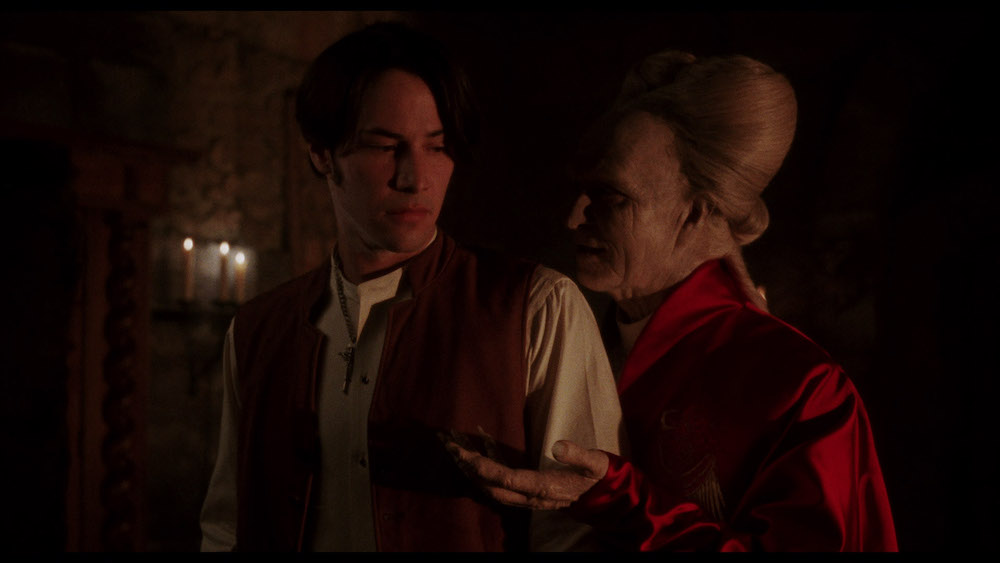 Dracula broadly follows the plot of Stoker’s famous novel, but it’s misleading to have the author’s name so prominently in the title. It suggests greater fidelity than there actually is. In particular, Hart’s script invents a crucial romance between Dracula (Gary Oldman) and Mina Harker (Ryder) that gave the movie its memorable tagline ‘Love Never Dies’. In this version, Vlad Dracula’s bride, Elisabeta (Ryder again), commits suicide after believing her husband died in battle against invading Turks in 1462. Upon hearing his beloved took her own life, damning her soul for all eternity, Vlad publicly renounces God and (somehow!) gains supernatural powers in the process.

Four centuries later, the story then follows Stoker’s familiar narrative of stiff estate agent Jonathan Harker (Keanu Reeves) travelling to Transylvania to help a decrepit Count Dracula buy a home in London, unaware his host’s really an ancient blood-sucking vampire. The key difference is that Dracula comes to believe Harker’s fiance, Mina, is the reincarnation of his late wife Elisabeta, which provides a rich love triangle to the old story. 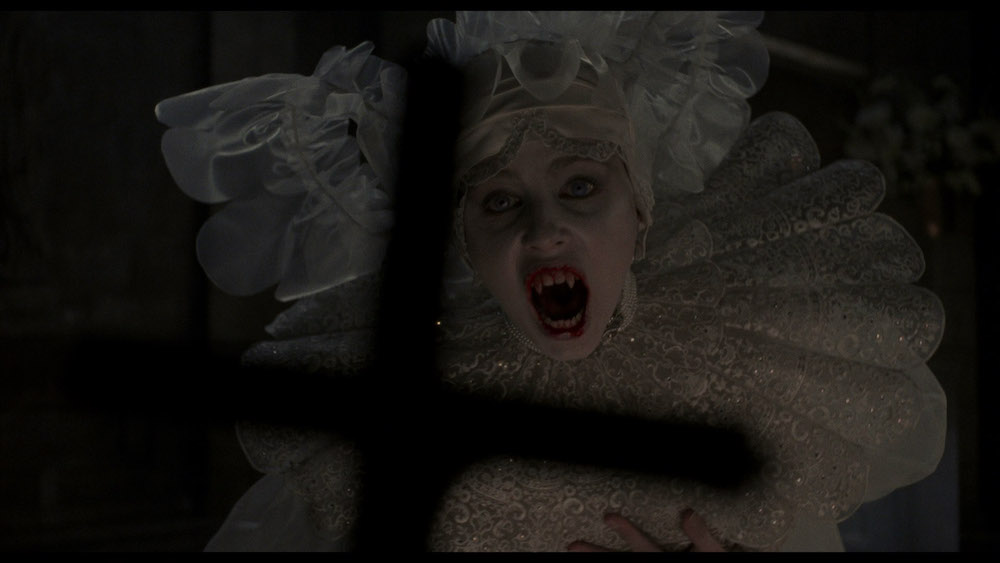 Indeed, this new approach has arguably overtaken Stoker’s own in popularity. It’s a superior change that expands the emotional depth of everything that happens. The idea that Mina Harker and Dracula have a connection that transcends death is now touched upon in subsequent adaptations, as people are surprised to learn it wasn’t taken from the source material. I certainly enjoy this tweak. It personalises events more than Stoker’s story ever managed — as the original story was more about Dracula intending to spread his undead curse around the globe, after setting up camp in what was the capital of the modern world in the late 19th-century.

Coppola’s movie is overblown and heavily stylised, but that’s very welcome. The script’s solid enough to shine through the visual excesses that are piled onto the movie, and there are excellent performances from Gary Oldman and Tom Waits (as bug-eating Renfield). I always enjoy watching Anthony Hopkins chew scenery as Professor Abraham Van Helsing (almost dry-humping one man’s leg in excitement during one scene), while Ryder’s very likeable as Mina and communicates the otherworldly tension between her stuffy suitor Jonathan and exotic “old flame” Dracula. 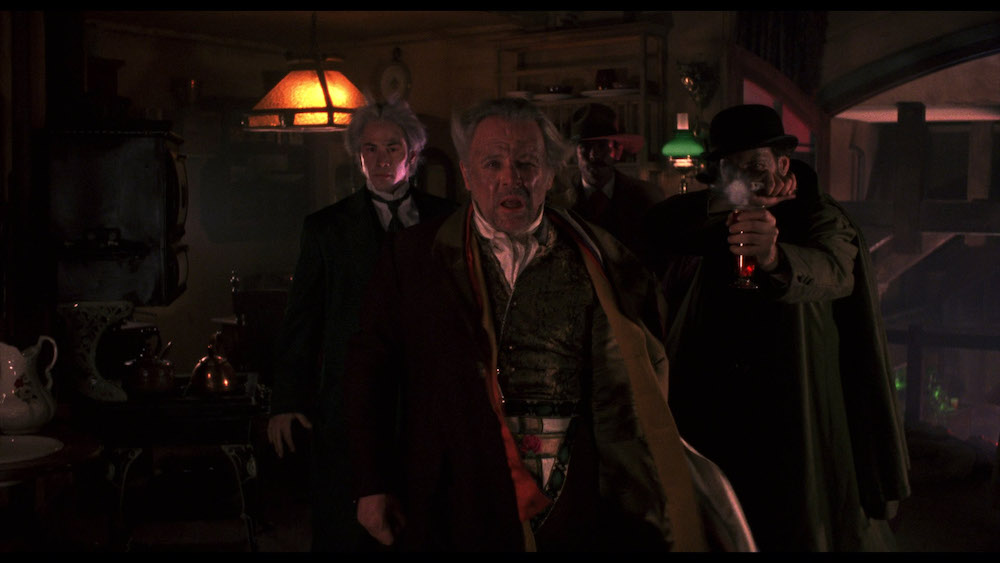 Mina’s first scene involves her peeking at illustrations in the Karma Sutra, wide-eyed in wonder, as giggling best friend Lucy Westenra (Sadie Frost) embarrasses her with tales of no-doubt exaggerated sexual exploits. Mina’s a stereotypically prim and proper Englishwoman, prudish and corseted, but excited by thoughts of having a more sexually gratifying life. This gives Dracula’s courtship of her greater power than in the novel, as you can always sense Mina’s temptation to become the lover of a dashing foreign prince who’s more dangerous and exciting than courteous Harker. Keanu Reeves’s performance is legendarily awful (mostly because his English accent’s a mess), but the upside is Dracula seems even more of a better prospect in comparison.

Dracula himself is sexually re-awoken in this movie. Early scenes in his castle present him as a withered old man, perhaps close to starving because the locals know better than to cross his threshold. He’s even taunted by one of his three “brides” about the lack of love in his life, after catching them having group sex with Harker. The inferences is that Dracula’s been living like a loveless hermit for centuries after Elisabeta’s death, keeping his brides alive more like pets. But he’s not even powerful enough to bring them adults to feast on, just easy pickings like a baby. 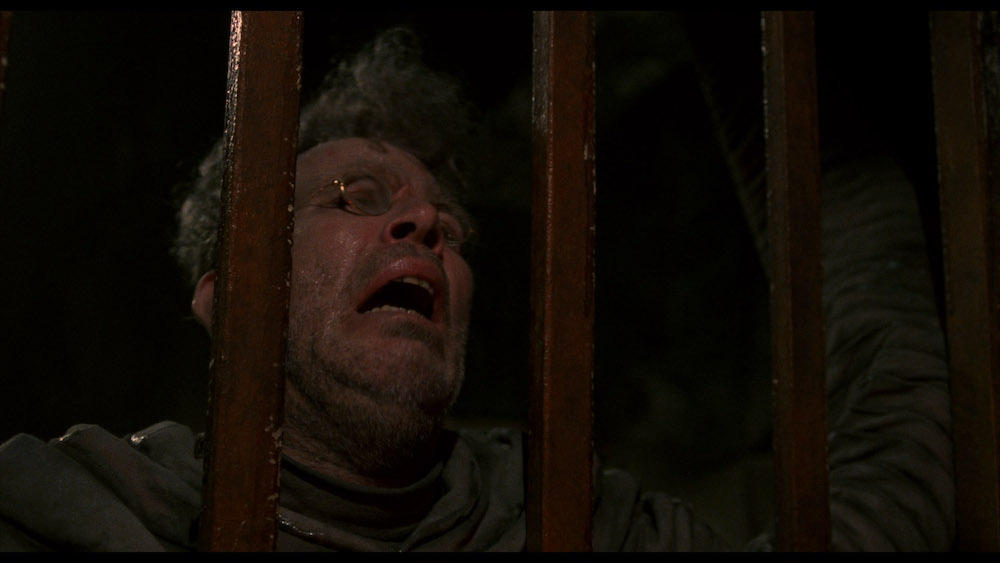 It’s true that Coppola never quite recaptures the glory and insanity of Dracula’s opening half-hour or so, particularly the prologue and sequence when Harker arrives in Transylvania and spends a night in Dracula’s company. 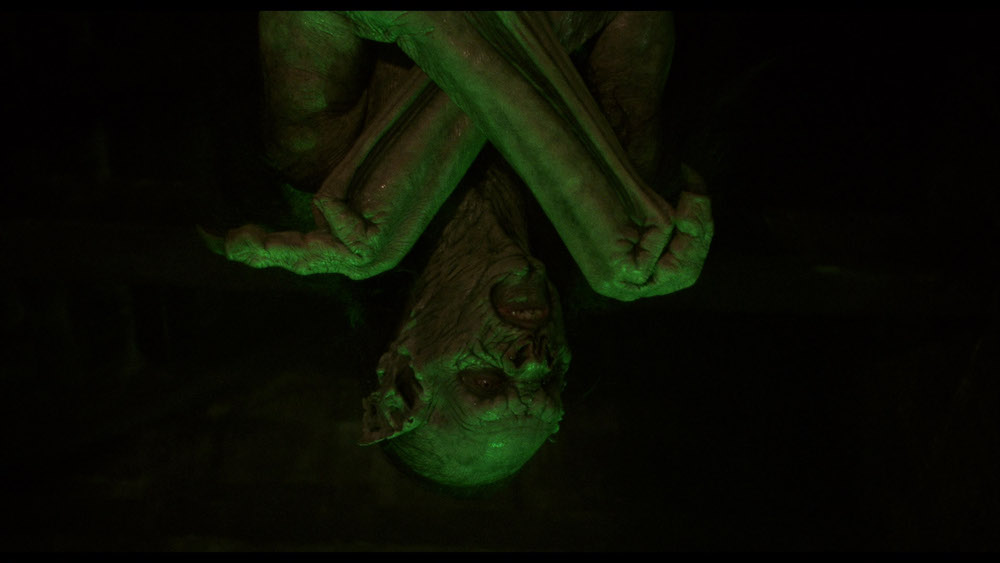 A lot of the movie’s iconic moments and images are from the first act, and it’s a sensory buffet in terms of the tricks Coppola serves up. There are crazy dissolves, amusing match-cuts (the eye in a peacock’s feather to a tunnel, puncture wounds to wolf eyes), beautiful silhouette jokes (the best when Dracula’s shadow secretly throttles Harker), and a very peculiar feel to Dracula’s castle as an unnatural perversion in its own right. Gravity doesn’t even seem to follow the laws of physics there (rats run upside-down along the ceiling), and have you ever noticed his crumbling abode resembles a man sitting in a throne?

The lavish costumes also dazzle, as Coppola spent a large percentage of the movie’s $40 million budget on them. They deservedly won an Academy Award that year, with Japanese costume designer Eiko Ishioka doing something very fresh in a genre where it often feel like each production rents the same wardrobe. Dracula’s long dragon’s tail kimono and his red ‘skinned muscled’ armour are truly striking images, together with simpler choices like giving Oldman a pair of John Lennon-esque sunglasses to wear in the daytime, or Renfield’s striped straightjacket with the incredibly long arms. 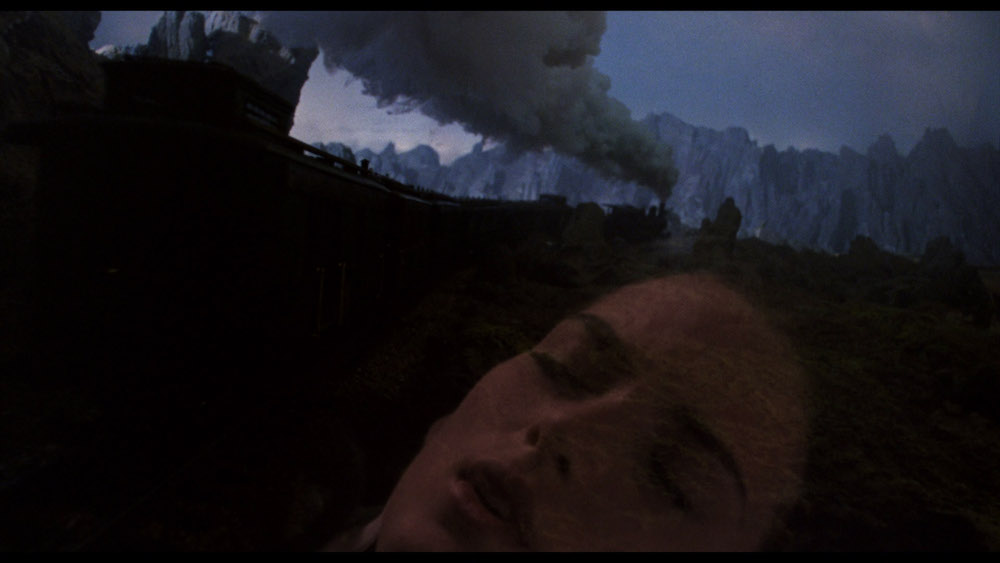 The movie does makes some mistakes, of course. The aforementioned casting of Keanu Reeves (then a teen idol best-known for Point Break and the Bill & Ted movies) was a totally bizarre decision. Reeves proved his worth as an actor in certain types of roles, but period drama and British accents aren’t his forte. He’s wooden and looks very uncomfortable throughout, which robs the audience of any true desire for Mina to stay with a fop like Harker. When she leaves England to marry her fiance in a foreign church, it feels like she’s making a big mistake instead of taking a positive step away from Dracula’s influence. Interestingly, the original plan was for Jonathan Harker to be played by Winona Ryder’s real-life boyfriend at the time, Johnny Depp. That sounds like a much more exciting prospect. If their chemistry had been as strong as I’m imagining it might’ve propelled Dracula to even greater heights.

Some of the secondary characters, like Dr. Seward (Richard E. Grant), Lucy’s boyfriend Sir Arthur Holmwood (Cary Elwes), and Quincey P. Morris (Billy Campbell), are also underused and barely leave any impression. Maybe it’s hard to when you have Anthony Hopkins hamming it up, although Sadie Frost manages to bring a real vivacious charm to Lucy Westenra. I love her classic reaction to being presented with a crucifix, or the moment where she leans out of her coffin to vomit blood on Van Helsing. 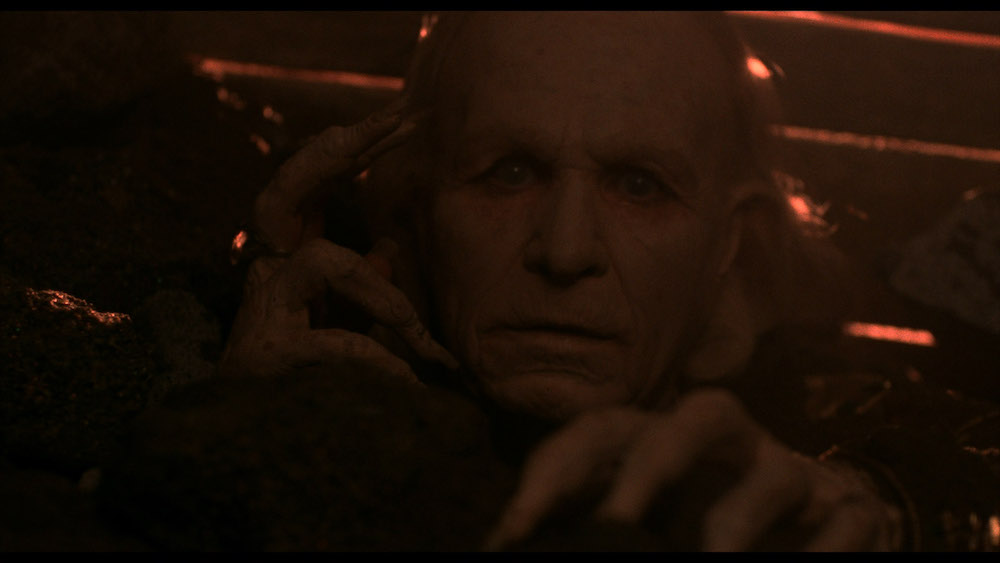 It’s frightening to realise Bram Stoker’s Dracula is now 25 years old, and a little sad it was Coppola’s last movie of any real merit — with the possible exception of The Rainmaker (1997). But this was certainly the last time Coppola flexed his filmmaking muscles with such giddy abandon, and its success almost begat a run of classic horror remakes. Unfortunately, the Coppola-produced Mary Shelley’s Frankenstein (1994) was met with mixed reviews and grossed just $112 million (only $22m coming from US cinemas) compared to Dracula’s $215m.

In the years since, I’ve known people who consider Bram Stoker’s Dracula a ridiculous romp crippled by hammy acting and shoddy accents, but I’ve just never understood how anyone could dislike it. This is an art house movie with a blockbuster budget, brought to life by a master craftsman clearly enjoying every crazy minute of what the script allowed him to do. After 25 years, my love for it certainly hasn’t died.