“It’s a game where the viewer is asked to get involved.” That’s how writer-director Olivier Assayas describes his auteur opus Irma Vep, “a comedy about brilliance.” The film is indeed very clever and generously makes the viewer feel equally clever for enjoying it. Make no mistake, this is about as arty as an art film can get. If you are a cinephile, there’s nothing to dislike here as every minute, every nuance is a delight. At times it can get a tad didactic and some of the characters deliver dialogue that almost constitutes a mini lecture on the historical context of French cinema, but that’s fine by me. Then it’s suddenly a documentary about its own production, and next you’re watching a beautifully observed comedy of manners, a screwball romance, a visual poem, an exercise in constructivist composition… a knowing nod to fellow movie nerds.

Les Vampires (1915-16) was a classic French film series from the silent era, created by Louis Feuillade. Although heavily imbued with Gothic tropes, there were no overt supernatural elements, except a suggestion of mesmeric control. The titular ‘vampires’ are actually a secret society of super criminals who control the Parisian underworld. The third instalment of the series saw the introduction of nightclub singer Irma Vep (an early role for Jeanne ‘Musidora’ Roques), who remains a high goth heroine. There’s a clue to Irma Vep’s complicity in her name if you work out the anagram. She’s recruited into Les Vampires to infiltrate the home of newspaper reporter Philippe Guérande (Édouard Mathé) and retrieve the ‘Red Code Book’, a damning catalogue of their nefarious activities. 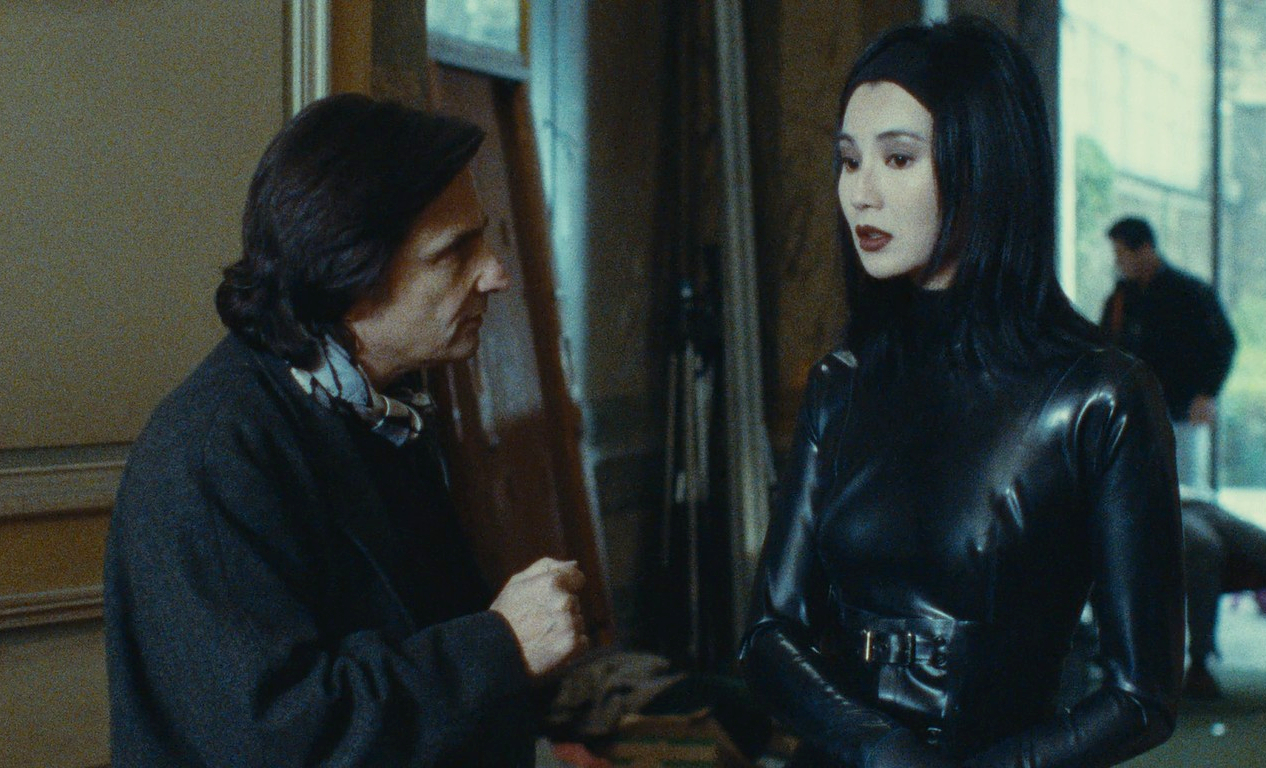 The plot of Assayas’ Irma Vep revolves around the creative angst of film director René Vidal (Jean-Pierre Léaud) as he attempts to reboot Les Vampires for a modern audience. The film opens with the production team trying to sell the idea over the telephone to investors, pushing it as being an art film with “cultural” value. The camera wanders through the offices, from one member of the team to the other, as three prop guns arrive and are nonchalantly passed around. The way they gesture to each other and the air with the pistols feels dangerous, and immediately there’s a tension between reality and cinematic illusion. The guns look authentic, but the casual handling implies they are not.

People pass in front of the camera, briefly obscuring our view in fly-on-the-wall documentary style, until we see the casting director interviewing hopefuls in another room separated by a huge window. An invisible fourth wall. Get it? Assayas is easing us gently into an exploration of visual linguistics. Early on, there’s also a cleverly conspicuous edit when one scene follows on from the last, signified by a cigarette being lit from the previous by a chain-smoker. Anyone familiar with Roland Barthes’ structuralist theories will have a good chuckle at this and be ready to look out for his five narrative codes in action… 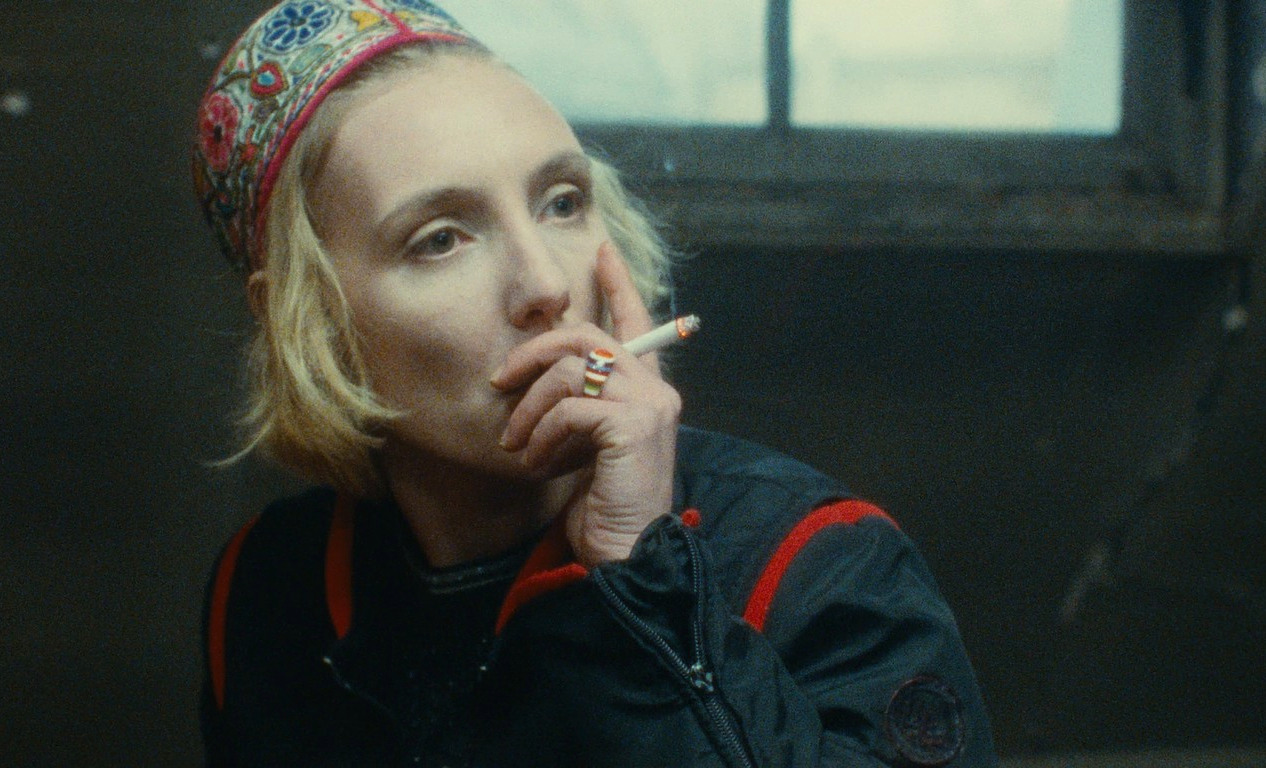 Jean-Pierre Léaud is a veteran actor of French cinema who’d previously worked with François Truffaut, Jean Cocteau, and became a favourite of Jean-Luc Godard. Here he’s a scene-stealer with his overly intense director persona, coming across a little like Brando’s Kurtz in Apocalypse Now (1979). When we meet him, he’s almost a caricature of a genius French director, a visionary, a cliché. “He used to be very good,” we’re told, but soon his façade is crumbling to reveal his insecurities and obsessions.

He decides to make his reboot as a black-and-white silent film and, returning to the source material, he borrows from an earlier film series of Louis Feuillade: Fantômas (1913), which followed the escapades of an antihero master crook. This character was already familiar to French audiences from a series of novels and serialised stories, and is seen as the template for the modern serial killer genre, breaking literary convention by following the exploits of the villain. 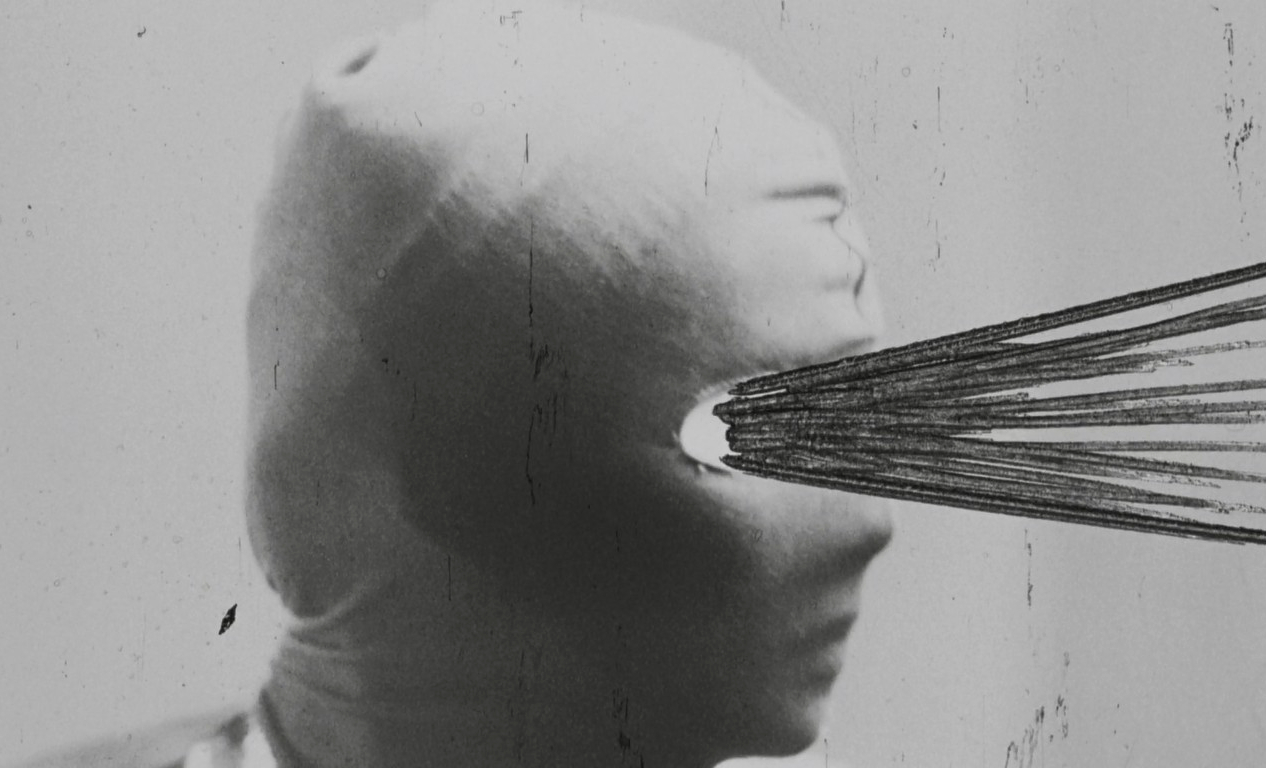 He decides to make his Irma Vep (Maggie Cheung) more of an elusive ‘cat burglar’ and has her dressed in a skin tight latex cat-suit and adapted gimp mask. The scene where costume designer Zoé (Nathalie Richard) takes Maggie Cheung for her costume fitting in a sex shop is ingeniously manipulated to introduce a sensitive lesbian sub-text. Well, it doesn’t remain sub for long…

In her shiny suit and face mask she bears a striking resemblance to super-villain Diabolik, the Italian star of the hugely successful Fumetti Neri (noir comic-book) series and its cult Mario Bava adaptation Danger: Diabolik (1968). This would be no coincidence as he, too, was inspired by the classic French Fantômas serials and Assayas, the real director, would be completely aware of this. 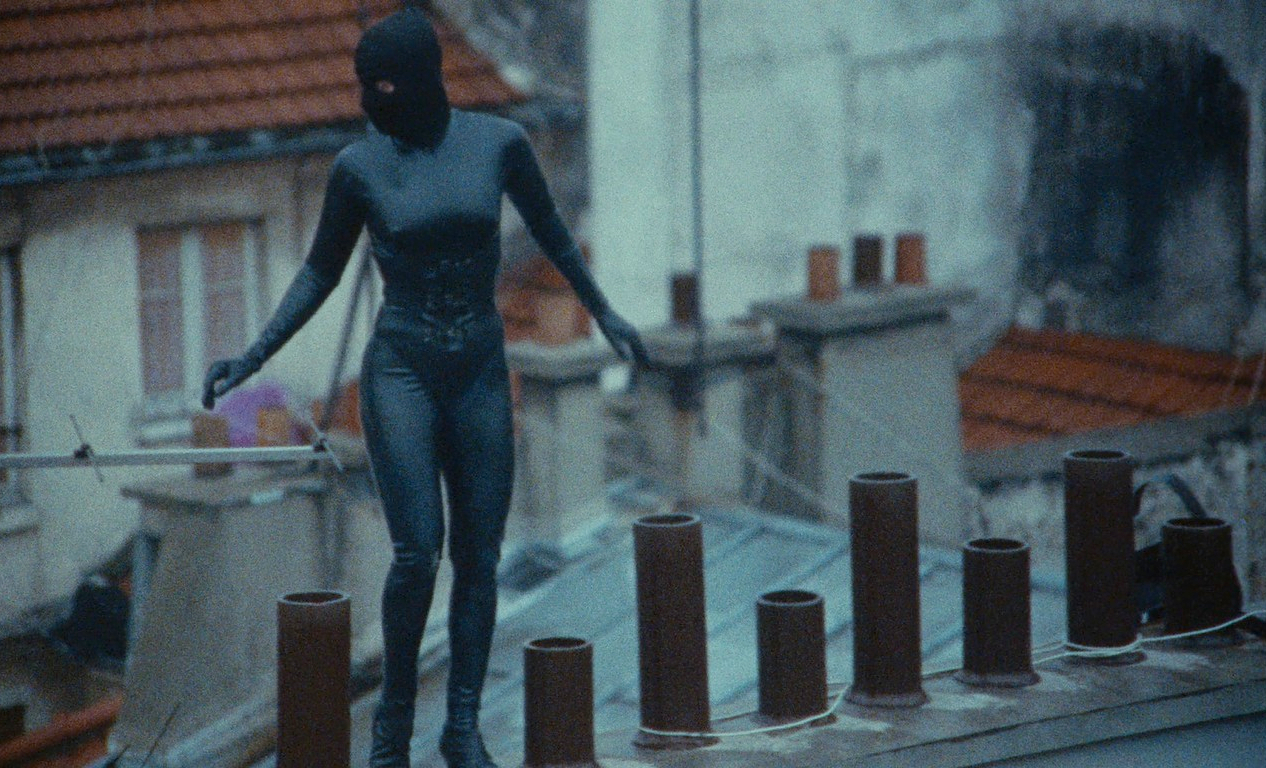 I get the feeling that Assayas, recently recognised with a Best Director Award at Cannes for Personal Shopper (2016), is well aware of every little reference, every tiny signifier, and what it may signify. He’s toying with us. Building up a pretence only to tear it down. Presenting us with a puzzle and then generously handing us the solution. He trains the viewer to understand the visual language of cinema, making the film a must-see for anyone studying media or film. The characters themselves, being part of a film crew within the film, analyse ‘real’ life as if it were a film… which, of course it is! They identify the signifiers, then debate what may be signified. They talk about relationships as if analysing dramatic language.

Here’s an example of how spot-on his visual conjuring can be. On first viewing, I was just thinking that the monochrome shots of Cheung in her bondage suit reminded me of the work of Japanese photographer Arākī. Then, I became aware of the film grain during scenes shot in low light and was reminded of the work of one of my favourite photographers, and sometime collaborator of Arākī, Daidō Moriyama. Moriyama approaches the photograph not as a representation of the real world, but merely the formal arrangements of light and dark on a surface. He utilises film grain to draw attention to this surface in the same way that Arākī may draw attention to the surface of a body by having it wrapped in cellophane or latex. Both are involved with removing the illusion of form from the reality of a surface. 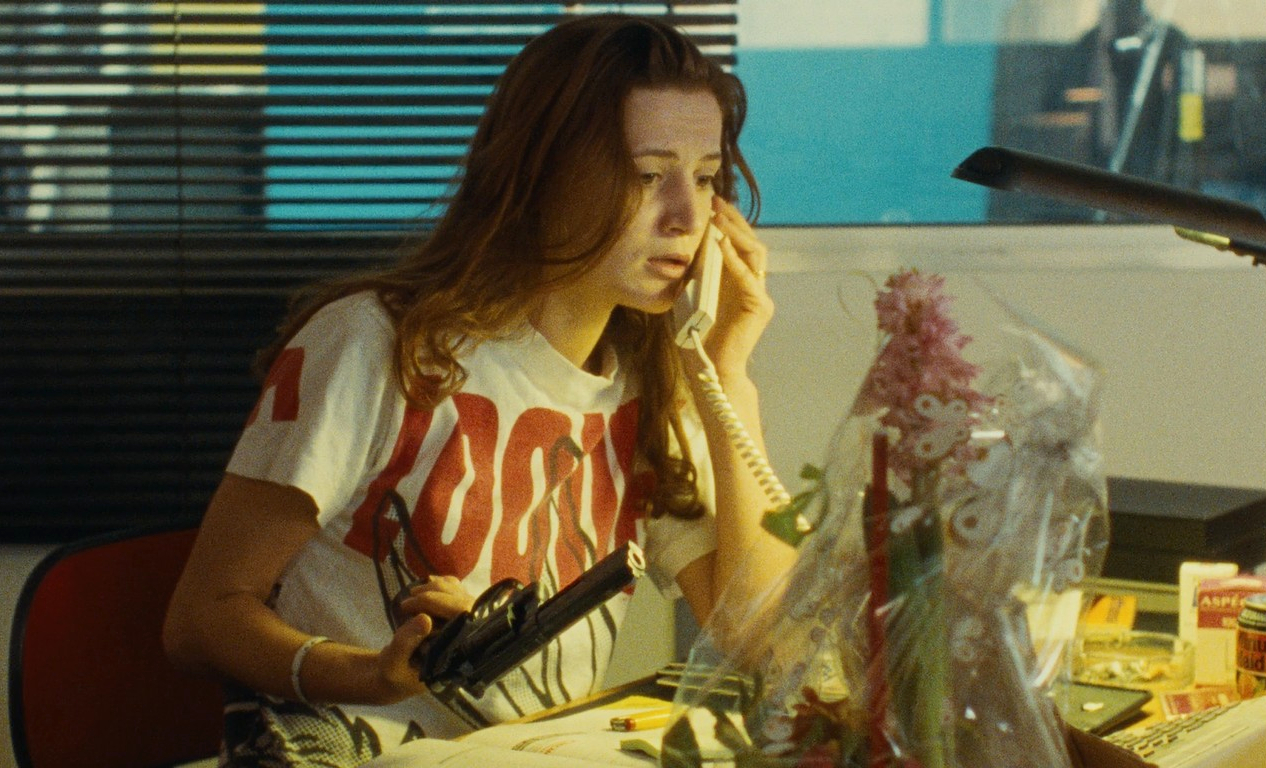 Well, I was pondering all this (because the film gets you thinking that way) when René Vidal, talking to Maggie Cheung, says “you’re saying you are at the centre of the scene, whereas, in fact you are just at the surface.” To which she responds “if you feel it, you are inside, you’re not on the surface.” And in his intense manner he pursues, “you feel it?” She shrugs and he says “I feel nothing” quietly with restrained frustration and anger. “Everything is fantasy… is deception.” And there you have it: what David Lynch would call “the eye of the duck,” the scene that informs the whole and gives the film its form. Shortly after, there’s a laugh-out-loud scene in which the cast and crew watch the rushes—a film-within-a-film-within-a-film—the shots of audience reaction and the final outburst of the irate director brought to mind a similar scene from Mel Brook’s The Producers (1967)!

Everything about Irma Vep is super cool. Maggie Cheung’s latex-clad Irma is an icon in waiting. One of my favourite scenes, where Maggie ‘becomes’ Irma, is set to Sonic Youth’s “Tunic (Song for Karen)” with its “Goodbye Hollywood” lyric. This dream-like sequence sees Maggie become absorbed by a burglary fantasy and sneak into another hotel room to steal some jewellery. The scene is effectively suspenseful, especially as the room she stealthily steals from is still occupied, by a naked woman we see framed in the bedroom doorway in a clear reference to Marcel Duchamp’s final installation work, Étant Donnés (1946–1966). One thing’s for sure, latex is just too creaky to be sneaky.

The rest of the score is equally impeccable, with “Bonnie and Clyde”, the Serge Gainsbourg and Brigitte Bardot duet, featuring prominently. If I’d seen this film at an impressionable age, it may well have become one of my all-time favourites. Not many art films are this much fun! 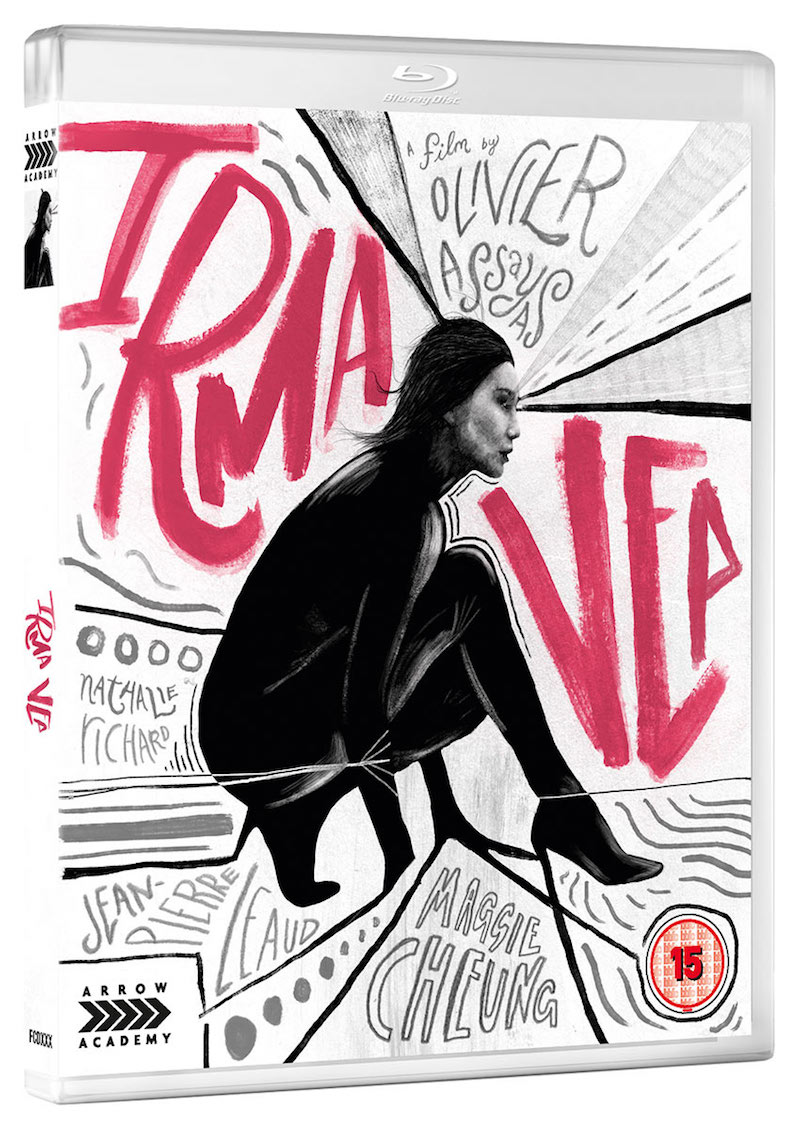 I’m ashamed to say, I missed out on this classic first time round, so I’m grateful to Arrow Academy for their new Blu-ray release with its beautiful 2K restoration from the original negative, supervised and approved by Assayas himself. The release also comes with a bunch of special features offering in-depth insights into the film: