Mel Brooks certainly laid it all on the line for his debut feature, The Producers! It’s hard to think of anything as fresh as this hard-hitting satire before or since. Even today, 51 years later, its audacity is astonishing. If it still seems outrageous now, it’s hard to imagine the impact it had on audiences in the late-1960s.

Given the subject matter—fraud and funny Nazis—it should be offensive, but of course, it isn’t. Perhaps that’s because almost the entire cast and crew appear to be Jewish. Though this is never directly referred to in the script. Who else could get away with such a zealous send up of the Third Reich? Who else has the licence to lampoon what led to the extermination of millions of Jews without causing an uproar? Well, there was Charlie Chaplin’s The Great Dictator (1940), a brave and prescient satire which did tackle similar themes, but that was before the holocaust. 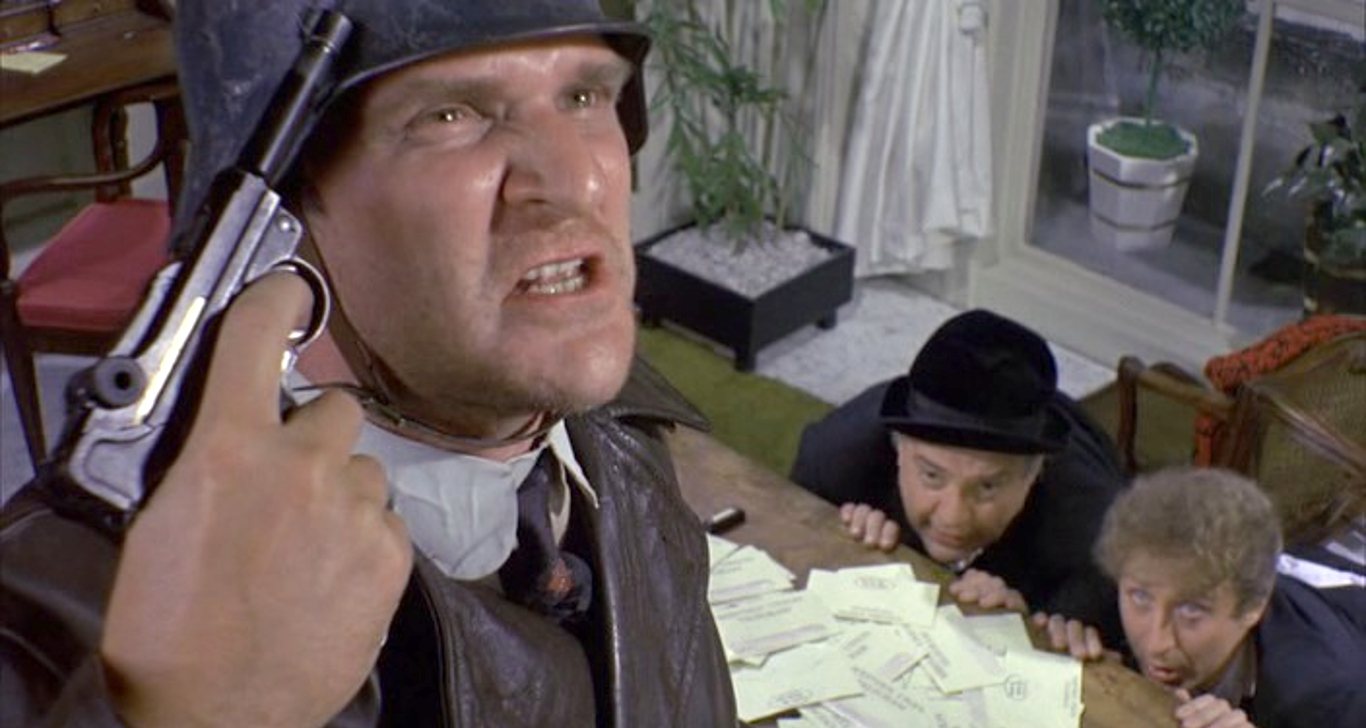 The film is practically a showcase of American Jewish talent, and all involved give absolutely full-on performances. It’s the central characters of Max Bialystock (Zero Mostel) and Leo Bloom (Gene Wilder) that really carry the film and keep it watchable.

Mostel plays a big-shot producer, fallen on hard times, with such blazing fervour and energy that it’s hard not to get carried along with his criminal scheming. He has such rapacious hunger in his eyes and vulnerability in his chins that make us believe in, and feel for, his larger-than-life character. He’s a cartoonish caricature, but one with recognisable human traits and flaws. He espouses a desire for success, and an envy, that most of us have felt to some degree, and he reflects these back at us like a big funhouse mirror, distorted and exaggerated but still recognisable. Bialystock has such hunger, it’s almost an affliction, and we can be disgusted by his ravening, but also sympathise with such confidence in, and honest acceptance of, his own drives. 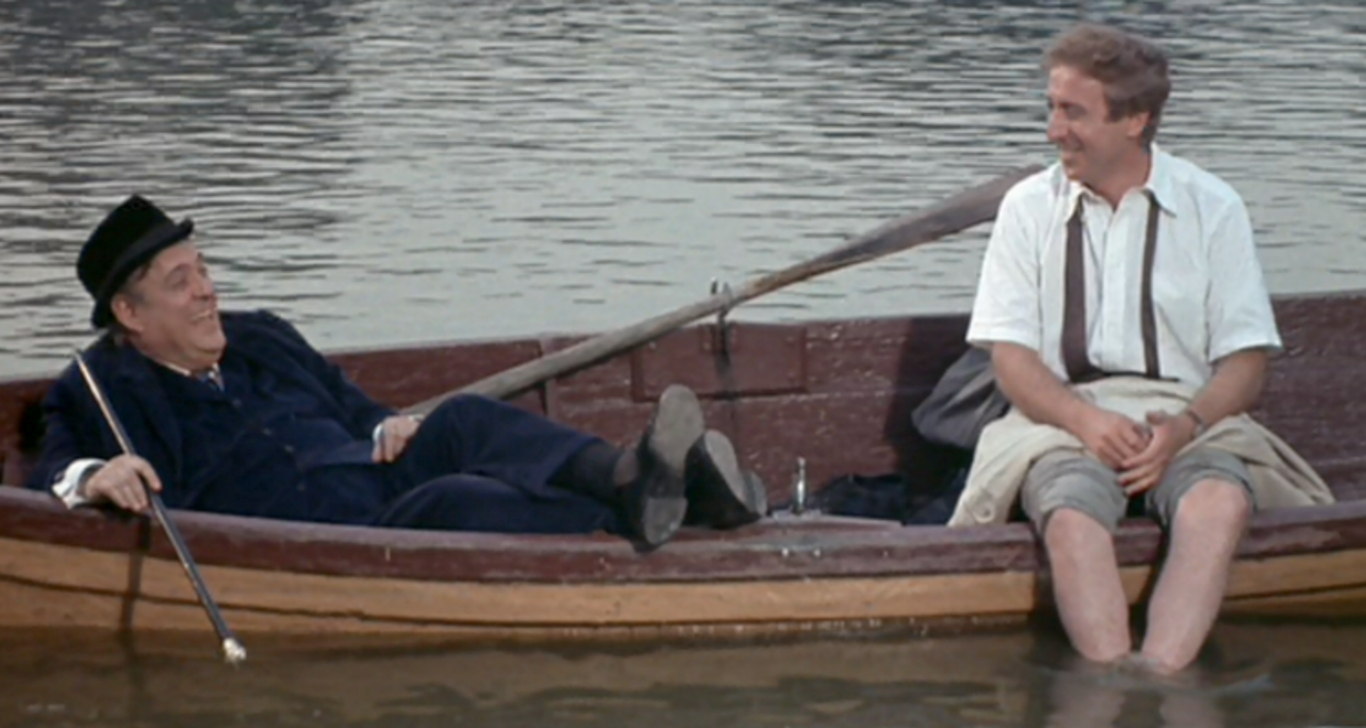 In contrast, Wilder plays Bloom, the accountant sent to go over Bialystock’s books, as a man on the edge of nervous collapse. It’s a completely innocent observation, at least to begin with, that a producer stands to make more from a complete flop of a show, than from a box-office smash. He explains, hypothetically of course, that if a show makes no profit, then its investors don’t expect to earn any return and “the IRS isn’t interested in flops.”

Bialystock jumps on the idea, and several not so sweet but very rich old ladies along the way, and soon they have sold 25,000% in a production they now have to ensure makes it into production but is a guaranteed failure. So, what better than to use a script titled Springtime for Hitler, written by nutty ex-Nazi Franz Liebkind (Kenneth Mars), nostalgic for his Fuhrer and Fatherland, and turn it into what is described as “a gay romp with Adolf and Eva”? 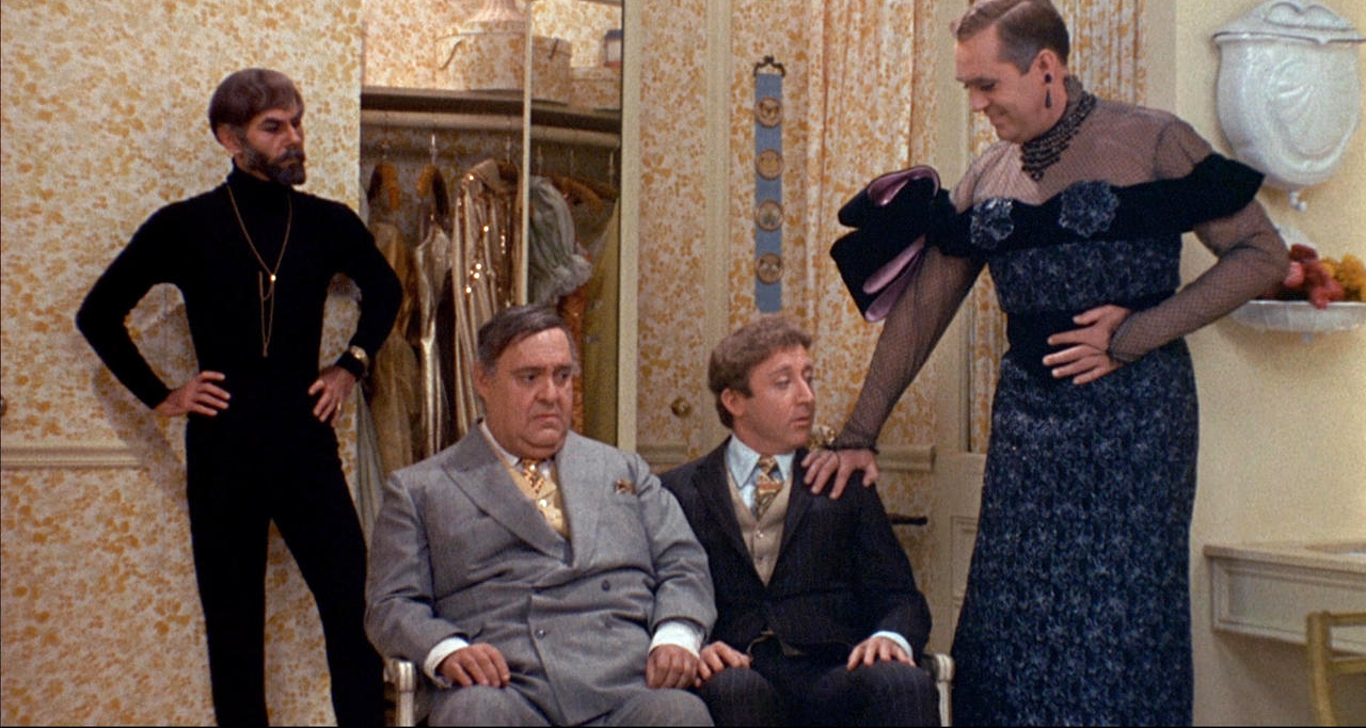 After several TV shows and stage plays, The Producers was Gene Wilder’s second feature, made the same year as Bonnie and Clyde (1967), in which he had a notable cameo as a hapless undertaker. It was when Brooks went to see his wife, Anne Bancroft, starring in the Brecht play Mother Courage and Her Children, that he first met Gene Wilder and became friends. He wrote the part of Leo Bloom with him in mind and described Wilder as “always an inch and a half away from hysteria. It was right there in his eyes. He was like a trapped animal and, in The Producers, Max Bialystock is the thing that’s trapping him.”

The relationship between Max and Leo is something like a hybrid of buddy movie and madcap romantic comedy. They fit well together, Max’s desperate zeal compensating for Leo’s fragile nervousness. Their scene in Bialystock’s office is a masterclass in nuanced screaming and semi-slapstick physical acting that borders on combatant. This is the benchmark for the rest of the film and its energy does carry through. The scenes focussing on just Mostel and Wilder form the film’s backbone. 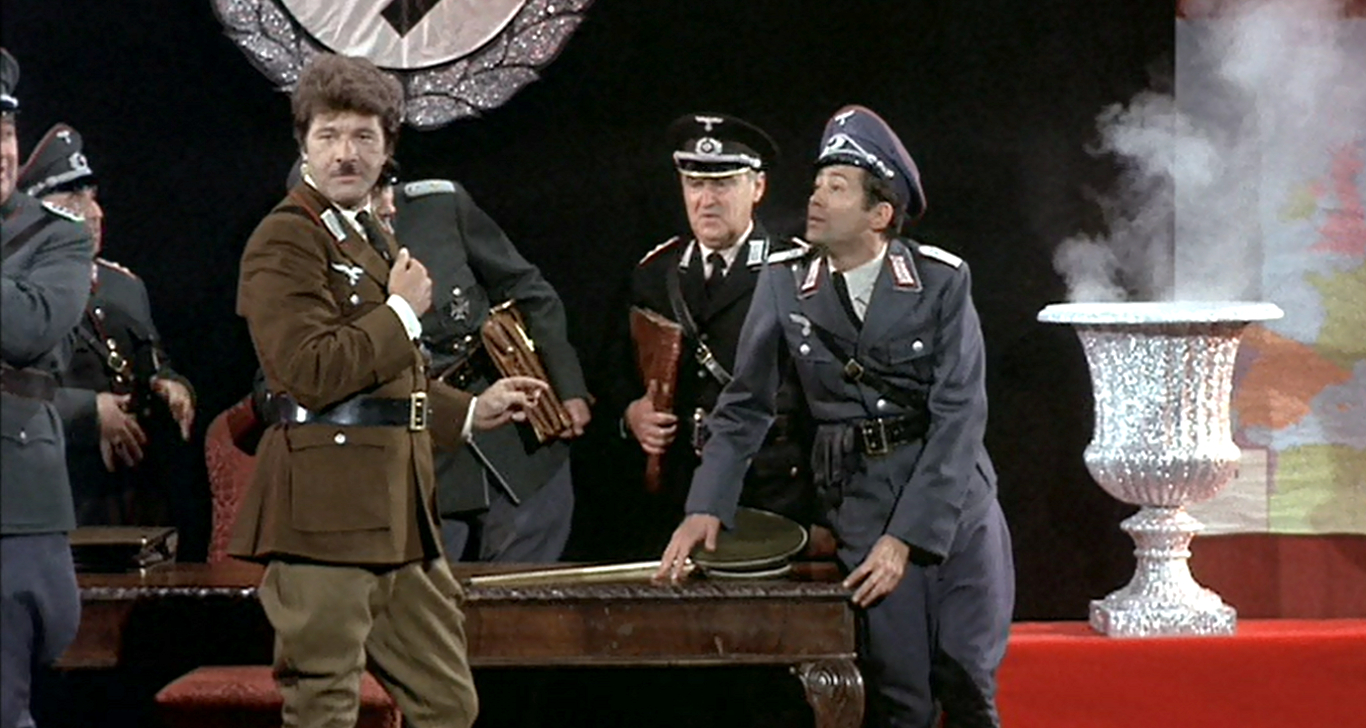 Zero Mostel was already established and came to The Producers fresh from leading an all-star cast in Richard Lester’s film version of A Funny Thing Happened on the Way to the Forum (1966). The only main cast member with a longer resume would be Estelle Winwood who plays the salacious little old lady we know only as ‘Hold Me Touch Me’. She’s 84 here, having been an actress since she was five and making her Broadway debut in 1916. She made her final appearance, aged 97, in an episode of Quincy ME in 1980 and lived to be 101.

The rest of the cast take their cues from Wilder and Mostel and for the most part is just as off-kilter. One of my favourite moments is when hep-cat Lorenzo St. DuBois (Dick Shawn), appropriately known by his initials ‘LSD’, turns up at the Hitler auditions, by mistake, and performs his hilariously over-the-top hippy ‘protest song’. He prances about in thigh-high shag-pile boots whilst tinkling finger-symbols! He would be so ludicrously miscast in the lead role of Hitler that, of course, he lands the part. 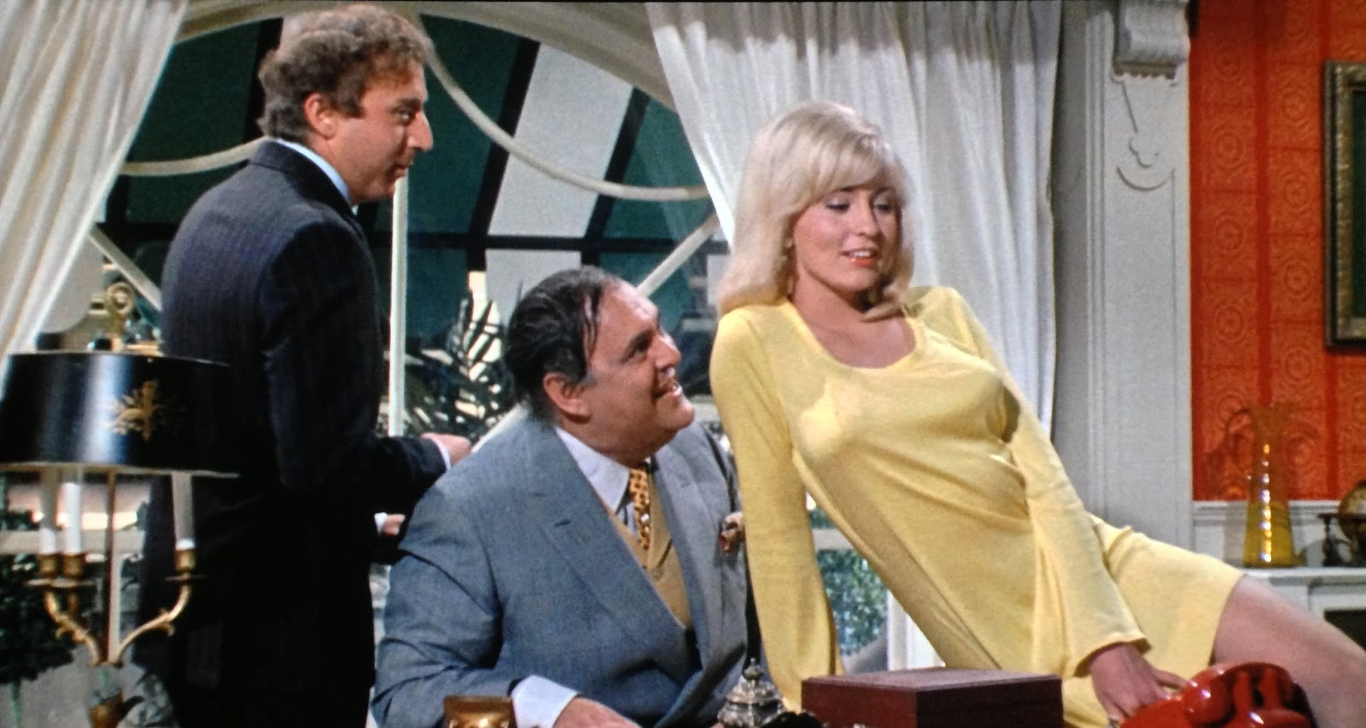 Shawn started out as an ironic nightclub singer and stand-up comedian and had a string of television appearances on his resume when he proved himself capable of big screen broad satire as Sylvester Marcus in It’s a Mad Mad Mad Mad World (1963), and went on to replace Zero Mostel as Pseudolus, the lead role in the comedy stage musical A Funny Thing Happened on the Way to the Forum as it continued on Broadway.

Renée Taylor, who joins him as Eva Braun, started her stage career on the same bill as Barbara Streisand and will be known to many as the overbearing mother of Fran Drescher’s character in The Nanny. Alas, she’s completely overshadowed by busty fräulein’s dressed in pretzel bikinis or tankard-inis (a term I just coined) with fake beer foam preserving their modesty, and the Gestapo-girls of the chorus line, high-kicking in a swastika formation! This is basically the punchline scene for the film’s biggest joke. 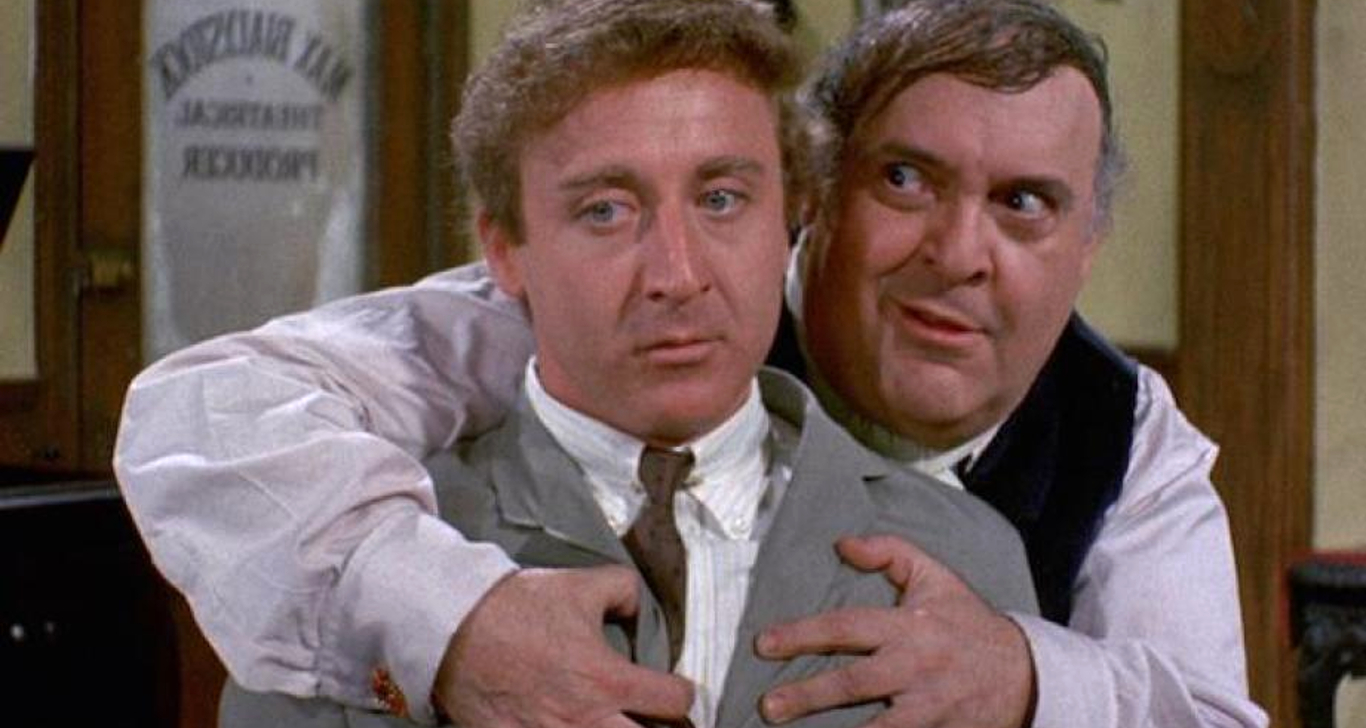 Apparently, Joseph E. Levine, who acted as executive producer, personally put up half of the production budget to a tune of nearly half a million dollars. At the time he had produced more than 30 films, though chose not to be credited for The Producers.

Producer Sidney Glazier would work with Mel Brooks again on The Twelve Chairs (1970) and, along with associate producer Jack Grossberg, went on to produce Take the Money and Run (1969) for that other famously Jewish maverick auteur of comedy, Woody Allen. Grossberg then worked repeatedly with Woody Allen on both Bananas (1971) and Sleeper (1973). 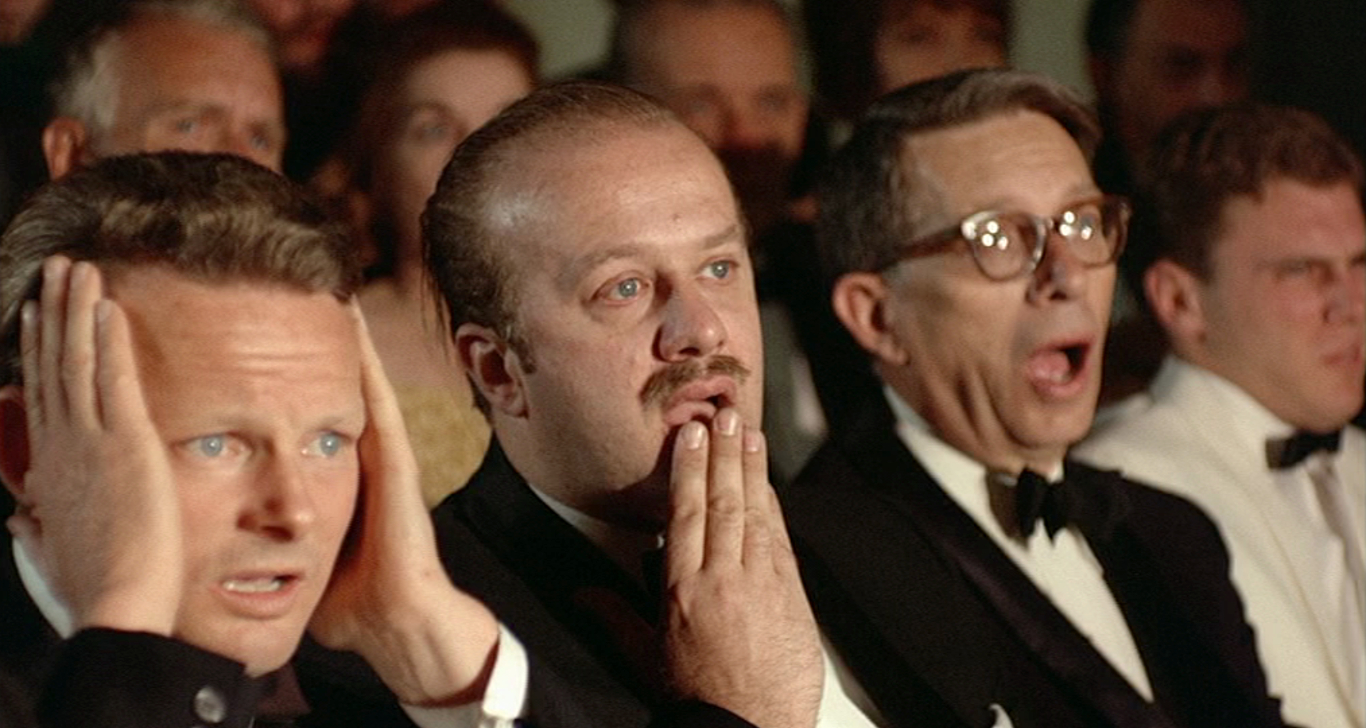 The Producers is a landmark of comedy cinema. Whether you find it funny or not depends on your sense of humour. I think it would be very hard for a modern audience to be offended by it. Ultimately, if it’s funny then it’s no longer offensive. This is the power of comedy; it can deal with unpleasant and sensitive issues in ways that a politically correct approach simply couldn’t. It can call-out politically incorrect attitudes in its audience without them immediately raising their habitual, culturally constructed barriers.

I remember reading a definition of comedy as a ‘benign violation’. If it’s safe, then it’s boring and there’s no surprises, so there’s no real emotional response. If it violates our beliefs, penetrates into our comfort zone, then that can certainly stimulate an emotional response, but that’s more like horror than comedy and if we feel too challenged we may turn away or shut it out. Comedy happens somewhere in the overlap. We need our everyday expectations challenged, our comfort zone violated, but with no real immediate threat. Then we deal with that surprise, confusion even, with laughter. It relies almost entirely on context. 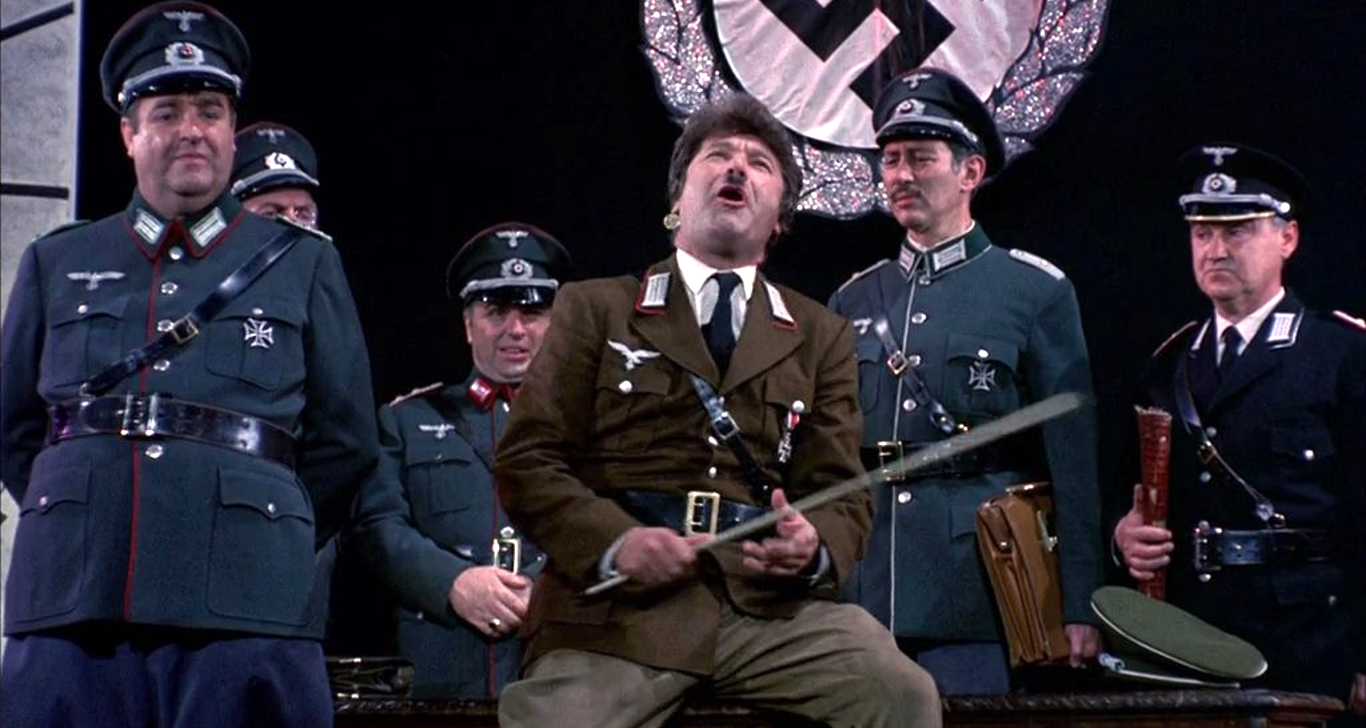 So, is The Producers comedy or satire? In his book Personality and Sense of Humour, Avner Ziv wrote “comedy and satire possess a common denominator in that both try to change or reform society by means of humour. The two forms together constitute the best illustration there is of the social function of humour.” Or as Mel Brooks himself put it: “comedy has to walk a thin line, take risks. It’s the lecherous little elf whispering in the king’s ear, telling the truth about human behaviour.” In a recent radio interview with the BBC he went on to explain, “I personally would never touch gas chambers or the death of children or Jews at the hands of the Nazis. In no way is that at all useable or correct for comedy. It’s just in truly bad taste … Everything else is okay.”

The Producers was later developed as a stage musical, running from 2001-2007 on Broadway and winning a dozen Tony Awards, breaking the record held for 37 years by Hello, Dolly! It also enjoyed huge success in London’s West End with nearly 1,000 performances at the prestigious Theatre Royal, Drury Lane. On television, the fourth season of Larry David’s Curb Your Enthusiasm centred around a production of The Producers, and Mel Brooks and Anne Bancroft turned-in cameos as themselves. The film was remade in 2005 with Nathan Lane and Matthew Broderick as Bialystock and Bloom.

Personally, I would favour Blazing Saddles (1974) the other Mel Brooks politically incorrect masterpiece, but half a century on The Producers is still as fresh as ever. One thing’s for sure, it certainly isn’t boring. But is it still funny? It may well be just too shouty and frantic for some, but it’s time you (re)watched this classic of comedy and made up your own mind.