A young elephant, whose oversized ears enable him to fly, helps save a struggling circus...

Tim Burton’s re-imagining of Disney’s 1941 animated classic Dumbo ticks some boxes for a family film but fails to spark a creative fire. It gets nowhere near the heights of Burton’s Beetlejuice (1988), Edward Scissorhands (1990), or even Big Fish (2003), but it’s a period piece that amuses and entertains from beginning to end.

Holt Farrier (Colin Farrell) is a circus equestrian performer who returns from WWI minus an arm, to find he’s also lost his wife to influenza while he was fighting overseas. He’s now in sole charge of his two young children, Milly (Nico Parker, daughter of Thandie Newton) and Joe (Finley Hobbins), who has been looked after in their parent’s absence by cash-strapped circus owner Max Medici (Danny DeVito).

As a ringmaster and carnival barker, Max is hoping their new baby elephant will draw crowds to his struggling show, only to realise the newborn’s oversized ears mark him out as a laughing stock. But then Milly and Joe realise Dumbo can use his floppy ears to fly after snorting a feather. Later, when a dangerous show stunt goes wrong, Dumbo’s panicked mother causes chaos by destroying the big top and accidentally killing someone, leading to her being sold on and leaving Dumbo alone to be mocked by audiences. 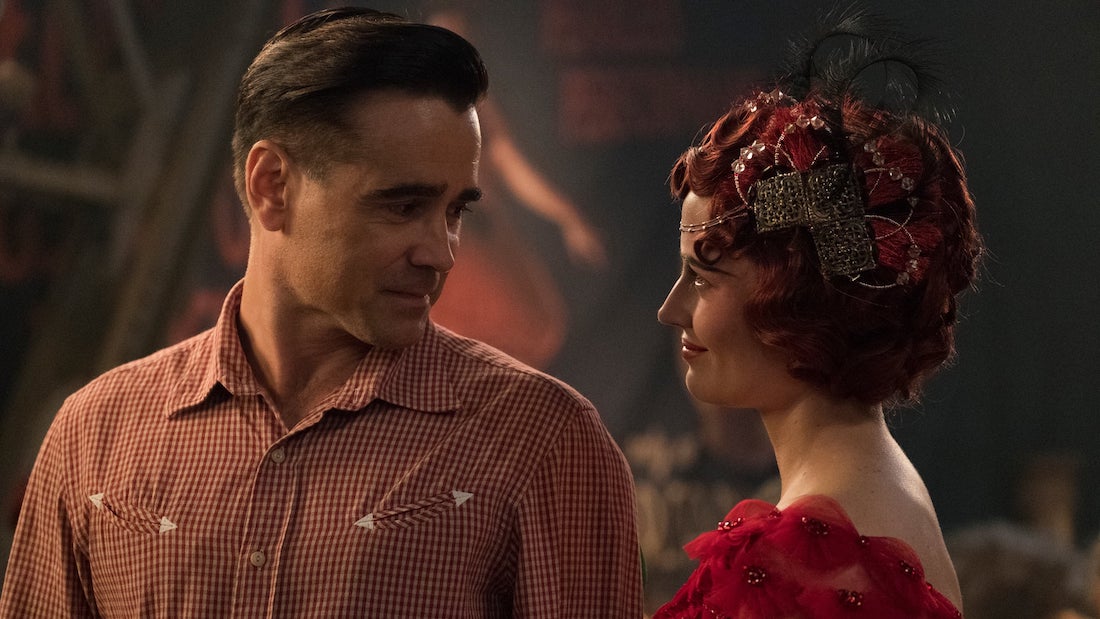 That’s until the little elephant’s ability to defy gravity becomes public knowledge and causes a media sensation. As news spreads about the miraculous flying Dumbo, malevolent entrepreneur V.A Vandervere (Michael Keaton) arrives on the scene with trapeze artist Colette (Eva Green), seeing the elephant as the headlining act for his “Dreamland” theme park.

Burton’s film looks great thanks to the work of cinematographer Ben Davis (Captain Marvel), costume designer Colleen Atwood (Alice in Wonderland), and production designer Rick Heinrichs (The Nightmare Before Christmas). The retro-futuristic aesthetic of Dreamland is reminiscent of Beetlejuice’s Inferno Room but on a far larger scale. But there’s too much going on with these sets; they’re all too big, too CGI reliant, and too cluttered to see what’s going on. The visually bold and dynamic worlds Burton created early in his career are here replaced by lightweight digital landscapes. 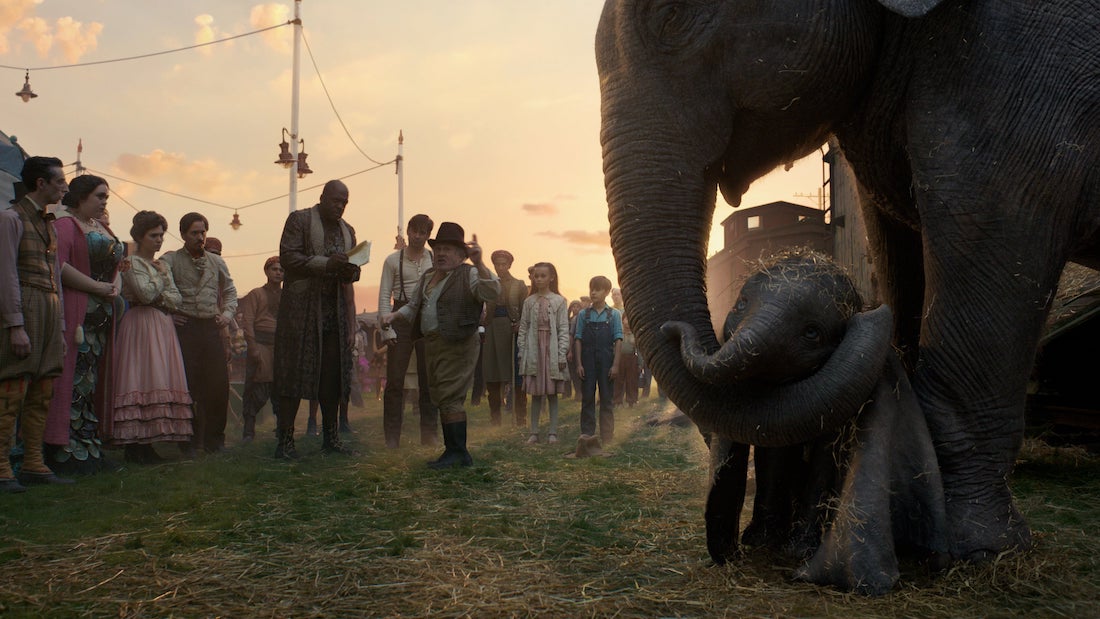 Burton reuses the “Baby Mine” lullaby from the original animation and pays homage to its surreal ‘pink elephants on parade’ scene with giant soap bubbles transforming into enormous elephant shapes, as well as restaging the touching scene with Jumbo reaching through her bars to greet her baby. These small touches make for nice homages without feeling like a shot-for-shot remake.

Dumbo ’19 is often let down by wooden performances and thinly written characters. Keaton’s dastardly Vandevere has no shades of grey, with Keaton overegging his performance, while Green shows flashes of sympathy as Colette but the obvious use of a body double drag you out of any spectacle she’s involved with. Still, the French actress is charming with the scraps she’s given. DeVito makes a natural born swindler likeable in a way only he can, too, becoming one of the few actors who shine in Dumbo, helped by getting many of the best one-liners.

The biggest issue is that the Medici circus acts have no personalities and not one of them is memorable. The younger Tim Burton would’ve made something of this merry band of misfits, each armed with unique skills that allow them to take on the bad guys, but their appearances here feel like padding. Farrell brings heart as the widowed Holt trying to rediscover his place in this world after the war, but the questions arising from his disability and PTSD are ignored in favour of seeing him flirt with Colette and reconnect with his kids. 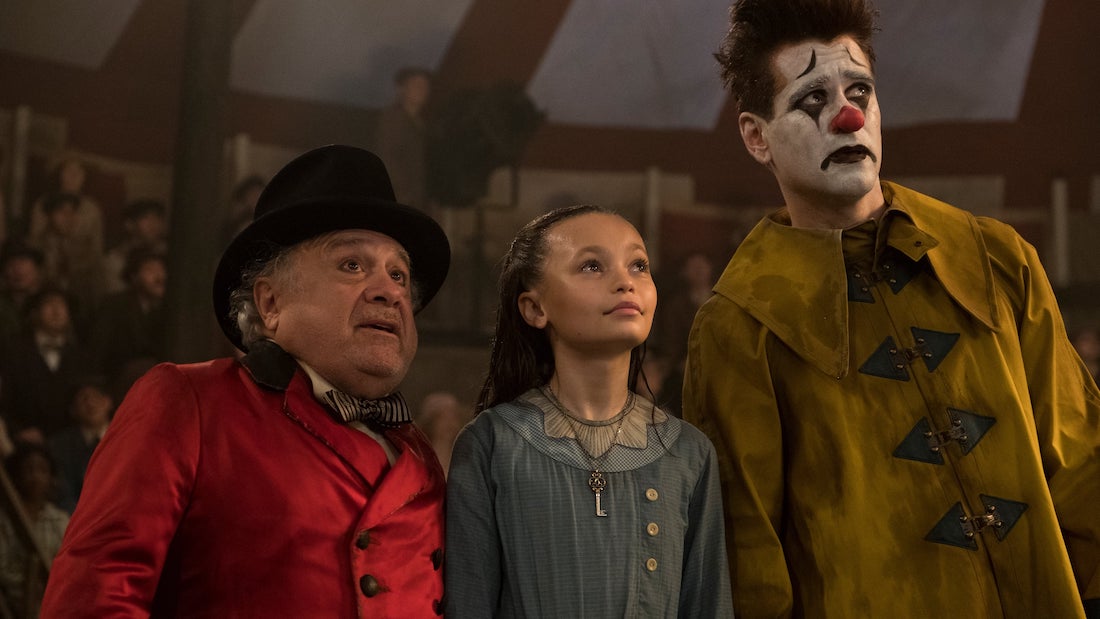 There’s no doubting the digital Dumbo is one of the cutest animals to ever grace the big screen, as his little face and big eyes will melt the coldest of hearts. It’s just a shame designer Michael Kutsche can’t make the human cast as animated as he makes the eponymous flying elephant. This film has the technology to make photo-realistic Dumbo, but they don’t appear to know what to do with him, as he either curls up looking sad or wobbles while standing on dizzying platforms.

The core issues of Dumbo are down to the screenplay by Ehren Kruger (who was behind three of the dreadful Transformers films), as he’s crafted a stilted and predictable story. Dumbo is a tale that fits Burton’s interests like a glove, being a classic narrative concerning misfits and outsiders fighting to escape a society that considers them freaks. Sadly, the script doesn’t let Burton indulge in his love for oddballs and instead panders to making its audience feel sad. It piles on the melodrama and suffers from having no well-executed set-pieces, musical numbers, or performances so gloriously camp they become iconic.

This live-action adaptation is, ultimately, just a pleasant and safe filmgoing experience. It’s not unenjoyable but it lacks the emotional hook of the cartoon. So while it won’t leave fans of the original feeling cheated and unhappy, it’s unlikely to replace their love for the faster-paced ’41 version. It’s a cautionary tale that’s perfect for a family trip to the cinema, but a disappointment for anyone expecting to see Burton at his best.

Written By
Amelia Harvey
More from Amelia Harvey
The 70th Cannes Film Festival concluded on 28 May with a glittering...
Read More