Rawhead Rex first appeared in the story of the same name, in volume three of Clive Barker’s Books of Blood, published 1984. It’s one of the strongest tales of any in those ground-breaking, game-changing horror anthologies. I loved the story so much that, when George Pavlou’s film adaptation came along, I deliberately avoided it. I’d seen stills of the monster make-up, which looked terrible, and nothing like how I’d imagined Rawhead. So, I’m afraid to say I pretty much dismissed it offhand.

Now, with Arrow Video’s new Blu-ray release arriving decades since my last reading of the story, I seized upon the opportunity to reassess the 1986 movie. I’m glad I did, because, despite lacking any of the depth and subtleties of Barker’s original story, with cheesy effects that haven’t aged well, it now amounts to good retro ’80s fun. 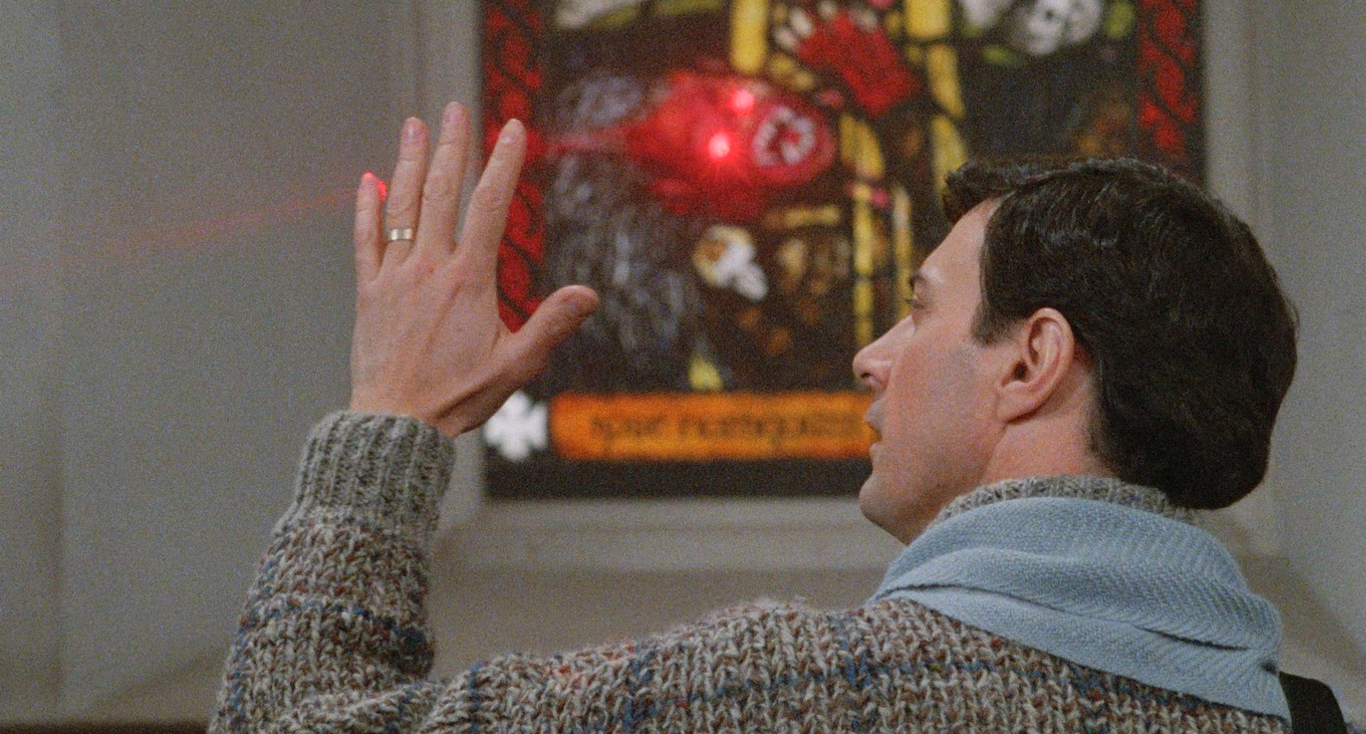 The opening shots of a car driving through unremarkable countryside seem very familiar. I was thinking of Bank Holiday family outings from childhood, maybe. Then, as the car approaches a village and eventually a churchyard ringed with standing stones, I realised I was recalling the opening sequence to Children of the Stones (1977)…

In the classic ITV series that spooked a generation of Brits, Adam Brake (Gareth Thomas) is a scientist investigating the ancient megaliths at Avebury with his young son in tow. In Rawhead Rex, Howard Hallenbeck (David Dukes) is an American researcher looking into the persistence of ancient sacred sites in Ireland and is joined by his son, Robbie (Hugh O’Conor), plus the rest of the family: younger daughter Minty (Cora Venus Lunny) and wife Elaine (Kelly Piper). Inside the church, strange stained-glass windows depict a fiery-eyed devil, seemingly buried under a great stone. Just like Children of the Stones, Rawhead Rex sits solidly in the folk horror tradition. 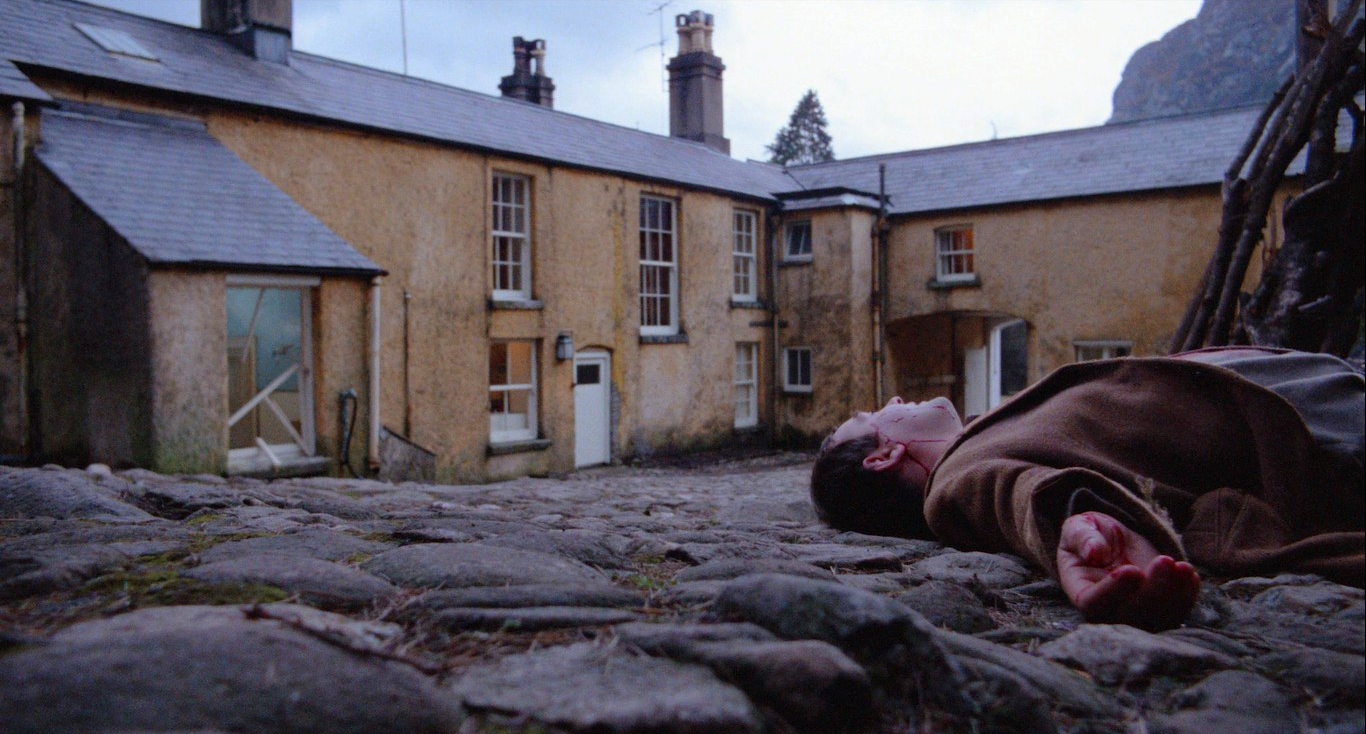 In a local field, three men are attempting to move an impressive, somewhat phallic megalith. And when the dislodged stone eventually uproots itself during a freak lightning storm, an ancient evil entombed beneath is unexpectedly released. The 8-foot tall monster, with its glowing eyes and large permanently exposed fangs is obviously a man-in-a-suit, but if you can suspend disbelief, it’s pretty nightmarish stuff. I mean, I love 1950s monster movies and their creature effects are even less sophisticated.

By today’s standards, the monster seems unconvincing (I found his fuzzy ’80s mohawk the most disturbing thing about him), but for the time it represented quite an achievement. The character was the first piece of professional film concept design by Paul Catling, who since became the monster-maker’s mainstay, having designed all manner of fantastic beasts for film franchises including Harry Potter, Alien, Marvel Studios, and recent Star Wars. Apparently, the monster took just four weeks to be developed from concept, through sculpting and moulding, to shooting—including designing and making an extra, animatronic head for close-ups. 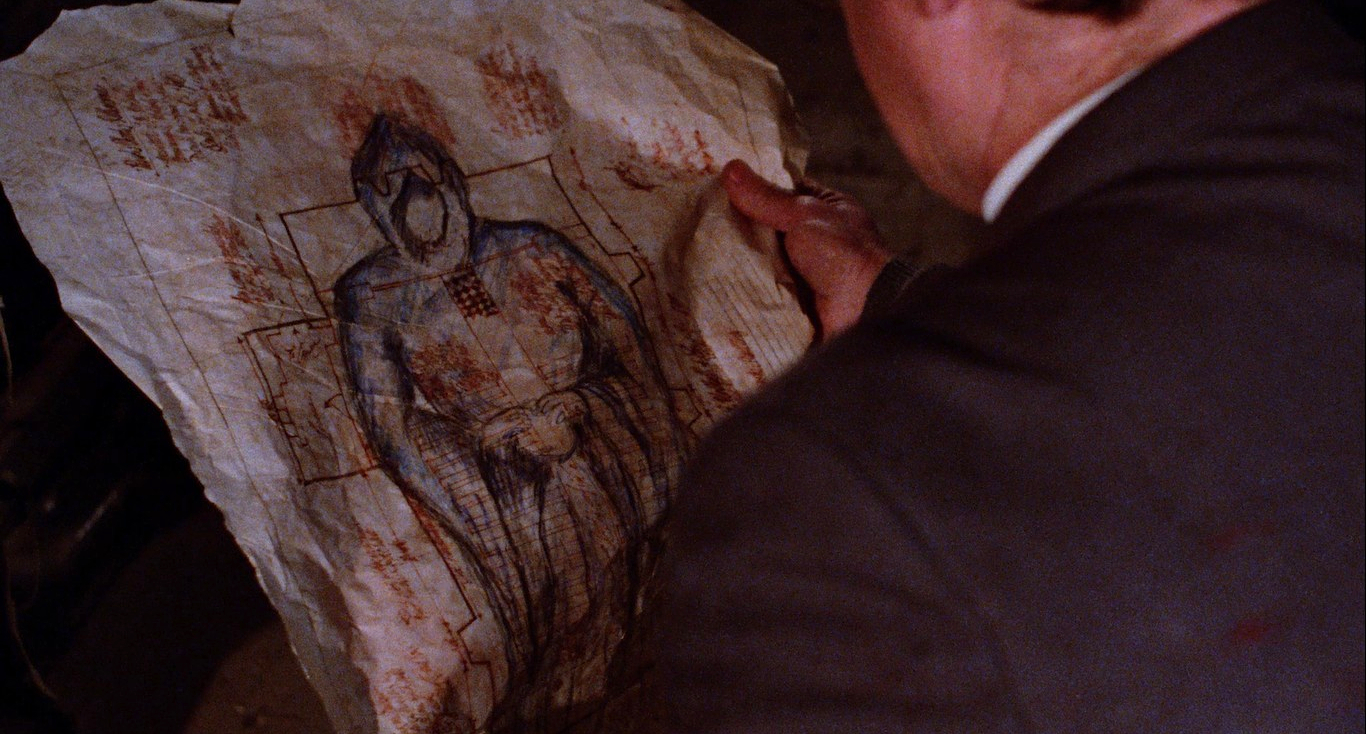 Clive Barker wasn’t too happy with the result. He’d submitted his own concept art in which Rawhead resembled a tall, impossibly skinny figure—something like the later Slenderman creepypasta, but with a head like a penis with teeth. Barker’s concept would be possible now, in the age of digital effects, but back then it could only be a man-in-a-suit. And for something that tall, only an actor with muscles would be able to move convincingly in it.

Peter Mayhew, of Chewbacca fame, had been the first choice, but his fee became prohibitive. For the very first appearance, as Rawhead bursts from the earth, Catling wore a version of the suit himself. For the rest of the movie is was a teenage Heinrich von Schellendorf, in his only screen role. From certain angles, in well-controlled lighting, the monster actually works very well. 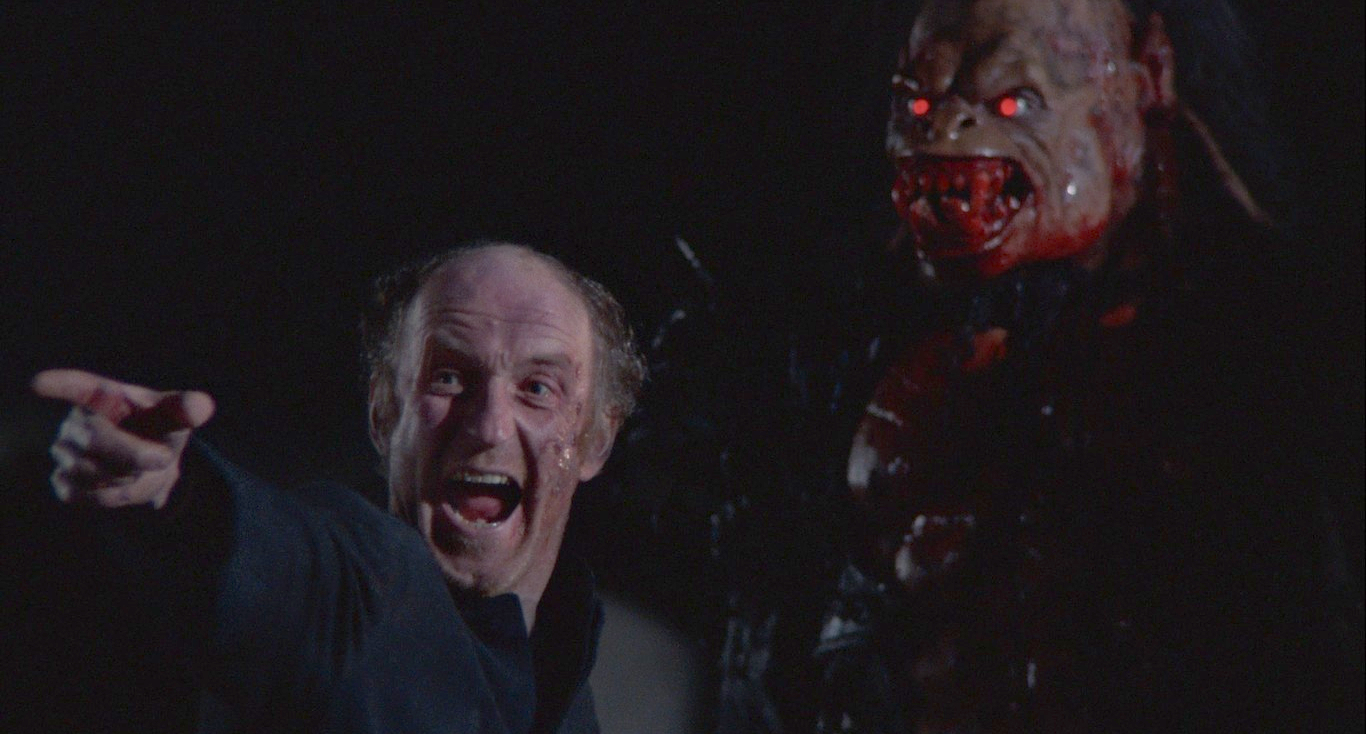 I wouldn’t be surprised if the makers of Predator (1987) hadn’t learnt something from Rawhead; after all, the original Predator was a man-in-a-suit with an animatronic head for close-ups, which even had a variation on Rawhead’s two-stage jaw idea.

In an early scene, Rawhead seeks refuge in a barn, only to be disturbed by the farmer. He has no compunction in quickly killing him, but after smashing his way into the farmhouse in pursuit of the wife, he stops short when he sees that she’s pregnant. There is a close parallel in Predator 2 (1990), but we learn that Rawhead’s motivation for sparing the mother-to-be is entirely different. And a cut to Rawhead carrying the severed head of a victim is almost identical to the decapitation of voodoo gang leader King Willie… 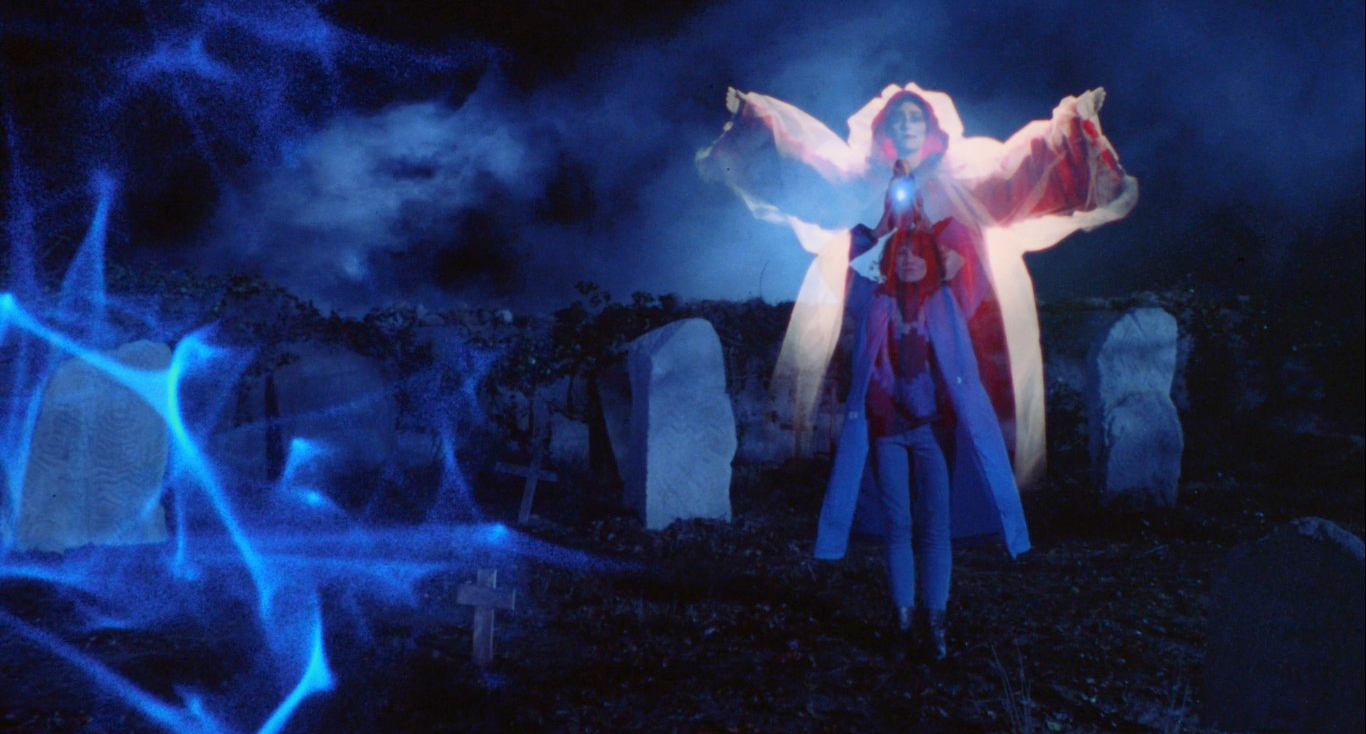 Director George Pavlou, producer Kevin Attew, executive producer Al Burgess, writer Clive Barker, and prosthetic effects technician Peter Litton had just worked together on Underworld (1985). The Irish actors were cast from a seemingly small pool of talent where many had already worked together, bringing with them existing relationships and rapport. This must have helped make the punishingly short preproduction and rehearsal times more effective. Nevertheless, it was a production beset with problems, largely stemming from a very tight schedule and a budget that didn’t match the director’s ambitious plans.

It makes up for its shortcomings with an exuberant B Movie aesthetic and some full-on performances. David Dukes is fine in the lead, though perhaps a little workmanlike. It’s Ronan Wilmot that steals the show with his over-the-top performance as the church verger, Declan O’Brien, who’s seduced by the dark side and becomes the servant and willing victim of Rawhead, giving himself up with an ecstasy verging on the orgasmic. 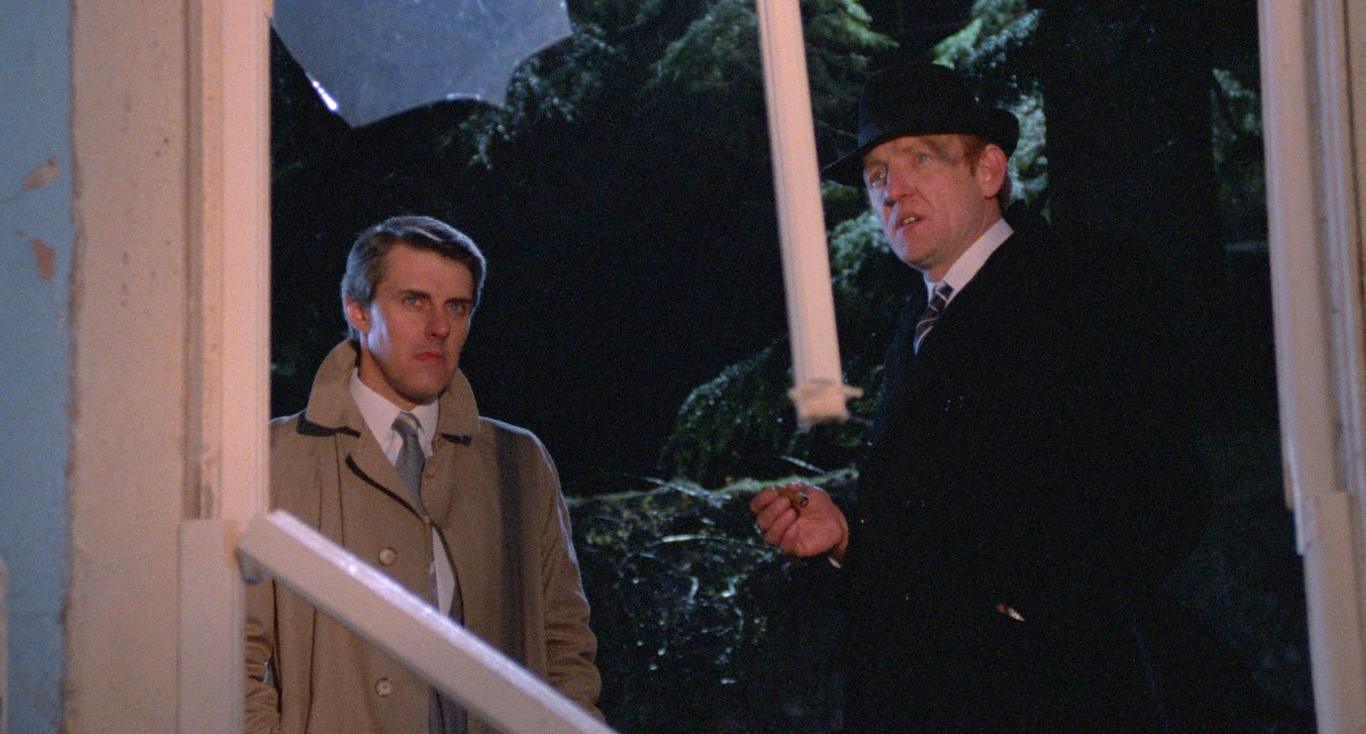 There are moments of dark humour, too: Mr. and Mrs. Hallenbeck are locked in a passionate embrace when they’re interrupted by a diminutive lady wearing a red duffle coat. They allow her to pass and she glances back over her shoulder, shaking her head disapprovingly. “She reminds me of something…” muses Elaine Hallenbeck. Of course, this is a geekish visual pun put in for the amusement of horror buffs who will instantly recognise the reference to Don’t Look Now (1973), but also serves as a warning that no character is safe in this movie… alas, its finale is nothing as profoundly disturbing or indelible.

Instead we have a sort of Raiders of the Lost Ark (1981) ending, where an ancient artefact unleashes supernatural judgement, represented here with some TV-standard video effects and animated blue scribbles… by this stage, the budget had run out and the remaining crew were working for free. Kudos to Pavlou for persevering. 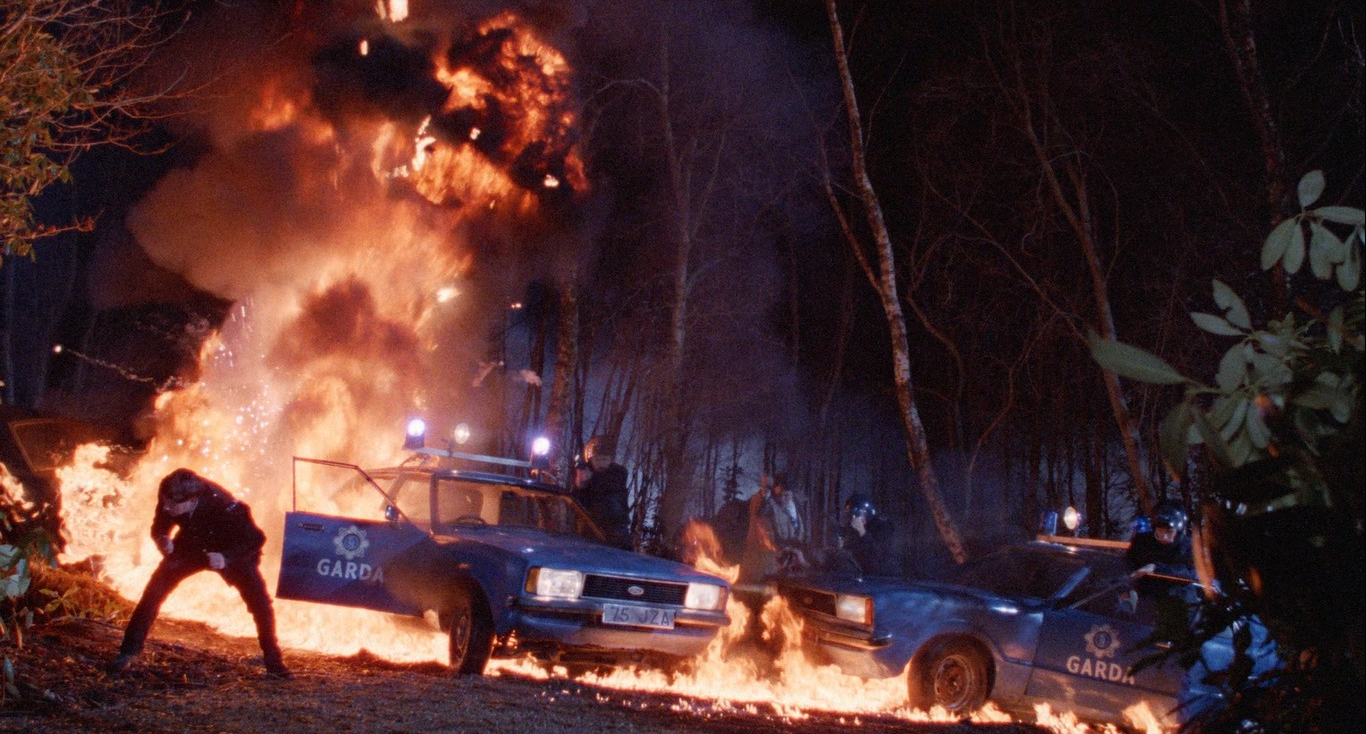 Barker let it be known that he was unhappy with the results. Which brings us to a more positive outcome from all this… because, following his disappointment with the production, Barker insisted that he’d direct his next screenplay: Hellraiser (1987). He’s since discussed a Rawhead Rex remake, with himself directing, but the project was shelved due to his commitments to the planned Hellraiser reboot, which in turn now seems stuck in development hell.

Barker once told me, “I don’t take movies as seriously as I take books. And never will.” What made the Rawhead Rex short story so effective was that we were allowed inside the creature’s thoughts and given its alternative understanding of things. He had an inner life and, providing you could get along with his total ambivalence toward humans, he was almost sympathetic. He comes across as a likely pal for the version of Grendel portrayed in John Gardner’s 1971 novel that also made the monster the protagonist, with the mind of a French philosopher. I recall the rather poetic scene where Rawhead chills out on the hillside, enjoying a countryside vista, recalling how it had been before mankind had destroyed much of it. Of course, Barker pushes the envelope here as expected and has his beastie relishing the organs from an eviscerated child, just as we might relax with a box of fine chocolates. 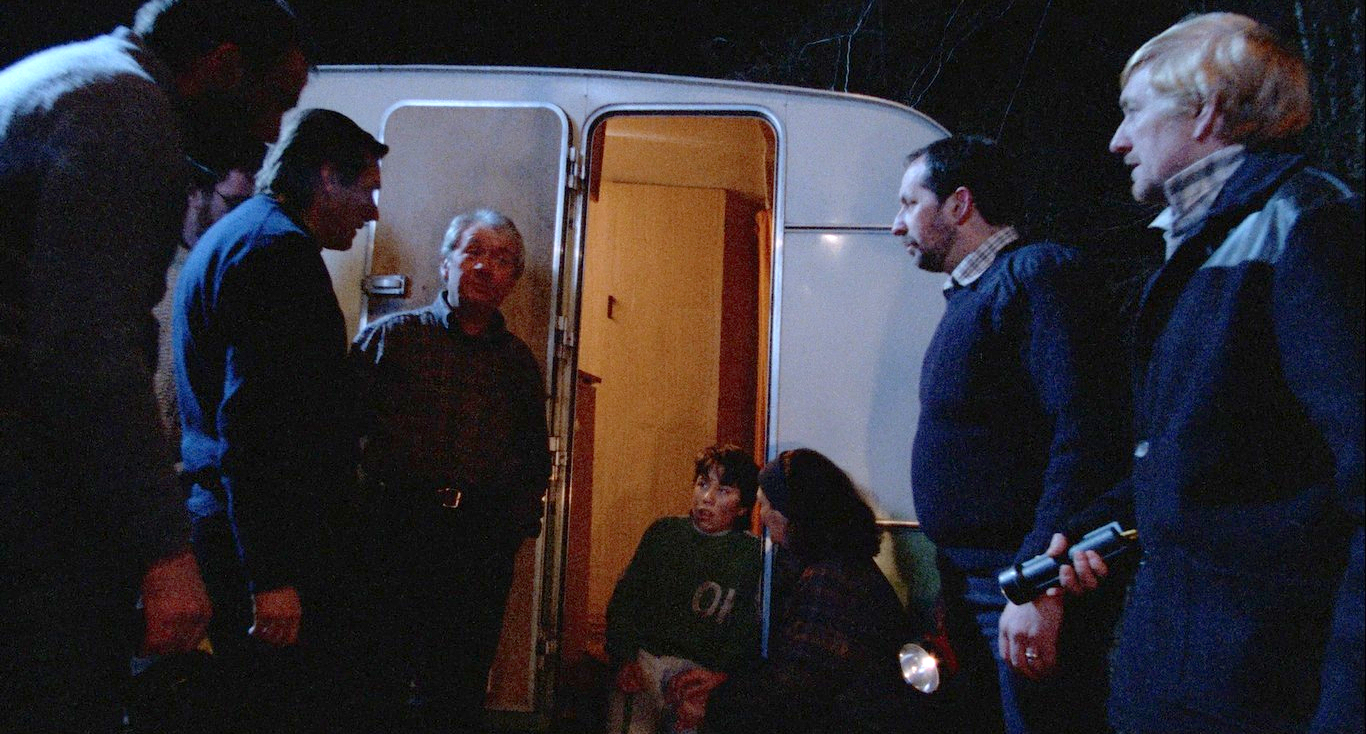 The film, though still gory, tones things down a bit and dispenses with any sympathetic treatment of the resurrected pagan ‘god’, reducing him to a rampaging monster straight out of a heavy metal music video. It’s nowhere near as transgressive as the short story, but we do still have infanticide, gratuitous nudity and a priest being baptised in steaming piss.

It seems the film is playing a game with the BBFC, who were enjoying their newfound powers in the wake of the 1984 Video Recordings Act. So-called ‘video nasties’ had flooded the UK home rental market in the late-1970s and first half of the ’80s. These had created an appetite for explicit exploitation horror with lashings of blood and nudity and not much sense. 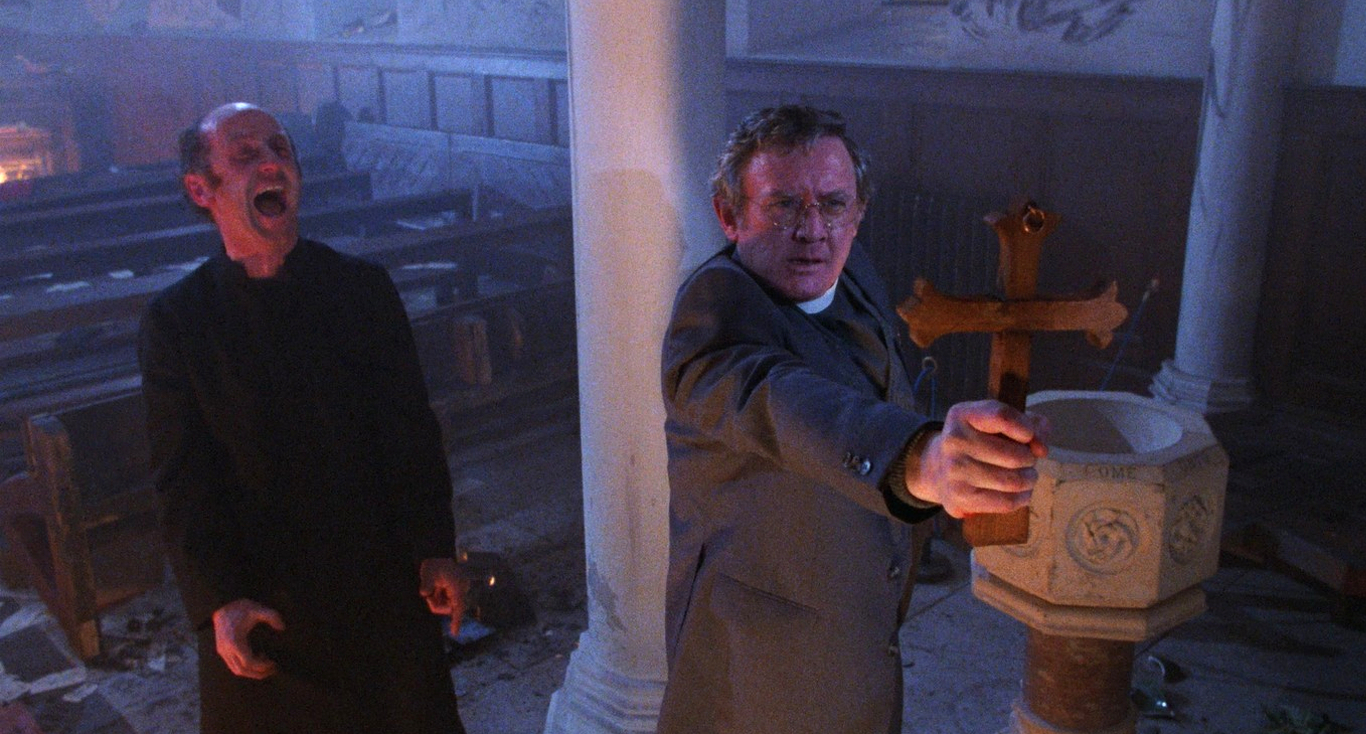 Rawhead Rex has one eye on the VHS rental market and clearly aims to please this bloodthirsty audience, whilst trying to avoid undue attention from the censors, who were on a clean-up crusade

With the expected 18 certificate it still performed poorly at the UK box office. An edited version was rated R by the MPAA and given a limited theatrical release in the US. It was cut to varying extents for different territories, the most severely for its German release, and was banned outright in Iceland. It did better business on video and, although it did lose three-and-a-half minutes to the censors, it steadily built a cult following. This new Blu-ray edition from Arrow Video has been restored to its full 89 minutes and 35 seconds, and passed uncut with a 15 certificate. How times have changed! 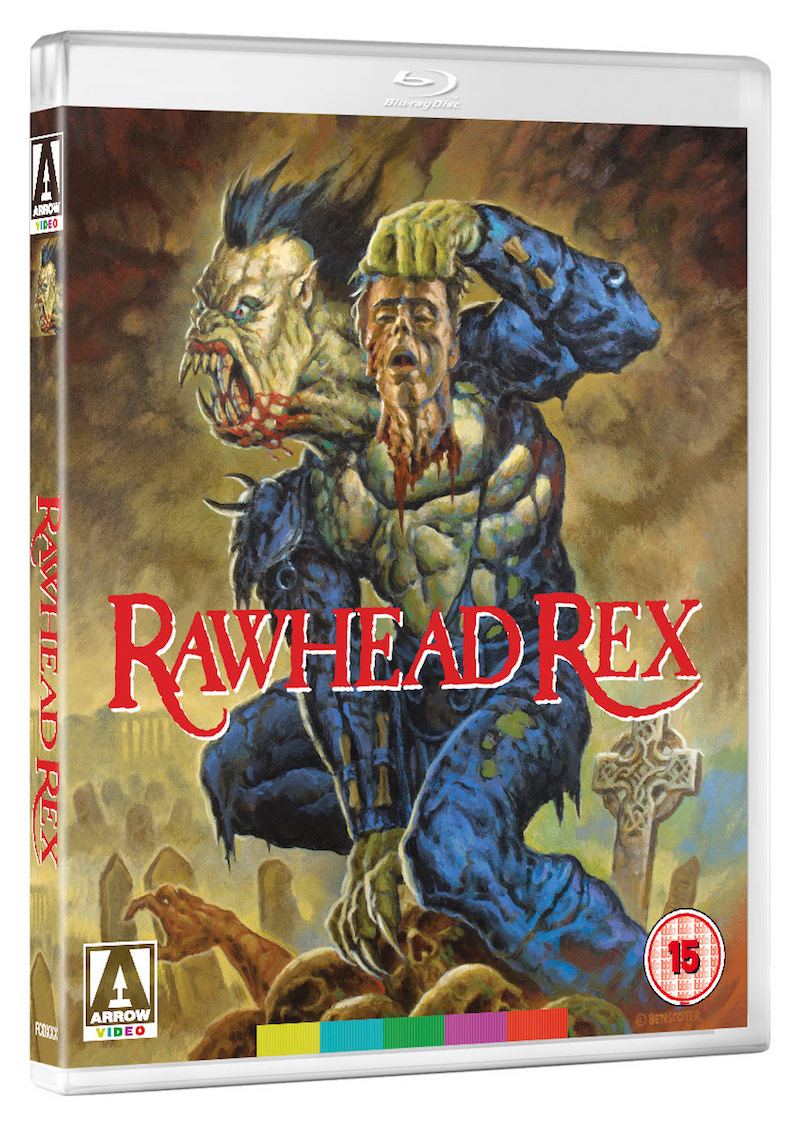