How on earth do you follow Brian De Palma’s exceptional Carrie (1976)? It’s a colossus of horror cinema, one of the best Stephen King adaptations, and remains a very influential film to this day. But an unnecessary sequel was put into development around 1996, then known as The Curse, with Emily Bergl attached to star, telling a story inspired by a real incident from 1993 where a group of high school boys carried out a spate of sexual attacks and rapes of young girls and kept a point system of their crimes.

The Curse got stuck in development for a few years until Robert Mandel (School Ties) signed onto the project, now known as Carrie: Say You’re Sorry, and began shooting with Bergl still in the lead. Unfortunately, Mandel quit after only a few weeks into production, citing that old chestnut of “creative differences”, and was hurriedly replaced by Katt Shea (Poison Ivy). The actor-turned-director only had a week’s preparation and had to reshoot two week’s worth of Mandel’s footage, but got the movie made for $21M. 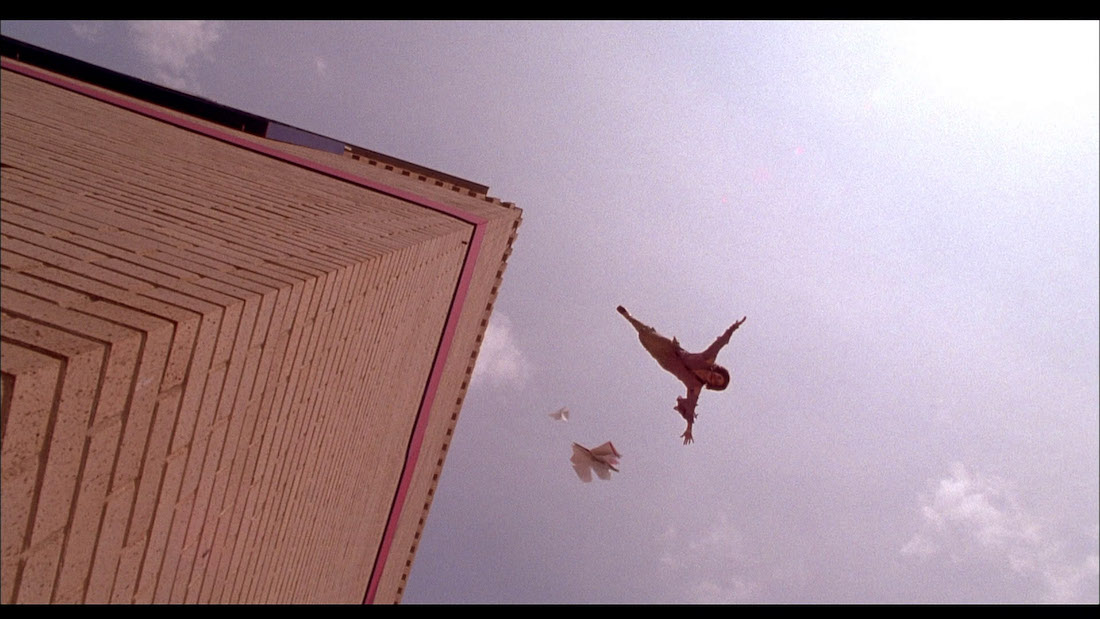 The Rage: Carrie 2 (hereafter The Rage) concerns Rachel Lang (Kayla Campbell), whom we eventually learn is the half-sister of infamous Carrie White, the timid teen who razed her school to the ground ago after being humiliated on her Prom Night. It seems Rachel and Carrie’s shared biological father had a thing for crazy chicks, as the film opens with Rachel’s mother Barbara (J. Smith Cameron) being carted off to the funny farm after painting their house red to protect her young daughter from “the devil”. Jump forward a number of years and Rachel is now a high school teenager (Bergl) living with foster parents she hates. She has a close bond with a girl called Lisa (Mena Suvari) at school, but after Lisa commits suicide after being spurned by the jock she lost her virginity to, the shock of Lisa’s demise helps awaken Rachel’s dormant telekinesis…

This tardy sequel bombed at the box office in 1999, making only $17.8M amidst poor reviews. It’s certainly not a patch on the original—how could it be?—but the script by Rafael Moreu (Hackers) manages the difficult challenge of redoing Carrie with modern updates and a few tweaks on expectations. The Rage is hamstrung by being a sequel, as the lineage of Rachel as a secret relative of Carrie, who happens to live in the same town and also has a fruitcake mother, is awkwardly handled. It almost feels like it’s only a sequel because they managed to get Amy Irving back as Sue Snell, the sole survivor of Carrie’s rampage who’s now a guidance counsellor. Irving was uneasy about returning to this role until she got De Palma’s blessing, but the film would’ve worked better as a straightforward remake—which it essentially is when not reminding you of its predecessor. Of course, being a remake wouldn’t require the use of clips from Carrie, which gives the film a sense of legitimacy despite its weaker pedigree. 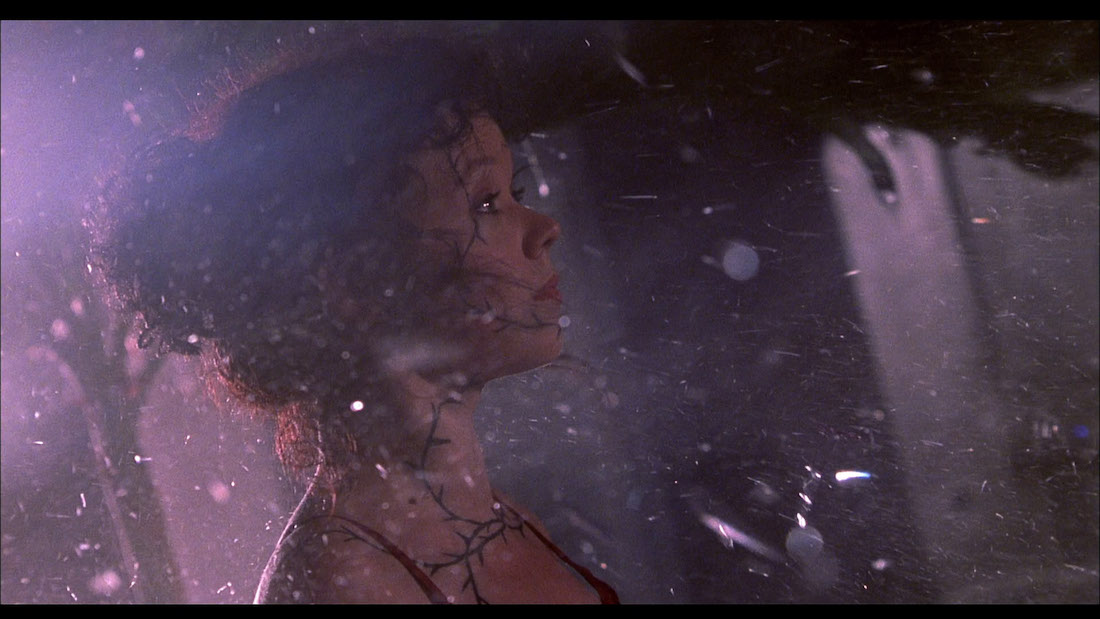 Moreu’s screenplay isn’t a masterful way to tell a story where history repeats itself, but I did enjoy the different approaches to things expected of a Carrie story. Rachel is a social pariah and virgin like her half-sister, but she wasn’t raised in seclusion by a religious zealot because the authorities thankfully intervened when she was a little kid… so she’s no pushover. She just doesn’t like her foster parents and wants to hang out, wear grungy clothes, listen to Billie Holliday, and cuddle her basset hound. 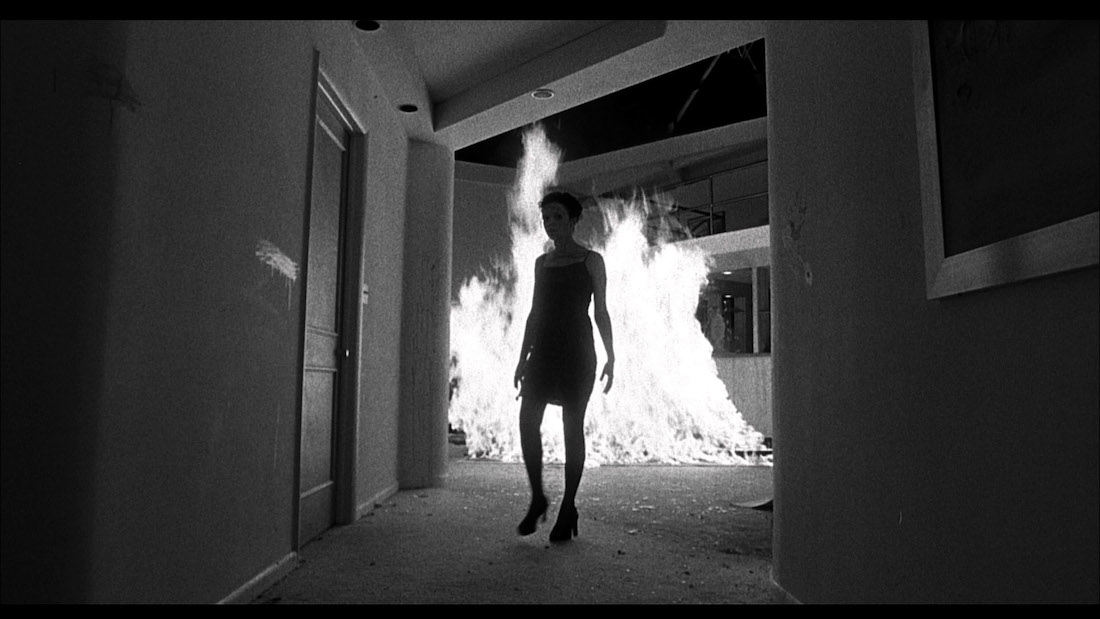 It’s actually her new boyfriend Jesse (Jason London) who gets “bullied” throughout the film, as he’s part of the macho football team and is trapped between having to be “one of the guys” and embracing the more good-natured persona Rachel sees after he helps her injured dog. One could argue Jesse’s arc is more interesting than Rachel’s, oddly, which is perhaps another flaw of the storytelling, but I enjoyed the switch of having the female protagonist be stronger than her male love-interest. 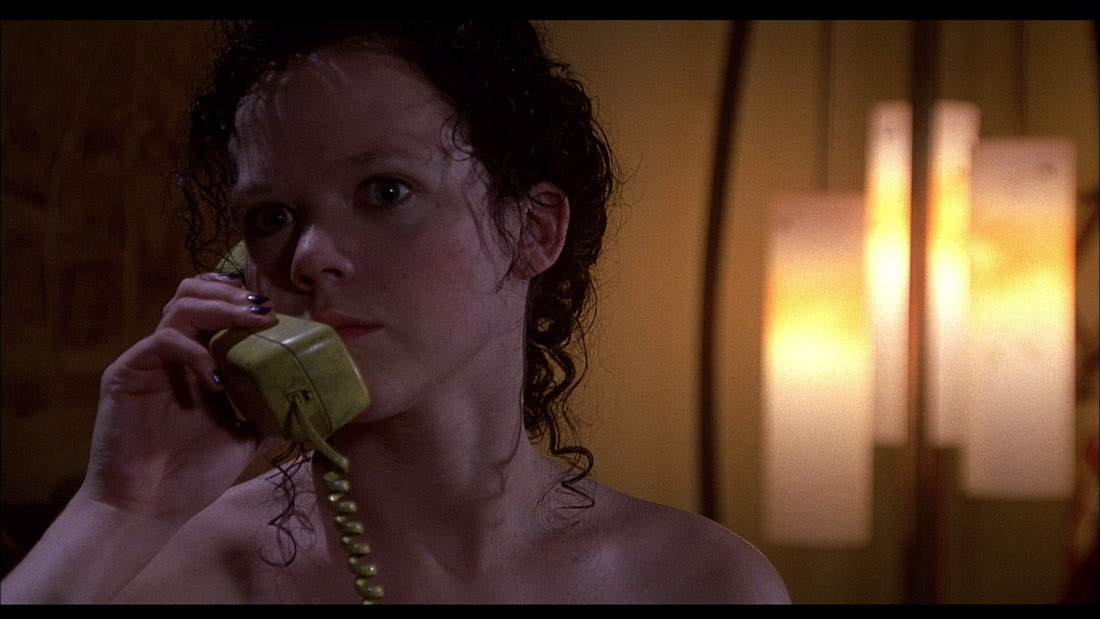 And while Carrie’s blood-soaked finale at her Prom is an unforgettable and spine-tingling sequence, The Rage crafts something that’s entertaining enough. I liked how the extreme humiliation Rachel suffers is more insidious and personal, involving a sex tape and the apparent realisation her boyfriend’s a scumbag, rather than a disgusting and embarrassing prank. It’s less visual and iconic than Carrie getting coated in pig’s blood and laughed at out of pity, but it felt more personal and rooted in the story that had been unfolding. And as I mentioned, the fact the script used the real-life “Spur Posse” incident as the basis for how Rachel is apparently victimised by her lover, gives the film some extra points. 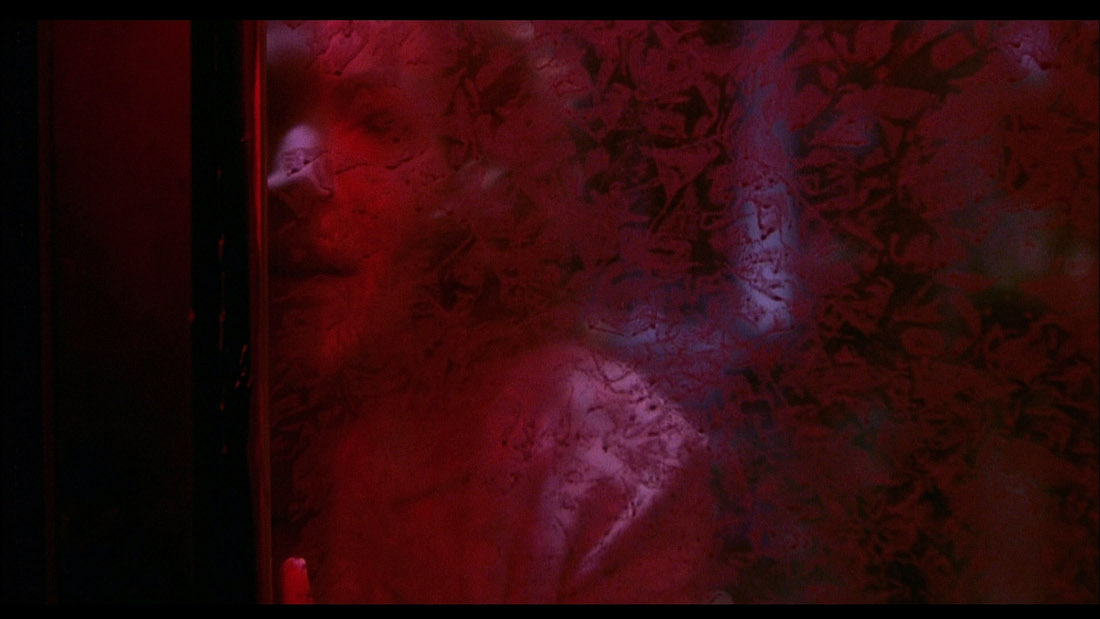 The problem with The Rage is how it feels like a straight-to-video cash-in and isn’t very cinematic, although the finale orchestrates a few good kills, and I loved the way Rachel’s rose tattoo travels all over her body once her power is fully awakened. Katt Shea gets good performances out of the cast, having been an actress herself in the likes of Pyscho III (1986), but she’s obviously no De Palma behind the camera. She makes a strange decision to have the colour switch to monochrome whenever Rachel’s powers bubble to the surface, for example, which I didn’t like. But the performances are better than expected, with Bergl and London both very sweet and relatable, while Zachary Ty Bryan is memorably hateful as lead jock Erik Stark. The only slight disappointment is the “mean girls”, led by Monica (Rachel Blanchard), aren’t awful enough and get overshadowed by the despicable horny meatheads.

We didn’t need a sequel to Carrie and perhaps shouldn’t have got one, as this might as well have been a remake, but The Rage isn’t a total dud. The performances are fine and some of the updates to the story work well for the late-’90s milieu, even if there are stretches where your mind may start to wonder because you know where this is headed. The finale isn’t as vicious or well-choreographed as Carrie’s psionic slaughter, or the 2013 remake’s grander destruction (a movie I prefer over The Rage), but emotionally it gets more right than wrong. 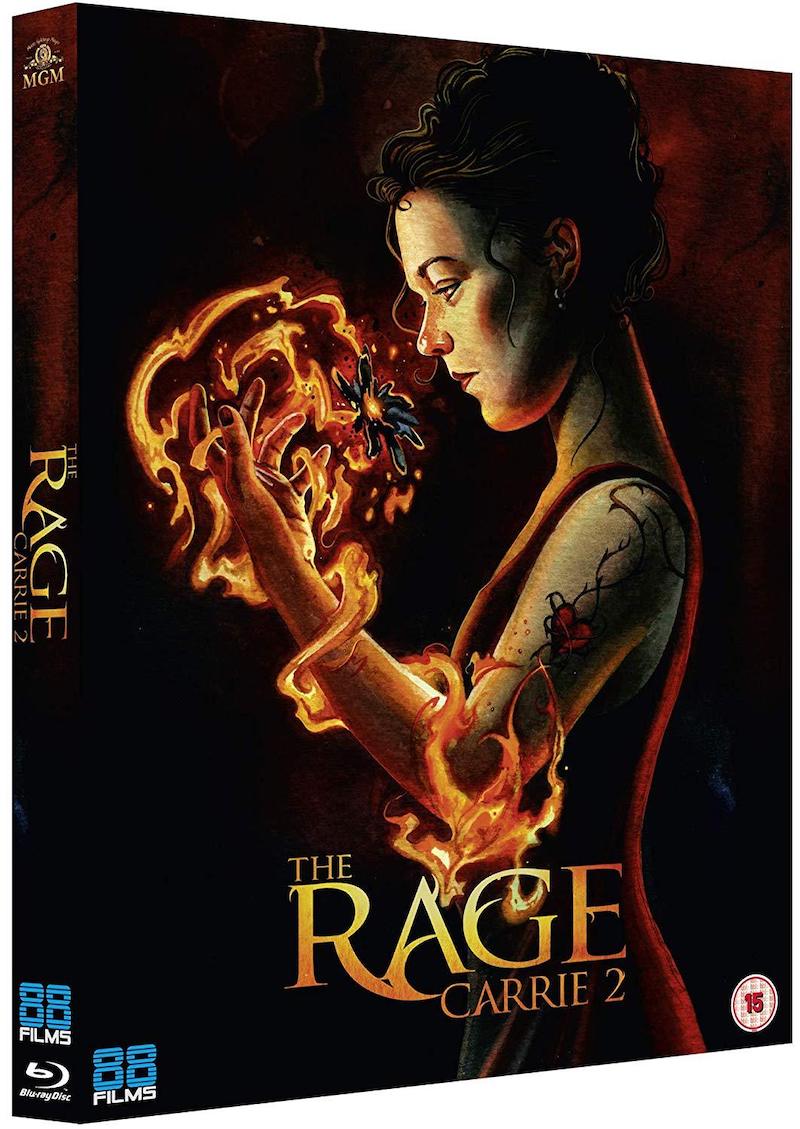 Originally shot on 35mm using Panavision cameras, the 1.85:1 1080p picture quality of this Blu-ray from 88 Films is surprisingly detailed and colourful, with strong blacks and a wonderfully filmic appearance. There’s occasional damage to the source material that appears as tiny scratches, but nothing too distracting. The film can be watched with its original stereo (DTS-HD Master Audio 2.0) soundtrack or with a full-blown DTS-HD Master Audio 5.1 re-mix. I’d opt for the latter, even if much of the sound stage stays up front and only occasional moments take advantage of the rear channels. Dialogue is natural and the bass lends nice weight to a few moments. 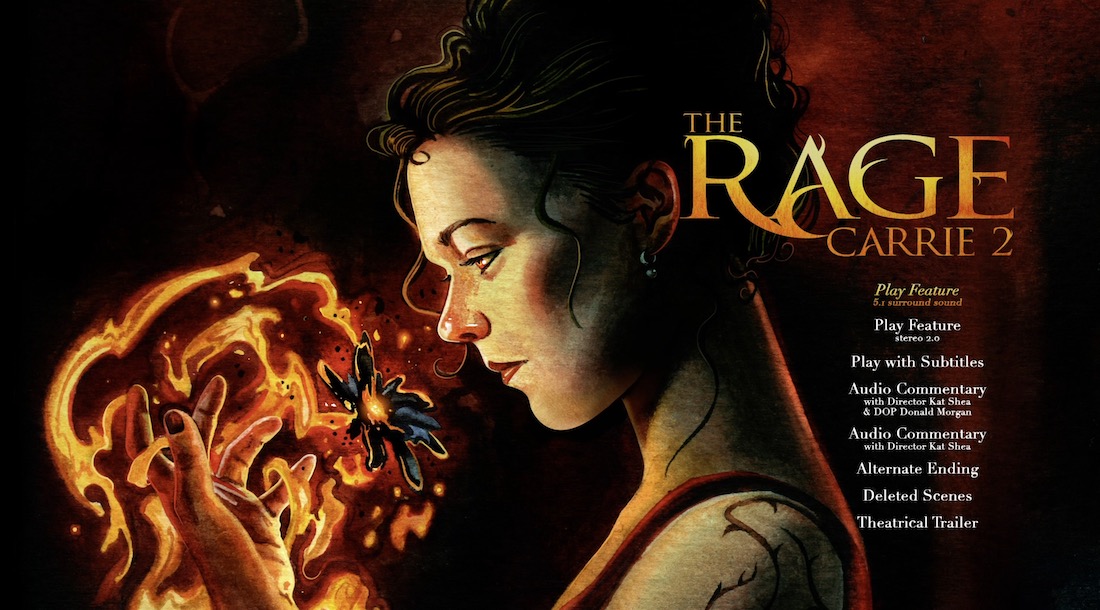