In recent years, the South by Southwest (SXSW) film festival in Austin, Texas, has grown to become a key launchpad for many highly anticipated movies. If the Toronto International Film Festival (TIFF) and Sundance had a rebellious cousin, it would be SXSW. Cabin in the Woods (2012), Furious 7 (2015), and Ready Player One (2018), all debuted at SXSW, and now 2019 has delivered a new round of hits-in-waiting.

All anyone’s talking about is Jordan Peele’s Us, but SXSW has offered plenty of laughs, thrills, and gore. Here are some of 10 films that made a splash in Austin.

High school good girls (Ladybird’s Beanie Feldstein, Beautiful Boy’s Kaitlyn Dever) give the Superbad (2007) boys a run for their money, as the girl geeks are let loose in this coming-of-age comedy from actress-turned-director Olivia Wilde (The Change-Up). The straight-laced teens spent their high school looking down their noses at their sex and alcohol obsessed peers, but when they realise said peers have also gotten into Ivy League colleges they become determined to get to the raunchiest pre-graduation party in town so they can brag that they at least had one night of fun.

Described as a “major moment in the teen movie canon”, Booksmart is inclusive, progressive, and has been a long time coming.

This romantic comedy follows an unemployed journalist (Seth Rogen) who begins to date his former babysitter and childhood crush (Charlize Theron), who’s just become one of the most unattainable women in the world as she runs for President of the USA. Directed by Jonathan Levine (who worked with Rogen on 50/50), Long Shot takes the stock narrative of a geek proving himself to his dream girl and uses it to parody political titans like Donald Trump, Hillary Clinton, and Rupert Murdoch.

Hailed as being outrageously funny. it looks like fratboy comedy veteran Rogen’s met his match with Theron, who has previously proven her comedic timing with Young Adult (2011) and Gringo (2018).

Harmony Korine‘s first feature in seven years (after Spring Breakers) stars Matthew McConaughey as a bongo-playing poet, and that’s probably enough to sell The Beach Bum. Set in the Florida Keys, the story follows Moondog’s (McConaughey) hedonistic life filled with booze, drugs, and spoken word poetry performances. He’s trying to pull it together so he can travel to Miami to see his wife Minnie (Isla Fisher) and attend their daughter’s wedding, it’s just a shame his beloved wife is having an affair with his friend Lingerie (Snoop Dogg). The film also has a dandy literary agent (Jonah Hill), a war veteran who mistakes dolphins for sharks (Martin Lawrence), and a crazed JNCO-wearing drug addict (Zac Efron).

Korine continues to throw his audiences into an uncomfortable world of taboo, this time his observation eye turned towards Miami’s collective of misfits who chase their own personal bliss. 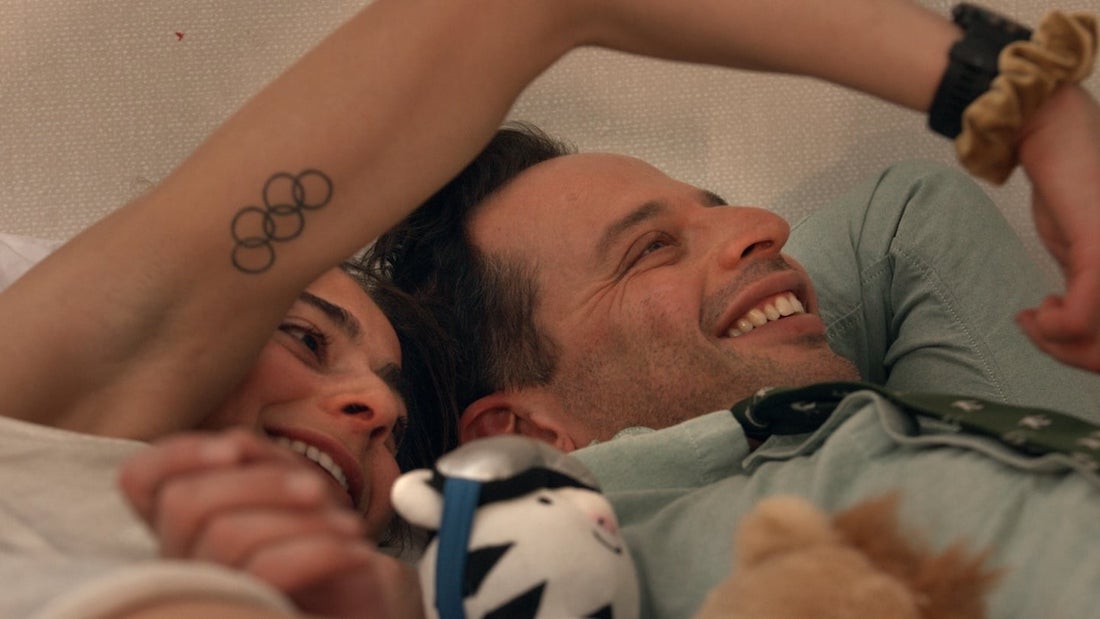 The 2019 Winter Olympics are the backdrop to this charming rom-com about the relationship between an anxious cross-country skier (real-life Olympic runner Alexi Pappas) and Ezra (Big Mouth creator Nick Kroll) as an outgoing volunteer dentist. Shot guerrilla-style with a one-man crew (Jeremy Teicher) on location at the Pyeongchang games, this sweet but predictable love story focuses on the experiences of those athletes who don’t leave the games in Olympic glory and in a media frenzy.

On paper, Olympic Dreams is yet another indie love story about a lonely man and a lonely woman bonding over their loneliness… but the guerrilla nature of this film should make it stand out. 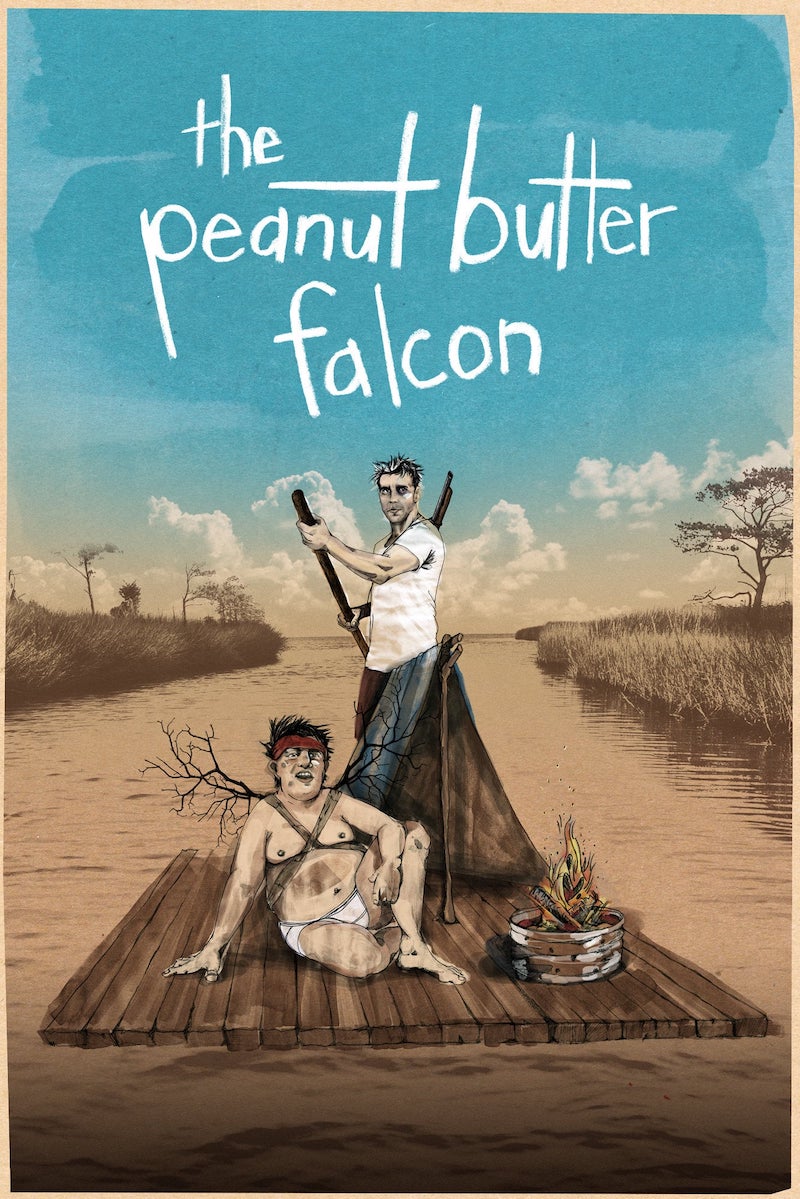 A man with Down syndrome (Zack Gottsagen) escapes his nursing home, meets up with a crook on the run, and embarks on a journey on a homemade raft to attend a wrestling school he learned about through VHS tapes. Let us not say this film isn’t original, even if it does sound like a result of a game of Mad Libs. From the producers responsible for Little Miss Sunshine (2006), The Peanut Butter Falcon stars Shia LaBeouf as the outlaw fisherman and was made for Gottsagen to star in after the directors (Tyler Nilson and Mike Schwartz) met him at a camp for disabled actors eight years ago.

This timeless story has been compared to a Mark Twain adventure, as it shares the same whimsical yet fearless love for adventure. There’s a rare giddy sense of optimism and possibility in this film. The Peanut Butter Falcon traverses a well-worn narrative that will remind you of your favourite stories as a kid.

Villains is a simple yet effective concept about a small group of characters in one house making a series of escalating bad choices. Bill Skarsgård (It) and Maika Monroe (It Follows) play bumbling crooks who run out of gas while fleeing the scene of a crime, then grab an opportunity to steal a car in an isolated home, only to discover the homeowners (Kyra Sedgwick, Jeffrey Donovan) are holding a dark secret.

Villains has been described as a satisfying thriller that examines the odd ways couples love each other without losing its confident, wicked derangement.

Good Boys is a rare male-centred comedy concerned with kindness whilst still offering a healthy dosage of drugs, sex, and excrement. Directed by Gene Stupnitsky (Bad Teacher), it centres on three 11-year best friends (Jacob Tremblay, Brady Noon, Keith L.Williams) who are convinced that the “Kissing Party” they’re about to attend will define their future marriages. These boys are pure goodness, only amplified by their naivety, worried about consent with the viewpoint that drug use by responsible adults is equal to murder.

Few recent comedies have been this crude yet lack any viciousness. Nothing has made SXSW audiences gasp like hearing tween actor Jacob Tremblay (Room) use the f-word within the first five minutes of Good Boys.

The Art of Self-Defense

Described as Fight Club (1999) remade by the Coen brothers, The Art of Self-Defense centres on Casey (Jesse Eisenberg), a socially awkward accountant constantly mocked by his co-workers for learning French and still having an answerphone. One fateful night, Casey is mugged, so he joins a local dojo led by a charismatic sensei (Disobedience’s Alessandro Nivola) in an effort to protect himself from harm.

On paper, this sounds like another tale of finding yourself, but the set up is instead used to explore how impressionable young men are seduced by toxic communicated in search of power and respect. This isn’t the black comedy 2019 asked for, but it’s certainly one it needs.

Long-time horror producer and anthology filmmaker Roxanne Benjamin makes her feature directorial debut with Body at Brighton Rock. The film centres around a young and inexperienced park ranger (Karina Fontes) who gets lost in her own park and stumbles upon a dead body. When she’s told to stick with the corpse until help arrives, her paranoia sets in…

Body at Brighton Rock is a promising debut from Benjamin, who delves into our relationship with communication and how the mind can play tricks when left alone with its own fear. Not described as polished, horror fans will wait with baited breaths for her what this exciting director does next. 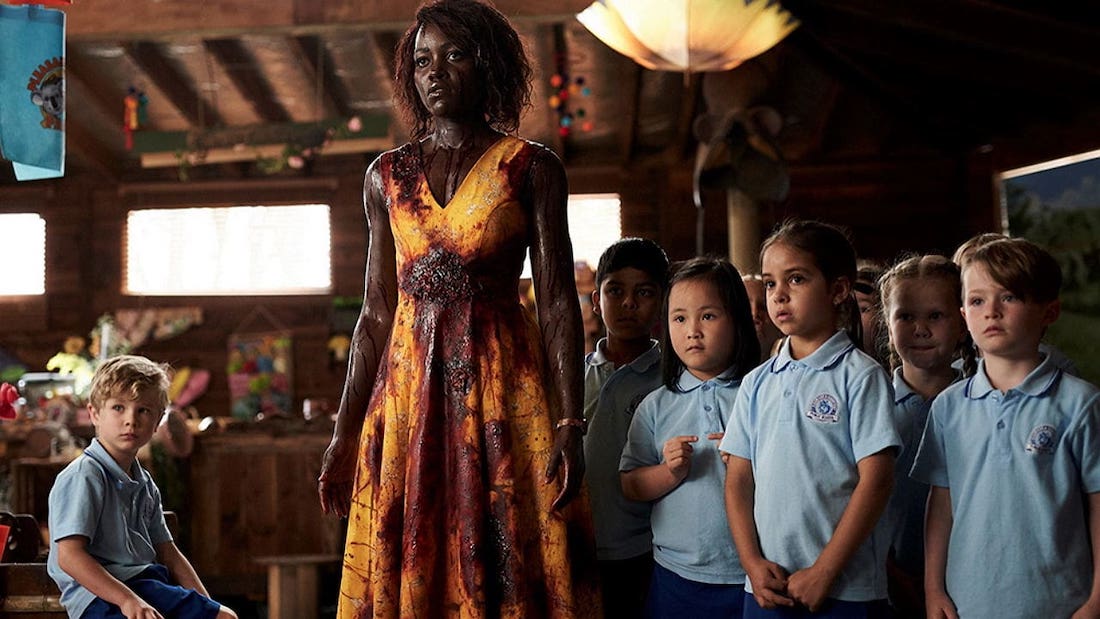 Australian writer-director Abe Forsythe‘s new film has been described as “Zombieland meets Kindergarten Cop” for how it mixes raunchy comedy with feel-good elements and violent horror.

Dave (Alexander England) is a washed-up musician living with his sister (Kat Stewart) and her five-year-old son. Dave’s directionless and about to be kicked out, so he aims to impress both his sister and his nephew’s kindergarten teacher (Lupita Nyong’o). But it all goes wrong when Dave agrees to chaperone a field trip to a petting zoo which happens to be next to a government testing facility…

Little Monsters is up there with the best ‘zom-rom-coms’, Nyong’o stealing the show as a teacher who seamlessly goes between singing Taylor Swift on the ukulele to decapitating zombies.

Boyz in the Wood

Music video director Ninian Doff‘s makes her feature debut with Boyz in the Wood, a thriller about four teenage delinquents (Lewis Gribben, Rian Gordon, Viraj Juneja, Samuel Bottomley) who are dropped into the Scottish Highlands to earn a Duke of Edinburgh Award. Suddenly The Duke (Eddie Izzard) appears out of nowhere and starts shooting at them with a rifle. The director’s music video credentials are evident throughout, with an abundance of musical sequences, hallucinogenic cutaways, and animated visuals that detail character history.

Boyz in the Wood has been compared to Attack the Block (2011) and Hot Fuzz (2007) with its UK-centric blending of film genres. 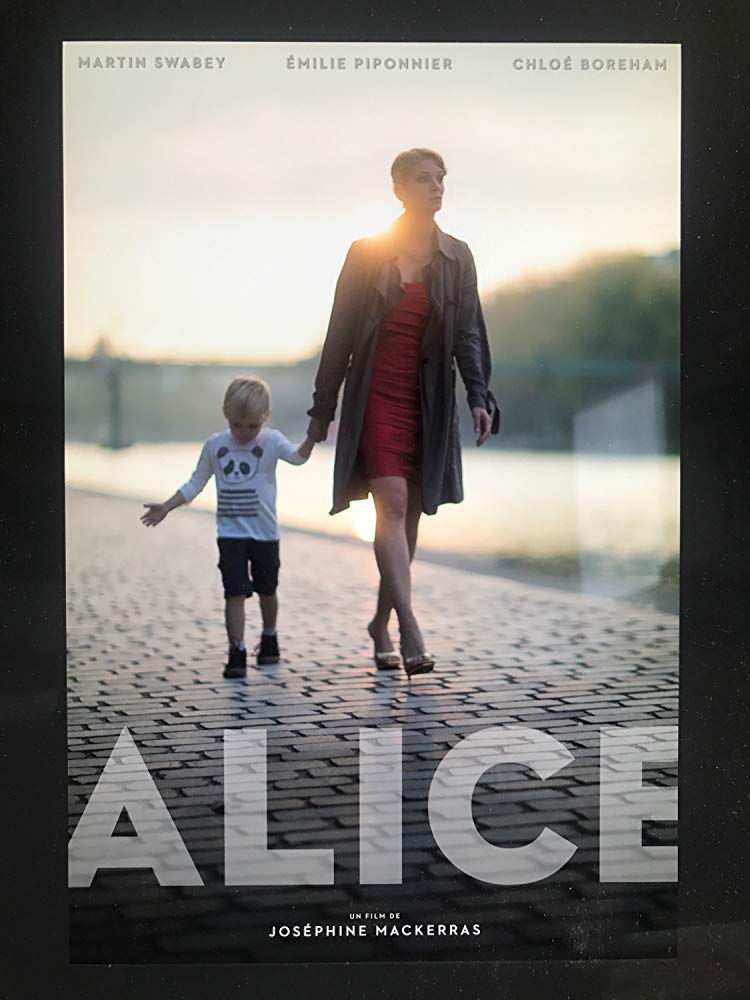 Alice, the winner of the Jury Prize in the narrative competition at this year’s SXSW, follows the eponymous Alice (Emilie Piponnier), a complacently happy woman who discovers her husband has squandered all their money on prostitutes and has made them a year behind their mortgage payments. So, in an attempt to raise some urgently needed funds, Alice becomes a high-end escort.

Debut features director Josephine Mackerras makes a heavy subject light with an injection of comedy and an aching honesty. Alice is a film about discovering your own version of freedom and that mistakes are all part of the journey.

Irish directors Mike Ahern and Enda Loughman make their feature debut with Extra Ordinary. It follows lapsed medium Rose (comedian Maeve Higgins), who’s given up talking to ghosts until a distraught father (Barry Ward) begs for her help after his late wife reappears to him as a poltergeist. The film also stars Will Forte as a one-hit-wonder pop star in desperate need of a teen virgin sacrifice, hoping Satan can help get his career back on track.

This hilariously funny film blends supernatural with the strangeness of humans. A crowd-pleaser at SXSW, Extra Ordinary delivers laughs, personality, and plenty of visual gags. 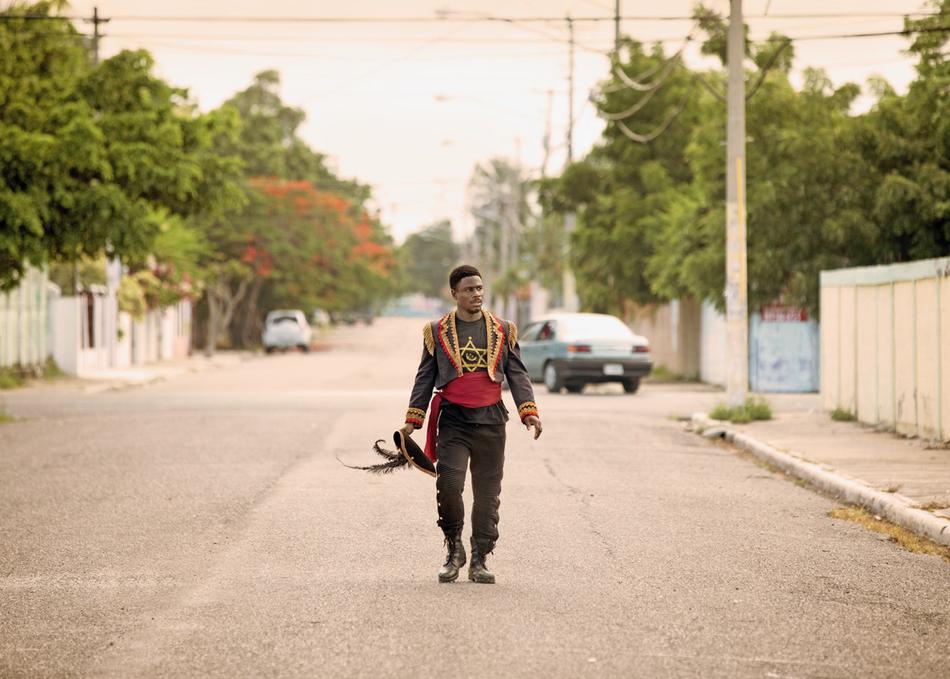 The Day Shall Come

Chris Morris (The Day Today, Brass Eye) returns with a new satirical movie, his long-awaited follow up to Four Lions (2010), which condenses many stories about the US justice system into one bitterly dark comedy.

On one side are Moses (newcomer Marchánt Davis) and his wife Venus (Orange is the New Black’s Danielle Brooks), who oversee a peaceful sect that takes in drug dealers off the street and preaches non-violence, but Moses’s unorthodox prayers put him onto the FBI’s radar. What follows is a Thick of It-style behind-the-scenes look at the FBI and their many errors. Kendra (Anna Kendrick) leads the charge with precarious intel, feeding her boss (American Horror Story’s Denis O’Hare) false hope this investigation will be good for his career. There’s a deeply uncomfortable glee to the FBI that cheer in joy at the thought of finding the next terrorist plot that can lead to a promotion.

The Day Shall Come, much like Four Lions, touches on tragic elements alongside the comedy. At a sharp 87-minutes, the film is unhinged, with its seething anger only just kept at bay. Morris is one of the few people that can say so much, yet knows the power of not saying it.

Written By
Amelia Harvey
More from Amelia Harvey
The heartbreaking and inspiring experience of survival, relapse, and recovery in a...
Read More