It Follows opens with a shot of a quiet, average suburban street, with the seeming calm of the camera’s slow pan across the neighbourhood interrupted by a terrified young woman abruptly exiting her house as she flees an unknown threat. The shot continues moving in a 360-degree pan as she pauses when her dad asks if she’s okay; she runs past him, back into the house, then runs out again, getting into her car and speeding away. The scene immediately establishes the movie’s refreshingly classical approach to building suspense—at a time when most horror films rely on shock cuts and other cheap tricks, director David Robert Mitchell demonstrates a great understanding of how to use negative space to generate anxiety. This proves to be a very effective approach for a movie about a monster defined by its deliberate but implacable pursuit of its victims, as even open spaces have a sense of inescapable menace.

The film’s heroine, Jay (Maika Monroe), is a college student living at home with her mom and sister. Jay is dating Hugh (Jake Weary), a nice-seeming guy who, for some reason, doesn’t like to stay inside for long. After they have sex in Hugh’s car, he suddenly chloroforms her; when she wakes up in an abandoned parking garage, tied to a wheelchair, he explains that he’s just passed on a curse—there’s a murderous shape-shifting entity, invisible to everyone else, who will follow her, slowly but relentlessly, and she can only rid herself of the thing by sleeping with someone else. If it kills that person, it’ll reverse its course back to Jay and Hugh and everyone else who’s passed on the curse. It’s a great premise for a horror movie, distilling the genre’s frequent juxtaposition of sex and death to a very basic and primal concept. While the movie invites a Puritanical reading, it’s actually more complicated than that—Jay wasn’t a virgin, and sex is the only way she can rid herself of the curse. It’s not that sex is evil, but something much scarier—sex is both a denial of, and an unavoidable reminder of, our mortality. 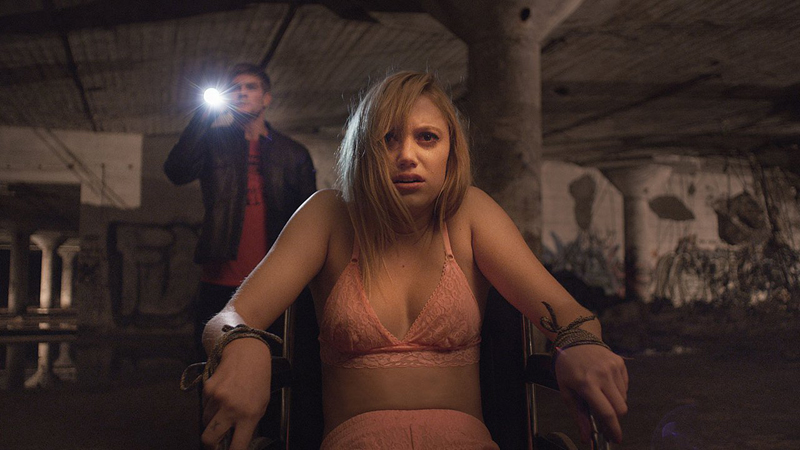 If It Follows were just a clever genre deconstruction, it’d be smart but ultimately forgettable. Thankfully, Mitchell, as he demonstrated in his first film, The Myth of the American Sleepover, has a great eye and and ear for the details of teenage life and relationships. When Jay turns to her sister Kelly (Lili Sepe) and friends Paul (Keir Gilchrist) and Yara (Olivia Yuccardi) for help, they don’t initially believe Hugh’s story, but they come together to look out for her anyway. The title’s nod to Stephen King’s It makes the most sense here, as It Follows shares with that book the idea of kids bonding together to fight a shape-shifting evil being that their parents can’t see, let alone save them from. It’s a dark movie, but not a hopeless or nihilistic one—at its core, It Follows is about how we’re all going to die, but at least we’re in it together.

The movie also benefits from Mitchell’s strong grasp of its predecessors in the genre. A lot of contemporary horror filmmakers pay homage to genre, but usually in superficial ways, like credits in Albertus font or a synth-heavy score. It Follows have an awesome, creepy synth score by Disasterpiece, but Mitchell also took the right lessons from Carpenter—cinematographer Mike Gioulakis relies on wide-angle lenses and those creepily methodical 360-degree pans to amplify our sense of dread at the entity’s next appearance. I can’t think of another movie since Halloween that’s more effectively generated scares by manipulating details in the background or periphery of shots. The photographer Gregory Crewdson, with his wide, cinematic images of seemingly normal rural and suburban locales with just one or two odd details that make the whole thing feel weird and threatening, is also a clear influence on Mitchell. There’s a great shot towards the beginning, as Jay sits in a classroom while, through a window, we gradually spot the entity walking towards her before she notices. Just the image of an old lady in a nightgown, her face chillingly emotionless, is as frightening as any cinematic monster in recent memory. 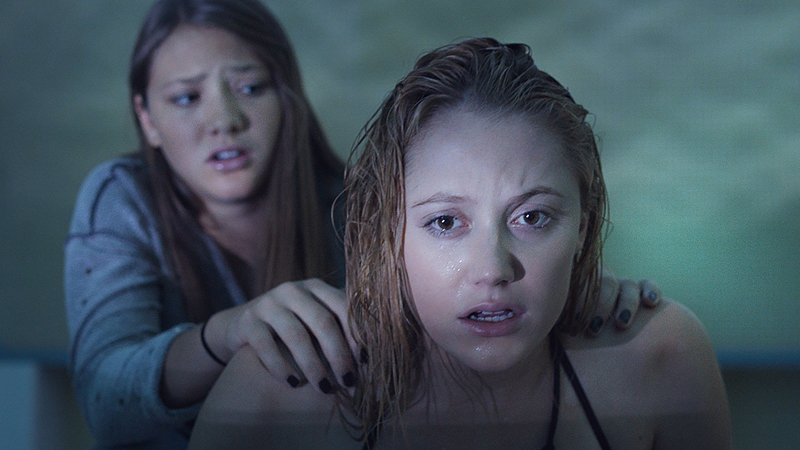 It Follows is not without a few problems; mainly the way it sometimes contradicts its own internal logic for scares that are admittedly effective in the moment. I’m not talking about the frequent, nitpick-y question of why Jay doesn’t just go to Guam or something; that’s taking the movie much too literally, and anyway, who’s to say that the thing can’t get on a plane? It did bug me, though, that after having Hugh explain that the entity will take on forms that’ll trick Jay into getting closer to it, it often does the exact opposite of that. I get how looking like an anonymous old lady or a friend or relative of its victims is a good strategy for the thing, but has taking the form of a naked dude and standing on a house ever worked for it? I can forgive the movie that, though, because I was jolted enough by those moments that I only questioned their logic afterwards. Even if a few parts would have benefited from a little more careful thought about the exact nature of the entity, on the whole it works brilliantly, and with an admirable sense of ambiguity. I was creeped out by It Follows while watching it, but later that night, sitting at home and thinking about the implications of the movie—particularly the perfect last shot—I found myself feeling deeply freaked out. Mitchell has said that his next movie won’t be horror, but I hope he returns to the genre eventually; there are so few contemporary horrors that are even competently made that it’s hugely refreshing to see one crafted with this level of skill and thoughtfulness.

Written By
Andrew Bemis
More from Andrew Bemis
I intended to begin this review by commenting on how infrequently Jonathan...
Read More