After a sophomore slump that flailed around trying to keep the magic alive, the third season of Stranger Things gets everything back on track. It’s better paced, more entertaining, the subplots are handled better, there’s a clear narrative arc, it’s appreciably nasty at times, and almost everyone gets worthwhile things to do. But more than anything, with season 2 feeling like an awkward addendum, this year it feels like the writers have something to say about growing up and leaving the past behind. No matter how ironic the sentiment is, considering Stranger Things is entirely built on nostalgia for a fantasy-tinged 1980s that only exists in the minds of middle-aged geeks.

It’s summer, 1985. Hawkins, Indiana, has a new Starcourt Mall that’s destroying the local economy, but the kids don’t care because Burger King’s within walking distance of a Waldenbooks. The Starcourt is a terrific focal point for this season, inevitably getting a lot of use due to the effort that went into recreating it so accurately. The production team took over a part of Georgia’s Gwinnett Place Mall, which opened in 1984, restoring one wing to its former neon-soaked glory. 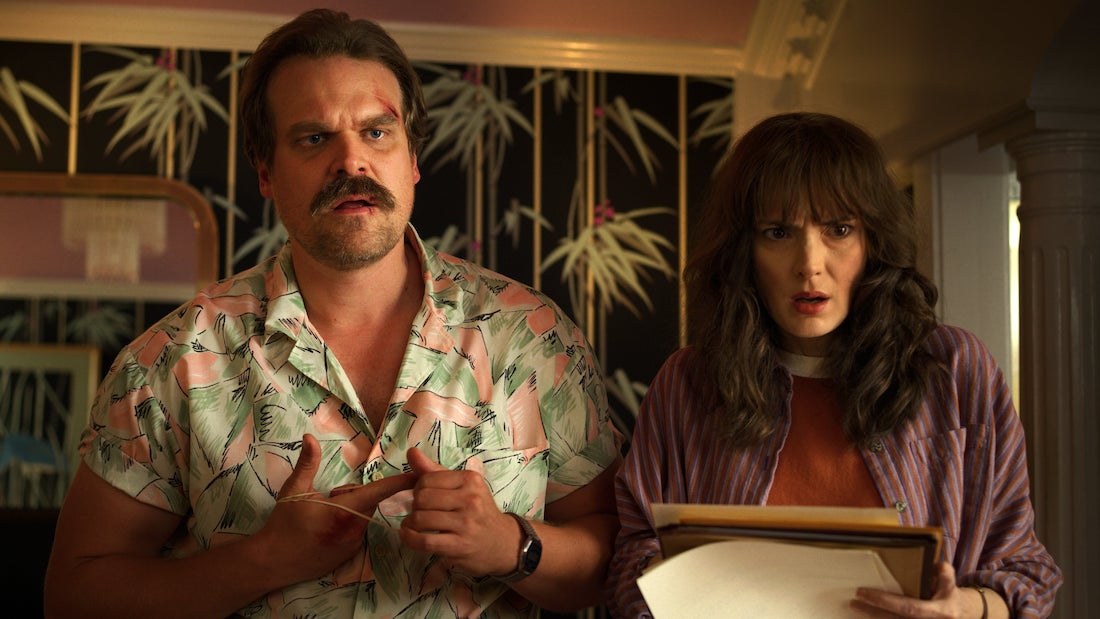 Beyond this notable backdrop, a number of things have changed with the main characters in-between seasons. The show’s creators, The Duffer Brothers, have to contend with the fact their youngest actors are now 15–17 and the older ones in their mid-20s. This means a number of things are done to shake new life into the series, but mostly it’s seeing the kids take an interest in the opposite sex and start hanging out at the mall instead of playing Dungeons & Dragons. The latter is a particular annoyance for Will Byers (Noah Schnapp), the youngest character, who gets a brief but emotive arc about the frustration of seeing friends grow up before you. The pain of watching people move on from a past you’d prefer to cling onto. We’re all “Will Byers” nostalgists, really.

Other changes include: Mike (Finn Wolfhard) and Eleven (Millie Bobby Brown) are boyfriend and girlfriend, spending too much time with each other kissing behind closed doors, much to Elle’s overprotective Sheriff Hopper’s (David Harbour) fatherly concern; Joyce (Winona Ryder) is considering moving away from Hawkins after the death of her boyfriend Bob, unaware Hopper’s interested in dating her; Dustin (Gaten Matarazzo) returns from summer camp with a CB radio (“Cerebro”) he uses to keep in touch with an alleged new girlfriend; Nancy (Natalia Dyer) gets a job at the local newspaper, but her ambition to be a reporter is curtailed by workplace misogyny; Steve (Joe Keery) starts a summer job at a novelty ice cream parlour with a sassy colleague called Robin (Maya Hawke); and Billy Hargrove (Dacre Montgomery) is giving bored housewives palpitations at the public pool where he’s a lifeguard, but an illicit date doesn’t go to plan after he becomes the first victim of a creature hiding inside a steel mill… 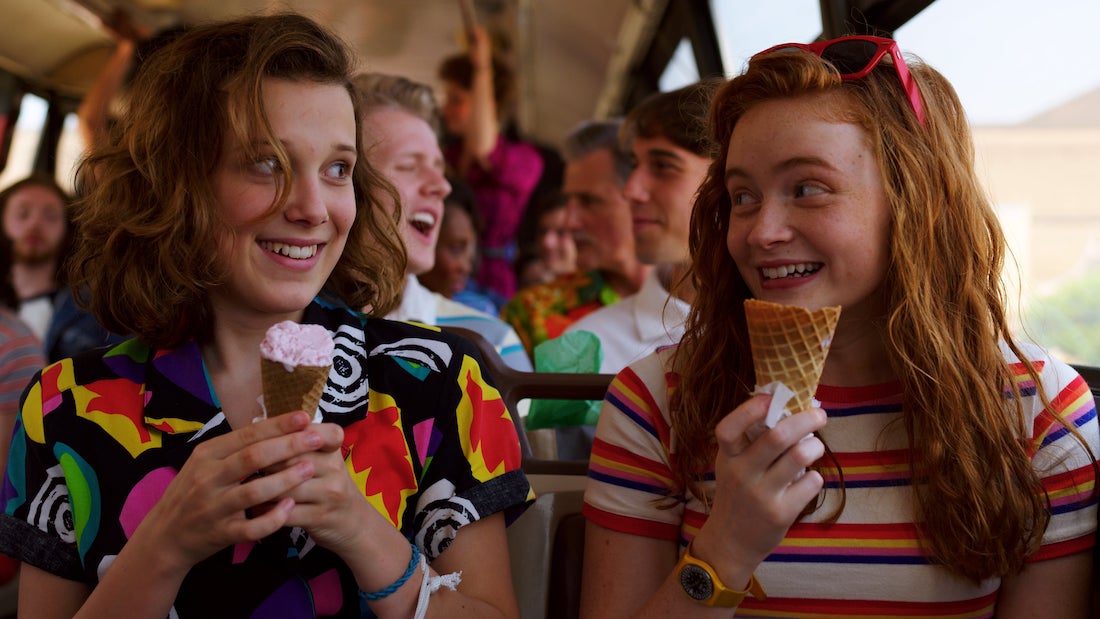 The strength and weakness of Stranger Things is its desire to be a heightened version of ’80s entertainment, with modern production values. There continues to be almost nothing about the show that isn’t inspired by a movie, or paying homage to a filmmaker, or referencing an indelible moment of cinema. Admittedly, the show doesn’t try to hide how much it steals from other people. It’s clearly in love with its rose-tinted evocation of the decade, appealing directly to people who in their thirties and forties, who likely now have kids they want to impress with a hybrid vision of what the ’80s were like and how exciting genre films were at the time. For adults who’ve tried to get an 8-year-old interested in classics lacking the budget kids are accustomed to, Stranger Things works as a happy medium. It’s a warm bath of nostalgia and a mix of references older geeks can pick out, but still has an entertaining group of characters kids today can embrace. The 1980s setting probably feels very “alien” to 21st-century teenagers (no internet or mobile phones?!), but that alone makes it a fantastical playground for younger minds. The show’s amped ’80s aesthetic is almost a window to another dimension, full of outmoded tech and colourful clothing.

But there are times when one stops to consider what’s unique to Stranger Things itself, and the answer is… not much, frankly. I don’t think there’s a single character, relationship, storyline, villain, monster, or set-piece that doesn’t seem inspired by something that came before. You just have to make your peace with the show being a grabbag of decades-old ideas. This year, there’s less about the ‘Upside-Down’, as the Lovecraftian ‘Mind Flayer’ has now entered our dimension and is building an offal body from flesh - starting with thousands of rats, before possessing Billy and using him to collect other townsfolk to increase its size and strength. It’s Invasion of the Bodysnatchers (1976) but with extreme body-horror that John Carpenter would approve of, with people either under mind-control (“the Flayed”) or subsumed into the creature’s body (as “the Melted”). Added to this, the season leans into Cold War anxieties with a subplot about Russkis engaged in a bizarre experiment that has something to do with the new mall. 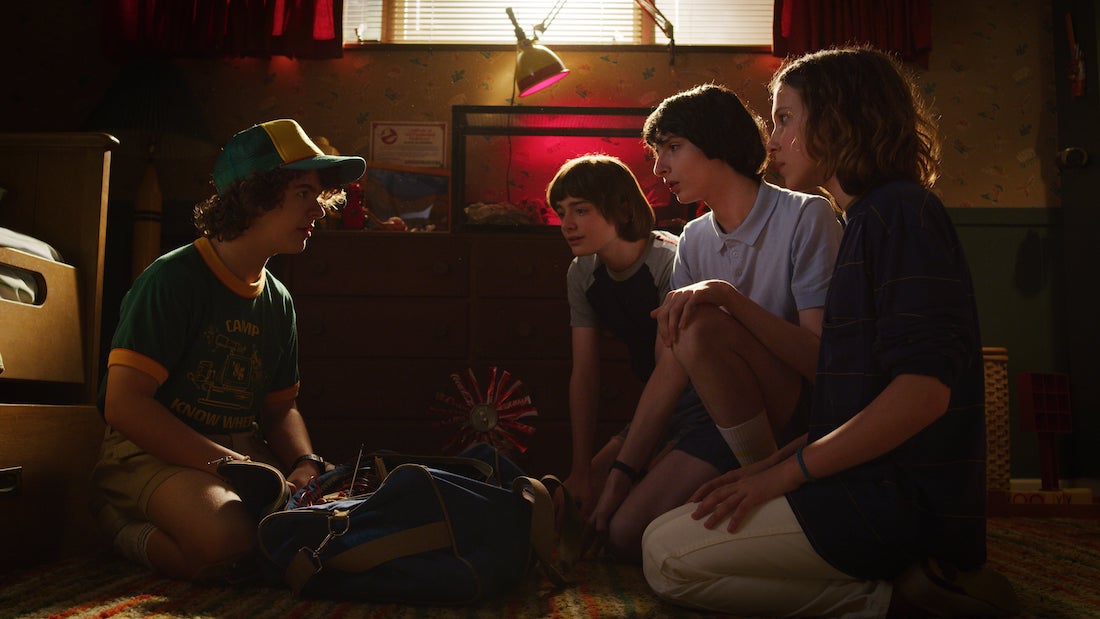 One thing the third season does a better job of is handling so many characters. They’re wisely separated into sub-groups and are kept apart for long periods in the middle, before converging at the end, and none of the individual storylines is weak. Steve, Robin and Dustin do reconnaissance of a “Red Scare” at the new mall; some of their investigations prompt Hopper and Joyce to kidnap Soviet scientist Alexei (Alec Utgoff) and interrogate him with the help of bilingual sleuth Murray Bauman (Brett Gelman); Nancy and her boyfriend Jonathan (Charlie Heaton) investigate the mind-controlled townsfolk, leading them to become suspicious of Billy’s behaviour; and the core gang of Mike, Eleven, Will, Lucas (Caleb McLaughlin), and Max (Sadie Sink) tackle the main problem of the Mind Slayer having appeared in Hawkins for a hostile takeover.

Stranger Things has only ever done 8 or 9 episodes each season, instead of the more typical 13 for Netflix shows, so that helps its storylines become easily digestible. Some episodes are longer than others and, in truth, this season could probably have told its story in six, but it feels like a summer blockbuster chopped up into bite-sized instalments. Things hum along very pleasantly, often ending on good cliffhangers that tempt you into watching another. 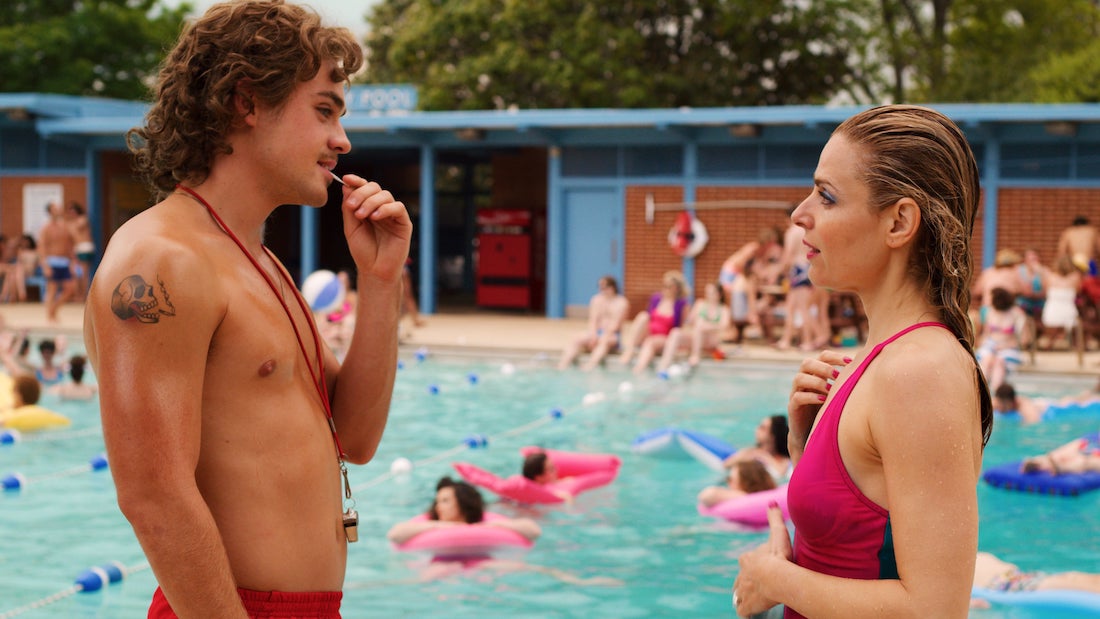 There are only really a few things that knock the season down in my estimation. One of those is the disappointing way Hopper was reconceived in an attempt to develop him that backfires horribly. David Harbour is great in this part and gets some fun macho moments, but early on he’s stuck trying to make Hopper likeable as he tries to end Mike and Eleven’s relationship (for no discernible reason, other than panicking over them having sex), and then he starts behaving like an entitled asshole while trying to woo Joyce. It’s not a good look when one of the show’s two principal adults is exhibiting signs of toxic masculinity, and the ’80s milieu doesn’t make it excusable. Thankfully, things become more enjoyable in the middle when Hopper essentially becomes the star of his a Magnum, P.I-style adventure (even wearing a loud shirt Tom Selleck would’ve owned), and gets to brawl with a cross between The Terminator and Ivan Drago called Grigori (Andrey Ivchenko). It’s just a pity Hopper’s character arc is so shaky and ugly at times, considering how we’re supposed to feel by the end. Harbour just about manages to make it fly.

The other downside is that, when you stop to think about it, this season is just another story about the same kids defending the same town from the same monster. There are differences in how the battle is being played out, but it seems like any big changes are being pushed back for the fourth season. We just get new elements of the monster lore, some development with Eleven’s psionic powers, and other stuff that’s just adding details. The theme of the kids growing up is by far the strongest asset, but even that fades away after four episodes, and there isn’t as much new blood this year. Robin is the best new addition—played by Maya Hawke, daughter of Uma Thurman and Ethan Hawke, which means her father was the child star of Joe Dante’s Explorers (1985). She’s cool and smart, with a neat twist to her character’s identity towards that I liked. Less successful is Erica Sinclair (Priah Ferguson), Lucas’s annoying little sister, who gets an expanded role to further grate on your nerves. She’s the archetype of the annoying kid with a no-nonsense attitude beyond her years. Ferguson plays the role perfectly, but characters like Erica aren’t to my taste and it felt cliched. 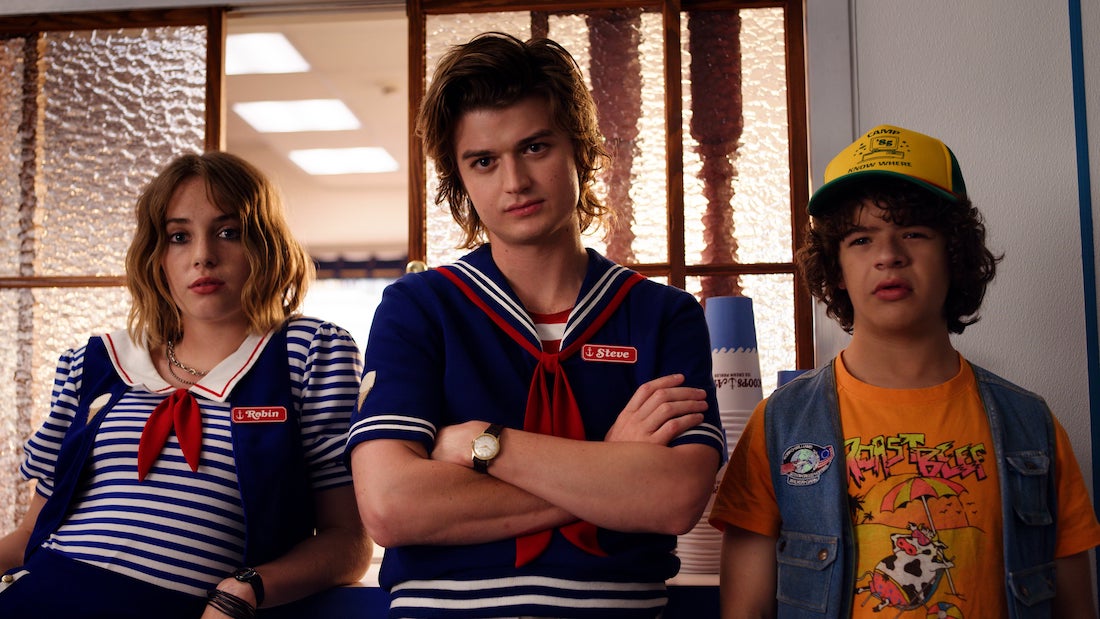 I presume the idea is to pave the way for the next generation of Hawkins kids, some of whom will be younger siblings of the originals, to sustain the show past season 4 or 5. That’s if Netflix wants the show to continue into the late-’80s and even the 1990s?

For now, though, Stranger Things is back to being as addicting as the first season, although its onslaught of references and unoriginality means it’s less than the sum of its parts. Even sequences that seem fresh aren’t in reality (like Hopper being stalked by Grigori through a Hall of Mirrors), as that scene’s lifted from The Guest (2014)—a modern thriller inspired by the ’80s synth-neon aesthetic. However, the performances are good, the VFX are excellent (the Mind Flayer attack in the mall is stunning), the story kept me interested, there’s some bite to the violence, and it’s never tedious. Just make peace with the fact it’s standing on the shoulders of giants and doesn’t have much fresh on its mind.