The strongest opening for a series of Doctor Who in a while continues with Toby Whithouse’s “Under the Lake”. Series 9 may not be benefiting from unfortunate scheduling against the Rugby World Cup, or from Strictly Come Dancing’s lead-in, but so far the decision to run with two-part stories is at least paying off in terms of storytelling and character-building. While the premiere’s reunion with Davros determinedly embraced Who continuity, “Under the Lake” sheds such affiliations and instead embraces a classic series format.

The oft-used ‘base under siege’ trope (established when Patrick Troughton was running away from monsters at BBC Television Centre in the 1960s, and very much a staple of Who ever since), is front-and-centre this week. Underwater complexes, of both physical setting and psychological horror, were also a strong feature of “The Underwater Menace”, “Fury from the Deep”, “The Sea Devils”, “Terror of the Zygons”, “The Horror of Fang Rock”, “Warriors of the Deep”, “The Curse of Fenric” and “Cold Blood”. 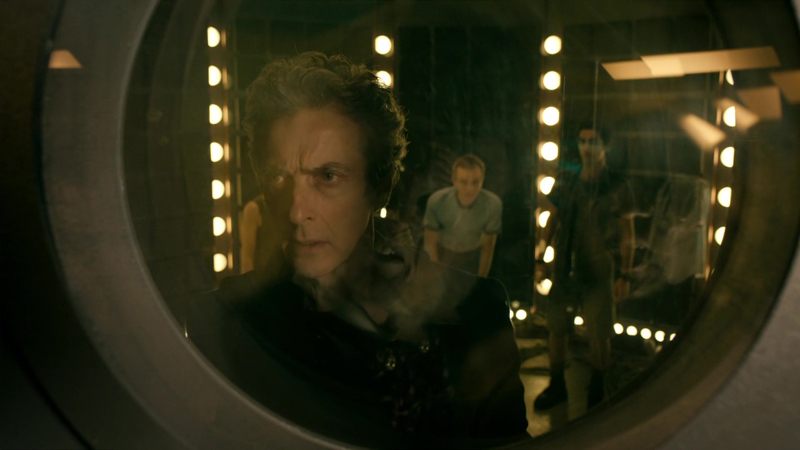 Whithouse’s story is therefore in good company, and the Being Human writer turns the familiar ‘base under siege’ concept to his advantage; creating an atmospheric, oppressive, intriguing ghost story. Perhaps there’s even a subtle homage to “Fury from the Deep” writer Victor Pemberton in conglomerate Vector Petroleum, the name of the oil company that owns the story’s chilly undersea installation The Drum?

During the pre-titles sequence, the crew of underwater mining facility The Drum recovers and investigates an alien ship (a tip of the hat to Quatermass and the Pit). After discovering a set of strange runes inside its hull, their commander, Moran (Colin McFarlane), is killed when the ship’s engines suddenly fire. After the crew evacuate, Moran appears to them as a hollow-eyed ghostly apparition, accompanied by a top hat wearing ghoul called Prentis (Paul Kaye); one of Whithouse’s cowardly ‘mole’ aliens from the planet Tivoli, as featured in his Series 6 episode “The God Complex”. 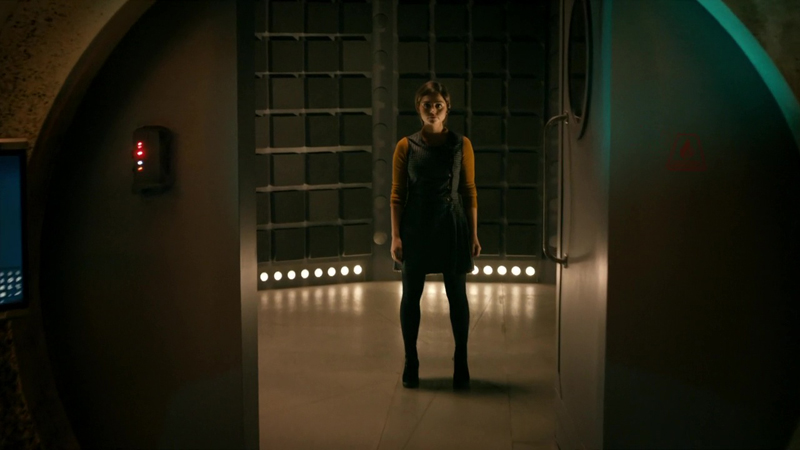 It’s fair to say they’re staple characters and the possession theme is similar to “The Impossible Planet”, but this is tried-and-trusted Doctor Who territory. The Drum’s crew are strong archetypes, while Cass’s ability to read the lips to translate the ghost’s whispering provides a key to the mystery of why a stasis pod recovered from the lakebed is signalling outer space. The signal is boosted by the creation of more ghosts but the pod remains a deadlocked mystery…

Michael Pickwoad’s stunning production design is evocative of the many spaceships and facilities featured in the Alien franchise, as well as films like The Abyss. There are also nods to Star Trek in the door signage (1701B) and, most prominently, a mural depicting a huge creature threatening a sailing ship crewed by sailors wearing gold, blue and red uniforms. In the tradition of ghostly literature this may also be a nod to Homer’s Odyssey, where the hero descends into the underworld to speak to the shades of his drowned crew.

The chase around the corridors of the The Drum, to try and capture one of the ghosts for a closer examination, is also redolent of the inmates of Fiorina ‘Fury’ 161 helping Ellen Ripley trap the alien via a series of closing doors in Alien3. This bolsters the episode’s mise-en-scène, beautifully shot by director Daniel O’Hara and director of photography Richard Stoddard. The lighting and colour palette enhances a world of shabby futurism, funded by the stingy corporatism of Vector Petroleum, that gradually closes down to become an increasingly claustrophobic Gothic space defined by malign technology (literally ghosts in the machine), and their supernatural origins in a flooded valley and submerged village. 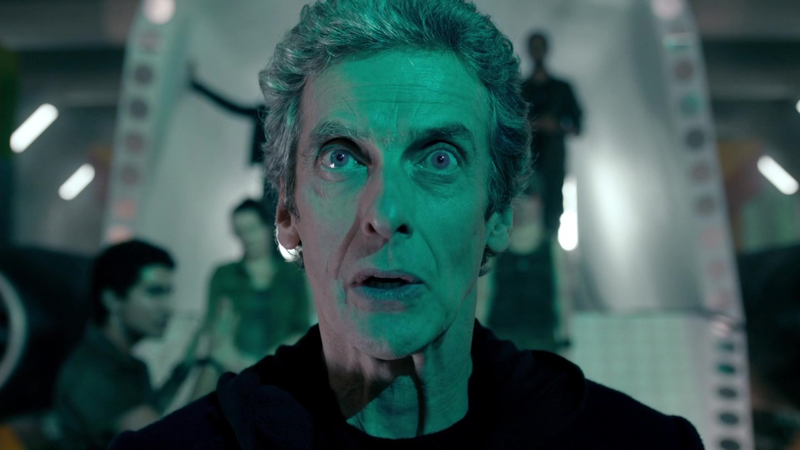 After capturing the ghosts and deducing their transmissions (the sonic sunglasses earning their keep this week), The Doctor’s search for the source of this malignancy takes him and the TARDIS back to 1980 “before the flood” caused by a bursting dam. This has intriguing religious connotations in the symbolism of the village’s biblical immersion (a baptism of evil, perhaps), and the location of the alien’s pod in a ruined church. I was reminded of French supernatural series The Returned, with its sunken town and revenant population, due back on Channel 4 this year.

It’s not all doom and gloom, thankfully. The relationship between The Doctor and Clara seems to have moved on. Clara is clearly a fixated time-traveller; her reckless enthusiasm for “monsters, things blowing up” causing some concern for The Doctor. This is reiterated in the later scene in the TARDIS when The Doctor and Clara investigate the doom-laden tolling of the TARDIS Cloister Bell. The ghosts are unnatural temporal aberrations and The Doctor’s ship is not happy about it. The Doctor mentions his “duty of care” towards Clara and feels she is plunging headlong into adventures in a bid to match his own insatiable curiosity. Perhaps it’s the first warning sign that eventually Clara might get more than she bargained for?

Thrown into the mix are witty asides about peanut allergies and Shirley Bassey, and The Doctor’s rhapsodic excitement about ghosts created by people being “literally, actually dead”. The Doctor’s social etiquette in this situation requires the consultation of a series of cue cards (something that Clara’s instigated, to counter this enthusiasm with the proper respect for the crew’s fallen commander slash family member slash pet). There’s a lovely reminder in there of how he mistakenly abandoned Sarah Jane Smith in Aberdeen back in “The Hand of Fear”, too. 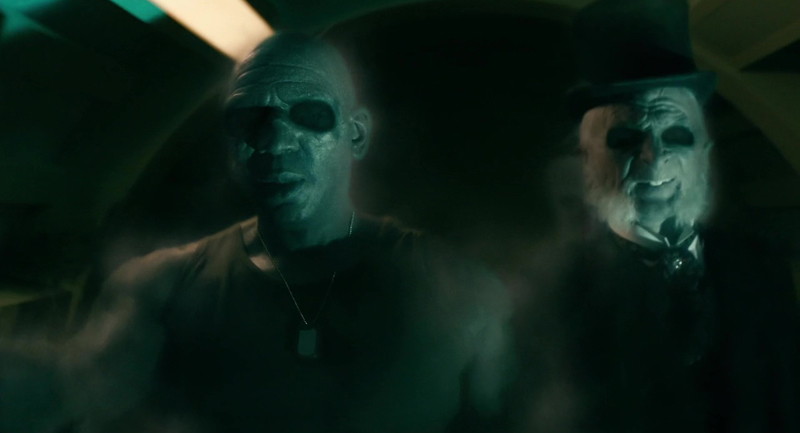 The Doctor rather jumps to conclusions about the nature and purpose of these ghosts. The alien pod and the aftermath of the flood are connected; and rather then being apparitions of the traditional kind, both frightening and consoling us about the afterlife, these messengers from beyond suggest they’re the action of a living mind on matter at a distance. Recovering the alien pod from the sunken church, he prepares to set off in the TARDIS and has already concluded of the ghosts: “they’re not a natural phenomenon. Someone is deliberately getting people killed, hijacking their souls and turning them into transmitters.”

The two-part story format is something of a blessing this series. Here, instead of a hasty forty-five minutes cramming everything in, the story and characters are allowed to breathe in the first part and tension is gradually and effectively built up until the cliffhanger leads into part two. It’s a good cliffhanger, too, with The Doctor separated from Clara in a scene that repeats the shot of David Tennant and Freema Agyeman in “42”, as The Doctor and Clara face each other across a flooding corridor and press their hands to the viewing ports. He leaves in the TARDIS, along with the hopes of Clara and the crew, only to return from the past as a hollow-eyed revenant; a victim of whatever alien force awaits them all in a chilling set up for “Before the Flood” next week.