If there’s one thing that Steven Moffat’s “Hell Bent” achieves, it’s certainly not clarity. Picking up from The Doctor’s (Peter Capaldi) arrival back on Gallifrey, Moffat sidesteps any intention to make this the major conclusion to the particular quest that began with “The Day of The Doctor.” He’s got home “the long way round”, and yet the achievement is marked by something akin to a shrug of the shoulders.

Instead, The Doctor rolls up at a certain diner in Jackson, Nevada. Eagle-eyed viewers will have noted the Jackson sign proclaiming ‘no matter where you go there you are’, an apt line from The Adventures of Buckaroo Banzai (1984) that suggests The Doctor has come full circle. Not only is this Moffat’s attempt to join the ends of narrative loops but, with his guitar and shades, The Doctor is again cut as a rock star figure that fetishes the central character as a global brand. 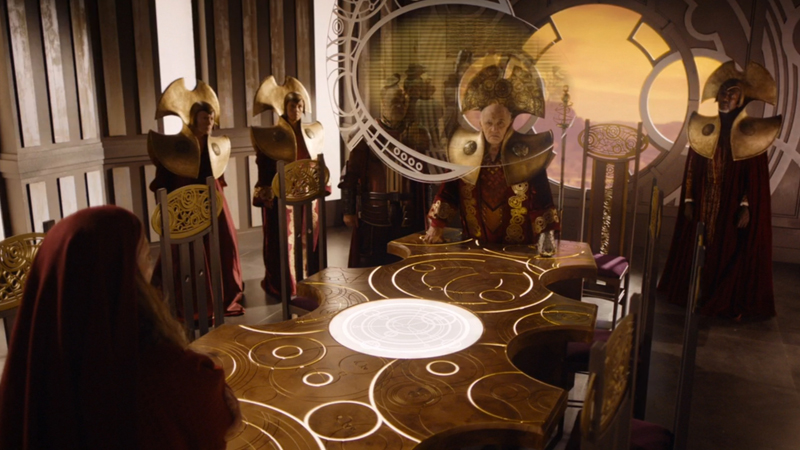 Clara’s (Jenna Coleman) appearance is anti-climactic. On one hand, a Doctor Who Magazine front cover completely gave away her return several weeks ago, but on the other Moffat can’t bear to kill his main characters off. They all carry on, in some form or another. Her appearance signals unfinished business from “Face the Raven” and in a typical move, this is not an episode about The Doctor’s return to Gallifrey but about his willingness to slog away for billions of years to save Clara from her untimely death.

We are fooled into thinking these scenes in the diner are more of the ‘mind palace’ malarkey from “Heaven Sent”, but if you watch closely there’s a deeper mystery as The Doctor clearly does not remember Clara. All he can rely on is the playing of ‘The Impossible Girl (Clara’s Theme)’ on his guitar, as another example of source-connected music in the series that overlaps the inside (fictional) and outside (production) worlds of Doctor Who. While it may pull a few hearts-strings, this is also saying Doctor Who is a product, a self-referential commodity. 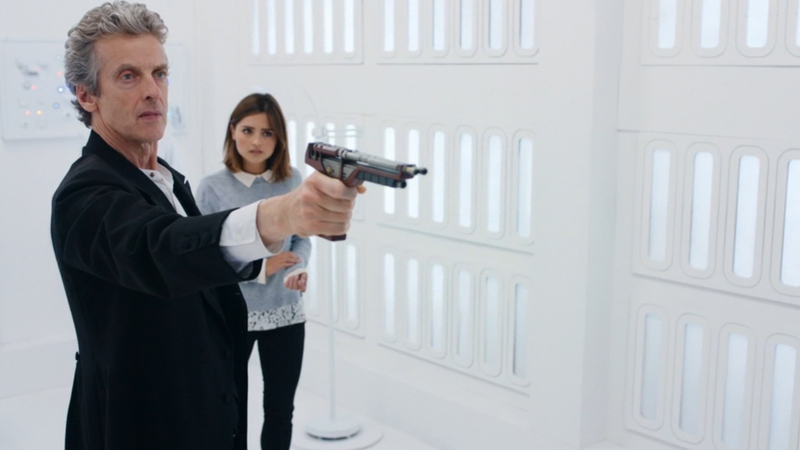 The Cloister bells are ringing on Gallifrey and Donald Sumpter’s President is not having a good day. There’s a nice touch in the visual effects shot as the virtual camera races towards the city and its tracking is slightly interrupted as it passes through the transparent dome. The Cloister Wraiths guarding the Matrix, the ‘sliders’ gliding about in the depths of the Time Lords’ basement subconscious, are getting in a tizzy now The Doctor’s arrived. However, like all good ideas, such as the monsters imprisoned in the Cloisters, they are window dressing for a plot development—The Doctor’s return to Gallifrey, that’s usurped in favour of revisiting Clara’s death.

Ohila (Clare Higgins) and her Sisterhood of Karn suggest The Doctor’s gone “back to the beginning” and in more ways than one: in an encounter with a Clara he no longer knows, and a return to the Dry Lands barn of his childhood, last seen in “Listen” and “The Day of The Doctor”. Moffat often resorts to making some sport out of baiting fans and “Hell Bent” probably holds the record for the number of times he does this. Hence, in the barn when The Doctor encounters the old woman (Linda Broughton) there’s a hint she may be his mother. Broughton is credited as The Woman, the same credit generating similar speculation about Claire Bloom’s role in “The End of Time”. 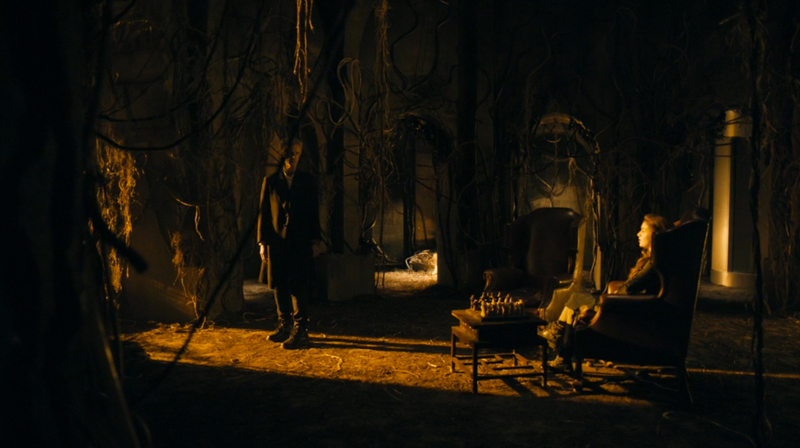 The Doctor forces the President to come to him because, after all, as the General (Ken Bones) notes, “words are his weapons. When did they stop being ours.” It also indicates that the nature of the Time Lords has significantly changed in the aftermath of the Last Great Time War. There’s also a very interesting shot in the barn during this dispute, where The Doctor is reflected in a broken mirror as he puts his jacket on. It serves as a visual allusion to the fracturing of time that The Doctor is willing to cause by rescuing Clara and is a call back to the first sight of himself in “Deep Breath”.

The Doctor blames President Rassilon for the Time War and is more than happy to depose him and banish the High Council for his torture and imprisonment inside the confessional dial. His confrontation with Rassilon in the Dry Lands is beautifully staged by director Rachel Talalay, especially in those big, panoramic shots of their tiny figures in the rust coloured landscape. It’s an interesting study in power, a riff on the corruption of armchair generals shown in Paths of Glory (1957), and the enduring myth of The Doctor as war veteran, as powerful a figure as the lone fighter defending homesteads in the classic western Shane (1953). 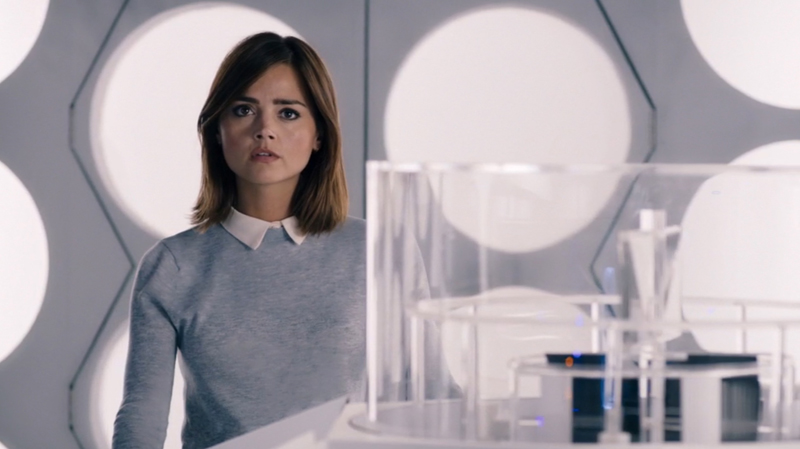 “Hell Bent” is a meditation on stories and storytelling, replaying Moffat’s theme of their power to shape memories, their intrinsic relationship with remembering and forgetting. As The Doctor says, “stories are where memories go when they’re forgotten.” Keep your ‘Moffat Bingo Card’ handy as there are more tropes to come, including old standbys such as time paradoxes, the male to female, white to black regeneration of a Time Lord, memory wipes, the speculation on The Doctor’s reason for running away, and his half-human nature.

Once he’s sent the President and the High Council packing, The Doctor’s told Gallifrey has been positioned at the end of time and at the end of the universe “for its own protection.” However, his conversation with Ohila in the Cloisters serves as the fork in the narrative, pulling the episode back towards the identity of the Hybrid. “At the end of everything, one must expect the company of immortals,” suggests the High Priestess of Karn, foreshadowing the reappearance of Ashildr/Me (Maisie Williams) as a possible manifestation of the Hybrid and about which The Doctor seeks facts not myths and legends. 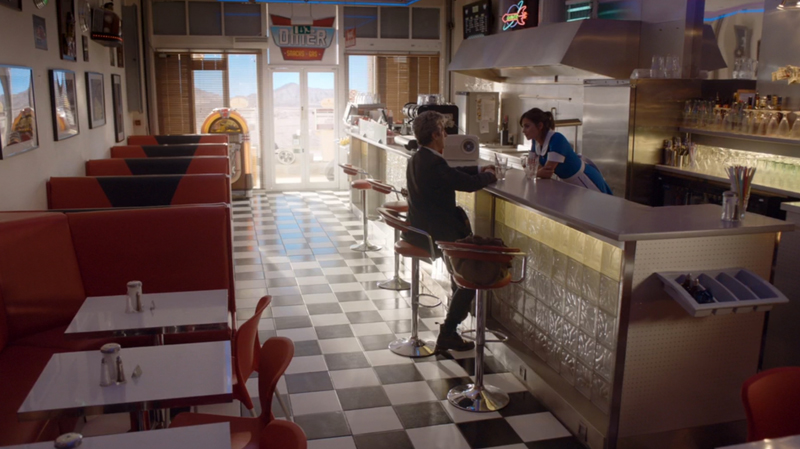 At this point the episode moves from the burnt orange, widescreen vistas of location filming to fractious conversations in small rooms. It’s a trend remarked on before and here it seems a deliberate reversal of what a finale should be, forsaking the spectacular for lots of dialogue and character-driven set-pieces. The General and The Doctor ruminate about the Hybrid, what truths lie in a myth concocted of stories and prophecies about a creature standing in the ruins of a future Gallifrey. This scene also points to a serious issue the series is struggling with. How much of this mythology, of Doctor Who’s own backstory, should now be at the core of the storytelling and character development?

The Doctor extracts Clara from her own time stream moments before her death on a pretext to reveal more information about the Hybrid. She briefly lives on in a time loop, “frozen between one heartbeat and the next”, but her death is a fixed point in time and “cannot be altered” (mark your ‘Bingo Card’ now!) except when Moffat decides it can because The Doctor’s determined to save her in some impossible way. The final half of the episode is a chase around the Cloisters or chit-chat in the diner with The Doctor and Clara info dumping about how Gallifrey came back (answer: we don’t know), memory wiping neural blocks, monsters filed in the Matrix database, the nature of the Cloister Wraiths and a suggestion that his ‘granddaughter’ Susan might have been the President’s daughter. Frankly, I couldn’t care less because this is once again skewing significant work on character investment and making Clara nothing more than a cypher again.

If Clara represents the audience then her enquiry, “was I supposed to understand any of that?” probably means they’re asking the same thing of a continuity-heavy episode. Let’s not beat around the bush here, for all the defensiveness about viewing figures, the casual viewer is not being served. Who is this for? A lot of “Hell Bent” is burdened with mythology and continuity references, reverting Doctor Who to the very thing it set out not to be when it returned in 2005. Tucked away in all this gabble is a lovely moment, focusing on the real heart of the story, where Clara asks him what happened to him during his torture in the confession dial. The Doctor’s long struggle to get back to save Clara as his duty of care is another ‘Bingo Card’ moment as Moffat has repeatedly had the Eleventh Doctor endure through long periods of hardship to save his companions and/or the Universe. 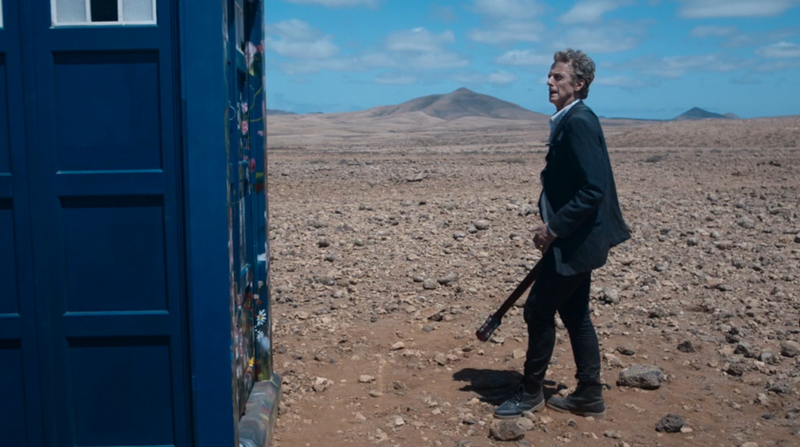 The Doctor steals a TARDIS (featuring a beautiful recreation of the original 1960s interior) and runs away as Ohila hectors him that he’s “broken every code you ever lived by” in the hope that he can make Clara live again. The Doctor becomes rather confrontational when, at the very end of the universe, it seems his hope is dashed that time will heal around Clara’s postponed death. He eventually confesses to Me, acknowledging how he did the same to Donna Noble, that he wants to take Clara back to Earth and “wipe her memory of every last detail of me.”

Moffat’s borrowing from Russell T. Davies even includes the ‘four knocks’ meme from “The End of Time” as the Doctor meets Ashildr/Me and is told, rather astutely, “you don’t like endings” and that immortals only run “because we know summer can’t last forever.” Their conversation about the Hybrid, conducted in golden-lit, cramped, semi-darkness, twists and turns on semantics. Is it Dalek and Time Lord, is it Ashildr and the Mire, is it the Doctor’s supposed Time Lord-human legacy? What it is, is a dull, interminable scene and, by the time we get to Me’s pet theory that the Hybrid is actually the Doctor and Clara, you’d be forgiven for not giving a damn. 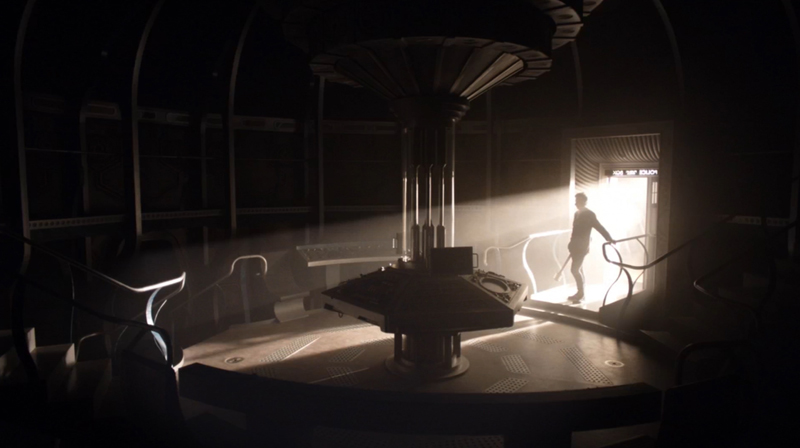 We’re back to the notion that The Doctor must bear to outlive his mortal companions, but Moffat is determined to cheat this again, allowing Clara to “insist upon my past” rather than face Donna Noble’s fate. However, his reluctance to kill companions completely, by providing them with an afterlife of some kind, here mutates into a lottery where The Doctor’s memory gets wiped and Ashildr and Clara—in their own TARDIS, stuck looking like an American diner—wander off into Space and Time for a spin-off in the making. I feel sorry for Clara, a proto-Doctor travelling in a TARDIS with perhaps one of the most unsympathetic characters we’ve had the misfortune to put up with.

As a finale “Hell Bent” is patchy and disappointing. This is a shame as the rest of the season has been consistent and often very good; Capaldi having totally secured himself as The Doctor. Neither the opening half on Gallifrey, nor the drawn out nonsense about the Hybrid and Clara, are entirely satisfying on their own terms. It flares briefly into life with some effective scenes but then often sinks into a morbidly paced set of dialogues in small spaces, as if apologising for its lack of scale. If “Hell Bent” suggests anything then it’s that Doctor Who should take a new path featuring the “never be cruel and never be cowardly” Doctor and his companion having adventures in space and time without all the self-flagellation.

Written By
Frank Collins
More from Frank Collins
“The Doldrums” and “Heaven and Earth” take the third season of Outlander...
Read More