There’s a very welcome injection of pace in “The Road Less Traveled”, the second episode of The Man in the High Castle’s second season. About time, too, as it welcomes in some character development for many of the lead and supporting players.

From the off, we find out how lawyer Kasura deals with the revelation that the goods Childan (Brennan Brown) sold him were fakes created by Frank (Rupert Evans) and, let’s just say, it doesn’t go down too well. Kasura promptly delivers them to the Yakuza, a depressingly damp cell, and certain death.

I really enjoy the Childan-Frank double-act, and it takes a seriously dark turn when Frank wakes with a start from a surreal nightmare where he finds a hole in the back of his head that he can push his finger into. Presumably a reminder of Frank seeing his own bullet to the head execution in one of the films collected by Abendsen, Childan’s riposte to him desperately checking his head is marvelous: “you’re about to die horribly, but your hair is fine.”

The Yakuza, quite happy to slit Frank’s throat, are persuaded by him that he and Childan are more valuable to them alive. He can make big bucks for them if they capitalise on his forgery skills. Frank, given some mettle by the showrunners this year, even manages to spare Childan and insist the Yakuza convince the Kempetai’s Inspector Kido to free his assistant Ed, currently on ice for the Crown Prince’s assassination, as he is vital to the creation of the forgeries.

That Ed (DJ Qualls) is freed by Kido (Joel de la Fuente) and reunited with Frank is a moment of emotional relief within a relentlessly darkening reality. But it also provides us with further development of Kido’s character, too, as until now, he’s been the black hat villain responsible for many barbaric acts in the series. Yes, he still tortures Ed before he’s leaned on by the Yakuza to pin the assassination on the conveniently dead Resistance leader Karen, but we do get a sense of his duty to his country and to his wife in the episode’s opening scene.

Joining General Onoda’s entourage for some late night entertainment, he spurns the advances of an escort. She makes a rather interesting comment about being in, and enjoying, the moment that reads as a loaded metaphor for the way characters slip between realities in The Man in the High Castle: “if your mind is always elsewhere, in a way you never are experiencing anything, right? Nothing’s ever real.” Perhaps Kido is rather more than he seems.

“The Road Less Traveled” still doesn’t quite know what to do with the character of Joe Blake (Luke Kleintank). Having taken leave of his Nazi paymasters and returned home to his girlfriend Rita (Jessie Fraser) and her son, he’s convinced by John Smith (Rufus Sewell) that Juliana is dead, so returns to work on the construction site he used to labour on. When reading the banned The Adventures of Huckleberry Finn to Rita’s son, he finds its story reflects on his own situation with some irony: “what’s the use you learning to do right when it’s troublesome to do right and ain’t no trouble to do wrong, and the wages is just the same?”

Joe, like the compliant truck driver Juliana meets, glimpses something about the nature of his own conformity with the Nazis, one that’s also rather wittily reflected in American Reich, this reality’s version of Dragnet playing on the TV in Rita’s apartment. Though there’s a sense of the writers not quite knowing what to do with his character, this perspective is welcome and it could open up fresh possibilities, especially when John informs Joe that his estranged father wants to see him in Berlin. 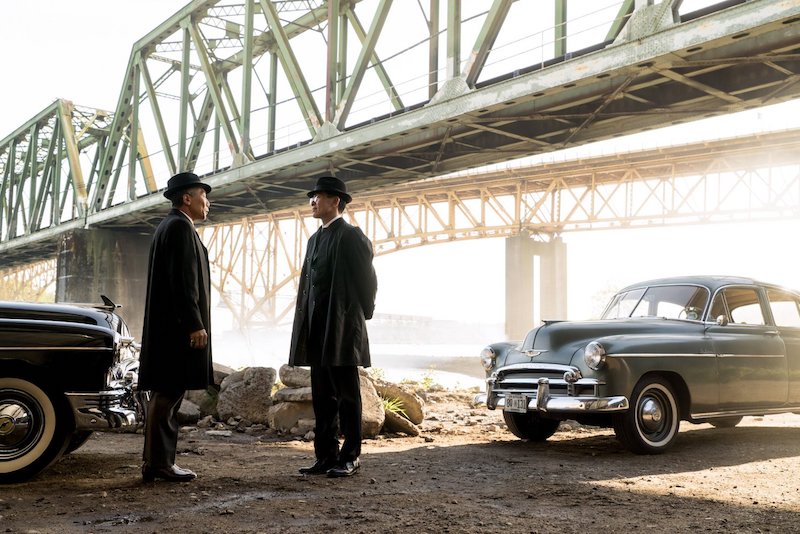 Tagomi (Cary-Hiroyuki Tagawa) learns that General Onoda is prepared to transport radioactive materials for the Heisenberg device on a public transport bus and put innocent people in danger. There is a hint that Tagomi will defy the military and try to prevent the device being built or from being used. Concerned about the alternate reality he has experienced, he asks his assistant to research certain cultural and historical touchstones from 1962–the Cuban Missile Crisis (October that year), Nelson Mandela (arrested in August), Lolita (Kubrick’s film version on release in September).

These never happened in his reality and, investigating further, he visits a university library to access certain suppressed texts. Among the selections, including Aldous Huxley’s Brave New World, Borges’ Other Inquisitions, the poems of Yeats and Blake, is William James’ The Varieties of Religious Experience, a collection of lectures given in Edinburgh and published in 1902. Tagomi seems taken with it. What’s notable is that it is as much about ‘opening the doors of perception’ as the other books in the drawer that Tagomi looks over. All were visionary writers who strove to see beyond the tangible universe and into other realities. James’ book explores the ecstatic religious experience and we can read into that a parallel with Tagomi’s Zen-like ability to meditate and cross into other worlds.

The theme of disavowed father figures is reinforced in this episode when Juliana (Alexa Davalos) returns home. A sympathetic truck driver takes her back to San Francisco. He throws the pursuing Resistance leaders Lem (Rick Worthy) and Connell (Callum Keith Rennie) off her track and she manages to reach her parents house. The truck driver’s tales of the defeat of the States by Germany and Japan underscores the horrors inflicted upon the psyche of those who still resist and those who “thought victory was winning.” However, as the driver confesses “Now I’ve convinced myself it’s surviving”, it intimates how, historically, the languages of complicity, conformity, collaboration, and consent eclipsed the opposition to fascism.

Clearly trying to give Juliana’s character some fresh impetus, “The Road Less Traveled” finally reveals the identity of the mysterious man who appears in her dream/flashbacks of a funeral and is potentially the man she has seen in Abendsen’s film who will prevent the nuclear destruction of the city. Her mother, asked about the man’s photo in the family album, reveals him to be George Dixon, a war veteran and, dramatic drum roll, her sister Trudy’s real father.

After warning her mother to get the family out of the city, Juliana is pursued by Lem and Connell and, failing to enlist Tagomi’s help to get out of the city, she hurtles to the Nazi embassy to seek asylum before the Kempeitai gun her down. Her letter to Frank, narrated over the scenes of Ed and Frank reunited and her crossing the border between the Japanese states and the Greater Reich, once again offers the notion that fate and reality can be changed only if we try.

“The Road Less Traveled” is a step forward. However, there is still a lot of work to be done on female characters in the show. Juliana lacks audience engagement and we may not see Joe’s girlfriend Rita again as she bids him goodbye in this episode. The show really needs a powerful female character to shake things up.

With former showrunner Frank Spotnitz’s work on the series carrying through to episode five, it’ll be interesting to see whether his departure at that point is demonstrated in an accelerated development of story and character. For now, the intriguing sub-plots are percolating nicely, characters are shifting from the rigid conformity of the first season and I would certainly put this episode’s pace down to veteran TV director Colin Bucksey, whose experience pays dividends here.