A man in his thirties travels to a remote cabin to reconnect with his estranged father.

There’s a distinct moment a third of the way through Come to Daddy—the moment those titular words are spoken aloud—in which the film reveals its true self. It’s a staple of horror films to feature a scene that either causes audience walk-outs or cheers. Yet it’s something we shouldn’t take for granted, as not every horror film has the boldness or craft to elicit such a reaction. Fewer still have the ability to surprise us.

If that scene does surprise or jolt audiences, it’s because it punctures so much of the mood the film has been building and replaces it with something more overtly monstrous. The film begins with thirtysomething Norval (Elijah Wood) trekking to his estranged father’s isolated beach house, after receiving a letter from him hoping for reconciliation. His dad (Stephen McHattie) is a bitter drunk whose only desire seems to be cutting his son down to size. Before long, their tense and distant stand-offs lead to dire consequences, paving the way for brutal shocks and revelations. 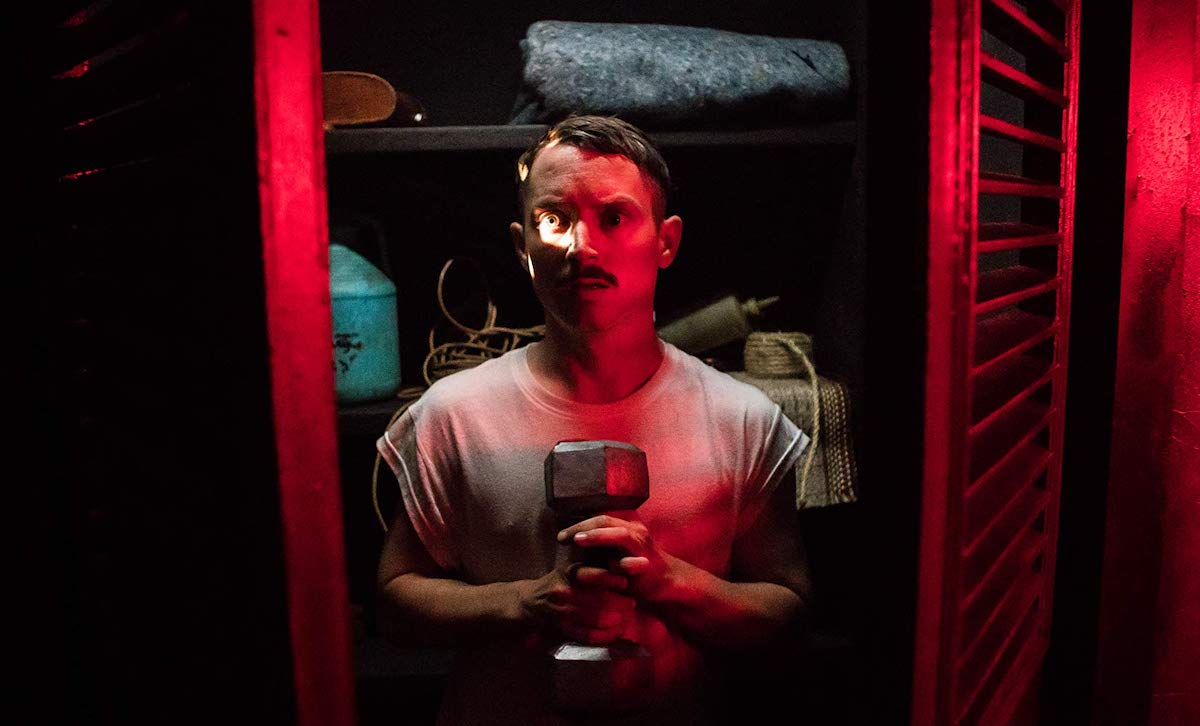 The first act of the film is a self-assured chamber piece that first-time director Ant Timpson delivers with play-like flourishes. The staging and blocking of the two men is brilliantly oppositional—at times facing each other as if in battle, while other times facing in the same direction, contemplating the expanse of an ocean and perhaps sharing a thought they’re not so different. Wood’s performance is striking for its vulnerability and unpredictability. His cartoonishly large eyes leave us wondering whether we’re seeing into Norval’s soul or being hypnotised by a fake.

One of the film’s best scenes is also its simplest. At the end of an uncomfortable first day together, Norval and his father, lit by a flickering fireplace, discuss Norval’s career as a music wunderkind. He tells his dad he knows Chance the Rapper and was discovered by Elton John. He sells it with the same bratty guess-what attitude of a child on the playground claiming to be related to the Royal family. The father keeps his cards close to his chest, before manipulating Norval into telling him the truth about these supposed celebrity pals.

It has the close tension and beautiful uncertainty of Marion Crane’s first interactions with Norman Bates in Psycho (1960), only here it’s not quite so clearcut which of them is the psycho. Instead, there’s a delicious sense that none of what we’re hearing can be trusted, as neither man is honest, and we’re left in the dark trying to fathom some element of truth. It’s a terrific scene and the film’s most important. It establishes a complex and well-drawn character dynamic, but in priming us with the knowledge that we cannot trust what we think we know, it also lays the groundwork for the film’s shifts in plotting and genre.

From claustrophobic psychological drama to haunted (beach) house horror, to Jeremy Saulnier-style revenge thriller, Come to Daddy is adept at changing path whenever the story calls for it. Patience benefits the film during some of the heavier expository moments, while bizarre instances of humour (police sheriffs burping on command, Michael Smiley using a ‘poo-pen’ as a weapon) suit the film’s tonal strangeness. Moments of violence (particularly one fight to the death involving clingfilm and toilet paper) are gruesomely effective and used sparingly, as desperate means to ends rather than motivating factors. 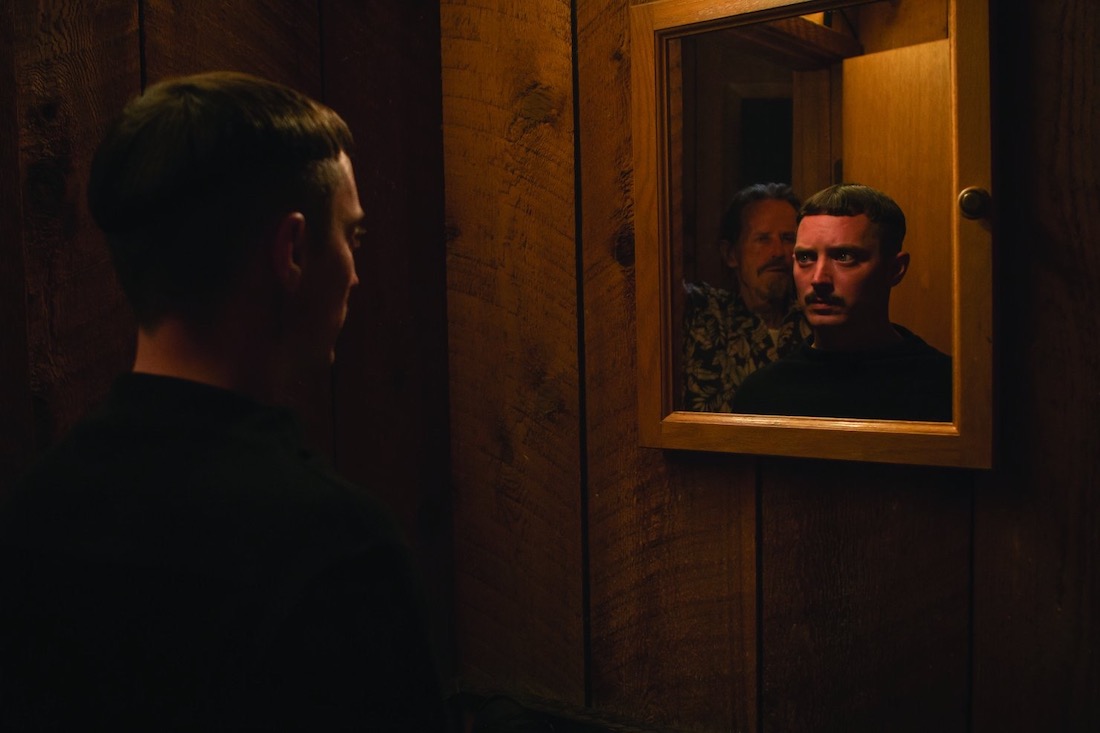 A third act’s move away from the beach house is where the film briefly loses its footing, particularly as the story’s established that home and the jagged rocks it grows from as the nucleus for its psychological terror. Likewise, some slightly convoluted plotting detracts from that central conceit—but the film’s careful not to lose sight of what it wants to say and ends with a genuinely moving interaction.

Come to Daddy works in each genre it plays with, twisting them to create a unique experience. Timpson is gleeful in the script’s rug-pulling nature, although it’s tempting to consider whether an even better film was always just out of his grasp. Is there a better version of the film that sticks with it being not-quite a ghost story? Or one that cuts back on some of the narrative ‘gotchas’? Possibly. But this is nonetheless an excitingly bold horror film. It’s a successful exercise in hybridity and an affecting look at the pain and desperation of trying to connect to a distant parent.

It also contains one of the most hilariously casual death scenes in recent horror cinema. Come to Daddy is one of a kind.

A year after the disappearance of an eight-year-old girl, her family return home from her memorial service and witness strange lights in the sky.

Of all of horror and sci-fi’s subgenres, few are as shopworn as the ‘alien encounter’. There’s always the chance of revitalisation, and it’s not fair to say that any subgenre is dead, but this particular subgenre is going through a creative down period. There are exceptions, of course: by focussing on communication and awe through an arthouse lens, Arrival (2016) felt genuinely alien. Annihilation (2018) was also invigorating and refreshingly terrifying. However, too often modern alien films fall back on tired iconography, hoping the ever-fading reflection of past images will be enough to engage and excite audiences. I can’t help but feel like aliens deserve better.

Dark Encounter is another alien abduction story that trades familiar cinematic images, believing that enough Steven Spielberg references will buy our love. The story is set in the 1980s, seemingly for no other reason than to conjure a sense of exploitable nostalgia. A year after a young girl goes missing, her distraught family find themselves thrown together in their isolated house in the woods, confronted by grief and mysterious lights in the sky.

Netflix’s Stranger Things, It (2017), and Super 8 (2011) have each covered the ’80s time period and the alien genre extensively. I’ve almost exhausted my tolerance for lazy nostalgia. Dark Encounter can’t help but feel late to the party, adding little to the conversation. Early scenes play out around dining tables and inside living rooms, where the family’s tense and unsettled dynamic is the focal point. Director Carl Strathie’s slow and patient camera is welcome during these moments, but less so later on when the film demands more urgent intensity. Unfortunately, this slow introduction is wasted on underwritten characters who struggle to justify the sluggish pacing.

Each member of the family is stiflingly vocal about how they feel and what they’re thinking, so there’s precious little there for us to decipher. Any internal tension or intrigue is quickly lanced by the film’s frustrating desire to have its characters describe a situation. “It doesn’t matter what’s going on between you and your wife, you should talk to your son. He’ll end up hating you,” proclaims Billy (Sid Phoenix) to his Uncle Ray (Mel Raido) as they drive out to investigate the unexplained lights. The issue is that the dialogue doesn’t ring true in the film—they don’t sound like a family talking, they’re characters explaining a dynamic. It becomes difficult to get a feel for who they are.

As the film progresses, it maintains a frustrating lack of chemistry and ease, as its plot falls into a painfully repetitive cycle that recycles not only its own story beats but those of better films. M Night Shyamalan’s Signs (2002) is perhaps the most blatantly aped. As the alien visitors close in on the house, the family gather together, anxiously listening to the sounds getting closer. “They’re in the basement,” says Billy. The scene is shockingly derivative of one from Signs, while a scene in which a flashlight-wielding Ray investigating a noise in his garden shed is an almost shot-for-shot remake of a scene from E.T: The Extra-Terrestrial (1982). Later, electronics play up and animals behave strangely whenever the little green men are near, and if this weren’t obvious enough, one of those objects is the cymbal-clapping toy monkey from Close Encounters of the Third Kind (1977).

Perhaps the film’s biggest sin is that it does nothing with its many references and allusions. It makes no point in its reusing them and doesn’t attempt to repurpose them. They’re just there… as if pointing to cultural touchstones is enough for audiences to feed on.

Eventually, Dark Encounter moves on from its feedback loop of characters reacting to strobe lights and starts to tell something of a story. Its third act development uses a concept taken directly from Interstellar (2014) to reveal a twist which, though unnecessary, is at least something containing a degree of emotion—largely thanks to Laura Fraser’s solid work as mourning mother Olivia. There’s a glimmer of potential in this third act reveal but, even if it were executed better, it wouldn’t be enough to validate the entire film.

Dark Encounter is a frustrating experience because you’re constantly straining to hear the film’s own voice amongst those it’s copying. Even more irksome is trying to hear what the film wants to say, which seems to be very little despite a heartfelt ending. The narrative stasis and repetition are unforgiving; it begins to feel like that aforementioned toy monkey crashing the same cymbals over and over again. If alien encounters truly are this uninteresting then lets hope they decide to keep to themselves in the future.