It’s going to be a hot, hot day. That’s about the only thing the residents of the Bed-Stuy neighbourhood of Brooklyn can agree on. Everything else is the source of bitter arguments. Bed-Stuy is a largely African-American area, but there are Italian-Americans, Koreans, Puerto Ricans, and the police, with fault lines running between them all. Meandering throughout is Mookie (Spike Lee), a delivery man for Sal’s Famous Pizzeria. As the mercury in New York inches higher, the tenuous peace across the community starts to evaporate.

Spike Lee must be cinema’s most prominent and effective interlocutor of racism. From the beginning of his film career to the present day, he’s produced works of scorching power that excoriate the skin of America to get at the racism underneath. That said, Do The Right Thing begins as a fun romp; perhaps not quite a comedy, but something with the loose and relaxed feel of jazz. 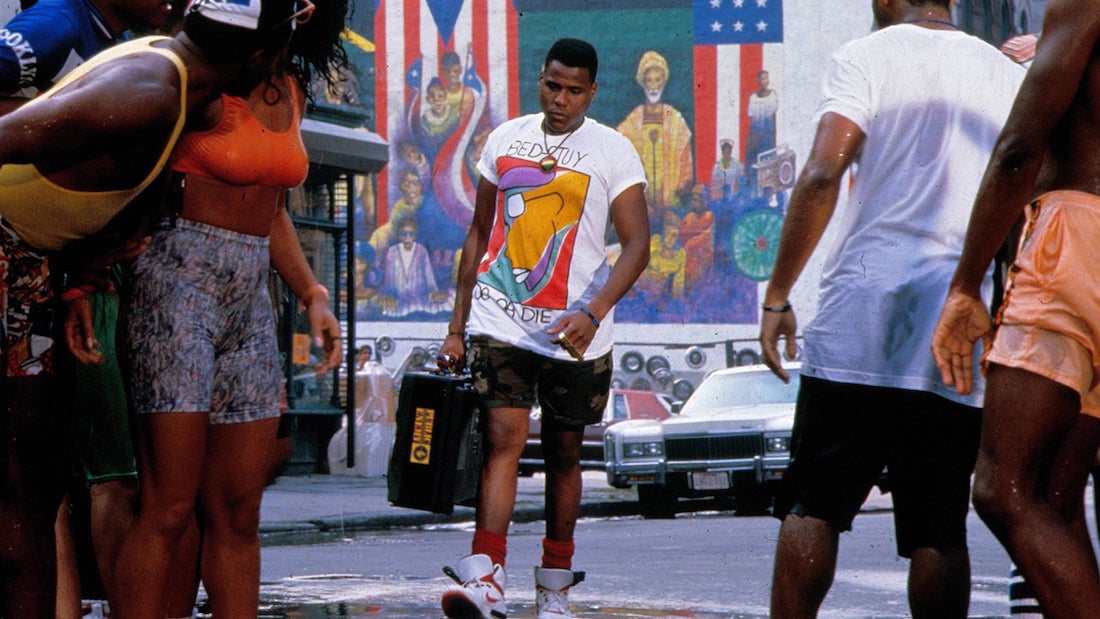 After the opening credits are played out to Public Enemy’s “Fight The Power” (a track written for the film at Lee’s request), we’re introduced to the Bed-Stuy neighbourhood through the smooth tones of radio DJ Mister Señor Love Daddy (Samuel L. Jackson). Then we meet Mookie and his sister, and on and on, discovering numerous characters played by recognisable faces such as Ossie Davis, Ruby Dee, Giancarlo Esposito, Bill Nunn, John Turturro, Rosie Perez, Martin Lawrence, and Frankie Faison. Lee does an incredible job of establishing each character as a unique person with their own personalities, quirks, and place within this community. So complete is the populace being presented, so multitudinous the conflicts, that it’s unclear along what fault line the place is finally going to crack. It’s a further testament to Lee’s skill at writing and directing that the eventual climax feels both shocking and inevitable. 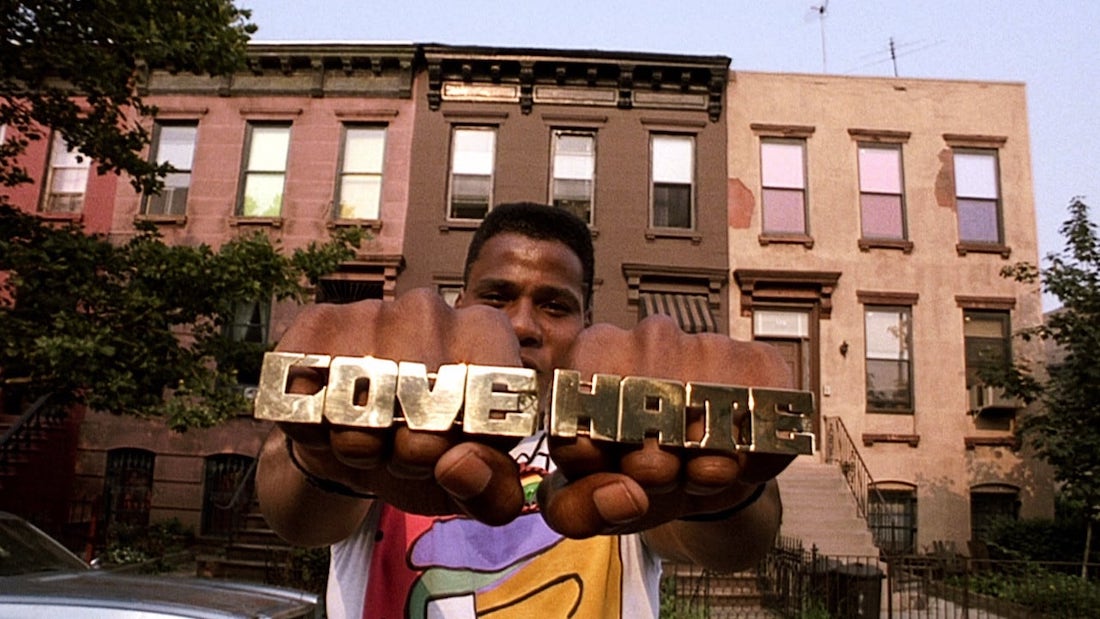 Although Mookie’s present in almost every scene, and Lee equips himself well in this role, he wisely puts the focus of scenes on brilliant character actors like Davis and Turturro. Both shine in their parts—Davis as a friendly drunk, Turturro as a young racist bubbling with anger—revealing new layers as the story progresses, until you understand the tragedy of their characters. But it is perhaps Danny Aiello who just pips them, giving the most affecting performance of the film, playing one of the most nuanced characters. However, it’s no exaggeration to say that every performance in this film is note-perfect, with the unfortunate exception of Martin Lawrence, who took an Adam Sandler-like decision to play his part with a silly voice. 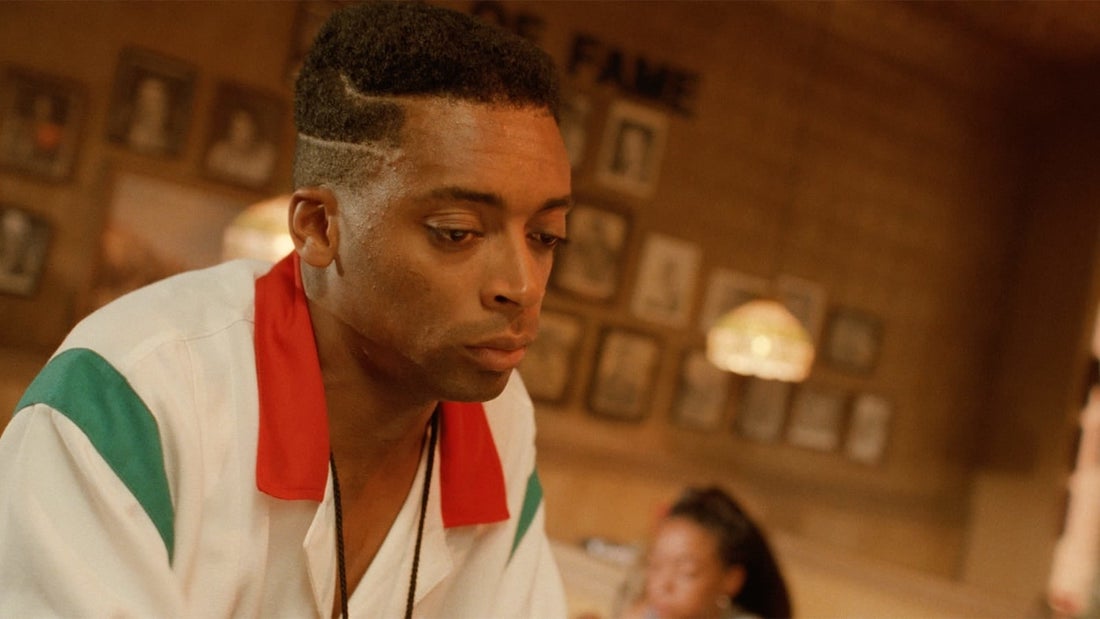 It’s not just the writing and the acting that’s sublime. Ernest Dickerson’s vibrant but never lurid cinematography is undoubtedly some of the most brilliant ever committed to celluloid. It’s almost too beautiful for words when presented in this flawless high-definition scan by Criterion. It’s in a work such as this one you can really see the extra effort they go to as a company. If only all films could have the Criterion Collection treatment.

Lee’s movies always have the almost intangible electricity of experimentation, whether it’s in the framing, the lighting, the writing, the performances, or the editing. There’s always something fresh in every scene. Seeing Lee on screen throughout the film reminds us constantly how young he was in 1989, and makes this monumental success only more amazing. Do The Right Thing is about the tragedy of violence, but itself is a celebration of the cinematic arts.

If the film has a flaw it’s that it could lose 20-minutes without sacrificing much, and that would help the pacing. Losing the last five minutes might also mean the ending packed a bigger punch, but it would appear that Lee was aiming for something mellow and ruminative. Do the Right Thing lives in your mind for long after the credits, and for something so loose to be so rich in substance is a rarity. In the end, it’s the equivocation about its central message that may frustrate some viewers, but Lee has never been interested in providing answers, only in getting you to think about the question. Let’s hope he continues to do so for decades to come. 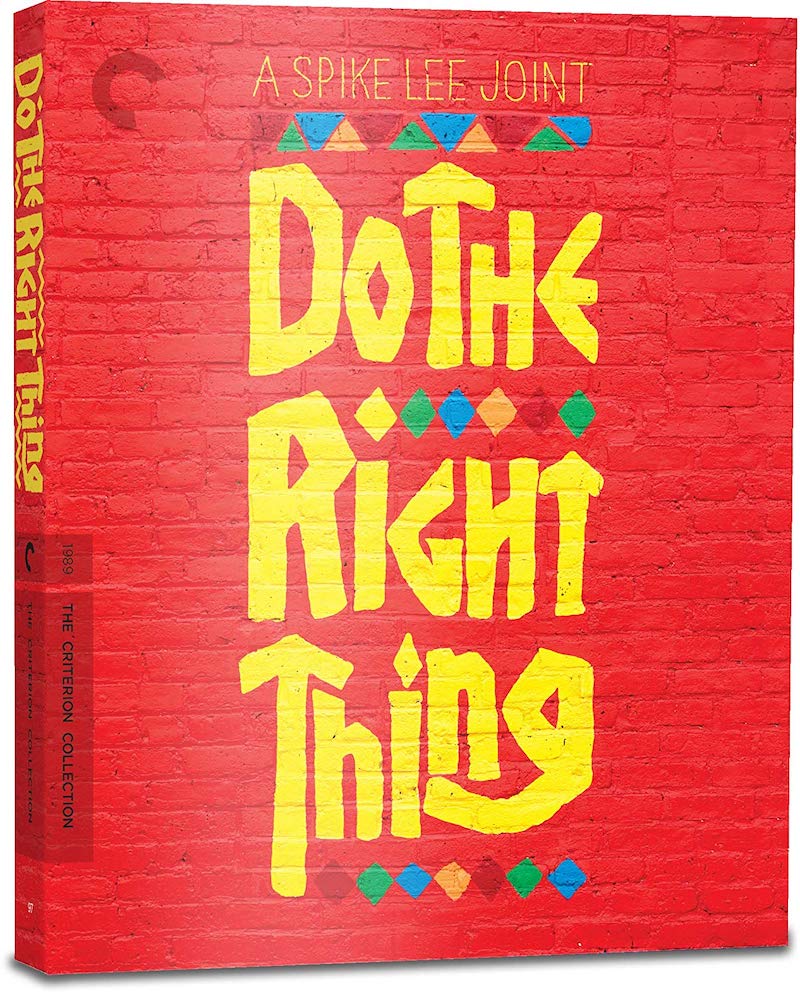