When we talk about Denis Villeneuve, let’s not forget the man who’ll direct the Blade Runner sequel was completely unknown just six years ago. His breakthrough, Incendies (2010), received a nomination for the Best Foreign Language Film Academy Award, before he surged to international acclaim with the absorbing Hugh Jackman/Jake Gyllenhaal thriller Prisoners (2013). Enemy, again starring Gyllenhaal, opened the same year, before Villeneuve shot one of the best films of 2015, Sicario. How can you top making one of the best films of last year? By making the best film of this year, most likely. Villeneuve’s latest, Arrival, is playing at the London Film Festival now, before opening nationwide across the UK on 11 November.

Arrival is full of mystery and drama, but mostly it’s great science fiction at its purest. When extra-terrestrial ships arrive on Earth, hovering at various spots around our planet, linguist Louise Banks (Amy Adams, terrific) is recruited by the military and asked to help establish contact with our alien arrivals, as chaos unfolds on the streets. All over the world, governments are collaborating to share information and coordinate a response to the aliens’ presence; politics and the growing tensions make the situation particularly unstable, with countries like Russia and China considering a more aggressive response. Joining the US team, led by Colonel Weber (Forest Whitaker), is also mathematician Ian Donnelly (Jeremy Renner), who works closely with Louise to decipher the aliens’ language and figure out why they’re here. 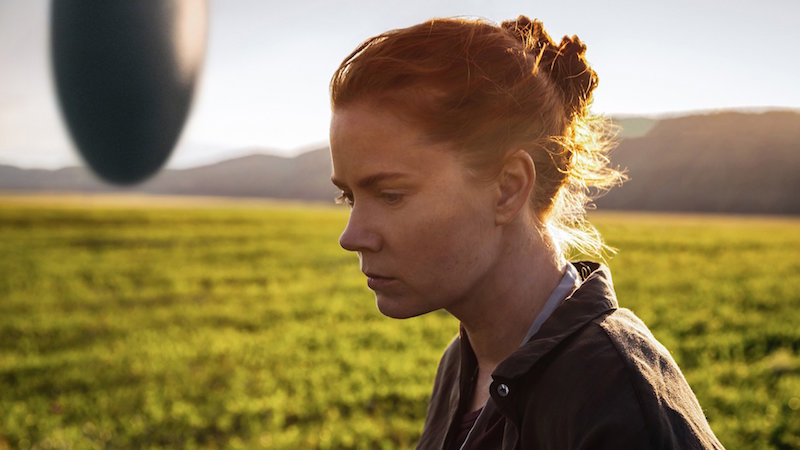 On one hand, Arrival makes full, smart use of successful tropes from countless sci-fi hits, from Alien and Contact, to Interstellar and Close Encounters of the Third Kind. On the other hand, it looks so fresh, so bold, and crammed full of substance and significance. It’s intelligent without trying too hard, cerebral without pretention, and it grows evenly but slowly without ever feeling dull. The film’s key word is “meaning”; as a professional linguist, Louise understands the huge obstacles in communicating with a different form of life. She explains how the question “what is your purpose on Earth?” cannot be simply translated. It must come with a full understanding of the basic concepts of our language, our way of creating meaning. First of all, it must be clear that it’s even a question requiring an answer; so it’s necessary to explain that Earth is the term we use to define our land, and that we use the word “your” to refer to the collective will of all aliens (“as opposed to a single Joe Alien”); and the concept of intention, of what it means to do something with a “purpose” must be defined, too.

Colonel Weber expected the scientists to solve his problem, so he could take over the situation, but Louise’s approach inevitably clashes with the military mind-set. It also clashes with the aliens’ mentality and way of communicating. Talking a different language means thinking in a different language, and therefore creating meaning in a different way. The aliens literally express themselves through circles, creating sentences based on concepts that don’t follow the linear pattern of human communication. And the more Louise gets closer to the true meaning of their visit, the more it becomes complex and abstract.

Like Louise does with the aliens, the audience too must learn to accept Arrival’s subjective way of communicating its message. It seems particularly fitting, though, that a film entirely based on creating meaning completely defies basic understanding. Arrival itself talks in symbols: humanity’s need to understand the ETs mirrors the struggle to dialogue with other nations, to express intentions without recurring to violence. Even the plot twists fit into the story in their very own way; in this, Arrival might feel akin to a Christopher Nolan movie, but the results here are far less self-serving, less nuanced, and less integral to the story being told.

With cinematographer Bradford Young (Selma, A Most Violent Year) contributing to the film’s majestic visuals, and composer Jóhann Jóhannsson (who worked with Villeneuve on Prisoners and Sicario) creating a masterful soundtrack, Arrival is destined to be talked about forever—much like Blade Runner, which on the evidence of this movie is in very safe hands.