Returning to Hong Kong after failing to break into the US market with The Big Brawl (1980), Jackie Chan’s period movies The Young Master (1980) and Dragon Lord (1982) both underperformed at the box office, but that didn’t stop him trying again with Project A.

The film’s obscure title was intentional, as it was common practice for rivals to steal ideas based on announced titles back then, so Chan wanted to avoid calling the movie Pirate Patrol for fear his thunder would be stolen by too many pirate-related movies fast-tracked into production. He also regretted that his Drunken Master (1978) and Snake in the Eagle’s Shadow (1978) movies both had titles that gave away what was supposed to be a “surprise”, that they involved Snake Style and Drunken Fist kung fu.

Project A concerns Sgt Dragon Ma (Jackie Chan), a member of the Hong Kong Marine Police, who has to join the Police Force after two of their ships are destroyed by pirates who now want a hundred police rifles. Dragon’s transfer to the police is a bone of contention, as they have an interservice rivalry that once boiled over in a bar brawl, but he eventually wins the respect of tough Hong Tin-tsu (Yuen Biao) during his training and sets about trying to catch the pirates and some gangster they’ve allied themselves with, all with the help of his best friend Fei (Sammo Hung, who also co-directed the action). 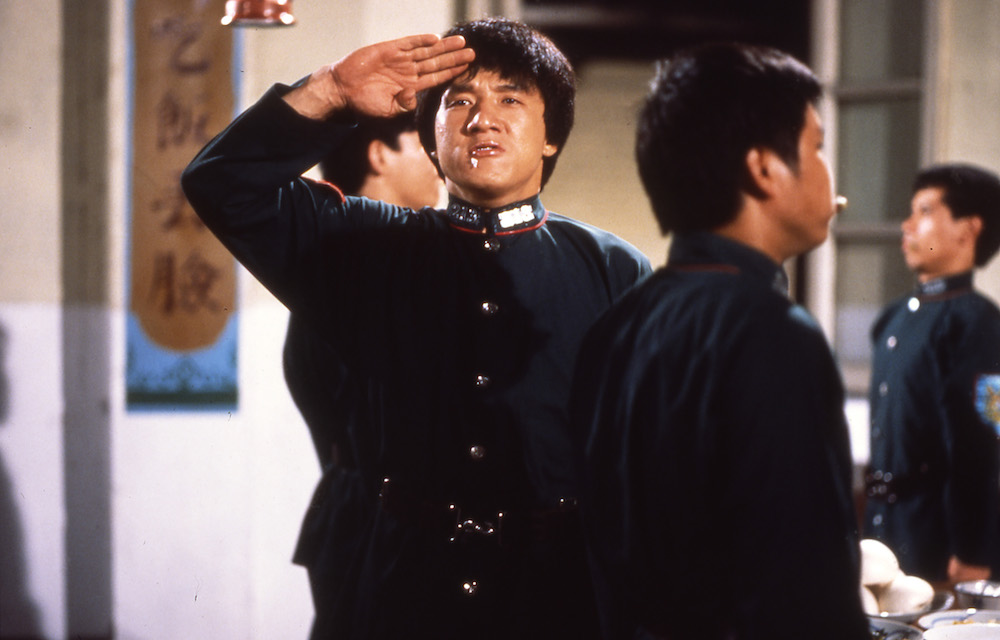 As with most of Chan’s Hong Kong movies, they’re hamstrung somewhat by losing a great deal in translation, at least in terms of the comedy. Chan’s famous for his movies having an old-fashioned slapstick appeal, but a lot of the comedy doesn’t amuse me. Tastes will vary, but the physical jokes are the best because you can appreciate the skill of delivery, if not exactly worry your sides are going to split over the sight of men having doors opened in their faces or enormous bowls of spaghetti flipped in their face.

The more nuanced comedy, what little there is, doesn’t work very well when you’re reading subtitles and can’t really enjoy the comic timing one presumes is taking place. The funniest spell of Project A is probably when the movie starts to resemble a version of Police Academy (1984), with Dragon and his buddies playing tricks on Tin-tsu because of his ball-breaking methods. Again, it’s not exactly going to cause any loud-out-loud thigh slaps, but there are a few amusing moments with a switched-out hand grenade. I even had to smile at the sheer cartoonish lunacy of a moment in a bar fight when Chan and an opponent smash each other with wooden chairs, stare stoically at each other holding splintered chair legs, then quietly step behind a pillar to exaggeratedly wince and quake with great pain. 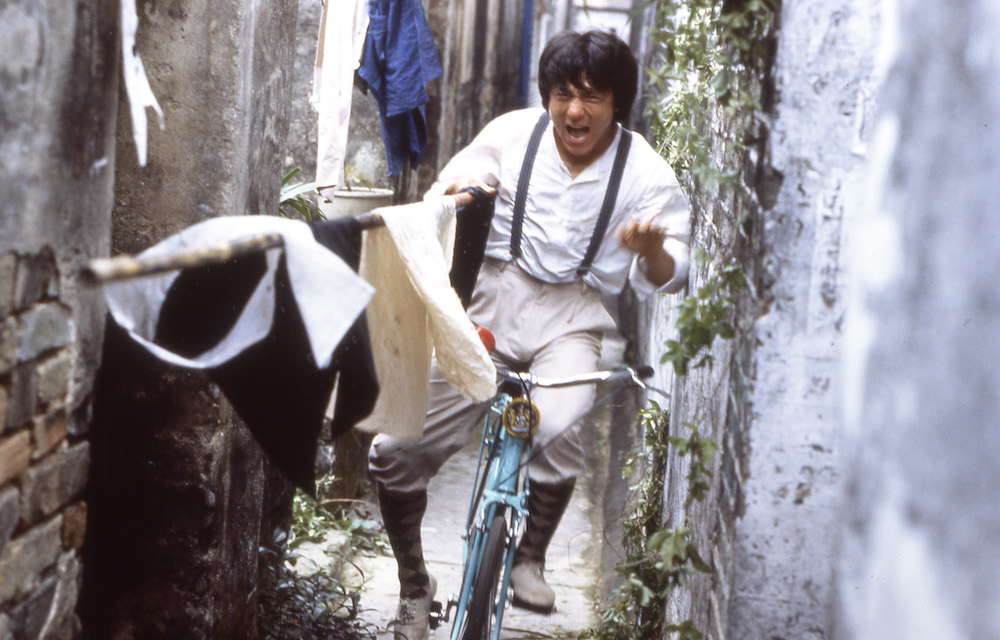 But I doubt many people are watching Jackie Chan films for the comedy and drama between the fight sequences. If you are, there’s something clearly wrong with you. There wasn’t as much action in Chan’s previous period movies, but Project A rectifies that with a steady stream of punch-ups and set-pieces. Chan’s peak with this sort of thing was yet to come, but there are some good moments with him using a bicycle as a weapon, and I particularly enjoyed the movie’s most famous stunt: Chan hanging off a clock tower, grasping one of the hands in homage to Harold Lloyd in Safety Last! (1923), before plummeting through some canopies and visibly landing on the nape of his neck. It’s a miracle he wasn’t killed but limps away trying to stay in character. You can tell that’s the highlight of the movie, as the sequence literally gets repeated twice. 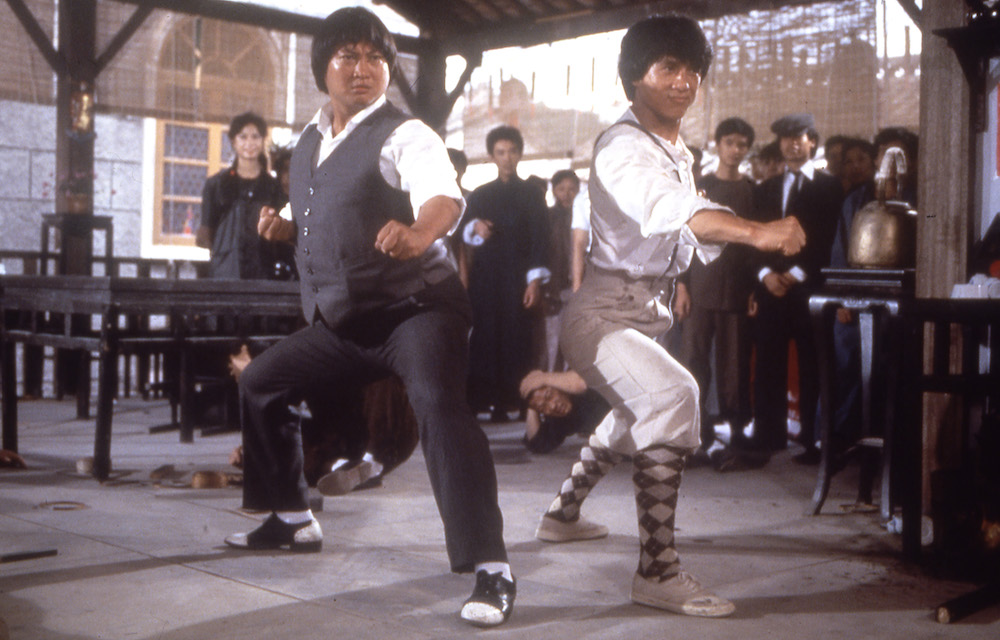 The period nature of Project A is a little strange and unconvincing at times, possibly because there are so many characters wearing military uniforms that wouldn’t look out of place in the 1980s. And I’m not sure Chinese fashion really changed all that much between the late-19th century and 1983 for the very poorest in society, who are also represented throughout the film. However, HK period movies are notorious for having a very loose discipline when it comes to historical accuracy, so maybe the production just didn’t care if many of the background characters were in contemporary clothes. It just seems a little odd when Project A starts showing pirates in colourful rags that are undoubtedly a century out of date, as you suddenly remember this entire movie’s supposed to be taking place in the 1800s. So does it make sense the cops have grenades when they only became widely used around 1915?

I also liked seeing Sammo Hung in the movie, who was almost as popular as Chan back in the day, and whose career has followed a similar path. He’s a great sidekick to Chan, and the movie certainly perks up when they’re sharing scenes together. 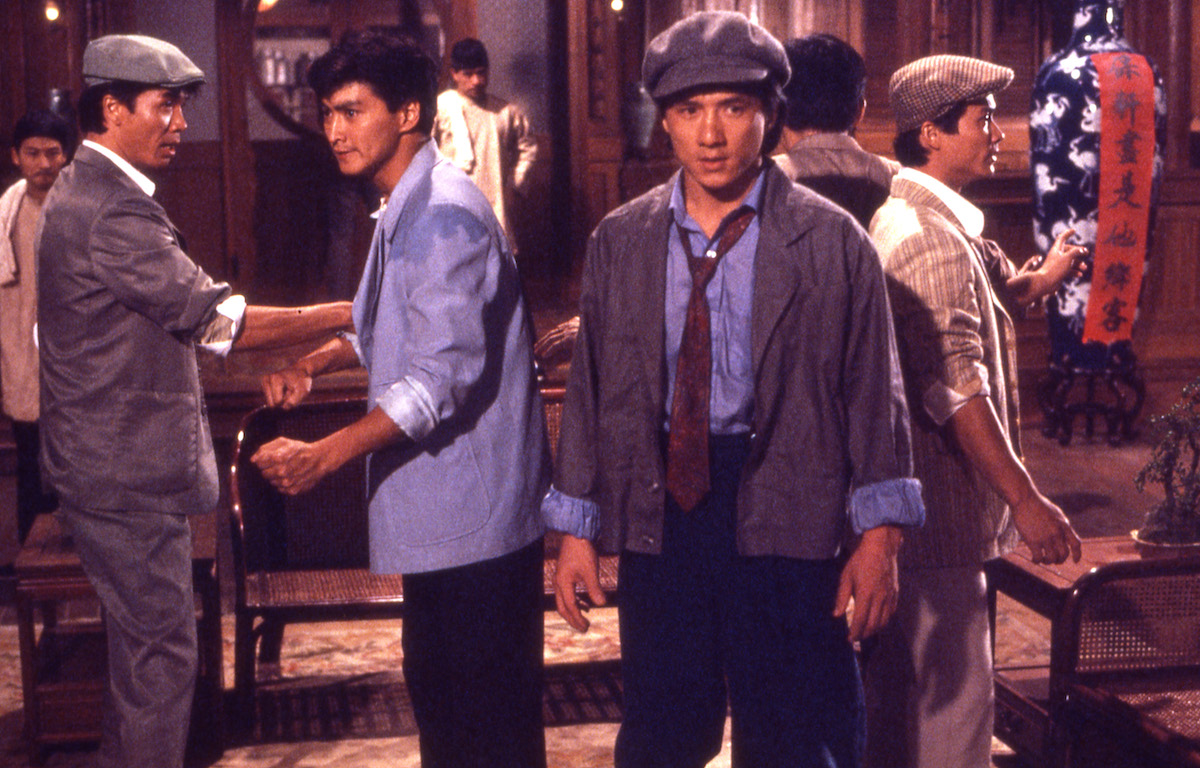 Apparently, the Japanese Emperor so enjoyed Project A that Jackie Chan felt obliged to make a sequel, following on from the huge success of Police Story (1985) and Armour of God (1986). The Project A duology feel like 19th-century Police Story films, even sharing the same mix of pros and cons.

Project A Part II is better made and more ambitious, but as with Police Story 2 (which follow in ’88) it feels like Jackie Chan focuses too much on a plot that’s hard to care about, then stupidly limits the comedy antics. Although I’m prepared to accept my criticism is born of the fact I’m a westerner watching these films decades later, and I’ve never been a diehard fan of martial arts movies. That probably helps. It’s also possible I’m conditioned to expect things a certain way because of Hollywood formulas, and therefore can’t see the merit of limiting the number of action set-pieces in what’s billed as an action movie.

Do people really watch Jackie Chan films for the comedy interludes and stories, skipping past the fight scenes? I doubt it. So while I appreciate Chan making a genuine effort to tell complex stories and not deliver mindless action spectacles, one after the other, I think his talent as a filmmaker is eclipsed by his skill choreographing punch-ups.

Project A Part II will also play better to a native audience with a stronger grasp of late-19th-century politics in China. 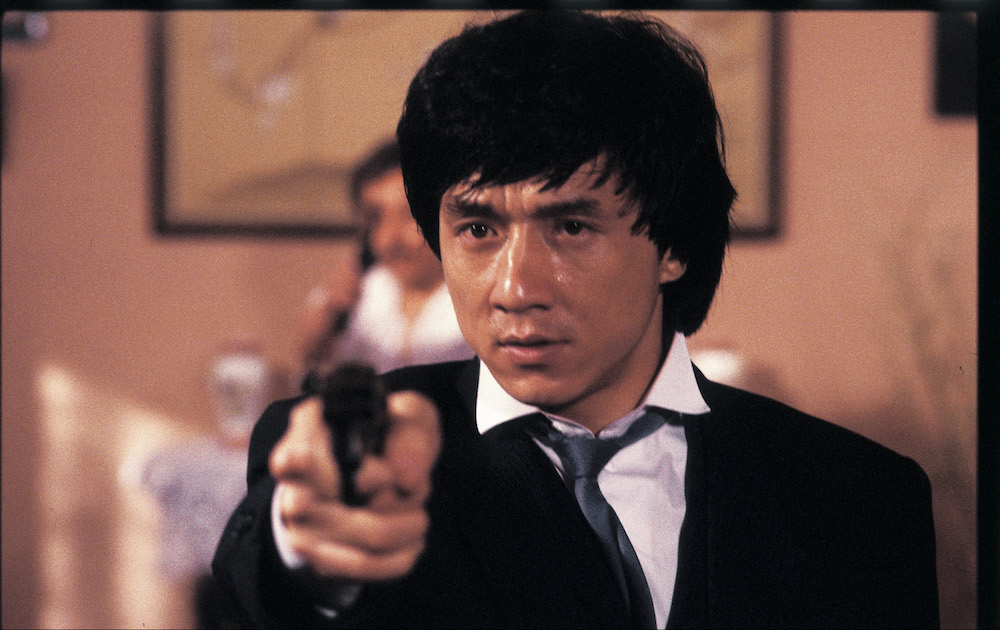 In the sequel, Dragon is transferred to the tough Sai Wan district to lead the police there and stop a gangster kingpin, anti-Manchu revolutionaries, runaway pirates, and Manchu loyalists. All while dealing with a corrupt Police Superintendent Chun (David Lam). It’s an overstuffed movie, and yet somehow seems to take half an hour to get going, before ultimately spinning its wheels for just as long. I didn’t enjoy Project A very much because the story was thin and the action wasn’t quite to the standard I expect of Chan because of Police Story, but this sequel’s disappointing because the story’s much richer but somehow less involving and the action’s better but less pronounced.

Beyond the occasional fight here and there, of which Chan’s strangely close to being defeated, it’s only in the climax that Project A Part II starts to come alive. There’s a particularly entertaining moment with Chan running down a slowly collapsing wall, that segues into a homage to a classic Buster Keaton’s Steamboat Bill, Jr. (1928) shot of Chan standing in the exact right spot to avoid being crushed by a wall because a window section passes over him. (Although, I swear Blu-ray’s high-definition reveals Chan pretty much just smashes through part of the wall anyway?) There’s also the first fight almost won by smearing chilli onto an opponent’s face, which is cool. 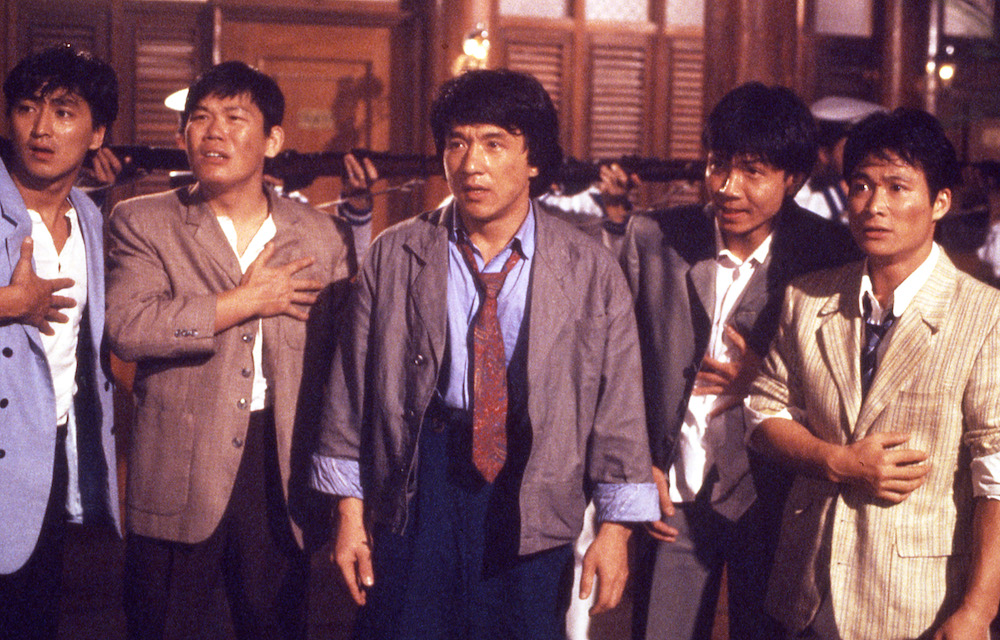 The only thing I preferred in Part II over the original was the clearer since this was a historical piece, as there are more obviously old-fashioned costumes and set decoration that sells the 19th-century time period. That also helped differentiate it between the Police Story films, as Chan’s essentially playing the same character—of course.

I hate sounding harsh, but these Project A films just aren’t for me. I found them too slow, often impenetrable, bogged down with unfunny slapstick and ear-aching music, and with tangled storylines that didn’t draw me in. When the fights and stunts do arrive, Jackie Chan keeps proving he was one of the best physical performers around (maybe still is), but I’m the kind of moviegoer who needs to feel something for the situation and characters embroiled in a huge set-piece. Otherwise, it’s just well-staged choreography punctuating muddled and uninteresting exposition. A YouTube compilation of these movie’s best bits might even be preferable? Oh, and Part II sorely misses Sammo Hung and Yuen Biao, who both didn’t return because they were busy shooting Eastern Condors (1987). 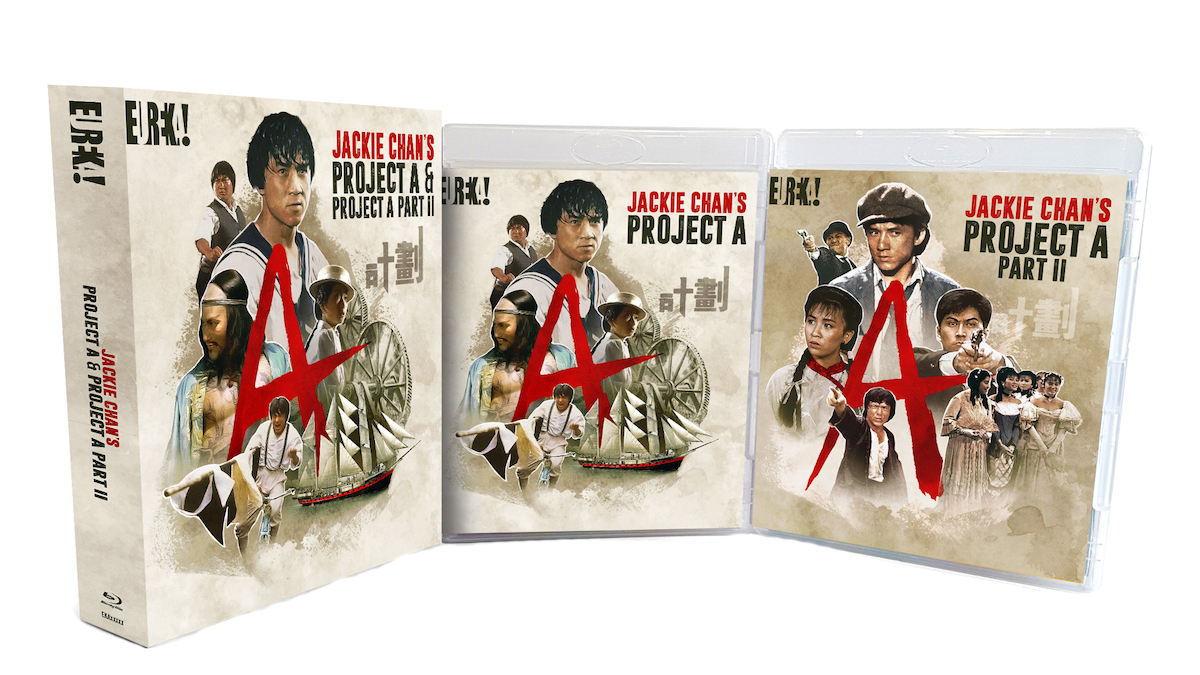 Both Project A movies are presented in new 2K restorations, uncut, in a Limited Edition Box Set. While not as “fresh” looking as Eureka Entertainment’s previous Police Story box-set, these movies don’t look too bad. Colours are strong but blacks aren’t particularly deep, and the image retains a level of film grain throughout. The DTS-HD 5.1 Master Audio tracks (both in original Cantonese and English) are a moderate improvement over the original audio, but only really provide a bit of occasional ambience through the rears and a slightly better punch to the bass levels.