The true-crime genre has been having a bit of a moment over the past few years. Netflix’s Making A Murderer and Conversations with a Serial Killer: The Ted Bundy Tapes inspired many workplace conversations. People kicked off their shoes at the end of a tough day and unwound with epic stories about spousal murder and didn’t feel weird about it. Not only was it accepted, but it was celebrated. We talked about The Jinx’s Robert Durst as if he were a villain on a soap opera. We made funny Valentine’s Day cards based on lawyers. Murder has always been good business.

And so it was only a matter of time before something was made of the Charles Manson story (particularly after his death in 2017). Instead of a ten-part docuseries, here we’re given the slightly rarer artefact: an old fashioned, 100-minute movie. Directed by Mary Harron (American Psycho), Charlie Says tackles the oft-covered ground of the Manson Cult, but this time from the perspective of three members of the so-called ‘Manson Family’.

Imprisoned after a double-homicide, the film’s structure primarily follows the flashbacks of Leslie Van Houten (Hannah Murray), from her young and naive induction into the cult up to the night of her crimes. The story unfolds over an undetermined and seemingly malleable period of time. Dates are rarely discussed—the only time is now, Charlie (Matt Smith) tells us. We know this is the end of the 1960s, when the dream of revolution had passed through the momentous engine and coughed defeatedly out its exhaust in a cloud of smoke, dissipating into thin air. Brutal conservatism crushed hopeful idealism; violent fascism took out a people’s revolution. And in many ways, the followers of Charlie are experiencing death as the ’60s ended. 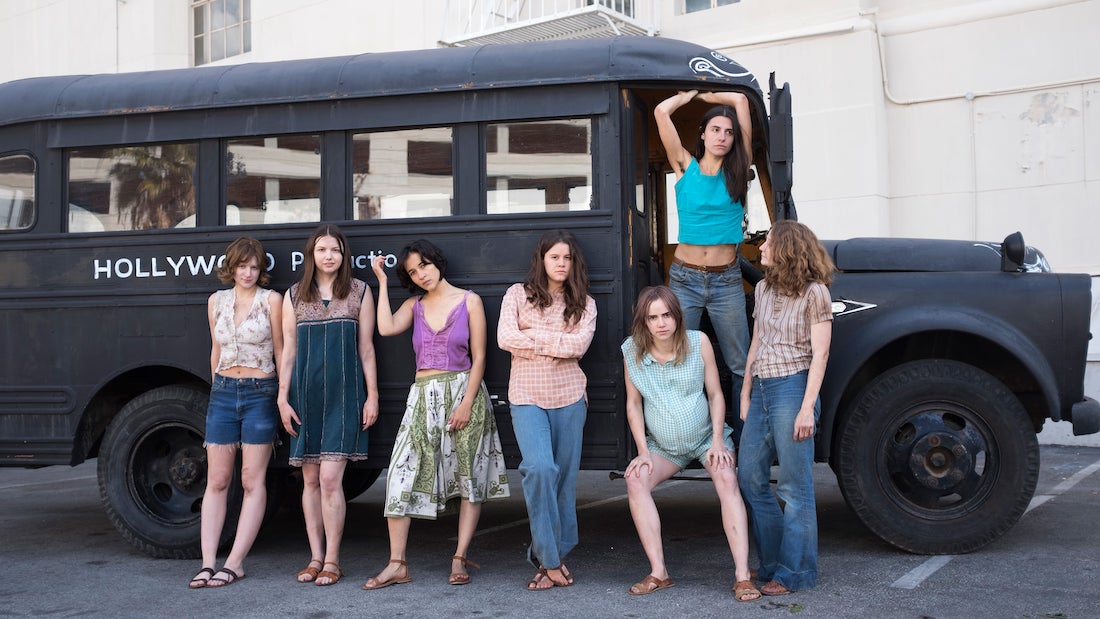 It might not be the ego-death that Charlie so inscrutably talks about, but instead the death that comes with awakening from a dream that really meant nothing. They’re slow to come around. In the prison, Graduate student Karlene Faith (Merritt Wever) is determined to undo the damage wrought on the girls by Charlie. She gives them books on Women’s Liberation and pushes them to process their moral stance on what happened. “I just wanna give them back themselves”, she tells a colleague after a difficult session of trying to push the girls past their indoctrinated praising of Charlie. “Maybe these women are victims too.”

Karlene’s job functions in the same way that Mary Harron’s does—and is equally as tricky. Harron is presenting a case for these women and attempting to offer them a voice. Here is where things get morally complex, or, perhaps, where they should. The strength of the hook—the Manson murders from the perspective of his followers—is left frustratingly underdeveloped. Leslie (renamed Lulu by Charlie) leads us into the cult of Manson, but while we spend a lot of time sitting in the California sun listening to Charlie’s ramblings we’re never led much deeper.

Much of this has to do with the bits-and-pieces structure of the flashbacks. Scenes are distracted and short, and conclusions are arrived at without much of an idea why. It doesn’t take much for Leslie to go along with Charlie and his heinous actions, but Guinevere Turner’s screenplay lacks the necessary depth to help us understand why she agrees to it all. When a woman is beaten by Charlie in a petulant rage, why does Leslie just accept it? When looking at a filthy, dilapidated saloon, why does she so readily call it home? The film doesn’t interrogate specifics and, as a result, it lacks a distinct direction or sense of identity. Endless scenes of Charlie playing his guitar and singing nonsense leave the lingering taste of futility.

We’re kept outside by a burning ring of violence and delusion surrounding Charlie, but we’re shut out from Leslie by a vague indifference—in both her performance and in the writing. There’s simply not enough variety to her character; she undergoes no meaningful transformation. The Leslie we meet in the beginning is not different in any apparent way to the ‘Lulu’ who commits the awful crimes. That, one could argue, is a key point of the film. But it seems a flaw rather than an intentional feature; an avenue unexplored by a film with the sole purposes of exploring it. Most scenes find us outside in the choking desert dust. It fits. There is little interiority to the locations or the characters. 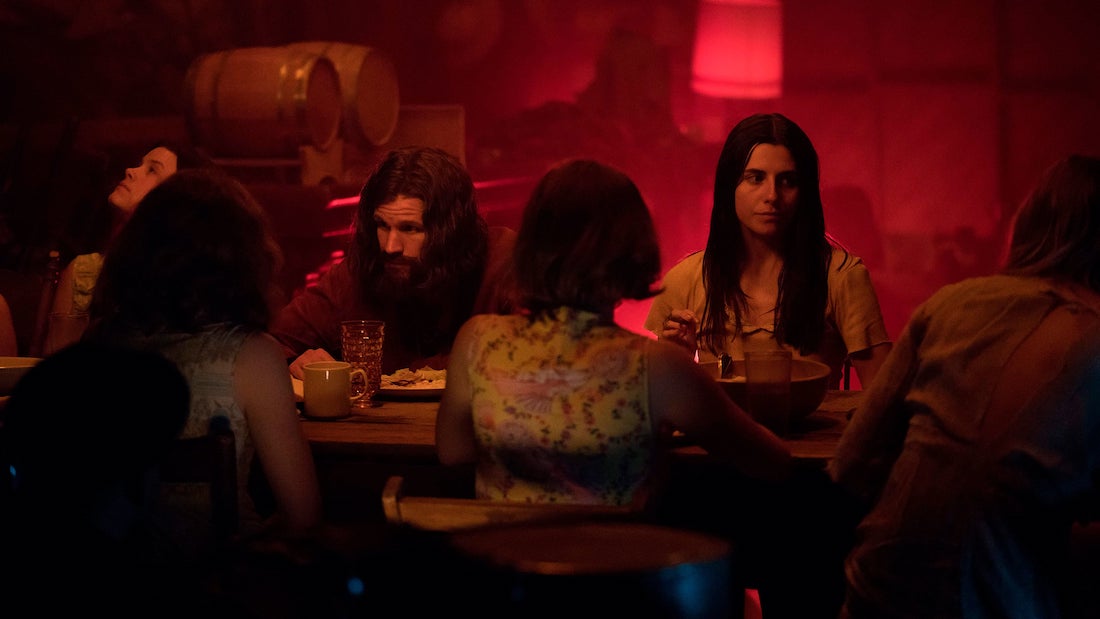 There are occasional moments of development that click. Charlie’s music is rejected by Beach Boy Dennis Wilson (James Trevena-Brown); Charlie saves face by telling his followers some self-aggrandising spiel, before destroying his guitar in a shed. Not long afterwards, he plots his first murders. Here the film has cohesion and a sense of narrative progression, with the suggestion that Charlie’s failures and rejections incited some of his most violent impulses. The issue is, this is a widely-known and much-discussed suggestion.

Particularly troublesome is that Charlie Says offers this development to Charlie while the women it is supposedly about are offered sparingly little. One gets the sense of the film having its cake and eating it too; it claims to not be about Manson but it can’t help but be. It purports to align with his converts, but it can’t resist the two-dimensional charisma of Manson. Matt Smith (Doctor Who), who’s excellent in the role and is uncanny at capturing Manson, makes for a commanding screen presence… but Harron can’t seem to decide whether he’s her protagonist or not.

It’s tempting to imagine a version of the film that doesn’t feature Manson at all. Perhaps the best biopic of the decade, Jackie (2016), wisely didn’t give her husband John F. Kennedy substantial screen time. The film positions him as a ghost, gone before he’s even dead. It’s Jackie’s story. If Charlie Says is Leslie’s story, then keeping Manson an unseen phantom might have been the boldest and best decision. But then, of course, the film would be stripped of its greatest asset in Smith’s amazing performance, and much of its marketing appeal. 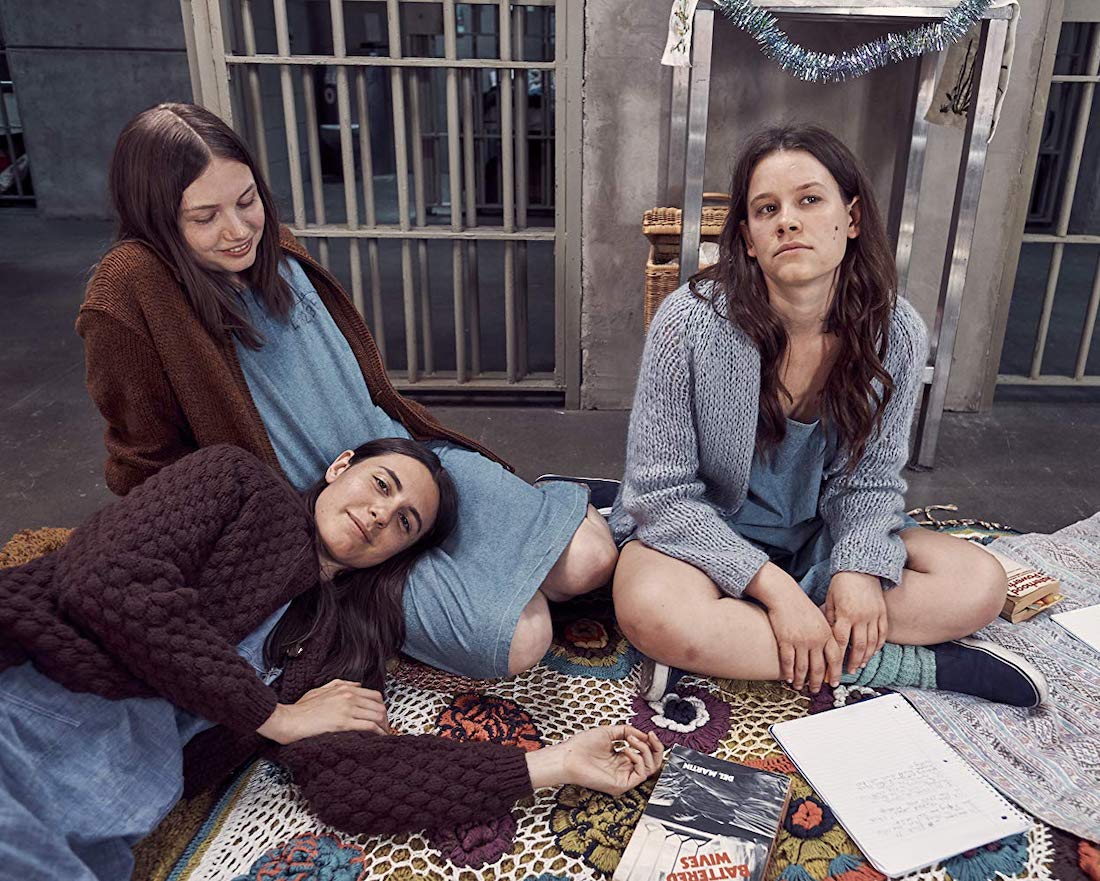 The scenes set on the Manson Ranch have some formal intrigue. The golden lighting of a California dusk counterbalances the darkness of Manson’s eyes with unnerving results. By contrast, the scenes set within the prison walls are painted with cold blues and geometric angles. Harron and cinematographer Crille Forsberg shoot soberly, at times stiflingly so. When the film’s recollections of hedonistic free-for-alls should feel dangerous, they come across as a little too controlled.

Compared with the depiction of cultish intoxication and madness in Ari Aster’s recent Midsommar (2019), Charlie Says style can feel safe and afraid to immerse. While the former had a cinematic indulgence to match its characters, the latter comes across as somewhat lifeless. For a film about the ’60s, it carries surprisingly little of that decade’s energy and dynamism. It settles for era-specific needle-drops in place of genuine ’60s spirit.

There are stronger moments. A dinner-table scene manages to instil an end-times atmosphere, not to mention a visual echo of “The Last Supper”. Another scene, set on a cliff-edge, with queasy shallow focus and a setting sun burning its last before setting forever, nicely captures an intense intimacy between Leslie and Charlie. 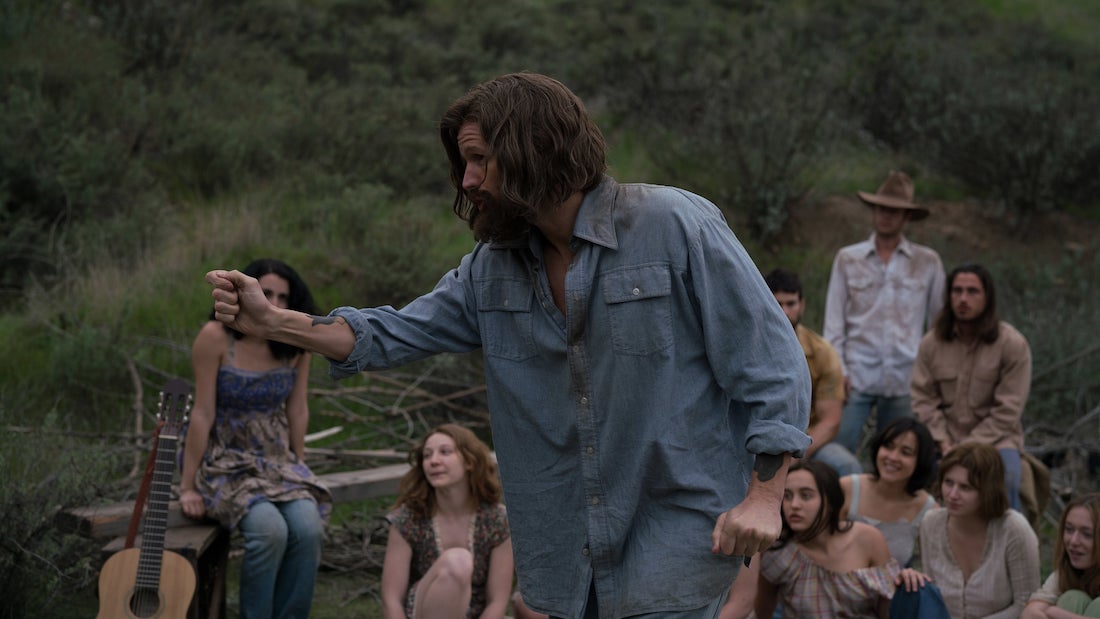 Yet when the film inevitably reaches the moments that recreate real-life murders, it proceeds with a dispiritingly uninventive approach. Unfolding with a lack of urgency and clarity, the scene then reaches for an emotional beat that it hasn’t quite earned. Hannah Murray attempts to give the moment human thrust but the power is negated and numbed, falling far short of approaching anything genuinely troubling. The film arrives at this moment obliquely and ends not long afterwards, at a seemingly random point.

Nihilism doesn’t seem to be the point of this film, but it is the result. The trickiness of talking about any film that interrogates violence is it can be defended by four simple words: pointlessness is the point. Funny Games (1997) made pointlessness its central theme… yet Charlie Says wants to be something else. It wants to be a film that talks about how powerful men exploit women—which is absolutely true and worthy of exploration. Sadly the film has little to say about how it happens, why it happens, or how it impacts those women.

Marginal light is shone on these ideas, or on the Manson case itself. Add to that its structural strangeness and fragmented style of storytelling and you’re left with scraps instead of what should’ve been a full meal. It’s frustrating, given the potential. Harron’s American Psycho (2000) was a hilariously terrifying satire of misogyny and the elite and was far better than its source novel. She’s a good filmmaker with a sharpness that can lacerate and sting. It’s a shame that, in Charlie Says, her razor is replaced by a butterknife. 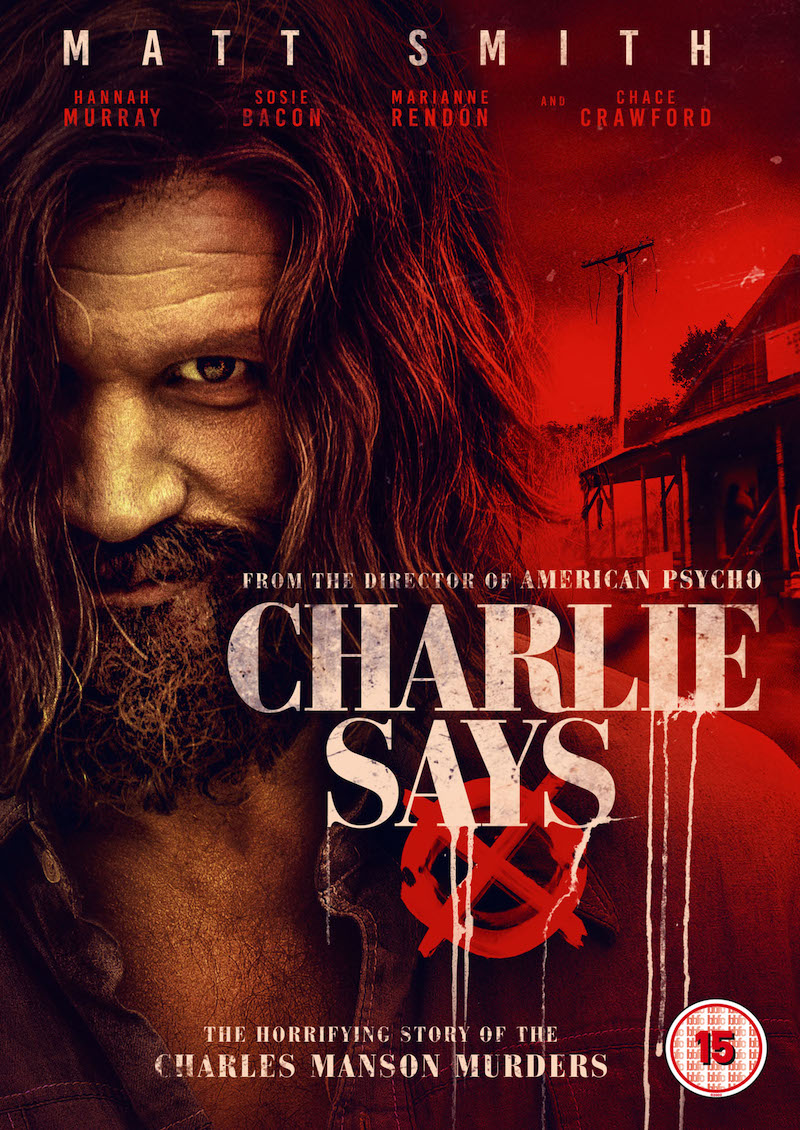