Based on Thomas P. Cullinan’s 1966 novel, The Beguiled doesn’t see Sofia Coppola leave her comfort zone but instead redecorate it. Although previously adapted in 1971, with Clint Eastwood in the lead role, the two films have few other similarities. Set in an all-female Seminary circle in 1864 Virginia, the story begins when the youngest student comes home with a wounded union soldier (Colin Farrell). Coppola became only the second woman to win Best Director for this drama about young, repressed desire.

A southern melodrama, there’s a fraught feeling throughout the film, from the wounded handsome soldier at the mercy of young women, and a group of cherubic blonde females lusting over a semi-clothed man. Severe headmistress Nicole Kidman and Coppola’s muse Kirsten Dunst are both emotional and alarmed by the wounded Irish soldier but are also keen to show Christian charity. The standout of the film is Elle Fanning’s Alicia, who seems to attract male attention more than her two seniors. Coppola brings a feminist perspective to this story, a more subtle narrative that removes sexualised fantasies and replaces them with buried female anger.

This movie, by New York duo Josh and Benny Safdie, is brutal. Lead character Constantine Nikas (played by a freshly bleached blonde Robert Pattinson) is a criminal, but not an aggressive one; he robs banks but winces at violence on TV, never uses a gun, and protects his handicapped brother (played by co-director Benny) with his life.

Connie’s plan is to execute a bank robbery, hoping his disabled brother won’t fully understand what they’re doing, but it goes wrong. The second and real heist is Constantine trying to release his sibling from a hospital prison. Set over one night and shot in a lurid neon colour palette, Good Time features a killer soundtrack featuring original music from Iggy Pop.

This follow up to Safdies’ poetic Heaven Knows What is half violent thriller, half dysfunctional love story between two brothers, described as a Michael Mann heist executed by two Tarantino characters.

Good Time is released in the US on 11 August. A UK release date is yet to be announced.

Carol director Todd Hayne returns with another awards contender. Wonderstruck plays as two bittersweet films. In 1927, 12-year-old urchin Rose is a deaf runaway seeking redemption in New York City. She watches a silent film starring a fabled Hollywood star (Julianne More in a very Lillian Gish role), and the movie cuts between this story and 1977, where we meet Ben, who fights isolation in a small rural town at the moment he’s about to lose his free-spirited mother (Michelle Williams).

Through a freak accident and a love note written on a bookmark, Ben sets off the New York to discover his past. The two stories are woven together through the loneliness of its two characters and the bustling streets of the Big Apple.

Although an adaption of a half-illustrated children’s novel The Invention of Hugo Cabret, by Brian Selznick, Wonderstruck is a film that encapsulates Haynes’ prosaic and often poetic style. This fable is a perfect way of expressing the extent people can be defined by their queerness and how differences can bring people together.

Wonderstruck is set for release in the autumn. 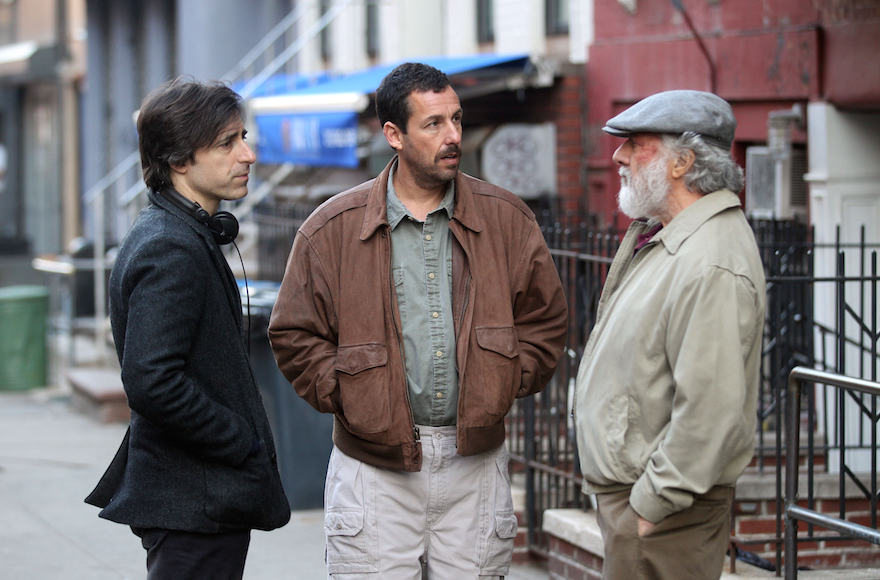 4. The Meyerowitz Stories (New and Selected)

This is one of the films that most stirred controversy in Cannes because it was produced by streaming giant Netflix, which some critics view as the antithesis of cinema. The Meyerowitz Stories resolves around a dysfunctional family led by cantankerous sculptor Harold (Dustin Hoffman). Ben Stiller plays his wealthy L.A accountant son, while Adam Sandler earned rave reviews as his less poorer half-brother Danny. The pair are trying to organise a retrospective show to Harold, who never gained the fame or respect of his peers, while his partner (Emma Thompson) is keen to sell their family home. This film is filled a vivid ensemble of characters, the kind that are more likely to be shown on shows like Transparent.

Written and directed by Noah Baumbach (The Squid and the Whale), The Meyerowitz Stories is a tale of a family that still hasn’t quite figured out how to live with and accept each other’s failings. There’s a touch of Hannah and Her Sisters to the song, and it also feels like a cousin to The Royal Tenenbaums.

The film will run in limited US theatres and is released on Netflix this autumn.

Sean Baker shot to fame 2 years ago with Tangerine, a film about transgender prostitutes and the underbelly of L.A, which was praised for being filmed entirely on an iPhone yet containing more atmosphere than an expensive high-tech camera. Not wanting to reuse the gimmick, his new film is filmed in 35mm, heightening everything people loved about the lo-fi Tangerine.

Baker returns for The Florida Project, another story about the desperation of the dysfunctional; Halley has blue hair, tattoos, and a 6-year-old daughter called Moonee who mirrors her selfish and hostile attitude. The pair live in a motel in Orlando, Florida (on the outskirts of Walt Disney World) where they struggle with making enough money, as Halley is unable to work or look after her child. Moonee (Brooklyn Prince) steals the film as the smart and unapologetic young girl amongst a cast of unknowns (the only recognisable face is Willem Dafoe).

The anarchic film is as manic as it is beautiful; a fresh take on people living impossible lives. There is currently no release date.

6. The Killing of a Sacred Deer

This film tells you what horrible fate awaits its lead characters and then forces you to watch the entire film wondering when it’ll happen. Steven (Colin Farrell) is a recovering alcoholic and cardiologist who’s brought a curse on his family due to neglecting an unsettling patient.

Lanthimos (whose English language breakthrough was The Lobster) delivers genuine scares as the supernatural curse slowly takes out every one of Steven’s family members (including his wife, played by Nicole Kidman). There’s a Lynchian level of dread and cryptic dialogue, but with a nod to vintage Roman Polanski. Farrell’s been praised for the gravitas he brings to the role as a professional man who never stops showing professionalism in his private life.

An icy nightmare from an idiosyncratic director who weaves in the Greek myth of Iphigenia, making this so much more than just another supernatural horror film. The Killing of a Sacred Deer will be released in November.

7. You Were Never Really Here

Lynne Ramsay makes a triumphant return with a stark hitman thriller, fronted by Joaquin Phoenix. You Were Never Really Here arrives 6 years after We Need To Talk About Kevin and her dramatic departure from directing Jane Got A Gun. Adapted from Jonathan Ames’s 2013 novel by Ramsay (her first solo screenplay since 1999’s Ratcatcher), the movie slowly exposes the soul of an ex-FBI and Gulf War Veteran Joe (Phoenix) who now works as a hitman specialising in the sex slavery trade. Joe’s boldly introduced to the audience in the middle of another suicide attempt, as he’s a quiet man who reserves any kindness left in him towards his elderly mother.

This film is far more concerned with what’s happening inside this furious man’s head rather than his latest job, saving a New York senator’s daughter from a paedophile ring after she’s kidnapped. Phoenix and Ramsay are a cinematic match made in heaven, as her brooding directing style perfectly matches his fury-filled features.

Ramsay shared the screenwriting award at Cannes for this film with The Killing of a Sacred Deer, and its star, Joaquin Phoenix, won Best Actor to his own shock. These awards came after a 7-minute standing ovation at the film’s premiere. There is currently no release date.

Andrey Zvyagintsev dissects contemporary Russian in his first film since Leviathan, telling the story of a divorcing couple whose apathy has reached their 12-year-old son. When the boy disappears, his parents have to put aside their differences to find him. Loveless is made in a deliberately forceful socialist Hitchcockian style. In some ways it’s a missing child procedural, but in other ways it’s a film about the lack of empathy washing over society at the moment.

Don’t expect a love story but a film about the crisis of the classes and the war between genders brewing in Russia. This films speaks to themes that don’t have borders or nationalities, confronting audiences with the unthinkable tragedies of life and the complexities of family, it also represents children as being a moral duty which is somehow supposed to reward.

The film will be released in Russia on 1 June, but no UK release date has yet been announced.

In this Swedish satire, we meet Christian (Claes Bang) a curator at a modern art museum, who protects a woman from what he thinks is a street attack, only to realise it’s an elaborate pickpocketing scam. Christian resumes planning an art installation about equal rights whilst running around Tesla trying to find his stolen phone and wallet, neglecting his work after being distracted by journalist (Elisabeth Moss) and his vigilante mission.

Director Ruben Ostlund has an eye for the subtleties of human interaction and public behaviour. There’s great joy in how lacking in self-awareness Christian is; the wannabe vigilante totally unaware of his privileged and passive hypocrisy. Taking some by surprise, The Square won the coveted Palme d’Or, the highest honour given by the Cannes Film Festival (won last year by I, Daniel Blake).

The Square will hit cinemas in August 2017.

Michael Haneke (Funny Games) returns to his favourite topics in Happy End, a film about how the wealthy and privileged can corrupt and distort humanity. It has all the directors favourite topics: intergenerational revenge, guilt, and repression, with a heavy dose of family dysfunction.

In the film, a bourgeoisie family are secretly generations of psychopaths, disguised behind altruism, especially in their actions towards their immigrant servants. Isabelle Huppert (Elle) plays Anne, a woman engaged to a British lawyer (Toby Jones), who takes over the lucrative family construction and transport business from her dementia-addled father. Her father’s waited on by Moroccan servants often subjected to patronising racism, while Anne’s deadbeat son causes chaos within the company, as her brother deals with his own daughter. Everything is set to the backdrop of the migrant crisis in Calais.

While not really a horror or a thriller, Happy End is the cousin of a genre movie with grisly comedy thrown in for good measure, with some critics hailing it a satanic soap opera.

Happy End will be released this autumn in the UK.