This wasn’t what I imagined the series finale of The Leftovers would be, but that’s a compliment. Considering showrunner Damon Lindelof’s repeated quote that viewers shouldn’t expect answers to the show’s key question (where did 2% of the population vanish to?), I was pleased we did get an answer to that — well, perhaps — while avoiding the trickier question: why did 2% of the population vanish? Regardless of how successful you think this finale was in terms of resolving its mysteries, The Leftovers avoided the trap Lost fell into by making its mysteries too much of the draw for viewers. The Leftovers represented a more mature approach to how you ‘spin a mystery’ without disappointing people with explanations that can only disappoint.

As expected, the finale involved Nora Durst (Carrie Coon) getting the chance to sit inside the strange contraption she travelled to Australia to debunk, which has secretly sending people to wherever the departed went. These early scenes were mesmerising, as Nora said goodbye to her terminally ill brother Matt (Christopher Eccleston) over a silly game of Madlibs, before stripping naked and walking into the back of a truck, sitting inside a glass ball, which was filled with ‘water’ that could be irradiated, before, apparently, being zapped to her final destination.

It was a very eerie and engrossing sequence, which had me on the edge of my seat, waiting to see if Nora’s been duped out of her $20,000 or not. Naturally, the finale then spent the majority of its 70-minutes teasing us over what happened afterwards, as the scene whisked us into ‘the future’, or perhaps ‘an alternate universe’, which we’d previously glimpsed in the premiere’s denouement with an aged Nora collecting pigeons. 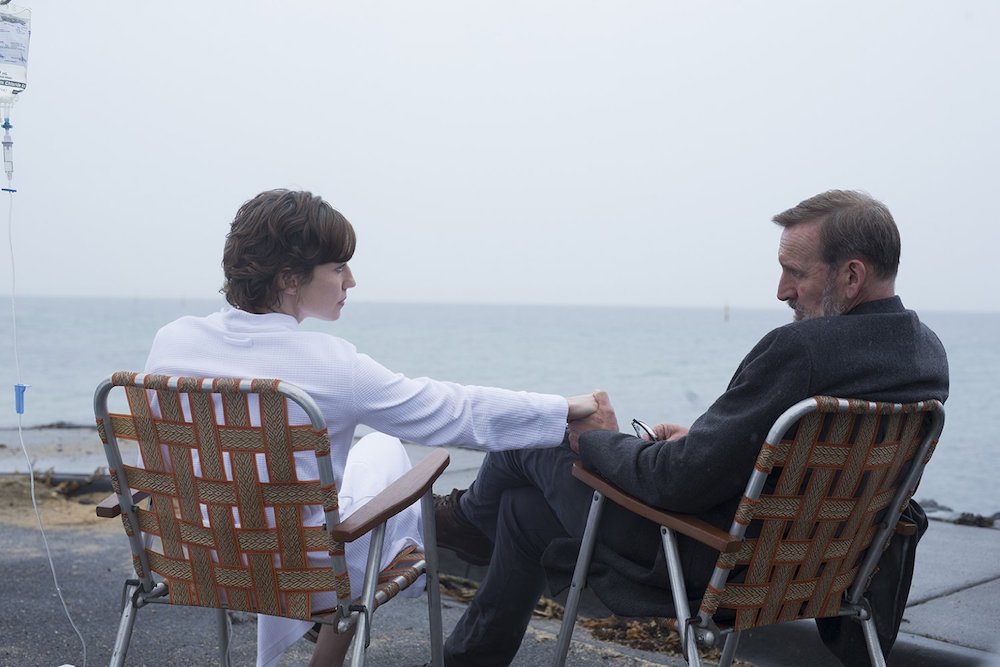 Very cleverly, the show kept its cards close to its chest, and delighted in keeping us guessing. Time had undeniably passed since we last saw Nora sat inside the scientist’s glass machine, but was she still in ‘our’ Australia, or was this all taking place on “Earth-2”? I’m sure I wasn’t alone in soaking up the finale’s dialogue and scenes, for clues to what happened. For awhile, it felt like this was indeed ‘another place’, which Nora had been lived in for decades since her departure in the truck, but then where were the children she went to see?

And when a similarly aged Kevin (Justin Theroux) appeared on Nora’s doorstep, asking her to a dance in town, apparently oblivious to their history together (beyond their chance meeting in a hallway), it seemed even more credible that Nora wasn’t in “Kansas” anymore. But this wasn’t an alternate-Kevin, somehow destined to meet her in this world, too. It was her ex-boyfriend the police chief, who eventually confessed he’s spent years searching for her, two-week’s vacation every year in Australia at a time, refusing to accept Matt’s word that Nora died.

And in Nora’s final scene with Kevin, in her homestead over a cup of tea together, she revealed what happened after entering that glass dome. Nora said she appeared on a the tarmac, alone, the scientists and their equipment nowhere to be seen, before walking miles into the countryside, stealing clothes from an abandoned store along the way. But even during this story, it felt possible Nora was confessing she’d been duped by the scientists. I was entertaining the idea that Nora had just taken the opportunity to make a new life for herself, sending Matt home with a story about her demise, after finally making peace that seeing her family again won’t ever happen. But, no. As the story continued, it became clear that Nora had indeed found what she came for: an alternate world, where 98% of the world’s population had vanished on the same day of the Great Departure, meaning their society is a shell of its former self. 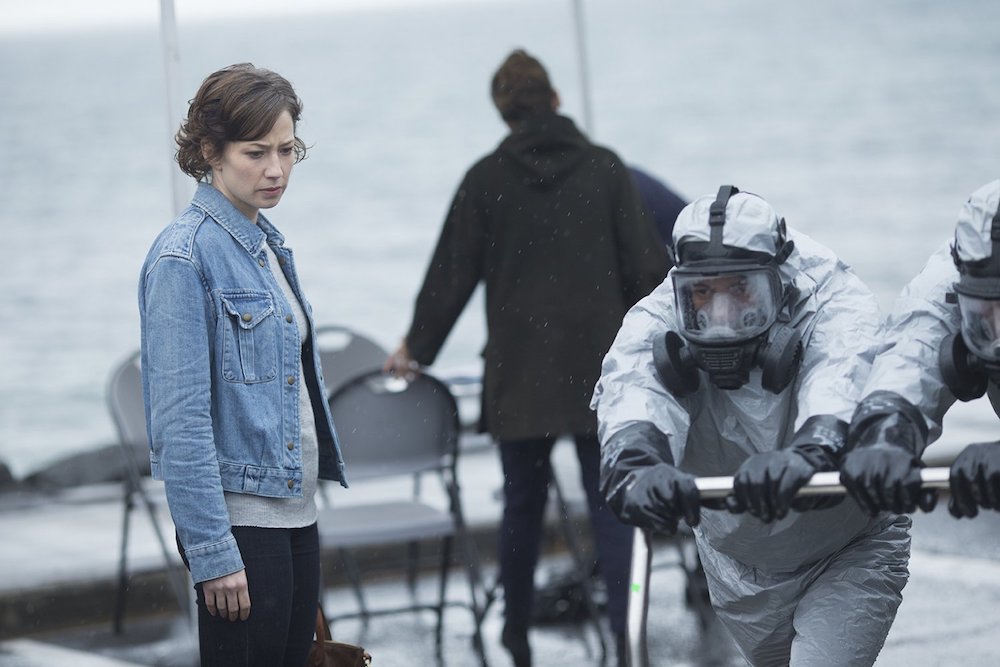 I’d posited this theory myself, a few times, that there was a kind of cosmic split and we’ve been watching the “luckier half” of the estranged global population — who lost friends and loved ones, but still had a functioning society of billions to live amongst for support. The darker place Nora went to sounded much scarier and isolating, taking her years to make it back to New York from Australia, to try and find her missing family. And yet, when she eventually found them, her kids were obviously much older, her husband had since remarried someone prettier, and Nora suddenly realised she was merely a ghost from the past to them. She no longer had a place in their new family. And compared to many other people in Earth-2, Nora’s family were one of the fortunate groups — as they’d only lost a mother that fateful day. Nora had gone through the worst of things on Earth-1, but in finding them she realised her presence isn’t necessary and it was better for her to return to her original world.

The tragedy of Nora’s return, after finding the device’s inventor and making him create another machine, was that she chose to hide from everyone she knew after coming back. She became a recluse in Australia and, beyond keeping contact with her therapist Laurie (Amy Brenneman), decided to turn her back on everyone she knew. Incidentally, the presence of Laurie was one of the episode’s more slippery elements, as it seemed more than likely Laurie committed suicide at the end of “Certified”, which is what made me think the older Nora’s scenes were taking place in a kind of alternate universe (where the dead like Laurie exist alongside those who departed, perhaps). But it seems Laurie’s SCUBA session didn’t end tragically. So it’s nice to know the Garvey children didn’t have to deal with losing their mother. 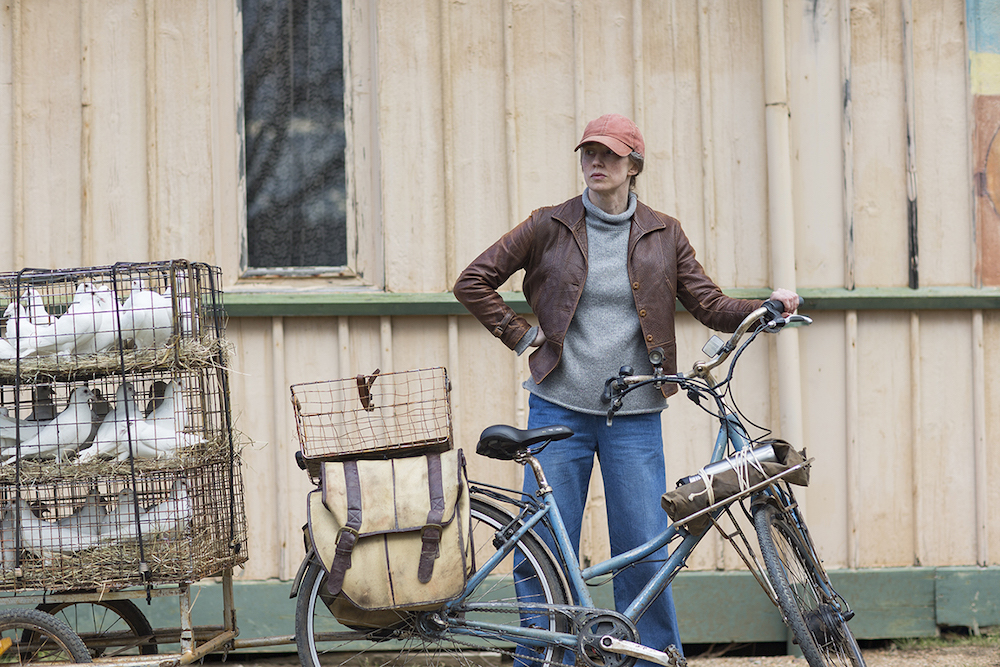 Of course, we never saw any of what Nora described on camera, and intentionally so.

It was Nora’s incredible anecdote; to be believed or disbelieved. And Nora could easily be lying, it’s true. Maybe she was the victim of a terrible scam by those scientists, but now finds solace in telling herself this alternative truth? But all that matters if that Kevin chooses to believe her story, even if ‘The Book of Nora’ is as open to interpretation as the ‘Book of Kevin’ was in some people’s eyes.

Stepping away from “the answers” this finale presented us with, it was mostly another very good character study. The Leftovers has always been about people grieving for extreme losses, and hating themselves for “wishing away” their loved-ones (and it happening), so the finale offered a beacon of hope in so many ways. We didn’t get a fairy tale ending where the 2% returned as magically as they vanished, but we saw Nora had achieved a kind of peace by visiting where they went to, and by the end of this instalment she realised the depth and strength of Kevin’s love for her. He refused to accept she was dead and spent years searching for her. What a man. Nora had become one of the departed for him, in a very real sense, but Kevin actually got his fairy tale ending through sheer perseverance. The show have us a happy ending through their reacquaintance and acceptance of each other. Nora will overcome her reclusiveness now, joined by the man who proved his love. Even Nora’s missing pigeons came home in the final shot. 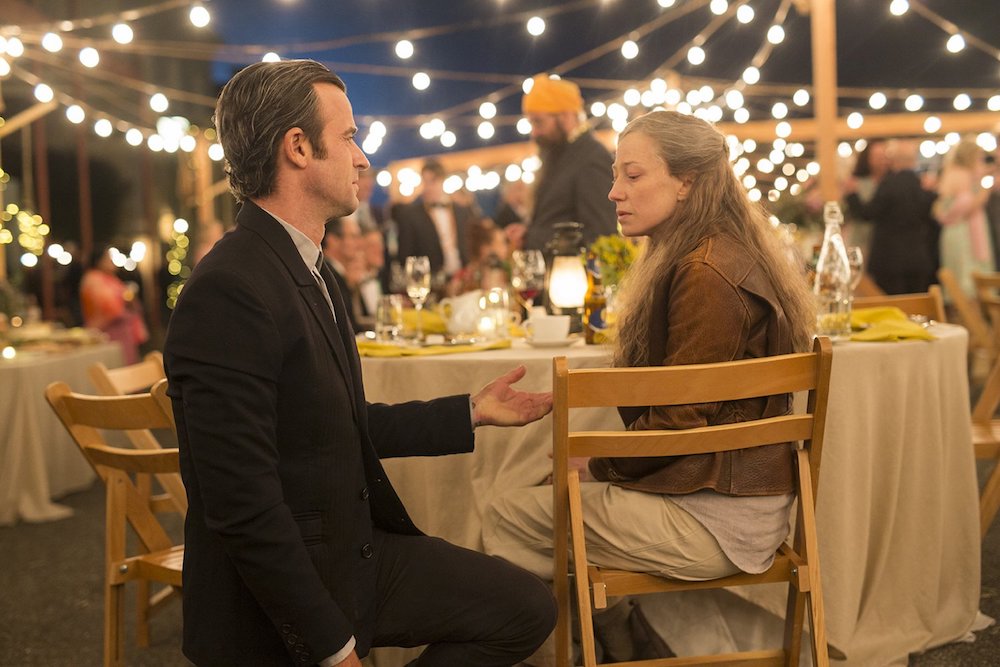 The Leftovers has been a remarkable but sadly overlooked drama, that I hope more people become acquainted with over time. The first season’s a difficult one to acclimate to (although I have a feeling it’ll work much better with a revisit now), the second season was the creative highlight (an astonishing creative improvement), and this third season’s been a very satisfying embrace of the quirkier, fantastical side of that year’s storytelling.

Most of it was a success, and the performances from everyone was stellar. Carrie Coon and Justin Theroux both did terrific work on many occasions over the three seasons, but they were especially good during “The Book of Nora”, as their character’s lives reconnected in the strangest and most beautiful of ways. For a show with a high-concept premise that sounded a bit limiting when I first heard about it, I was always surprised and delighted by the twists and turns The Leftovers found to take. The devil was always in the detail, and the show was always a very impressive feat of world-building. If 2% of the population really did vanish overnight, I think many of the social repercussions presented in The Leftovers could happen. Not exactly this way, as dramatic license has to be taken into account, but it all seemed so plausible to me — with the exception of Kevin’s jaunts into the ‘astral plane’, of course.

The character’s arcs, emotions, beliefs, and doubts kept ringing true, which made me believe in this extraordinary world so much. It was a haunting, beautiful, emotional, devastating ‘what if?’ drama. I’m going to really miss it.

Written By
Dan Owen
More from Dan Owen
Alice returns to where the nightmare began: The Hive in Raccoon City,...
Read More