The career of writer and director Noah Baumbach—one of America’s greatest filmmakers working today—can be split asunder. There are the films that came before The Squid and the Whale (2005), and those he’s made since. For it’s with The Squid and the Whale that we began to see the director’s style come together. His earlier films had their moments, but none feel as accomplished as this turning point. The familial drama is both intimately warm and far too close for comfort. It’s a film with no easy answers, little in the way of judgement, and zero interest in redeeming its maladjusted characters.

The story of a New York family’s inexorable disintegration draws on Baumbach’s own childhood experiences. The two boys are Walt (Jesse Eisenberg) and Frank (Owen Kline). The former’s life is a fumbling mess, as most teenagers’ lives are. Walt plagiarises Pink Floyd, messes around his far-too-good-for-him girlfriend (Halley Feiffer), and pretends to understand Kafka without having read a word of The Metamorphosis. He’s the apple that hasn’t fallen far from his father’s tree. And it’s his side he takes when the separation is in full swing. His father is Bernard (Jeff Daniels), a washed-up author who looks down on most people and most things around him in a way that’s never nasty. Instead, he’s a pitiable figure.

Frank is the younger of the brothers, and he gravitates towards his mother; recognising, even from a young age, that he’s nothing like his father. When Bernard dismisses Frank’s tennis coach, Ivan (William Baldwin), as a philistine, Frank first asks what the word means and then insists that he must be one too. Eventually, he journeys on a Travis Bickle-like descent, staring at himself shirtless in the mirror and drinking cans of beer in the basement while the rest of the family quarrel. Laura Linney plays the boys’ mother, Joan. Her wonderful performance lends the character an irresistible warmth with a stern edge—she’s the family’s centre of gravity even as it falls apart. 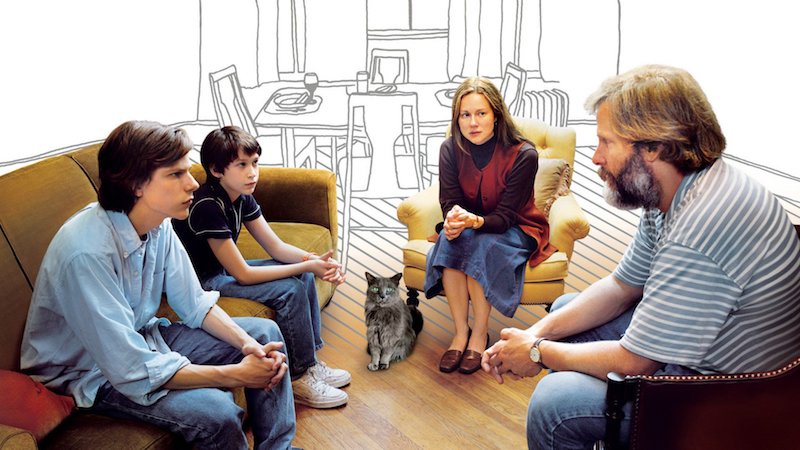 The Squid and the Whale begins with a handheld scene on an indoor tennis court, where all four members of the family are playing a game of doubles. For reasons that’ll become clear later, Frank is paired with his mother, while Walt partners with his father. As it turns out, a single game of tennis can tell you all you need to know about the dynamics of their family. Bernard is too competitive,Walt is trying to impress his father, Frank simply goes with the flow, and Joan storms off the court at the end. Without any need for exposition, Baumbach paints the perfect portrait of this family within a couple of minutes.

Daniels was only cast in the role of Bernard after dozens of other actors had turned it down. In an interview included in the extras of this Criterion Collection release, Baumbach admits to being unsure about casting the actor, having never seen him do anything similar before. He also admits to being proven wrong. In another interview, Daniels talks about putting a lot of himself and his own failings and shortcomings into the character. This results in what is easily his best performance since The Purple Rose of Cairo (1985) and the casting is just as sharp across the board.

Its ingredients naturally lend themselves to conventionality, yet the film never ventures into that territory. The climax makes it very clear that these characters, despite experiencing significant trauma, haven’t learned much at all. They don’t even know what their flaws are. Baumbach’s insistence on refusing to give them self-awareness is one of the most significant things he does. And that’s what makes them so sympathetic and amusing. They know not what they do; if they did, we most certainly would dislike them.