Twin Peaks: The Return “Part 11” wastes no time picking up from last week’s disturbing visit to the dark heart of patriarchy. Well, we all thought Miriam Sullivan (Sarah Jean Long) was dead, didn’t we? But out of the undergrowth she comes crawling, bloody and battered, and scaring the living daylights out of kids looking for a missing ball.

Just like Ronette Pulaski’s reemergence from the abandoned train car in the original series, Miriam’s escape from death has a big iron bridge in the background. The scene is another Lynchian expression of the ugliness that lies beneath the ordinary world, behind the innocent activity of children playing in the street. Her survival is hopefully an indication that her assailant, the repugnant Richard Horne, will be named, arrested, and put away for a very long time. 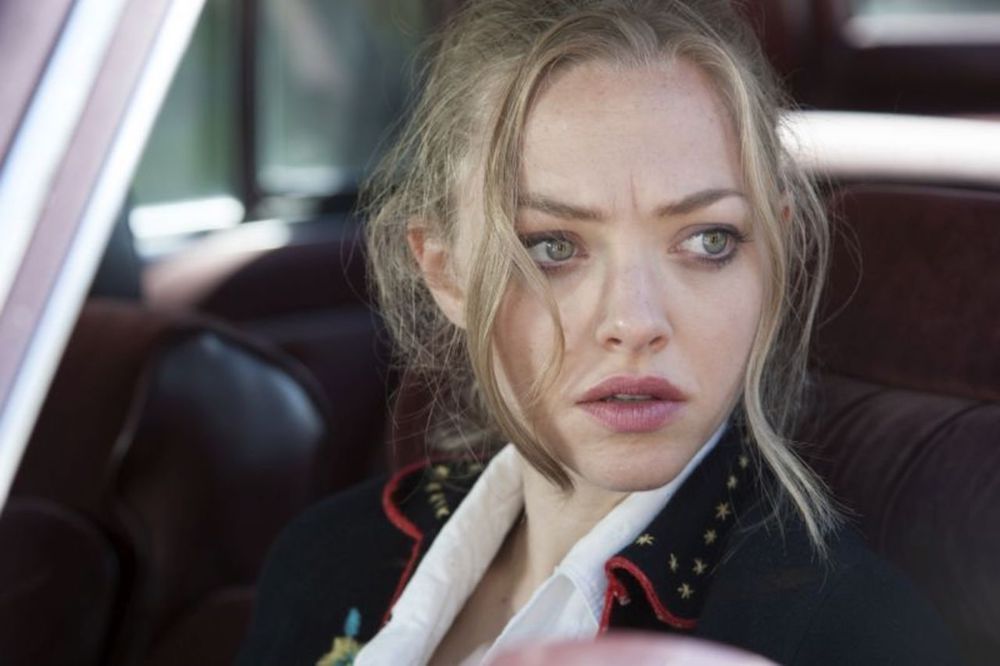 Domestic troubles dominate this week’s episode, and it’s the violent relationship between Becky (Amanda Seyfried) and Steven Burnett (Caleb Landry Jones) that achieves centre stage. But this isn’t just a parallel to the dysfunctional relationships we saw in the original series, and in particular the abusive one between Shelly (Mädchen Amick) and Leo Johnson. It’s the harbinger of something truly odd, dark, and terrifying that’s returning to the town of Twin Peaks.

All roads seem to lead there: whether it’s a glimmer of hope in the darkness unleashed upon the world; nostalgia for the past; the end game for major characters such as The Log Lady, Major Briggs, and BOB; or the gradual reawakening of Dale Cooper (Kyle Maclachlan). In my mind, I don’t even think we’ll see Dale Cooper restored. I think Dougie, through sheer accidental circumstance, will pilot the various forces at work along their appointed routes. I’d be very surprised if the finale sees Cooper miraculously returned to his former self.

We do learn that Shelly and Bobby Briggs (Dana Ashbrook) are struggling to keep their daughter Becky on the right path. For Shelly that means hurling herself bodily onto the hood of a car as an angry Becky, carrying a gun, drives off to presumably shoot her husband Steven for some further indiscretion. The silent witness to much of the distress caused by Becky has been Norma (Peggy Lipton), the owner of the Double R, who sits with her accounts and communicates much of the pain and sorrow she’s seen play out in front of her through troubled expressions alone. Shelly’s gutsy attempt to halt Becky’s progress is in direct contrast to this passive nod to the troubles around her, and it is again a lovely mix of terror and humour as Becky eventually throws Shelly off the hood and speeds off. 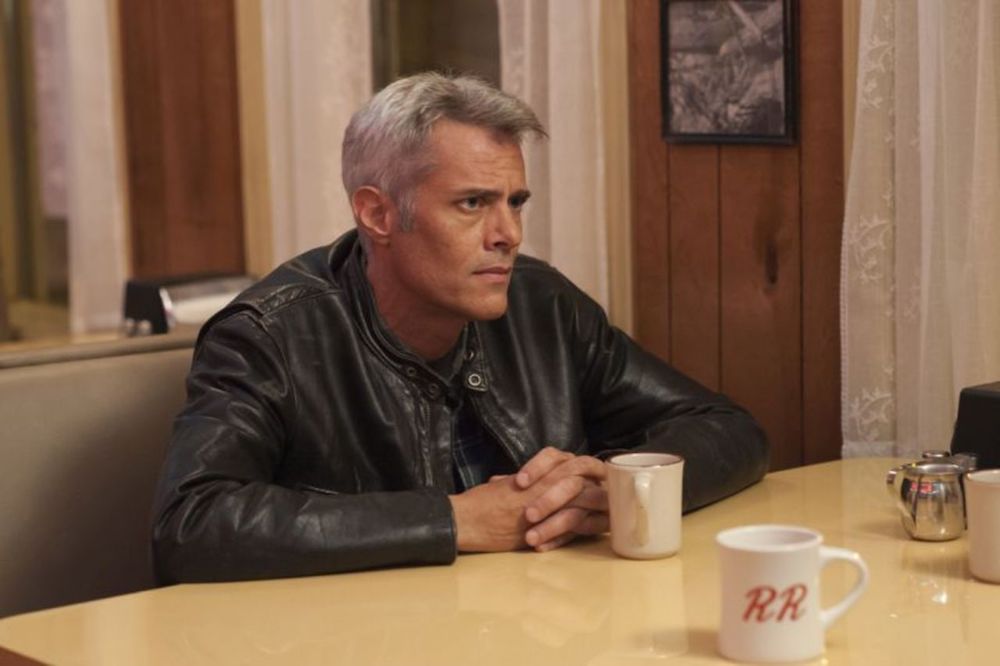 Becky tracks Steven down to an apartment, where he is, or was, in flagrante delicto with a mistress. Despite a neighbour alerting Becky that they’ve since departed, she empties a round of bullets into the door. Lynch twists this with a strange little sequence that has the camera hurtle down the corridors of the apartment block to find Steven and his mistress, credited as Gersten Hayward (Alicia Witt), hiding in a stairwell. Gersten, as Peaks fans will recall, was last seen as a little girl, dressed as a fairy princess, playing a piano in the Hayward household. Sister to Donna Hayward, Laura Palmer’s best friend, it seems Gersten is yet another innocent corrupted by the sins of adulthood.

This parallels what we later see at the Double R. Bobby and Shelly try to talk some sense into Becky, whose love for Steven seems to be clouding her judgement. She doesn’t know if she wants to divorce him, and she feels “he’s just going through a bad time.” Adultery, wife battering, and drug dealing makes that sound like a gross understatement. The telling moment is when Shelly dashes off to meet, of all people, Red (Balthazar Getty). The coin-tossing drug dealer, who could swap unpleasant stories with Blue Velvet’s Frank Booth, is Shelly’s current squeeze. It sounds awful to say it, but mother and daughter have made some particularly terrible choices with their men.

Bobby’s day ends in a surreal and disturbing fashion. After a hail of bullets hits the Double R, he discovers the shots came from a car, fired from the back seat by a little boy who found his father’s loaded gun. As Bobby tries to fathom what exactly happened by talking to the boy’s parents, another vehicle in the traffic jam continuously blasts its horn…. 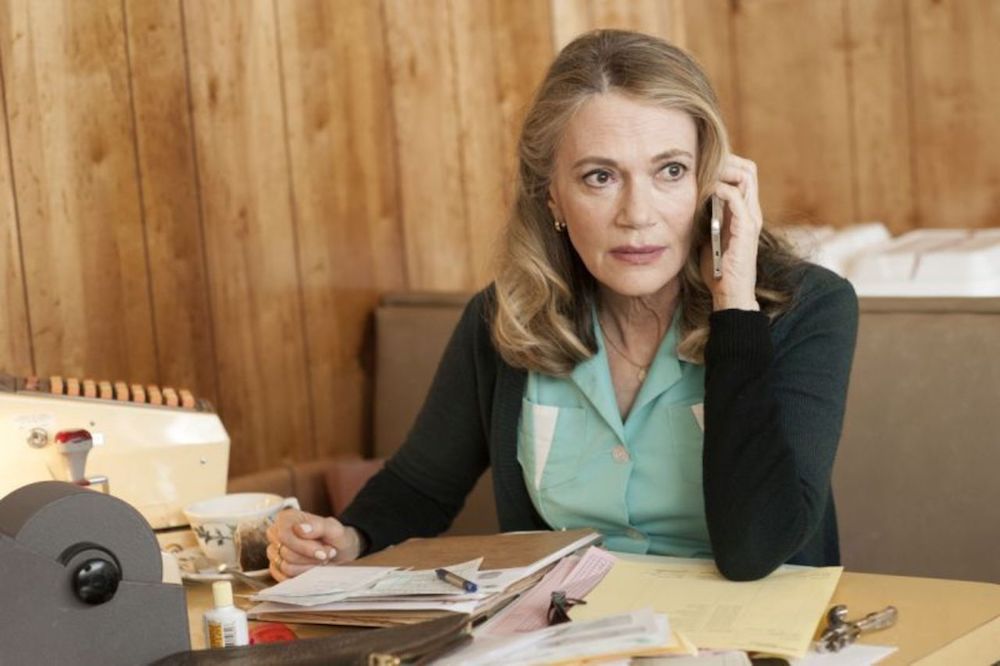 He discovers an exasperated woman (Laura Kenny) behind the wheel, desperately trying to get on the road home and to a dinner invitation. “Her uncle is joining us. She hasn’t seen him in a very long while. She’s sick!” screams the driver. Then, from the passenger side, rises a young girl (Priya Diane Niehaus), looking desperately ill and on the verge of death, throwing up green bile as she crawls into view. It is a really unsettling and nightmarish scene; a bad dream that has no rational explanation. Judging by the look on Bobby’s face as the woman driver berates him, he’s a man out of his depth and, despite his reformation, is unable get a grip on his personal life and his professional life. These are the dysfunction of the town writ large.

“What’s your location? Someone’s on the way” is repeated so many times by the Sheriff’s Department dispatcher Maggie (Jodee Thelen) that it becomes a meme for the entire episode, as the various locations tie together the strands of the story. Wherever we go in this hour, someone’s on the way, someone’s on a road to who-knows-where. Over in Buckhorn, Dakota, the team of Gordon (David Lynch), Albert (Miguel Ferrer), Tammy (Chrysta Bell), and Diane (Laura Dern) have brought William Hastings (Matthew Lillard) to the deserted location, at 2240 Sycamore, where he entered an alternate dimension and met Major Briggs. It’s worth noting Sycamore as the location’s name, as Cooper entered the Lodge through a circle of sycamore trees in Glastonbury Grove back in Twin Peaks.

Lurking in the background of a familiar-looking wooden building, similar to the convenience store we’ve seen them occupying, is one of the strange, blackened woodsman figures from the Black Lodge. Gordon, Albert, and Diane see it phase in and out of existence, and Hastings is utterly petrified by it. Certainly, Gordon and Albert know something about the nature of the intra-terrestrial forces they’re facing: “Think there’s one in there, Albert?” asks Gordon as he prepares to enter. 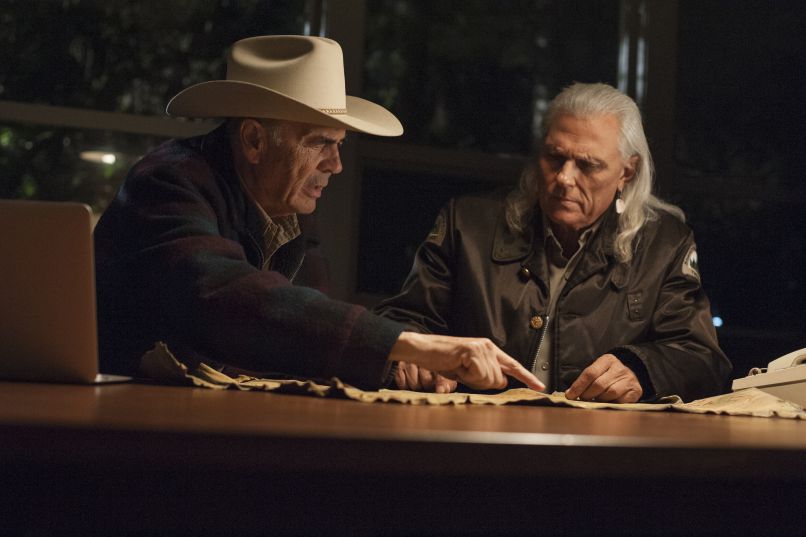 As Gordon slips through the hole in reality and witnesses a mighty vortex dragging Space and Time into it, we’re taken back to that ‘ground zero’ moment of “Part 8” and the nuclear blast that cracked open the doors to perception. The crackling of electricity, that harbinger of Lodge activity, dominates the soundtrack as Gordon peers into the vortex and briefly glimpses a group of woodsmen — “dirty, bearded men in a room” — standing together on a set of stairs.

This vision heralds Hastings demise, as Diane sees the Woodsman approach the police car and disappear into it. Detective Mackley (Brent Briscoe), sitting in front, remains unaware of the creature’s approach. Hastings head explodes much to the detective’s alarm and disgust. At the same time, Albert pulls Gordon to safety and they discover Ruth Davenport’s headless body. The coordinates, as discussed by Hastings last week, are written on her arm. Diane, whose loyalties we’re now very suspicious of, takes a very keen interest in those numbers back at the police station when Gordon and Albert discuss the evidence. Her body language and the way she hovers at the edge of scenes underlines her new status.

Back at the Sheriff’s Department in Twin Peaks, Truman (Robert Forster) and Hawk (Michael Horse) discuss an ancient Native American map and how Major Briggs’ message gives directions to Blue Pine Mountain. With a fire symbol next to it on the map, this is described as a sacred place to Hawk’s ancestors. Hawk explains that fire can have good and bad intentions and, in keeping with the idea of electrical power as a symbol of Lodge activity, is “more like modern-day electricity”.

Truman notes that there’s a corn symbol on the map, and Hawk explains it’s a sign of fertility unless the symbol is black, meaning something diseased, unnatural, or death. Surely, that’s a nod to the creamed corn garmonbozia of ‘pain and sorrow’ consumed by the spirits of the Black Lodge?

When Truman asks about the winged black circle on the map, Hawk warns him “you don’t ever wanna know about that.” This symbol appeared on the card shown to Darya (Nicole LaLiberte) by Mr. C in “Part 2” just before he murdered her. It’s a slightly corrupted version of the owl symbol that crops up on the rings worn by Black Lodge inhabitants. Indeed, the owls are definitely not what they seem. The Log Lady (Catherine E. Coulson) phones and warns Hawk “my log is afraid of fire. There’s fire where you are going.” She has some history with fire, as we know, and the log is a spiritual connection to the fiery death of her logger husband. 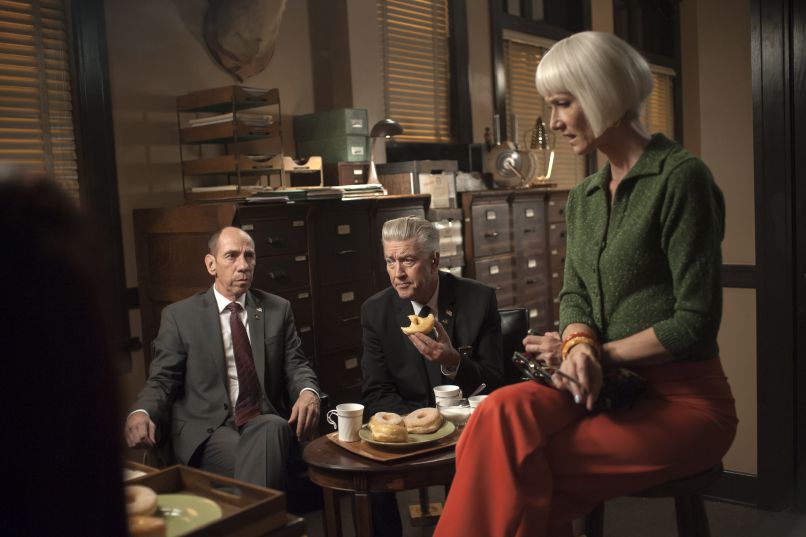 After all this distress and doom, Lynch concludes this beguiling episode with a witty volte-face. Duncan Todd’s attempt to set up Dougie as the cause of the Mitchums insurance loss, and thus expedite his demise, completely backfires. This is in part due to Dougie’s uncovering of the shady dealings being handled by Anthony Sinclair, a mix of police corruption and organised crime, and Bushnell Mullins’ (Don Murray) foresight in taking out a claim against the potential loss to cover the company.

It turns out it wasn’t fraud on the Mitchums part and they have a $30 million cheque due to them. Dougie is to deliver it in person. On his way, Dougie has a vision of one-armed Mike (Al Strobel) and picks up a cardboard box, before taking the chauffeured limo out into the desert beyond Las Vegas, to the accompaniment of Shawn Colvin’s cover of “Viva Las Vegas.”

In a skewed and rather ridiculous version of David Fincher’s Se7en (1995), we return to the desert locations of “Part 8”, Dougie is greeted not by assassins intent on killing him… but by a doubting Bradley (Jim Belushi) whose dream indicates that Dougie, like the bird that laid the golden egg, must be spared his death if the box contains what he saw in the dream. He convinces Rodney (Robert Knepper) that they must look at what’s in the box… and it contains that mythic Twin Peaks object — a delicious cherry pie . As soon as the brothers discover they have $30 million in the bank, its champagne and pie all round.

Celebrations are interrupted by a rather moving moment when the homeless woman (Linda Porter) who named Dougie “Mr. Jackpots” back in their encounter at the casino during “Part 3“, arrives at the restaurant and thanks him for changing her life. She believes he’s a very special and good person. It’s quite fitting that Angelo Badalamenti’s “Heartbreaking” tinkles on the piano as Dougie digs into more “damn good pie” and, in a very bittersweet moment, it brings something of the original Cooper back to the surface.