This second episode, “Stormborn”, was notable for how the past kept echoing around every decision being made. You can’t move for history and tradition in Westeros, at the best of times, but here it felt like the past was whispering in the ears of characters as they look towards their futures; be that with Daenerys walking in the footsteps of her father to take the Iron Throne back, Sam helping Jorah because he knew his father, Tyrion and Ellaria bitching over Oberyn Martell’s fate, or Cersei being reminded through demonstration that dragons could be killed… 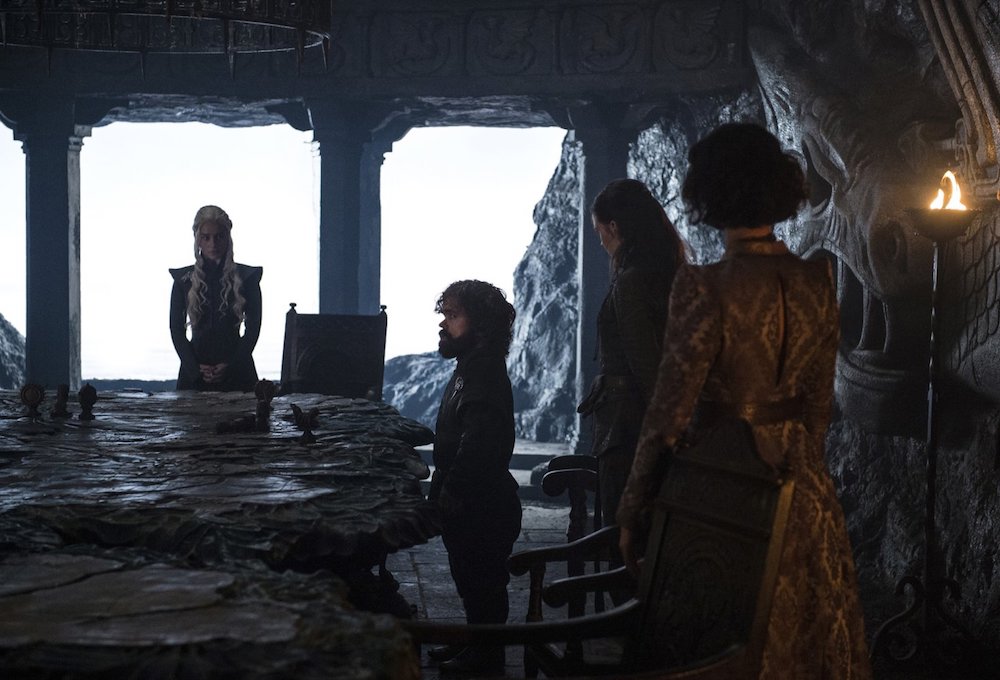 It’s a stormy night like the one Daenerys Targaryen (Emilia Clarke) was born into, and now she’s plotting to take her birthright: the Iron Throne. There are now a lot of characters assembled in this corner of Westeros, largely united in their hated of Cersei Lannister (Lena Headey) than their adoration for Dany, which she well knows. Ellaria Sand (Indira Varma) want to avenge her husband’s murder while fighting on behalf of Tyrion (Peter Dinklage), while Olenna Tyrell (Diana Rigg) lost her granddaughter thanks to the Lannister family’s machinations. Even Yara (Gemma Whelan) and Theon Greyjoy (Alfie Allen) are only really on Dany’s side because they need her assistance in defeating their crazy uncle Euron (Pilou Asbæk). But Dany understands the way of the world and is just determined to become Queen to bring peace and prosperity to the Seven Kingdoms, as naive as that may sound.

I really like the moment when Dany challenged Varys (Conleth Hill) over his loyalty, as he tends to be in service to the current royal family while secretly plotting their replacement with a better alternative. His assertion that he’s only loyal to “the people” met with his approval, and they reached an understanding. But her warning that Vary will be roasted alive by her dragons if he’s lying to her, is either a reminder that Dany’s a tough person you don’t mess with, or foreshadowing the idea she’s as ruthless as her legendarily crazy father.

Dragonstone’s war meeting generally went very well, with everyone agreeing to Tyrion’s plan of besieging King’s Landing using Westerosi soldiers, while the Unsullied and Dothraki take the Lannister’s ancestral home of Casterly Rock. It’s a plan similar to Robb Stark’s before he was killed at the Red Wedding. But after everyone leaves having agreed their roles in what comes next, Olenna advised Dany to never trust “clever men” like Tyrion, as she’s outlived many of them by ignoring their advice. One wonders if this means Dany will instead begin to favour the insight of Melisandre (Carice Van Houten), who arrived at Dragonstone offering her assistance as a Red Priestess who believes Dany and Jon Snow (Kit Harington) have a great destiny together. Mind you, listening to Melisandre is what got Stannis Baratheon killed, his daughter burned at the stake, and his armies starved and slaughtered, so let’s hope Olenna’s pearl of wisdom is misguided.

Game of Thrones can be relentlessly glum at times, so it was great to have a scene where Missandei (Nathalie Emmanuel) came to Grey Worm’s (Jacob Anderson) bed chamber, before he departs to lead the Unsullied, which turned into one of the show’s better sex scenes. The show isn’t averse to putting female nudity on screen, so Nathalie Emmanuel duly obliged the camera, but for once it didn’t seem like pointless titillation. It was instead a culmination of a sweet relationship that’s been developing awhile, and rather touching when Missandei asked to see eunuch Grey Worm’s mutilation and accepted him into bed. But I fear that Grey Worm’s worries that love has brought him weakness, because he now can’t bear to Missandei, may be foreshadowing a short-lived relationship now it’s been consummated. 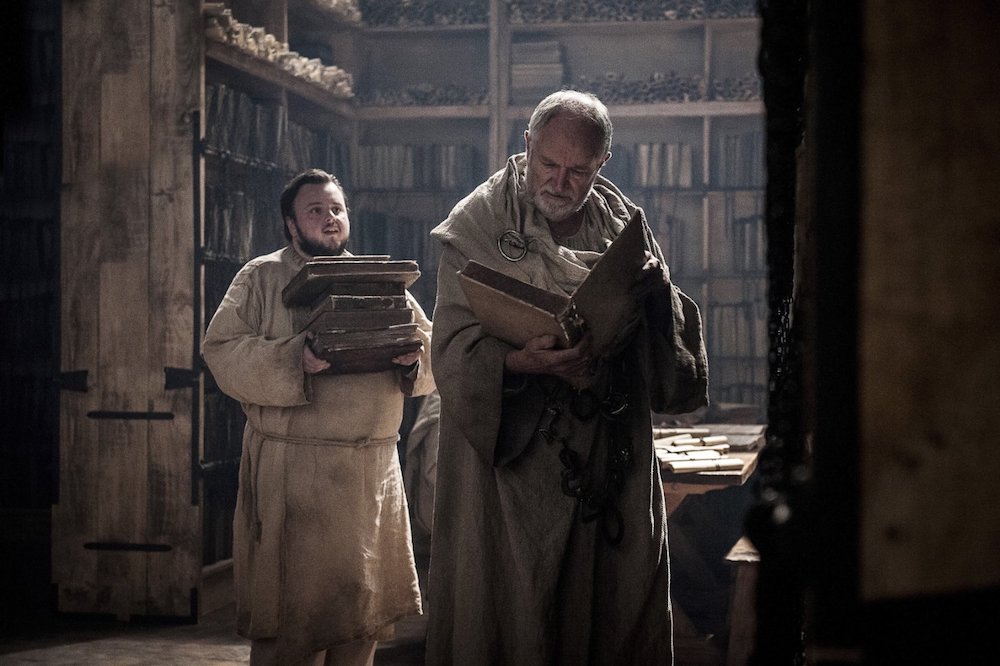 It’s a bit silly that Sam’s (John Bradley) probably going to cure Jorah Mormont’s (Iain Glen) greyscale, despite Archmaester Ebrose (Jim Broadbent) saying Jorah is beyond help and will go insane within six months before being exiled. I know Sam’s a character whom everyone underestimates, but it’s stretching credibility that a newcomer to Oldtown is able to remedy greyscale — an affliction the maesters of Westeros haven’t found a reliable cure for in centuries.

Maybe George R.R Martin’s novels (which haven’t reached this part of the story yet) will do a better job making it seem plausible that Sam’s a cut above the other maesters somehow, but for someone who’s mainly spent his time in Oldtown emptying bedpans it seems a bit fanciful. Still, I’m confident it’ll work and Jorah will re-enter the story to fight alongside his beloved Daenerys soon enough. The sequence where Sam came to Jora’s room after hours, to slice away his top layer of greyscale without anaesthetic, was truly horrifying. The moment was sold brilliantly by Glen’s smothered screams and wide eyes. And kudos for the deceiving cut to the next scene, with Sam’s scalpel about to touch Jorah’s flesh, before suddenly dipping into a gooey pie. 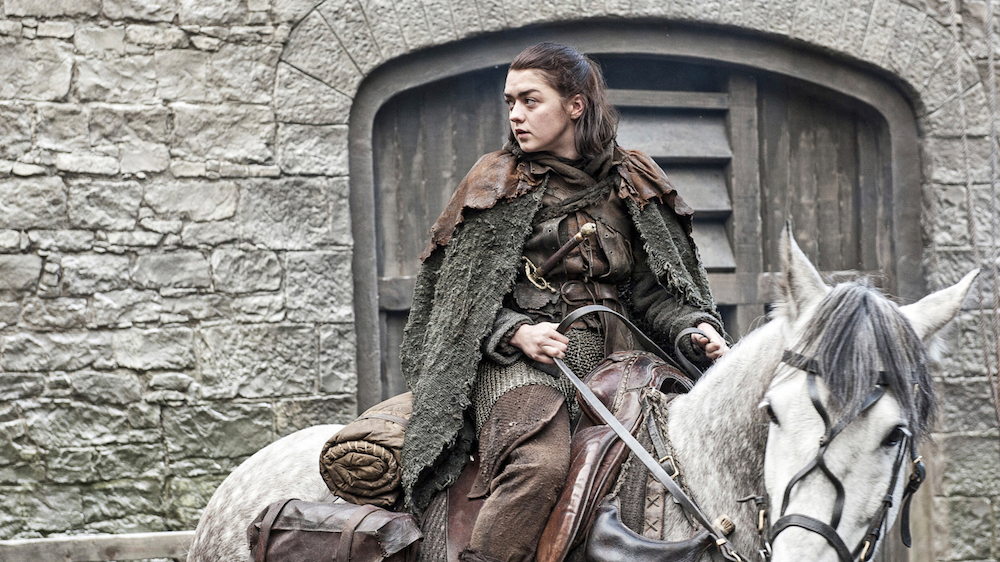 The pie in question was being served to Arya Stark (Maisie Williams) by her old friend Hot Pie (Ben Hawkey), in a scene that mainly served to make her realise what’s happened in the north. Winterfell has been retaken by her half-brother Jon, who defeated the Bolton’s in ‘The Battle of the Bastards’, so she’s heading there for a family reunion. Along the way, Arya found herself surrounded by wolves, led by her old direwolf Nymeria (whom you might remember protected Arya by biting Joffrey in season 1, then escaped execution by Cersei). Nymeria recognised Arya enough not to go through with their attack, but not quite enough to abandon her new life in the wild and travel north with Arya. 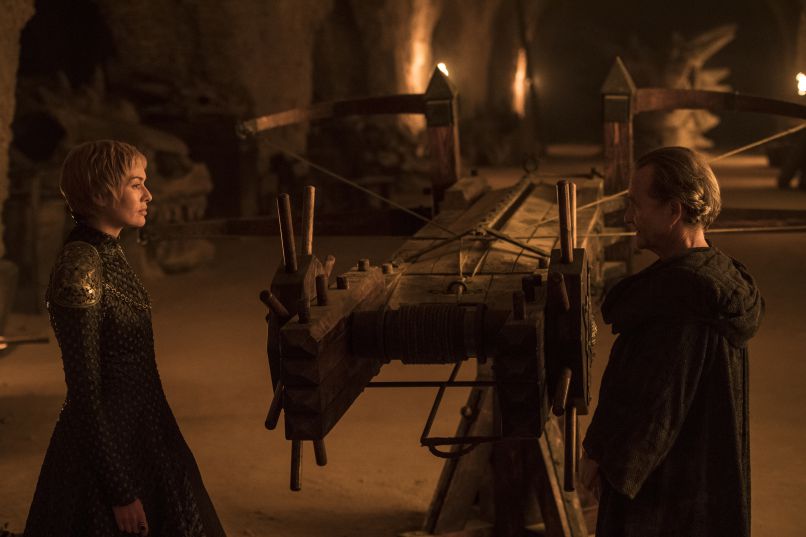 I loved the scene where Queen Cersei was using propaganda to turn the House of Tyrell’s bannermen to her cause, united against Daenerys. She’s painting her nemesis as a danger, worse than the “Mad King”, with fire-breathing dragons poised to raze people’s homes to the ground, and an invading foreign army at her command. It’s clever stuff, for a society where news is only delivered to the upper-classes by raven, and “truth” is always very slippery.

It’s easy to see why tales of Daenerys Targaryen could be twisted to suit your own agenda, too. Jaime (Nikolaj Coster-Waldau) is perhaps thinking more pragmatically, as he recruits Randyll Tarly (James Faulkner), the bullish father of Sam, to lead an army against the Tyrell’s. I’m glad his character’s suddenly got a bigger role on the show, as he made a good impression as Sam’s ghastly alpha male father last season. Slightly more interesting, Qyburn (Anton Lester) has built a giant ballista, which has the power to penetrate dragon skulls with a large spear, bringing to mind The Hobbit. It would be almost unthinkable all three of Dany’s dragons are going to survive till the end of this series, so I’m predicting the ballista will manage to fell at least one winged opponent. 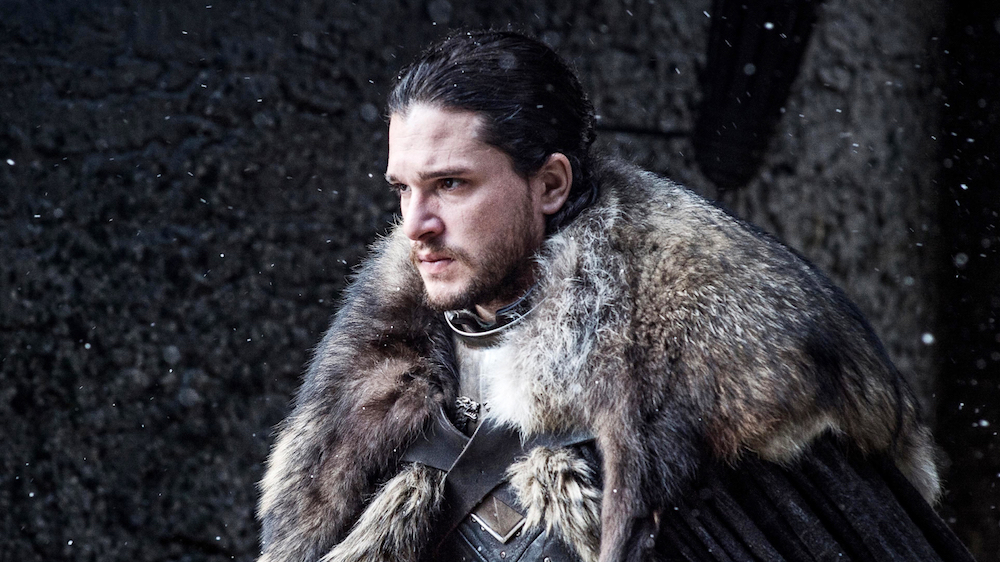 Some things about season 7 feel very predictable, which tends to happen when a show gets dissected by thousands of fans for months on end. So it’s pretty much a certainty that Jon Snow is going to meet up with Daenerys, to fulfil a prophecy or not. Here, he received a message by raven from Dragonstone summoning him there to “bend the knee” to his Queen. He only believes it’s not a trap because the message was written by Tyrion, whom he trusts, but the other Lords of the North aren’t convinced the daughter of the “Mad King” isn’t going to repeat an underhanded trick her father used on a Stark once.

Sansa (Sophie Turner) also believes her brother’s rightful place is in Winterfell, but Jon’s first-hand experience with the fearsome White Walkers and their army appears to have made his mind up for him. It’s definitely a risk, but one worth taking. They need allies with armies to defeat the undead hordes. Plus, having also received word from Sam in Oldtown, he now knows that Dragonstone’s situated on a mountain of dragonglass that can defeat the White Walkers. An alliance seems inevitable. I just wonder if things will subvert expectations in some ways, perhaps because Jon won’t be too happy to see Melisandre at Dragonstone? And if Davos (Liam Cunningham) is attending, he’s sworn to kill her. Will Dany be more under her influence by the time her Winterfell visitors arrive? It’ll also be interested to see how Dany reacts to Jon’s situation and request for help, as her focus has been focused on the Iron Throne in the south, not protecting the Wall from zombies. 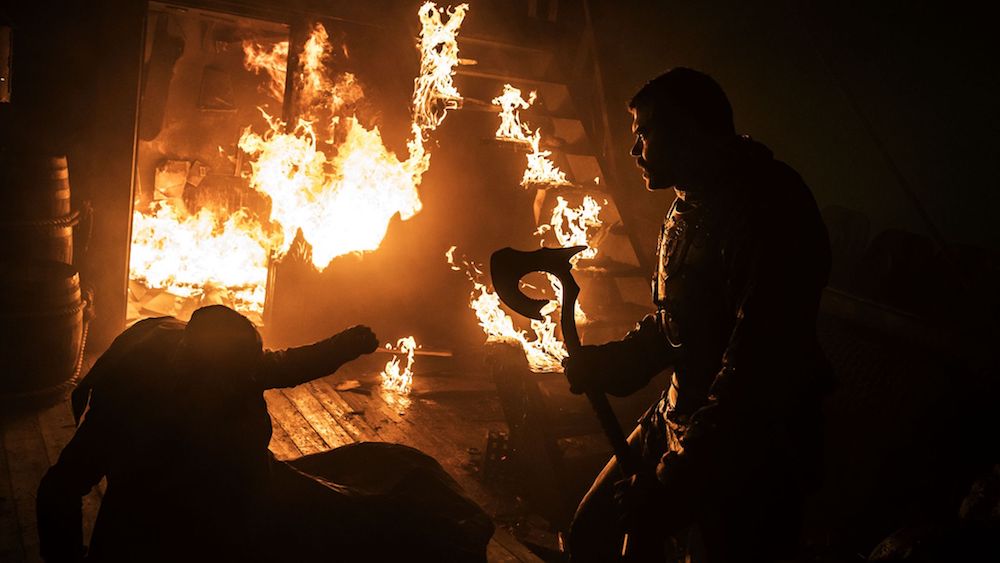 As there aren’t as many episodes this year, one assumes HBO’s budget for the normal 10 episodes is simply being spread across fewer hours. I could be wrong, but it would explain why we have a big action set-piece in episode 2, when such things are typically held back until much later.

Euron’s Iron Fleet attack on Yara’s navy certainly came out of the blue, and was marvellously put together by director Mark Mylod. The Iron Fleet felt like enormous black beasts looming out of the darkness, and the attack was swift, brutal, and disorientating. It also saw the demise of two ‘Sand Snakes’, desperately trying to protect their mother Ellaria, who was later captured along with her only surviving daughter Tyene (Rosabell Laurenti Sellers).

The episode ended on a downer for Theon Greyjoy, who couldn’t handle seeing his insane uncle Euron holding a blade to his sister’s neck, in a moment where the memories of his torture took away his resolve and he chose the coward’s way out by diving overboard. But it’s hard to see what else he could have accomplished when faced with that situation, so I don’t blame him. One presumes Ellaria will be Euron’s promised gift to Cersei (the woman who poisoned her daughter), to prove he’s serious about forming an alliance through marriage against Daenerys and her other allies. Is there a chance Theon could swim to shore, and get back to King’s Landing in time to save his sister from likely public execution?

Whatever happens, Tyrion’s plan is effectively in ruins already, as one presumes Ellaria will spill the beans about what Daenerys hopes to achieve at King’s Landing and Casterly Rock. Maybe this is where Jon Snow comes in, coming up with a better plan in exchange for mining the dragonglass to defeating the White Walkers in the north before converging on the Iron Throne?