Readers of Diana Gabaldon’s Outlander novels were in for a bit of a surprise this week with the broadcast of “Through A Glass, Darkly”, season 2’s opener of Starz’s adaptation of the historical fantasy drama. In Gabaldon’s second novel, Dragonfly in Amber, nurse Claire Randall (Caitriona Balfe)—holidaying in the Scotland of 1945 and whisked away to the Jacobite uprising of 1743 through the standing stones of Craigh na Dun—reveals she returned to her own time and has been living with her husband Frank Randall (Tobias Menzies) until 1968. Not wishing to spoil the enjoyment for potential readers, the opening of the book does initiate major plot strands that TV producer Ronald D. Moore clearly wanted to tackle with a simpler approach.

Moore recently voiced concerns about adapting Dragonfly in Amber’s complex nature for television and indicated his determination to make Frank a more sympathetic character. “I liked the beginning of the book, but I thought it was too much to give to the TV audience all at once,” Moore suggested to Yahoo! TV. Apparently, the TV series will eventually circle back to 1968. Bearing in mind Frank Randall’s divisive reputation with fans of the books, who are far keener on the romance between Claire and her other husband Jamie Fraser (Sam Heughan), he wanted to explore the reparations to the Randall’s marriage and of Frank felt “a responsibility to make sure that he’s worthy of my heroine.” With “Through A Glass, Darkly”, I think he partly succeeds. 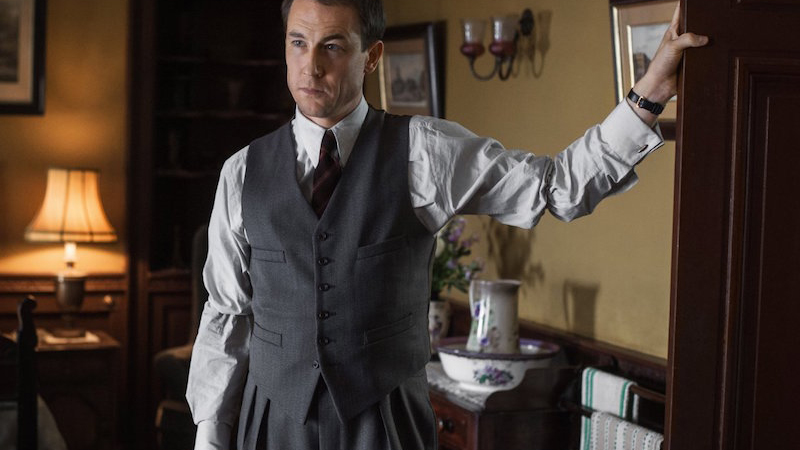 The episode offers a flashforward to 1948, rather than 1968, and restructures the perspective of the story from Frank’s point of view after Claire’s traumatic return to the 20th-century. Moore allows “Through A Glass, Darkly” to focus on Frank’s reaction to Claire’s sudden return. Having given up all hope of ever seeing her again, he became the subject of malicious gossip that Claire had departed with another man. We’re presented with a man still desperately in love with his missing wife but fearful of the reputation he might have with his peers, as the press start to intrude with stories that his spouse was possibly ‘Kidnapped By the Fairies?’ Ironically, the headlines are closer to the supernatural causes of Claire’s disappearance than they think.

It’s a tense, cathartic two-hander between Tobias Menzies and Caitriona Balfe; exploring the anger, resentment and regret generated by Claire’s fantastic confession about her life in 18th-century Scotland, eventual marriage to Jamie Fraser, and later bearing his child. These scenes run the gamut of emotions: the peaks and troughs of joy and despair when Frank discovers that Claire’s pregnant, but that the child isn’t his. Menzies captures the man’s devastation perfectly. Several ghosts haunt the relationship, with one caught in flashback when Claire recoils from a husband who resembles his brutish ancestor ‘Black Jack’ Randall, the source of so much pain and degradation for both Jamie and Claire. Fortunately, Frank takes his frustrations and anger out on Reverend Wakefield’s potting shed.

As Claire recovers from her journey, we learn that, in a desperate bid to save the life of her unborn child, she unwillingly abandoned her 18th-century husband, Jamie Fraser, on the battlefield at Culloden. Hence, we see her desperately digging through Reverend Wakefield’s collection of history books for any indication Jamie survived this great battle. This is elegantly paralleled with Claire’s surroundings: as she delves back into history, the noise of the 20th-century, on the brink of the Cold War, is all around her and seems utterly alien now. And she doesn’t spare the blushes of the insightful housekeeper and female confessor Mrs Graham (Tracey Wakefield) when she declares “there’s always another fucking war.” 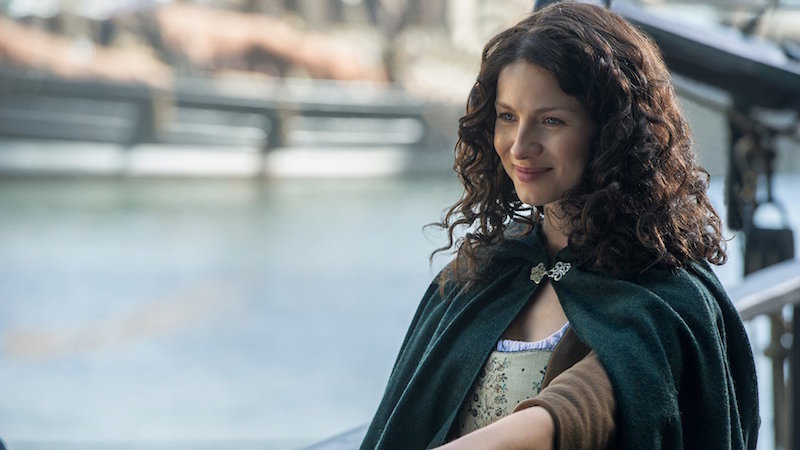 In recounting her experiences, Claire is calm and considered, despite her despair at losing Jamie; whereas we get the impression that Frank, delighted to have her back, is impatient to move on. He accepts her strange story and immediately looks to the future, to an academic life in Boston. He wants to leave the press speculation behind and, as he puts it in an unfortunate but blackly comic turn of phrase, is worried they’ll keep flogging the story to death. Claire’s reprimand is another reminder of Jamie Fraser’s vital physicality, his presence felt even though he is long gone. Perhaps this is why Frank burns Claire’s 18th-century clothes without compunction, despite their enormous value. He is exorcising the ghost haunting their marriage.

There are some acute observations about parenthood and heredity, particularly when Frank turns to his own confessor Reverend Wakefield (James Fleet). He reveals that he’s sterile and that he and Claire therefore couldn’t have children. Wakefield tries to assuage his anger and disappointment with his own example, having adopted his great-nephew Roger after the boy’s parents died. For Gabaldon’s readers, Roger’s presence is a rewarding nod to the adventures to come as we begin to trace the ancient cause of the present day distress; why Claire and Jamie failed in their mission and the question of whether Jamie survived the horrific events of Culloden.

After the episode’s emotionally draining reckoning in the Inverness of 1948, and the salvaging of Claire’s marriage to Frank, she recalls the events that continue directly from last season’s finale. Then, she and Jamie were heading to France in a vainglorious bid to scupper the Jacobite uprising and prevent the catastrophic battle of Culloden in 1746. Moore’s decision to restructure the original opening also means we get to flashback that much sooner to Jamie and Claire’s arrival at Le Havre. This is done in an visually effective way as Claire steps off her plane in New York, with a dazzling horizon of skyscrapers, and goes to clasp Frank’s helping hand only to step once more into Jamie’s arms from their docked ship at the harbour-side. Claire Randall once again becomes Claire Fraser. 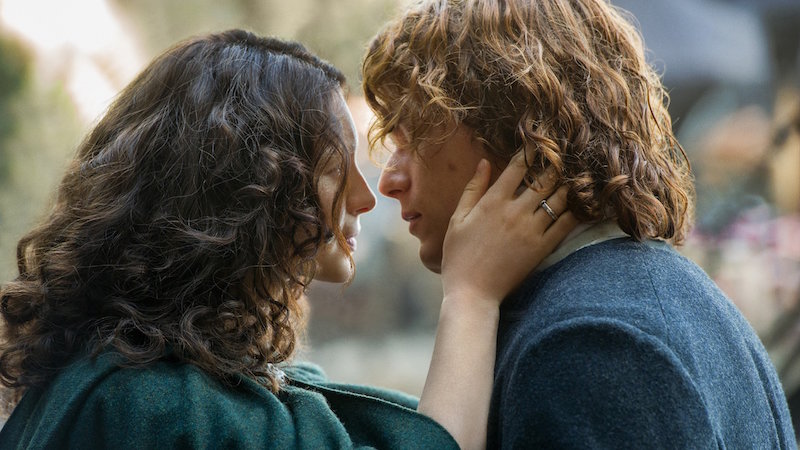 In a France that “reeks of frogs” according to the culturally ignorant Murtagh (Duncan Lacroix, providing some much needed laughs), Jamie seeks out his wine merchant cousin Jared (Robert Cavanah) in the hope of persuading him that their politics cleave to the Jacobite dogma and they can begin their task of disassembling the movement before the inevitable tragedy of Culloden. Murtagh is a reminder of the clan world they’ve temporarily left behind, but there is a brief moment when Jamie confesses to Claire that he can still feel the presence of that other ghost, ‘Black Jack’ Randall. The traumas of the assault at Wentworth are offered up as another spectre, a visitation on the Fraser’s marriage.

However, matters do not get off to a good start when Claire angers the local businessman Comte St. Germain (Stanley Weber, making an immediate impact). After she identifies a smallpox outbreak on board one of his cargo ships, he’s forced to watch his ship and cargo go up in flames in the harbour. It’s a minor quibble, but the scenes in Le Havre feature French dialogue appropriately subtitled yet it looks like the series is going to intermittently drop in and out of French and English, rather like the reconfigured version of the “Skye Boat Song” that plays over the titles. Granted, this saves us from performers mugging away in English with terrible French accents. Better still, just consistently have everyone speak French and subtitle all the dialogue? At the moment it promises to be neither one thing nor the other.

“Thorough A Glass, Darkly” is a solid opening episode, providing an opportunity to explore the emotional fallout of Claire’s return to 1948 through very strong performances from Menzies and Balfe. The final act set in France effectively reintroduces us to Jamie and Claire’s mission, even though we already know it’s doomed to fail. As ever, the production values are very high and praise should also be reserved for Stephen McNutt’s luminous cinematography that sensitively maps the parallel periods of history with their individual colour palettes, reflecting the moods and emotions within two distinct marriages.

DOCTOR WHO – ‘Legend of the Sea Devils’