It’s easy to condemn Disney for adapting its animations into live-action, as it seems like a creatively bankrupt endeavour, but the success of 2015’s Cinderella provided reason to hope it’s less cynical than it seems. Thankfully, Jon Favreau’s The Jungle Book continues what could be a successful trend from the studio, as his film finds the heart and emotion of the original children’s favourite, then blends it with amazing visuals and an energetic vibe. It makes for a hugely enjoyable 106-minute adventure in the jungle.

You know the story, I’m sure. This is a retelling of Disney’s 1967 original, rather than a fresh adaptation of Rudyard Kipling’s original stories from the 1890s. Mowgli (Neel Sethi) has been raised in the jungle by a family of wolves, after being brought to their pack by panther Bagheera (Ben Kingsley). When feared and ruthless tiger Shere Khan (Idris Elba) learns of Mowgli’s existence, he insists the boy cub leave the jungle, assuming all humans grow up to become fire-starting men that cause nothing but pain and misery—something Khan’s witnessed first-hand. Leaving the wolf pack behind, Mowgli encounters all manner of other creatures, including laid-back bear Baloo (Bill Murray), hypnotic python Kaa (Scarlett Johansson), and powerful ape King Louie (Christopher Walken).

While many will expect something trendily darker than the original, it should be noted that The Jungle Book is still very family-friendly. It even features a few beloved songs from the ’60s classic. What’s really special here, though, is the way this film looks. The visual style and colour palette is astonishing, especially when you consider it was almost entirely shot on L.A sound stages, with young Sethi almost the only flesh-and-blood person on-set. If Dawn of the Planet of the Apes convinced you CGI apes can be fully-developed characters in their own right, this goes one step further with its colourful menagerie of beasts, all painstakingly rendered and perfectly voiced by a talented cast. 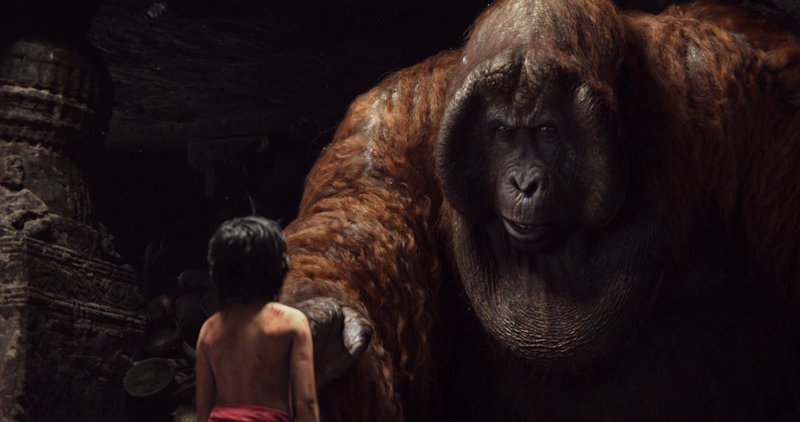 Also, even if The Jungle Book doesn’t feel like something that needed the extra dimension of 3D, you can thankfully tell that this hasn’t been post-converted. As you watch Mowgli swing through trees and sprint through his environment, you’ll be transfixed and entirely convinced. There’s terrific use of colour, too—like the contrast of red and orange on black for powerful sequences involving fire, or making use of colour splashes to convey joy, and intense emerald hues to increase our tension and fear.

As mentioned, the vocal casting is excellent. Even if you have fond memories of the original Disney voices, you’re not going to be disappointed by the new actors slipping seamlessly into their roles. Significant praise has to go to Sethi, first of all, making his leading role debut and doing so with tremendous confidence and charisma. From the very first moment you see the young actor, he is Mowgli. His emotional range is remarkable for such a young actor, and he captures a sense of fear and trepidation in his character while also showing that Mowgli has courage, an adventurous spirit, and great creativity.

Johansson’s Kaa doesn’t appear much, but is incredibly sinister whenever she does, and Kingsley brings steadfast emotional depth to Bagheera. One of the best vocal performances is also of the most subtle: Lupita Nyong’o as Mowgli’s wolf mother Raksha. She has a resonant and important part to play, and Nyong’o contributes to making her arc so profound and moving. Murray is unsurprisingly brilliant as Baloo (and, yes, he sings “The Bear Necessities” just wonderfully), while Walken delivers the goods as ‘king of the swingers’ Louie. Of course, one of the most important vocal roles was always going to be Elba’s as Shere Khan, and he knocks it out of the park. His villain’s cruel ferocity is given layers both by the script and Elba’s portrayal, making for a consistently intimidating and fearsome presence. 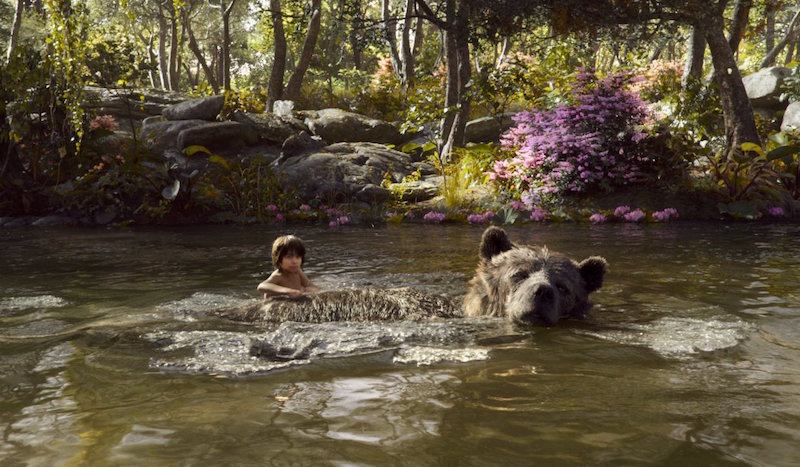 Thematically, Khan’s inability to see Mowgli for the child that he is, and his strongly held belief that he’ll grow to be dangerous, is the backbone of this story and its look at the damage prejudice causes. When fire does begin to have a presence in the story, it’s easy to see how the tiger’s fear of it is a strong contributing factor for why it appears. Such deeply held preconceptions cause enormous amounts of damage, for while Shere Khan believes his concern about Mowgli is him protecting the jungle, he isn’t able to see how he himself is tearing it apart, and how his pledge to replace “reason” with “fear” is just as deadly as anything humans could create.

The Jungle Book also shows development through the actions of its characters, revealing how Mowgli’s various maternal and paternal figures have passed on traits to him—as he has the kindheartedness of Raksha, the determination of Bagheera and the easygoing attitude of Baloo. In turn, all these characteristics rub off onto the other characters, as Mowgli both learns and teaches the animals some life lessons and passes on skills he’s learned during this journey.

While it might occasionally seem quite dark (it’s certainly not one for very young kids), at its core The Jungle Book is an optimistic story. A fantastically immersive film, this is much more than just a hyperreal animation showreel, but a very special reimagining of a Disney classic. It brings out the spirit of the original, while adding a visual splendour of its own. A transcendent cinematic experience, The Jungle Book will make you feel wonder and joy, plus a stirring call to adventure.