I don’t know whether I’m suffering from full-blown Stockholm system, or whether Vinyl has improved tremendously over the course of its run, but I genuinely enjoyed the two latest episodes. “E.A.B” and “Rock and Roll Queen” were a strong mix of the better parts of the music plot lines (the fact that American Century isn’t really very good; Andie’s competence and ability to take no prisoners), the women’s stories (which have largely been more interesting than the men’s), and an admirable focus on the horrible reality of Richie’s (Bobby Cannavale) addiction.

Even the gangster plotl ine didn’t irritate me as much—after all, we all know what it’s like to have a colleague we can’t stand and have history with foisted upon us, and it was pretty entertaining watching Richie struggle to deal with Maury Gold (Paul Ben-Victor). Most of all though, Vinyl just took a breath, slowed down, and allowed us to spend some time with these people. For the first half of the season, HBO’s latest drama has felt like being repeatedly beaten about the head with a baseball bat, at the same time as someone shouts ‘look how cool I am, damn it I’m really, really cool’. It was tiring and tiresome, and just seeing it on-screen, made me want to close my eyes in the hope it would vanish.

Sadly for American Century, they are no longer living in a rich man’s world now Richie’s managed to screw them over twice: once by refusing to sell the company, and then by gambling away the private plane money. The first situation led them to get into bed with the devil—a.k.a mafia boss Corrado Galasso (Armen Garro)—a partnership made in hell that they’re all surely going to regret. The second issue came to an ugly head when poor, broken Zak (Ray Romano) finally realised exactly what happened in Vegas and quite rightly decided it shouldn’t stay there. Will a beating from his former best friend make Richie come to his senses? His tired confession to Devon suggested that it might but at the same time one of this show’s real strengths has been it’s bleak and clear-eyed portrayal of addiction, it would be a shame if they bottled it now by having Richie miraculously start doing right by everyone. 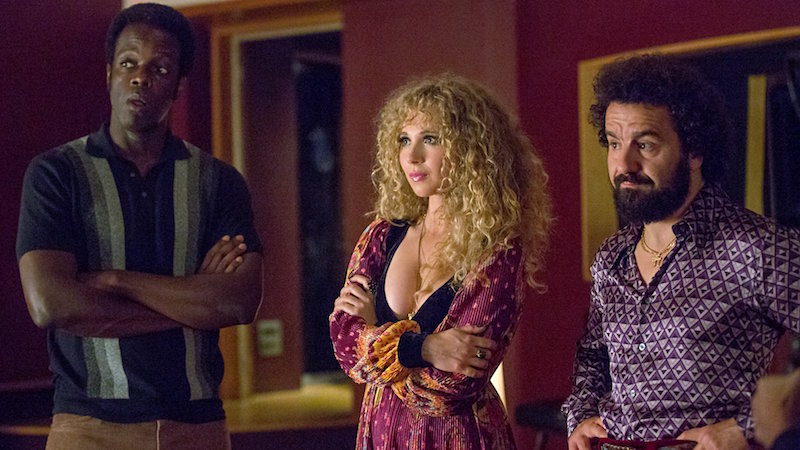 Free as a bird

It would also be a shame if Devon took Richie back. While her life in the Chelsea hotel might not be all wine and roses, there’s the sense that she’s really begun to remember who she was before her husband stranded her in her empty Greenwich mansion with the kids. The scene with her, Ingrid (Birgitte Hjort Sørensen) and John Lennon (Stephen Sullivan) in Max’s Kansas City was witty and to the point, allowing us to see the charm and style that Richie once fell in love with, while her relationship with the photographer was interesting for the way in which it contrasted with that with Richie. Devon is very much in control here.

That, however, is more than cam be said for most of the other women on the show. Poor CeCe (Susan Heyward) is pregnant with Hannibal’s (Daniel J. Watts) child, and received only some hurriedly given bank notes from Richie for her pains—he should feel guilty, as he practically ordered her to sleep with the star and now her life is ruined. Jamie’s situation seemed equally desperate, as her mother paid her aunt to kick her out of the home, but little Miss King is a natural born survivor and quickly wormed her way further into The Nasty Bits’ lives. One of the most interesting things about Jamie is just how off-kilter she is. I’ve always had the sense that she’s turned on by violence, rage, and creating trouble, and the way in which she instantly started playing Kit and Alex (Val Emmich) against each other did nothing to change my mind. No wonder Andie despairs however. Most of the men in American Century are talentless idiots, and all the women seem intent on screwing the talent. It’s not easy being the only together member of staff—and even harder when everyone thinks you got your job just because you once had an affair with the boss.

So much to choose from over the course of two episodes, but I’m going with Simon and Garfunkel’s mournful “Blues Run the Game”. which perfectly captured Richie’s growing tiredness at himself and his lies.

Just because they’re your first act you don’t have to fuck ’em.

—Andie Zito lays down the law.

So what did you think? Has Vinyl got better, or am I going mad? Will anything be resolved in Sunday’s finale? Or has this all been a load of sound and fury signifying nothing? As ever feel free to have your say below…