Attack on Titan isn’t for the faint-hearted. The enormously popular anime can be hard to recommend to the uninitiated, on account of just how gory, bleak, and unrelenting it is. Watching this series is a scary and often uncomfortable experience. For those who know what it’s all about, however, this is also one of the single most gripping TV shows around. It’s highly addictive, and once it has its hooks in you… you’ll be desperate for more.

The series is set in a world where all of mankind has been forced to retreat to a life within cities protected by huge walls built to keep out Titans, giant humanoid creatures who eat people seemingly without reason. Mankind tries to fight back against them, but it’s a desperate struggle. Titans are difficult to kill and only have a single goal: to eat humans. The first season began with the breach of the wall by the Colossal Titan, and saw the destruction of the hometown of our heroes, Eren Jaeger (Yūki Kaji/Bryce Papenbrook), his adopted sister Mikasa Ackermann (Yui Ishikawa/Trina Nishimura), and their friend Armin Arlelt (Marina Inoue/Josh Grelle). 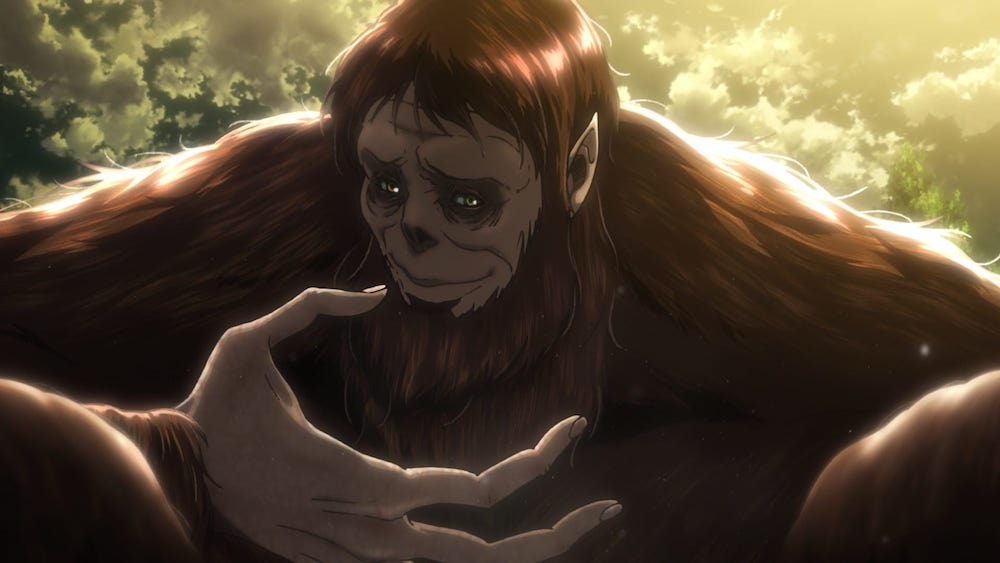 In the aftermath of the attack, the three joined the Scout Regiment to fight back against the Titans. Hotheaded Eren vows to kill them all and avenge the brutal killing of his mother, while the calm and collected Mikasa protects him whenever he rushes into danger. Armin is the brains of the trio, constantly thinking two moves ahead to keep his friends safe. The first season is packed with shocking twists, including revelations about certain humans who have the ability to transform into Titans. The shorter second season (reduced to 12 episodes from 25) continues that trend with unpredictable developments and a breakneck pace.

The season kicks off with Eren and the main characters recovering from the fighting that ended the first. We begin by following many of the secondary characters as they discover that Titans are now unexplainably inside the walls when they weren’t last season. This group doesn’t have enough time to put on the gear that allows them to fight back against the tall humanoids so they have to get on horses and scatter, trying to save nearby villages and find out where the wall could’ve possibly been breached. It’s a pacy and riveting start, and that tension is sustained for the entirety of a season that’s built around three key battles. 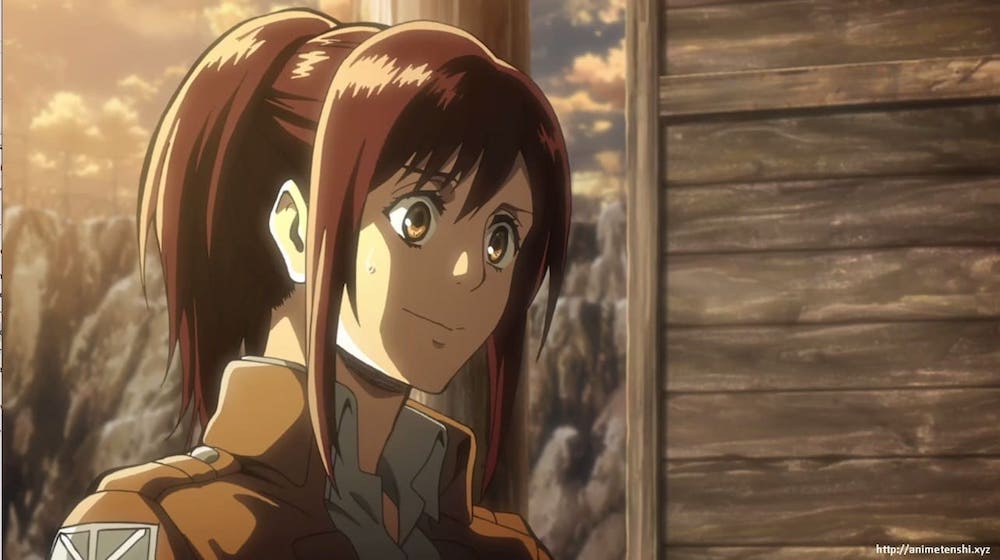 Visually, Attack on Titan is notable for its highly kinetic style. The action is fast and rhythmic, with the soundtrack and realistic sound effects playing an important role in the experience. The Titans are unnerving in their dead-eyed appearance and their presence is always bone-chilling. There’s an element of the Uncanny Valley theory when it comes to what makes the monstrous Titans so disturbing. They nearly look human but their smiles are just that little bit too wide, their teeth too numerous, and their eyes too empty. It makes watching them highly unnerving.

The fear that Attack on Titan is able to bring to the viewing audience is palpable. It makes you feel the desperation of humanity being stuck in a battle against of horde of senseless flesh-eating monsters, and this is always heightened by how frequently soldiers end up being eaten alive in the most undignified ways. This show has a bleakness in its outlook that can match the likes of Game of Thrones, with central characters often dispatched or mutilated, while the large cast of secondary characters is rapidly eaten through each time conflict arises. 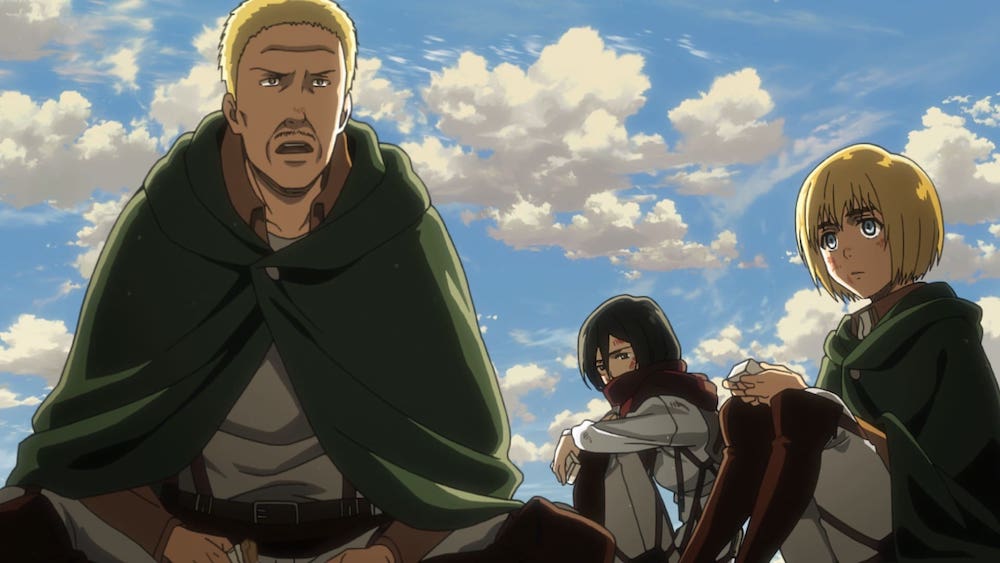 Much of season 2 is all about how much story there is outside of the adventures of Eren, Mikasa, and Armin. We get to see a lot of revelations about characters who were mainly on the sidelines in the first season, particularly in how the duo of Ymir (Saki Fujita/Elizabeth Maxwell) and Christa (Shiori Mikami/Bryn Apprill) sit at the heart of one of the most compelling stories, and how the events of this season make the seemingly fairly nondescript characters of Reiner (Yoshimasa Hosoya/Robert McCollum) and Bertholdt (Tomohisa Hashizume/David Matranga) into fascinating figures we genuinely want to know more about. Watching Attack on Titan can often feel like looking at a very small part of a large puzzle, though, and the second season still leaves you with the feeling that there’s a massive amount we don’t know.

The season concludes with a lot of information being delivered to set up the events of next year. It’s all tantalising stuff. There are hints about the origins and the truth about Titans, mysteries involving the main characters, and repositioning of pieces on the chess board to establish new conflicts. And, throughout, the hairy and seemingly intelligent Beast Titan lurks on the fringes of the show as a villain yet to fully unleash his power. While we get a few hints as the season concludes about what the future may hold, as is often the case with the show, there’s really only so much you can guess about what’s next. 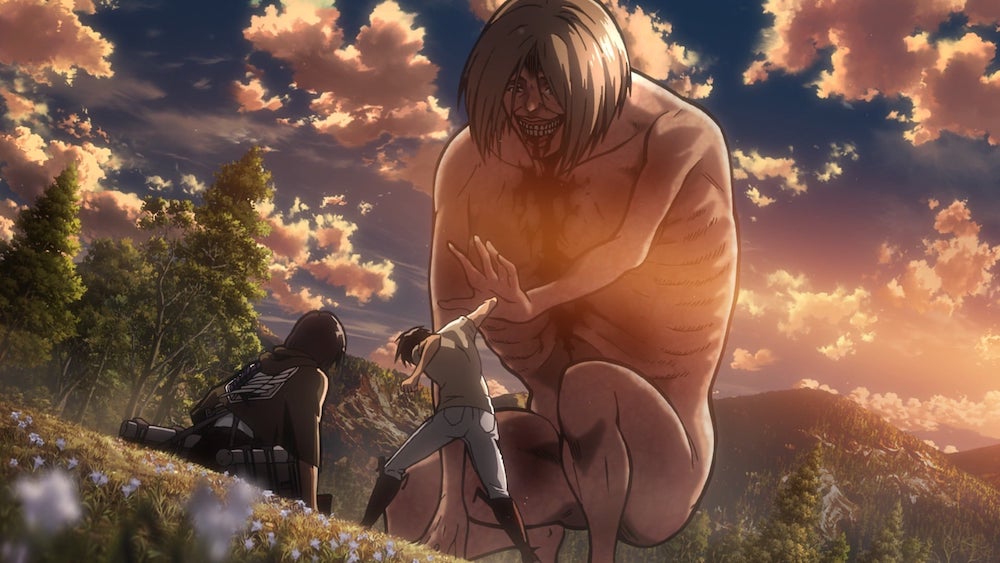 While the second season may be shorter than the first, it continues to deliver in spades. Attack on Titan is a gripping and rewarding experience, but it’s definitely not one for the squeamish. This anime is unspeakably gory and violent, but also an example of meticulous and compelling storytelling. Where season 2 really excels is in how it broadens the scope of the action beyond the protagonist and how it deepens our understanding of this cruel and unforgiving world.

There are a lot of moral and philosophical questions that the series is beginning to ask, and it just makes it all the more nuanced and interesting. The aggressive pacing and riveting scripting help make Attack on Titan’s second season just as powerful and exciting as the first. Here’s hoping the highly anticipated third season that’s coming this summer is just as brilliant.

The DVD box set of season 2 comes packed with special features, including episode commentaries and interviews from the Anime Expo 2017. There are also textless videos for the incredibly memorable opening and closing songs, trailers, and promo videos, along with ‘Inside the Episode’ featurettes.