The best drama on television returns with another bold and remarkable season premiere, cementing its well-earned reputation for balancing human emotion with imaginative fantasy. Much like the previous premiere, “Axis Mundi”, it opened with a flashback separate to the main story but foreshadowing issues the regular cast will be facing. While it wasn’t as astonishing or as emotional as season 2’s unforeseen trip back to prehistoric times, it was definitely memorable and guided interpretation of the ensuing hour…

In 1844, a religious family prepared for the “end times” along with the rest of their community, believing in a prophet’s prediction of doom, which he appears to arrive at by consulting pigeons. However, time and again, their ritual of standing on the roof of their house to await apocalypse was proven to be premature. The charlatan prophet hastily recalculated his prediction further into the future, but after awhile most villagers grew cynical and turned away from his teachings. Until, eventually, only the pious matriarch of the family remained resolute in her belief that the end is nigh, even her husband and son stopped accompanying her onto their roof, and she become a figure of ridicule in her small community. 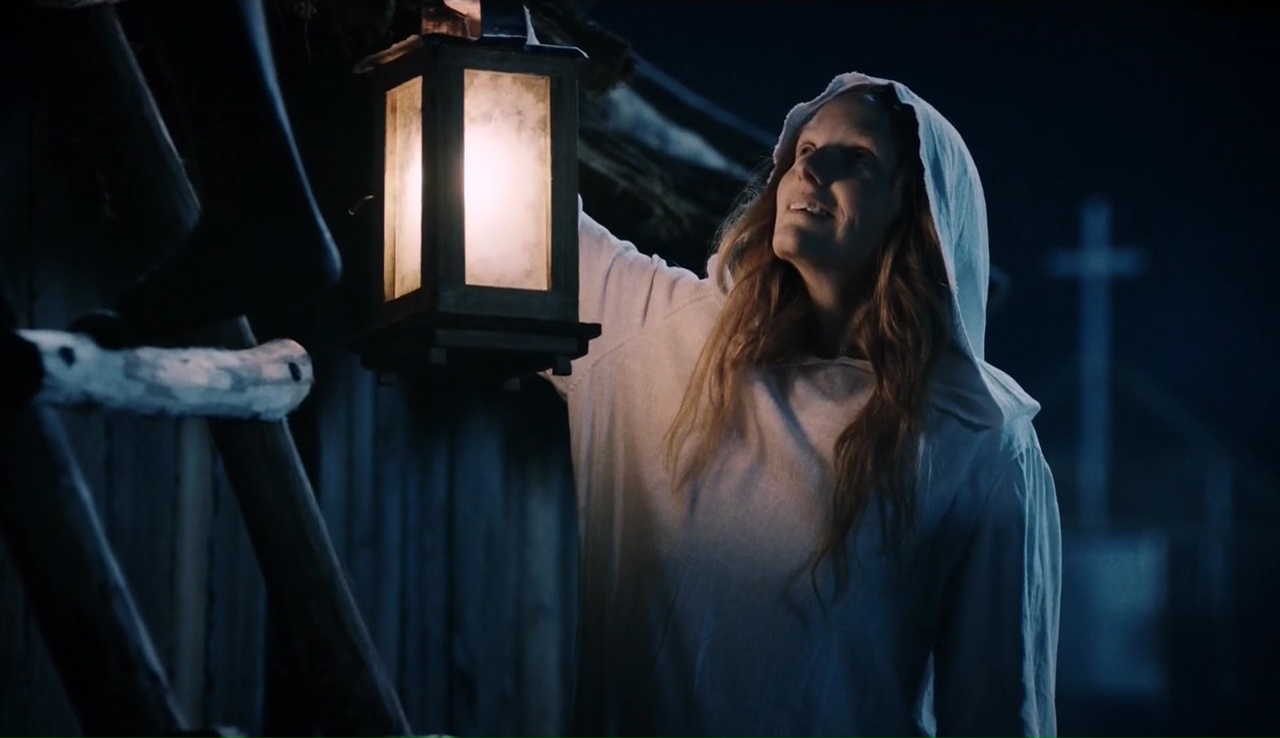 In the present day, The Leftovers swept into its final season by dealing with a few loose ends from season 2, before shifting a few of the character’s dynamics around. Briefly, the issue of the Guilty Remnant, now led by Meg (Liv Tyler), who’d taken over Miracle Visitor Centre, was returned to and resolved in a very unexpected way. Evie Murphy (Jasmin Savoy Brown) awakened lying amongst the rest of her cult, thanks to a brilliantly subtle jump-cut from the 1800s to the 2000s, which clearly made her analogous to the staunch village believer whose unshakeable faith only managed to ostracise her from loved ones. The Remnant’s own doomsday was man-made, as an aerial drone dropped a missile onto the Visitor Centre and obliterated them into a large crater. It was a very harsh way to deal with the matter, one would think, so perhaps we’ll get more insight into this extreme methodology soon. It does appear the US government invented a cover story to hide what really happened from everyone.

Three years later, life’s very different for those left behind in Jarden, Texas. Kevin Garvey (Justin Theroux) has returned to policing, which is an extraordinarily difficult job now the world-famous town’s become open to the public; his girlfriend Nora’s (Carrie Coon) also resumed her previous job, working as a liaison for Departure-related issues the cops may encounter; Reverend Matt Jamison (Christopher Eccleston) since become Jarden’s minister, happily preaching to large crowds that hang on his every word, helped in his duties by young Michael Murphy (Jovan Adepo); Matt’s wife Mary (Janel Moloney) is still free of her vegetative state, and has since given birth to their infant son Noah; more unexpectedly, John Murphy’s (Kevin Carroll) in a relationship with Kevin’s ex Laurie (Amy Brenneman) and they run a “psychic scam” to give grieving locals comfort and closure; and Kevin’s son Tommy (Chris Zylka) has joined his father on the police force. 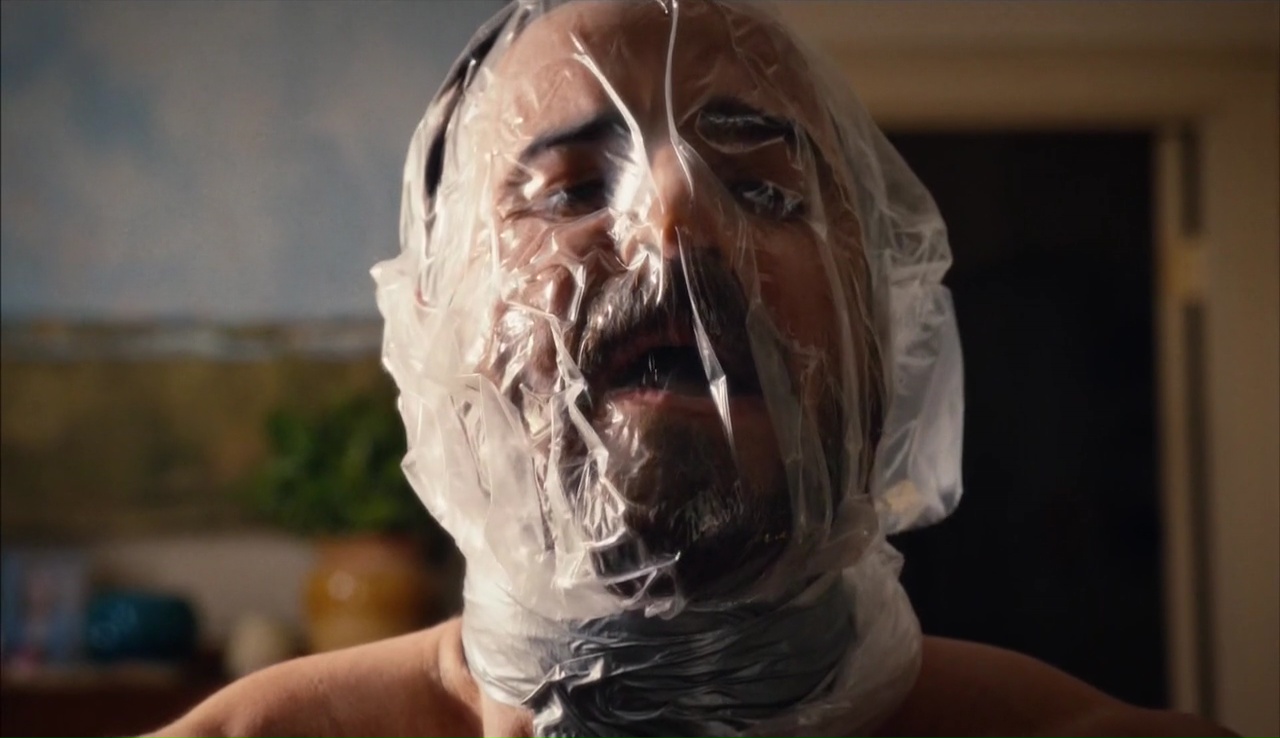 Things are different now, but a lot better — at least on the surface. The Leftovers has a reputation for being “depressing”, which was harder to defend against during a pretty heavy-going first season, but “The Book of Kevin” opens on a relatively upbeat and hopeful manner. The Garvey and Murphy families have combined in an unusual way through marriage, and it doesn’t feel very weird. They’re far from a typical family, but everyone gets along and their nights together are fun and very normal. It’s a good time to be alive, and many of the torments that were eating away at the characters last season appear to have been dealt with…

But, of course, looks can be deceiving. The Leftovers tackles grief in all its unusual forms, and that’s an emotion you can’t always notice on the surface. People project themselves very differently to how they’re feeling in private. There were already a few warning signs sprinkled throughout the earlier scenes of this premiere, like Michael suspiciously closing his laptop when Kevin walked in on him, the mysterious flyers reading “15 Days to Go” with an address to Matt’s church, but certainly in the bizarre moment when Kevin was readying for work and took a moment to stick a plastic bag over his head and asphyxiate himself. Does Kevin have a death wish? Or is he just keen to get back to the “other place” he discovered last season, after taking poison, dying, then being resurrected hours later after visiting a mysterious “hotel” populated by familiar faces from his life. 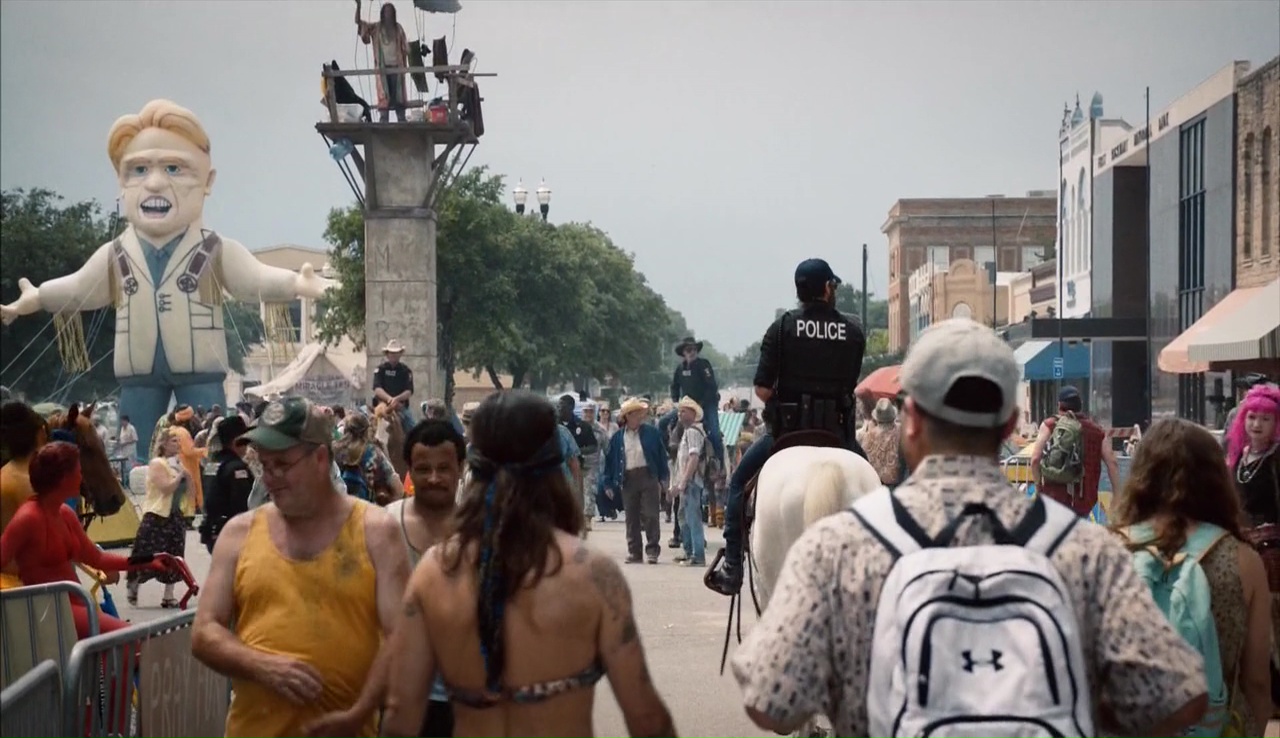 Ultimately, this episode ended with a sense that Kevin Garvey’s of greater importance than he wants to believe. Matt’s written a new “gospel” based on Kevin’s incredible story (hence the amusing title of this episode), and the extraordinary tale can be corroborated by witnesses like John and Michael Murphy. The Reverend’s passion to continue The Bible into a new phase has unfortunately pushed his wife into returning to New York with their son, but Matt doesn’t seem to care too much. While getting Mary back to full health was what drove his every action before, now it seems Kevin’s become his big project. And despite the fact Kevin’s maybe embarrassed by being deified like this, or perhaps wants to forget about everything and move on with a normal life, he can’t quite bring himself to destroy the handwritten ‘Book of Kevin’ on a flaming grill.

You can tell Damon Lindelof is involved with The Leftovers, co-writing this episode with Patrick Somerville, as it retains traces of his earlier smash hit Lost. Both shows have the same kind of world-building clarity and underlying strangeness, and they share a very satisfying quality of containing clever twists and surprises. It just so happens that The Leftovers is much better equipped to deal with the deeper, bigger questions of life and the universe than Lost. 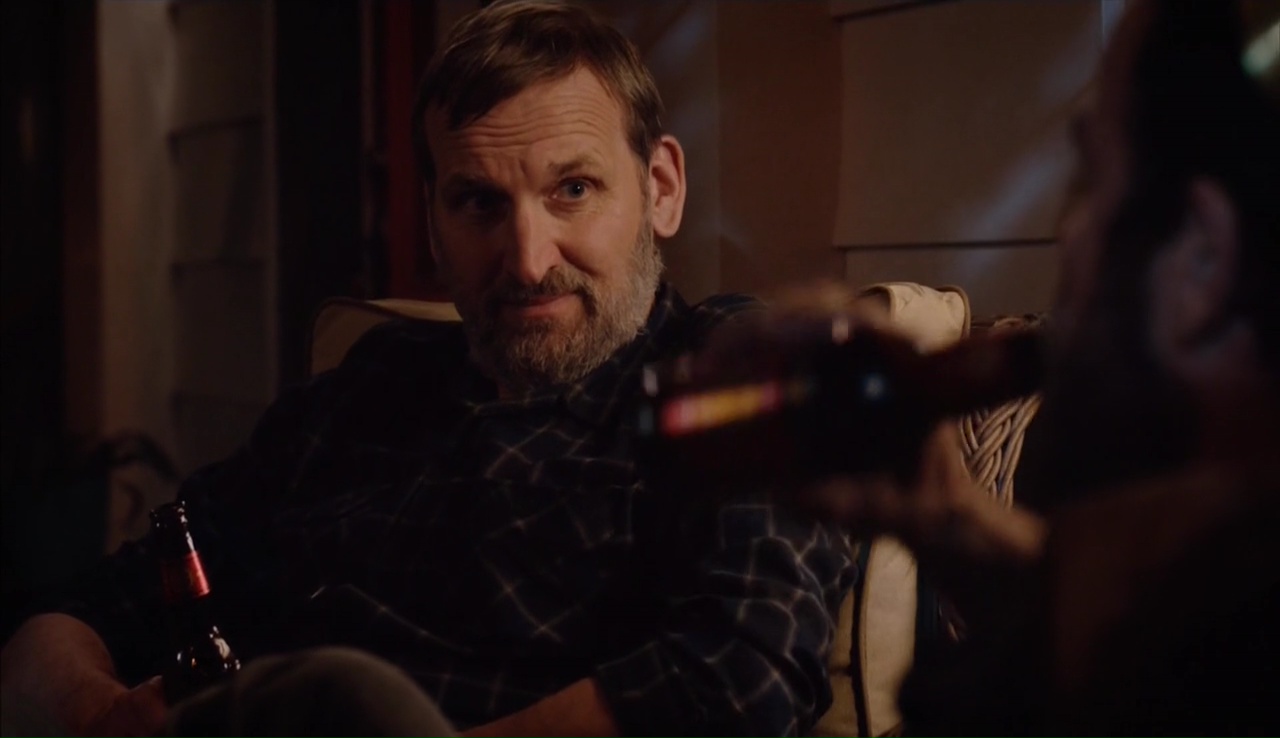 Here, a later scene with Kevin staring up at skywriting that read “13 Days to Go”, segued into a similar sky filled with white doves being collected by a woman who cycled into the countryside to deliver them to an Australian nun. The cyclist, referred to as “Sarah” by the nun, was then revealed to be none other than Nora, looking a few decades older with grey hair and wrinkles, refusing to confirm the name “Kevin” means anything to her.

It appears we’d suddenly leaped forward in time again, and for whatever reason Nora’s since moved to Australia and doesn’t want anything to do with Kevin. What’s going on? Why is Nora collecting doves? The premiere’s opening scene in the past echoed its final scene in future, both with the presence of birds. So has Nora since become a prophet? Have more people “departed” since Nora and Kevin were together in Jarden? Did they break up acrimoniously? Or maybe she genuinely doesn’t remember Kevin for whatever reason?

“The Book of Kevin” was a great episode to return with after a longer than usual break. The Leftovers asks so many questions, and yet knowing no firm answers are coming has become part of its strength. It’s like a modern-day religious text. You have to navigate your own way through it, using whatever you believe to be true. We’re now many years past the day of the Departure, and is something going to happen on the seventh anniversary? For Matt, it doesn’t really matter, although he believes ‘Miracle, Texas’ is the place to be if something does happen. Or, as Kevin puts it “nothing will happen on the 14th unless everything happens on the 14th”. But will all these characters be left standing on their rooftops, awaiting another disappointment, as the Victorian villager did? Let’s wait and see. 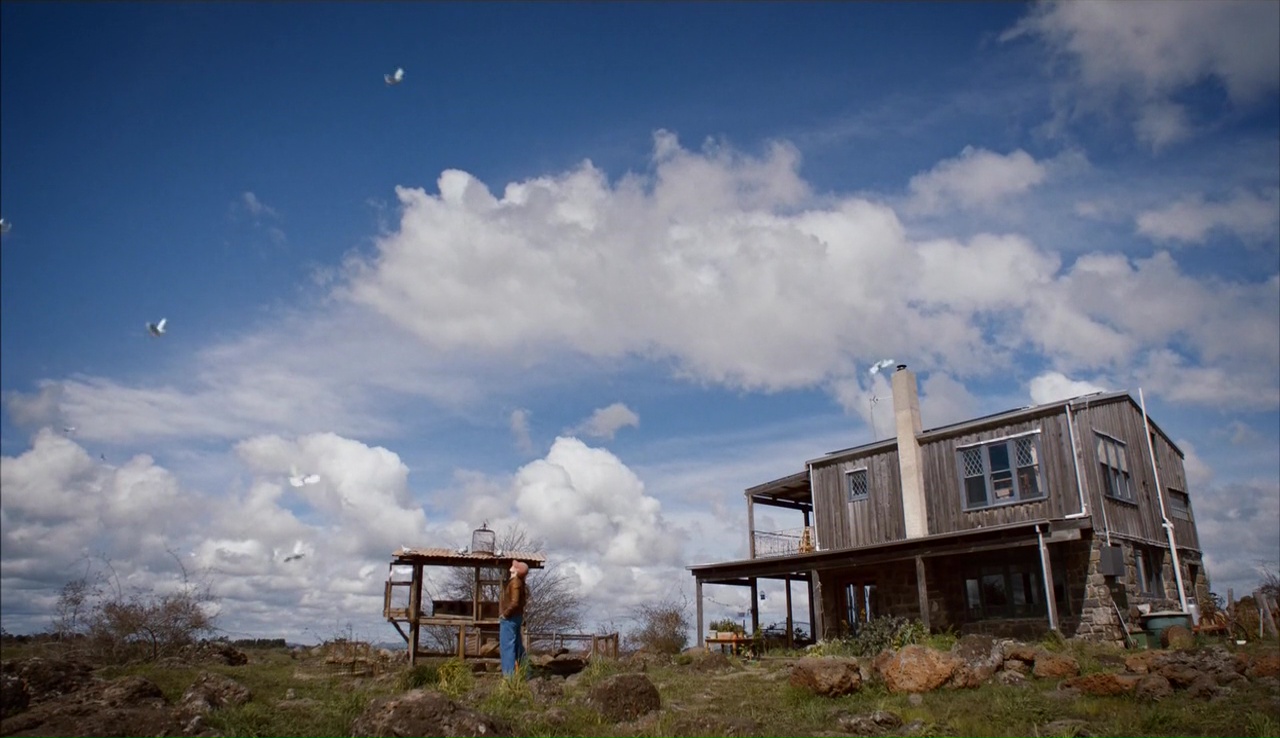