Another methodical episode, which you either appreciate or find your leg twitching with impatience. I rather enjoy the oasis of calm a drama like Better Call Saul provides, punctuated with moments of tension and big surprises. At least “Witness” did a few things people have been asking for, in terms of bringing Jimmy (Bob Odenkirk) and Mike’s (Jonathan Banks) storylines closer together, after Mike followed a series of couriers around Albuquerque with his petrol cap tracker, before sending Jimmy in as reconnaissance at the Los Pollos Hermanos restaurant.

That entire sequence was a thrill, despite not much actually happening. It’s just fun to see Jimmy and Mike working together as a team, even if Jimmy’s far more enthusiastic about playing spy for the morning. It was also a good demonstration of how Better Call Saul tends to play things, because you could have cut the scene of Jimmy inside Los Pollos Hermanos together to make it last a minute, but instead we spent a good five watching him buy his meal, take a seat, see the courier enter with his knapsack, move around the restaurant for a better vantage point, then check the bin for anything the courier may have dropped inside after emptying his tray. Jimmy was a little conspicuous at times, with his fixed stares and unusual behaviour, but he did a thorough job. 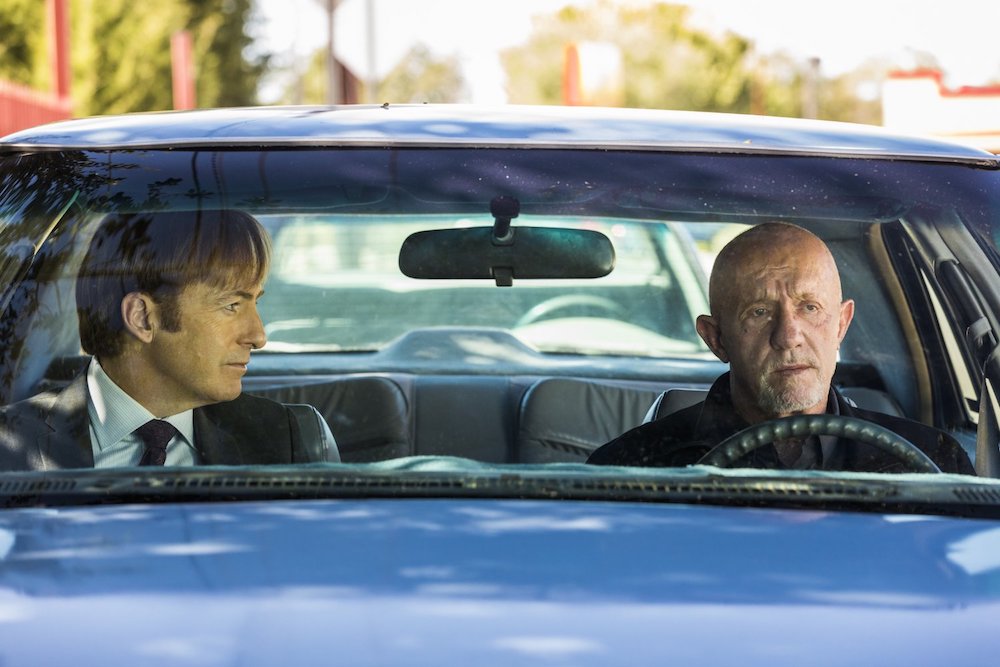 Of course, this scene also delivered something fans have been clamouring to see for years: the return of Gus Fring (Giancarlo Esposito0, whose name wasn’t in the credits). For awhile, I thought the show was going to tease us by keeping Gus in the background as a familiar yellow and brown blur cleaning up, but thankfully writer Thomas Schnauz didn’t frustrate us for long. Gus appeared in his cheerful, eager-to-help alter ego as the restaurant manager, helping Jimmy retrieve his wrist watch from the trash. It’ll be interesting to see how Gus plays into the season, and if we’ll notice some unfamiliar traits with him, as he’s slightly less experienced than we saw in Breaking Bad.

However, Gus clearly isn’t a novice when it comes to running his drug operation. It became clear that something tipped him off regarding Mike’s investigation (possibly Jimmy’s behaviour while snooping around), and it was classic Gus when Mike’s days of tailing couriers around ended with him finding his petrol cap in the middle of a desert road with a ringing mobile phone on the top. Gus was undoubtedly on the line, but we’ll have to wait and see how their conversation went. I have a feeling, informed by knowledge of Breaking Bad, that Gus will have been impressed with Mike and make him an offer to join his outfit. I just hope that Mike moving closer towards Gus won’t mean his story again drifts further from Jimmy’s. 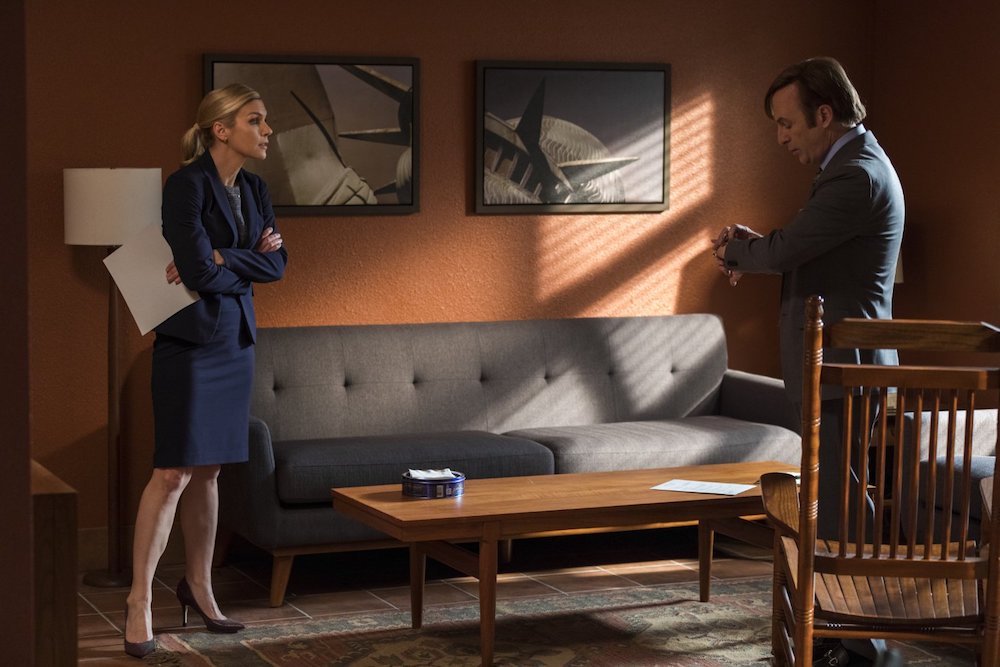 Jimmy’s own storyline this week wasn’t as good as Mike’s, which often happens, but I still enjoyed seeing the differences between Jimmy’s style of business and how Kim (Rhea Seehorn) prefers to do things. Their joint interview for a new paralegal showed their contrasting styles off very well, with Kim trying to be very formal and professional, while Jimmy was more relaxed (even throwing in “trick questions”) and had decided to hire their first interviewee just from a gut feeling. In many ways, together they make up the perfect lawyer: Kim’s the slick executive type with fine attention to detail, while Jimmy is more improvisation and a better people person. I always smile whenever Jimmy uses little tricks with his elderly clients to win their trust and affection, like remembering small details about their lives and interests. Although this does mean half his appointments seem to involve him listening to old people chat about trivial family matters, which can be a little soul destroying. Maybe it’s going to be a big reason he ditches his current agenda, and instead becomes a dodgy “criminal lawyer”.

Another welcome surprise in “Witness” was the sizeable movement with the Jimmy and Chuck (Michael McKean) situation, with Ernesto (Brandon K. Hampton) predictably spilling the beans to Kim that Chuck has a recording of Jimmy confessing to forging legal documents to win the Mesa Verde case. Kim brought it all to Jimmy’s attention, making a show of becoming his lawyer with this matter, and together they rationalised that Chuck can’t really do much with the tape. Jimmy can easily claim he was lying about doctoring documents, to help his brother’s fragile mental state. Unfortunately, Jimmy was so enraged by Chuck’s underhanded behaviour, that he quickly shot himself in the foot by storming over to Chuck’s house and destroying the cassette tape — unaware that Chuck’s private investigator and Howard (Patrick Fabian) were present, as the titular witnesses. So now Jimmy has dropped himself deeper into a mess, although I guess it’s possible he can keep claiming he was just angry with his brother and wanted to make a show of it to his face. 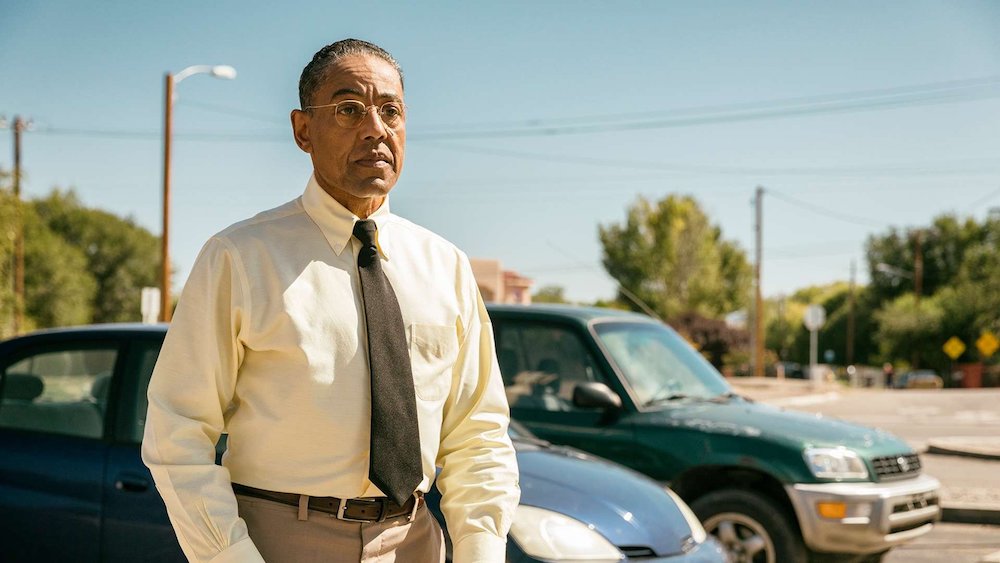 Overall, I enjoyed “Witness” and appreciated how it’s pushed the story along, despite doing so in its customarily slow-burn style. Now that Gus is part of the story, Mike’s life is about to get much more interesting, and there’s a chance that Jimmy’s problems with Chuck will be solved in a more underhanded way than anticipated. As we inch closer to Jimmy McGill becoming “Saul Goodman”, maybe we’re going to be very surprised by just how low Jimmy takes matters. The fact that neither Chuck or Kim appeared in Breaking Bad (or were even mentioned) leaves the fate of those characters wide open on this show, and something tells me we’re going to end Better Call Saul feeling like Jimmy “sold his soul” for a level of success that had a steep, tragic cost.