Green Room doesn’t mess around. Clocking in at a lean 94-minutes, this riveting and claustrophobic thriller doesn’t waste time and shows that writer-director Jeremy Saulnier (Blue Ruin) knows exactly what he’s doing. If you’re craving something a little rough around the edges, the gritty and grimy Green Room won’t disappoint, as it throws the unlucky members of a rock band into a deadly and dangerous scenario where it truly feels like there’s no escape.

We open on the aforementioned punk group The Ain’t Rights (Anton Yelchin, Alia Shawkat, Joe Cole, and Callum Turner) as they struggle to string together cash while on tour, choosing to take on a gig at a neo-Nazi skinhead bar deep in the woods outside Portland, Oregon. They boldly start their set with a cover of Dead Kennedys’ ‘Nazi Punks Fuck Off’, enraging the audience, before winning them over with their original material. As they prepare to leave, though, Shawkat’s Sam realises she’s left her phone behind and Yelchin’s Pat goes back to the green room to grab it for her. Unfortunately, he stumbles in on a dead body, making the band witnesses to a crime their ruthless hosts would rather nobody knew about.

The film gains most of its tension from this central unfairness: that the band didn’t do anything other than be in the wrong place at the wrong time, and now they’re being punished for it. While the script soon allows them some semblance of control—keeping the door locked from those on the outside and finding an ally in Amber (Imogen Poots), a friend of the dead girl—it consistently makes it clear that they’re in a desperate situation that’s nigh impossible to survive. Green Room always keeps us in the loop with the plans of its menacing villains, too, ratcheting up the tension by making us keenly aware what new horror awaits the ill-fated band next. 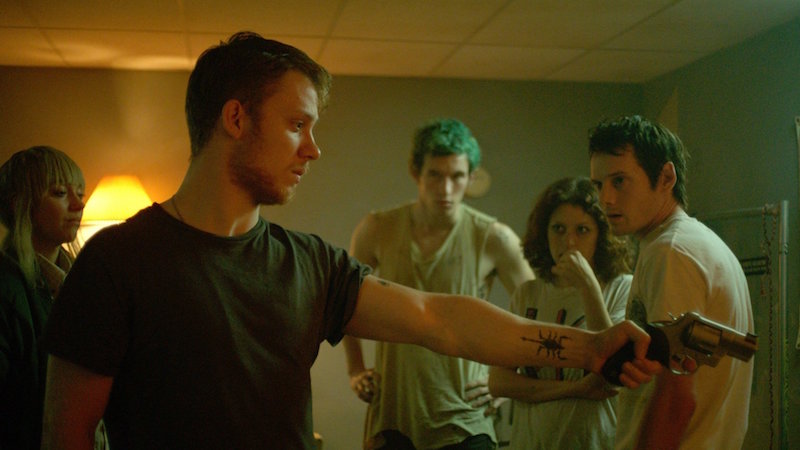 What makes the white supremacist antagonists here so effective is not even their highly brutal methods, it’s the cold calculation and unlikely politeness with which they organise themselves. Patrick Stewart is revelling in the chance to play evil as Darcy Banker, the owner of the bar and leader of the Nazi collective, while Blue Ruin star Macon Blair plays his right-hand man Gabe, and Mark Webber is Daniel, another skinhead key to the plot. When the realisation hits of why exactly the Nazis are being so patient and systematic in their approach to addressing the problem of their unwelcome guests, it carries a twisted and unnerving logic. It’s simultaneously the Nazi gang’s best move to stay out of trouble with the cops, and the most cruel way they could deal with the innocent but unfortunate band members. 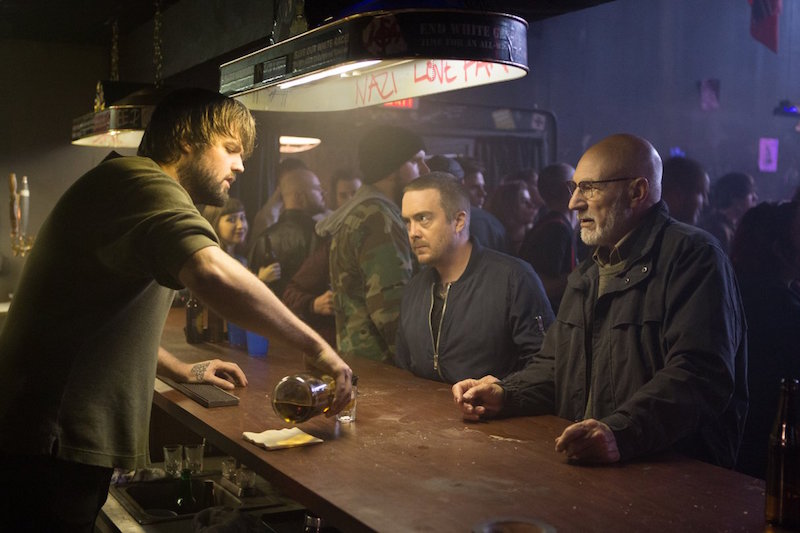 With its brisk running time, the film knows it has to establish characters quickly and wastes no time giving them straightforward and easily identifiable traits. Bass player Pat is reasonable but indecisive; guitarist Sam is practical; Joe Cole’s drummer Reece is arrogant; and Callum Turner’s lead singer Tiger tries to remain be laid-back and calm. Soon enough, their individual characteristics become important as the film increases its intensity and puts them all under extreme pressure. Savage violence and detached brutality begin to dominate, and as Green Room goes on it develops into something seriously gnarly and disgusting, making you feel every excruciating act of viciousness that happens. 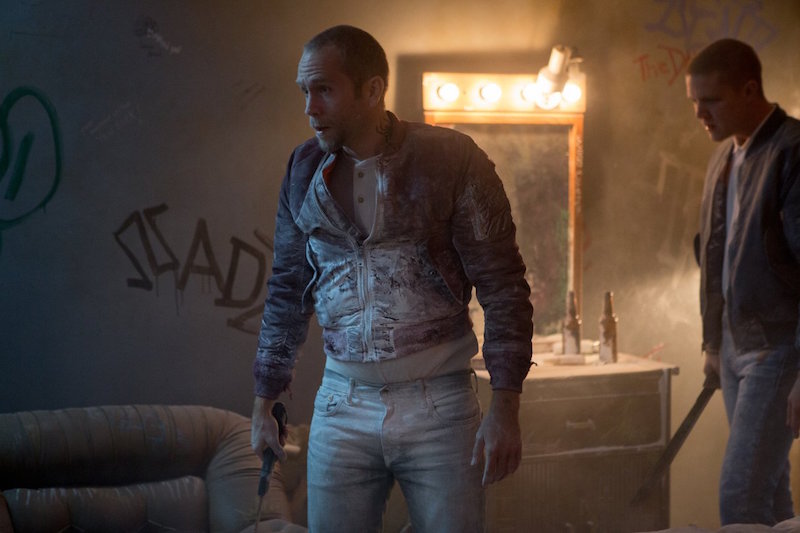 If this sounds unpleasant to watch, be warned that’s exactly true. The audience this will appeal to is going to be those that can endure a suffocating sense of dread, and those that can stomach effects displaying gruesome details in ways that feel unflinchingly real. None of this is purposeless, though, as the film presents us with a dark exploration of cult behaviours and how human nature can be twisted. Even if you try to ignore the most depraved ideology, Green Room argues, it could still thrive somewhere deep in the woods and pervert others to its warped belief system. That poisonous way of thinking is difficult to escape, both for those swayed to believe in it and those unfortunately trapped in its clutches. These ideas are conveyed through a simple symbol, as the film’s portrayal of dogs trained to be ruthless killers makes for a neat parallel with the obedient men under Darcy’s control.

It doesn’t take long for Green Room to make it clear that there’s almost nothing men like this won’t do to protect themselves, even against those who’ve done nothing but risk exposing them. As it storms towards a tremendous conclusion, this outstanding nail-biter only becomes more captivating. Saulnier manipulates the suspenseful atmosphere expertly by keeping the plans of the attackers foremost in our minds, as we and the protagonists try to wriggle out of this situation alive. The film combines shockingly real violence with worryingly believable villainy, delivering its story with a ferocious energy that keeps you on the edge of your seat in terror.