This week on Game of Thrones, Bran ventured into the past, Jon looked to the future, Arya’s training reached its end, Ramsay received a gift, and Dany arrived at the Vaes Dothrak… 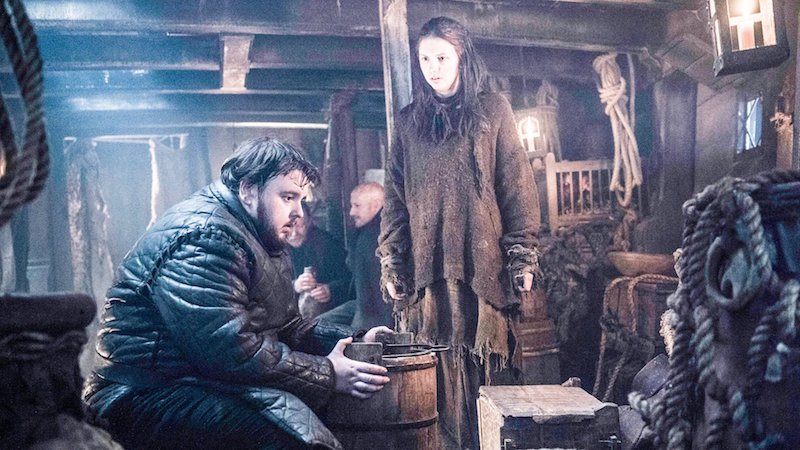 There was a short scene with Samwell (John Bradley), who’s being seasick whilst travelling to Oldtown with Gilly (Hannah Murray) and their baby. It existed to let us know women aren’t welcome at the Citadel, so Gilly will be left with Sam’s family at Horn Hill while he trains to become a maester. Hopefully this isn’t a way of ridding Sam of Gilly’s presence, who surely has more to offer than being a ball and chain. Perhaps Gilly will get her own little story, as she mixes with Sam’s family? Uh, exciting? 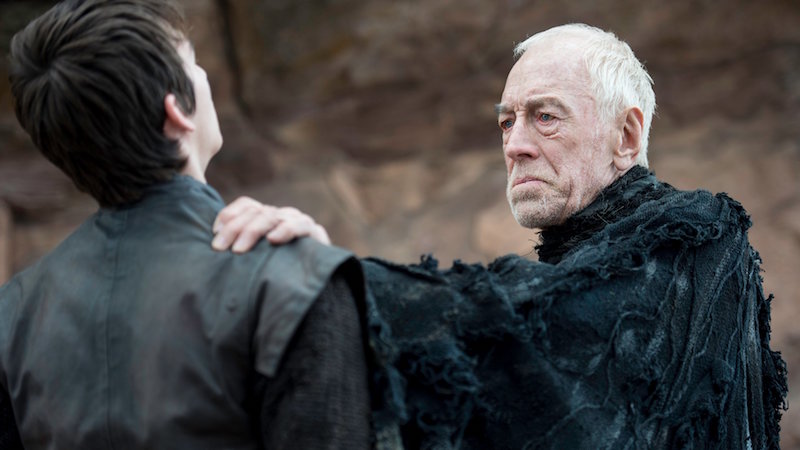 Bran (Isaac Hempstead Wright) continued his ‘vision quest’ with the Three-Eyed Raven (Max von Sydow), by observing a famous moment from the past where a young Ned Stark (Robert Aramayo), Lord Howland Reed, and other northern soldiers arrived at the Tower of Joy in Dorne’s Red Mountains. They were there to enquire ask the whereabouts of Ser Arthur Dayne (Luke Roberts), who wasn’t at the Battle of the Trident, now that Robert Baratheon’s overthrown the Mad King and Prince Rhaegar’s been killed. It seemed that Dayne was keeping Ned’s sister Lyanna captive in the Tower at the behest of Rhaegar, and a sword fight ensued—ultimately ending in a dishonourable move from Lord Reed, who stabbed Dayne in the back to allow Ned an easy victory.

I’m not particularly keen on the involved history of Westeros, as it can hard enough keeping track of the present-day narrative. But this scene revealed three things:

However, I hope we’re not headed down a path where Bran can use his abilities to undo some misfortune that befell his family. Game of Thrones needs to be careful how far it’s delving into sorcery and mysticism now, because making it seem easy to resurrect the dead is already enough of a problem for the show. Please don’t start altering history! 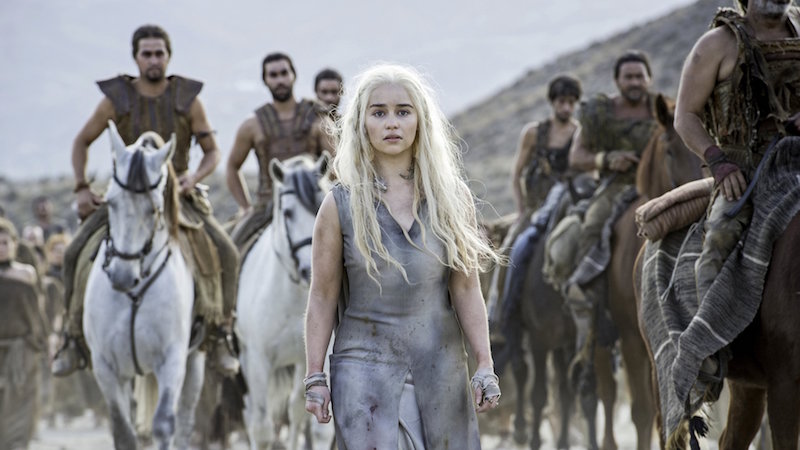 We got a small scene with Daenerys (Emilia Clarke), freshly arrived at the ‘Vaes Dothrak Retirement Home for Ex-Khaleesi’. She’s frustrated her magisterial background isn’t being taken seriously by her fellow Khaleesi—in particular, the elder Dosh Khaleen (Souad Faress). And now it seems she’ll have to wait for the khalasar to decide her fate, as a rare Khaleesi who ran away following the death of her Khal. I’d care more about this storyline if it didn’t feel like a retread of another humbling experience Dany went through with the Dothraki in season 1, frankly. 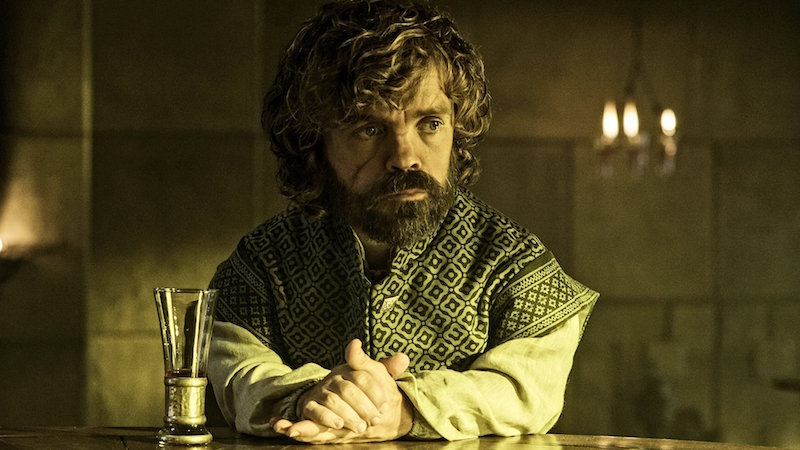 One of the hour’s better moments was seeing how someone like Varys (Conleth Hill) manages to extract secrets from people, without resorting to violence and torture. He simply offers something they can’t refuse; a good, fair deal. Here, a local woman called Vala, allied to the Sons of the Harpy, was persuaded to reveal their mutiny is being controlled by the slave masters of Yunkai, Astapor and Volantis. I really liked how Varys only had to offer Vala a new life and money to get this information, whereas the normal way is to brutalise people until their tongue loosens.

There was also a fun scene where Tyrion (Peter Dinklage) tried to pass some time with Unsullied leader Grey Worm (Jacob Anderson) and translator Missandei (Nathalie Emmanuel), who aren’t the most fun-loving and garrulous of people. It was nice to inject some humour into the show, with Tyrion essentially poking fun at what side characters do when the camera’s not on them. In Grey Worm’s case, he regales the lovely Missandei with tales of his patrols with the Unsullied. 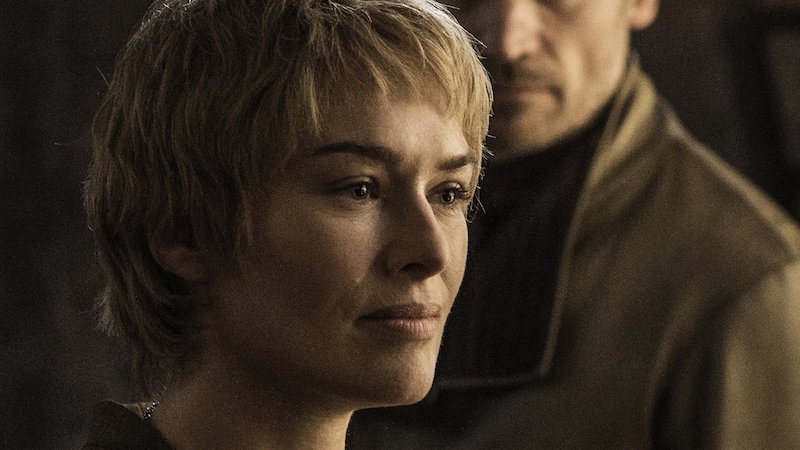 Cersei (Lena Headey) is still having trouble reasserting her authority on the capital, as important meetings are going ahead without her presence and little is being done about the humiliation she went through. There was a sign of a longterm plan forming, with Cersei and Jaime (Nikolaj Coster-Waldau) asking Qyburn (Anton Lesser) to send spies to the North, the Reach, and Dorne, but it’s unclear why. A little better was King Tommen (Dean-Charles Chapman) growing some balls and marching into the Sept of the Faith Militant to demand the High Sparrow (Jonathan Pryce) let his mother see her daughter’s tomb. Alas, the poor boy once again found himself being wrapped around a charming adult’s finger — with the High Sparrow placating Tommen with talk of mother figures in the Faith of the Seven. A part of me wishes Joffrey was still running things, because the High Sparrow’s head would be on a pike by now. 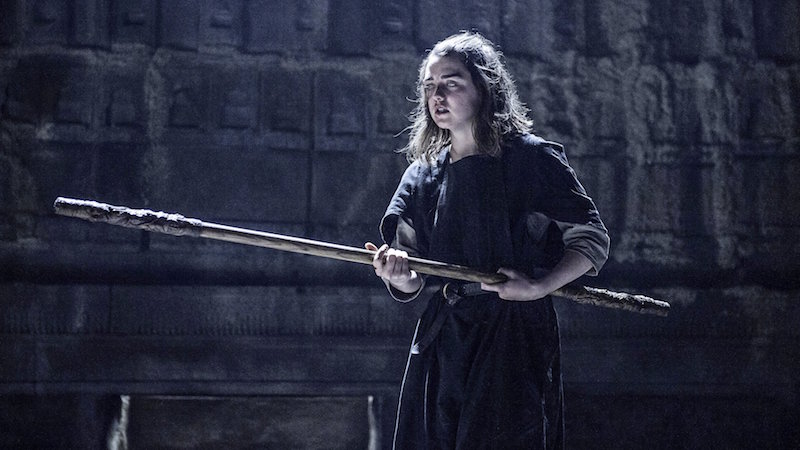 I really hope we’re at the end of this interminable storyline, which has felt like nothing but a huge misstep. Arya (Maisie Williams) was a more interesting character when she was a spirited brat travelling around Westeros with The Hound and getting into mischief. As everyone predicted last season, her eyesight was restored by Jaqen (Tom Wlaschiha) after she proved herself in blind combat and kept refusing the temptation to say her name in exchange for her sight. It’s been a long, dull slog getting here… but maybe now Arya can get back to Westeros and take a proactive role in events that actually matter?

Ramsay (Iwan Rheon) is now Lord of Winterfell with Harald Karstark his right-hand man, but his new position doesn’t impress visiting Smalljon Umber, who just wants military assistance in defeating Jon Snow and his Wildling army at Castle Black. An alliance is eventually formed, mainly when Smalljon offered up none other than Rickon Stark (Art Parkinson) and Osha the Wilding (Natalia Tena), who haven’t been seen on the show since season 3. If you can barely even remember Rickon, refresh your memory here. 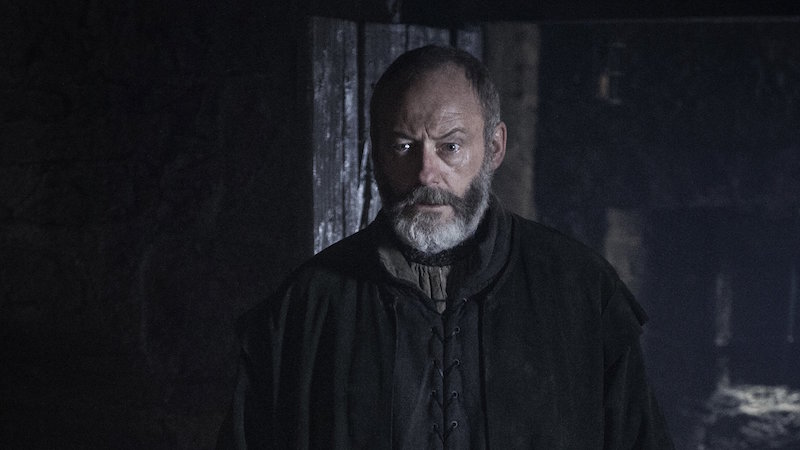 The main reason to be excited about “Oathbreaker” was to see what happened when Jon Snow was brought back from the dead. Davos (Liam Cunningham) was understandably agog at witnessing such a miracle, while even Melisandre (Carice van Houten) looked delighted her magic worked and she has a new “prince” to believe in. But this was otherwise a fairly unremarkable end to the whole ‘Is Jon Snow Dead?’ arc. I mean, the writers didn’t swerve our expectations very well — Jon was brought back to life, exactly as we expected him to be, with no obvious signs of change, and proceeded to execute those who murdered him.

Well, that’s not entirely true: I didn’t predict Jon’s decision to leave the Night’s Watch because ‘death’ is a handy escape clause (although the title was a glaring clue). Trouble is, I was looking forward to seeing Jon pick up where he left off: marshalling a hybrid army of Wildlings and Night’s Watch to fight the encroaching White Walkers. But where does his resignation leave us? Where’s Jon even going? Does he still want to protect the Wall from the undead hordes? Does leaving the Night’s Watch give him more freedom to solve the problem from a different angle? Will he be persuaded back as Lord High Commander somehow? Perhaps when the Ramay/Smalljon alliance arrive?

Like most episodes of Game of Thrones, your overall feeling on “Oathbreaker” will depend on how many of your favourite storylines and characters were involved. Unfortunately, I’m currently not keen on events happening in Meereen, Braavos, King’s Landing, or the situation at Vaes Dothrak, which is why I can only rate this third episode as ‘good’. I appreciated the forward movement with Jon Snow’s story, and Bran’s flashback was very interesting (although incredibly confusing to non-book readers and super-fans), but everything else felt like it was groundwork for better hours to come. And that’s fine, of course. It sometimes feels wrong to review individual episodes of this show, because Game of Thrones works best as a cumulative piece of work.