This is interesting… a unique curio and one of the best folk horror films to come out of Finland! But that doesn’t necessarily mean it’s good. The White Reindeer does boast several strengths, however, including some striking imagery and a cast showcasing the country’s top talent from the 1950s. At the 1953 Cannes Film Festival, it was awarded the ‘Best Fairy Tale Film Award’, which is quite an accolade when you consider that the Jury President that year was Jean Cocteau. His 1946 film, La Belle et la Bette, remains quite possibly the most beautiful fairy tale film ever made. So, you’d think for The White Reindeer to catch the great Cocteau’s eye, seven years later, it would have to be something rather special. One wonders what competition, if any, there was for the category back then!

It’s not a bad film and I’m happy to finally see it as a restored ‘Masters of Cinema’ Blu-ray from Eureka Entertainment. But I think its appeal is limited to those with a keen interest in folklore, anthropological history, and Scandinavian cinema. Especially when one considers the beauty and sophistication of its folklore-inspired predecessors in the fantasy genre, not least Cocteau’s aforementioned masterpiece. 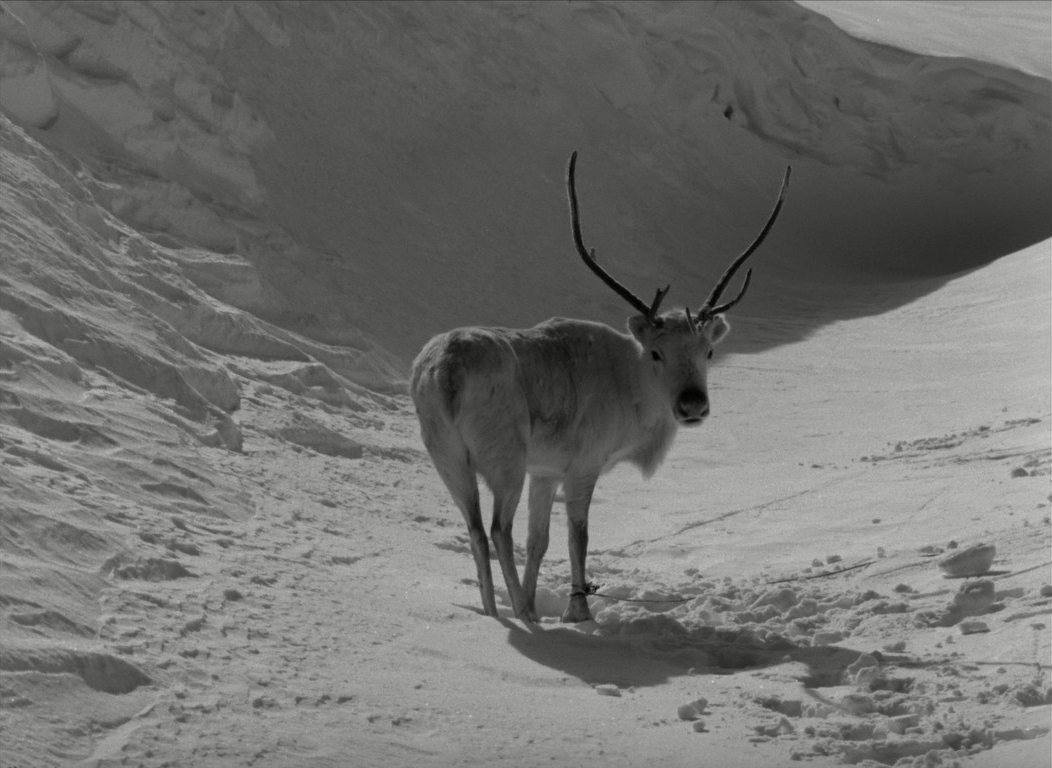 Though I’d love to give The White Reindeer a kinder review—I mean, it’s not every day you get to see a film about a sexy vampiric were-deer!—I have to say it falls short of its potential on many levels. The only way to cut it some slack is to keep adding qualifying phrases such as, “for its time”, or “considering the budget…” Excusing a film for historical reasons is only valid to a point and if it doesn’t measure up to its contemporaries, or in this case its predecessors, then there’s a limit to how generous one can be. Perhaps my expectations were too high, as it’s a film that’s been lurking somewhere on my watchlist for a while. Its premise is very intriguing and I am glad it’s been preserved and restored for posterity.

The opening sequence creates an odd dreamy feel. It’s almost a music video for a full folk song telling the tale that inspires the rest of the film, over some sort of silent footage. It reminded me a little of the semi-documentary anthropological B Movies that used to accompany feature films. The song is atmospheric and evocative and tells of the accursed birth of our heroine Pirita (Mirjami Kuosmanen). There’s a fire we can’t hear, a goat moving about with silent footfalls, yet when the characters speak it’s loud and jarringly bold, as is the ubiquitous and obtrusive score that takes over by Swedish composer Einar Englund—for which he inexplicably garnered one of the film’s three Jussi Awards, the top accolade of the Finnish film industry. It may be better to approach it as a silent movie and select a subtler and more haunting soundtrack, to your own tastes, as the brash orchestrations ruin any chance of conjuring a magical atmosphere. After all, one can make do with the subtitles as there’s little attempt to synchronise the speech anyhow! Clearly, most of it was shot without location sound and no foley was added in post-production. 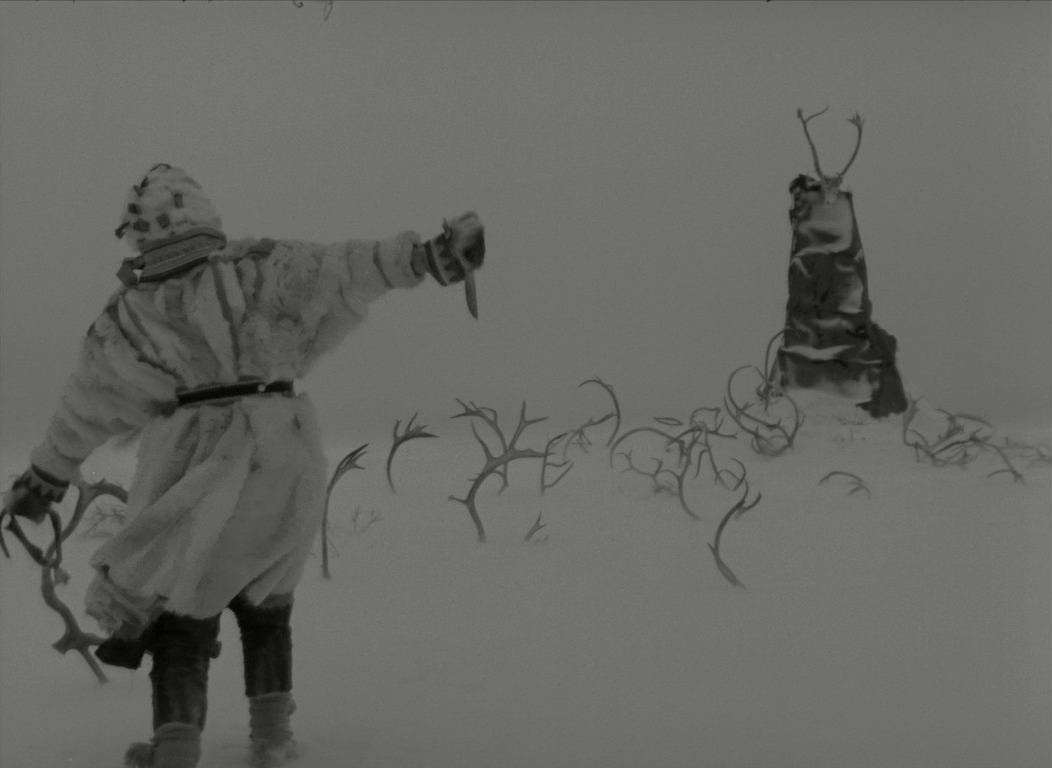 I’m not sure how anthropologically correct it is, but it’s convincing enough. We get to see some Sámi traditional life: the women-folk stuffing shoes with straw insulation, a marriage ceremony or two, sledge racing, nighttime gatherings around campfires. Much is made of the people’s interdependence on the reindeer herds and often the folk are shown as minuscule figures in the sublime snowy wilderness.

The setting is so graphic, it’s a gift to the filmmaker, offering plenty of scope for striking monochrome visuals. On the whole, director and cinematographer Erik Blomberg rises to the challenge. Shooting in snowy white-outs and keeping the fabric patterns of clothes and grey tones of human skin would require quite a talent, I should think. This was recognised by the film’s second Jussi Award for ‘Best Cinematography’, which should come as no surprise as Blomberg had already made more than 30 films, many of them documentaries. Though the schoolboy errors of panning so fast that the frames judder, or being too fast or too slow in pulling focus, do detract from the many moments of breathtaking beauty he does manage to capture. 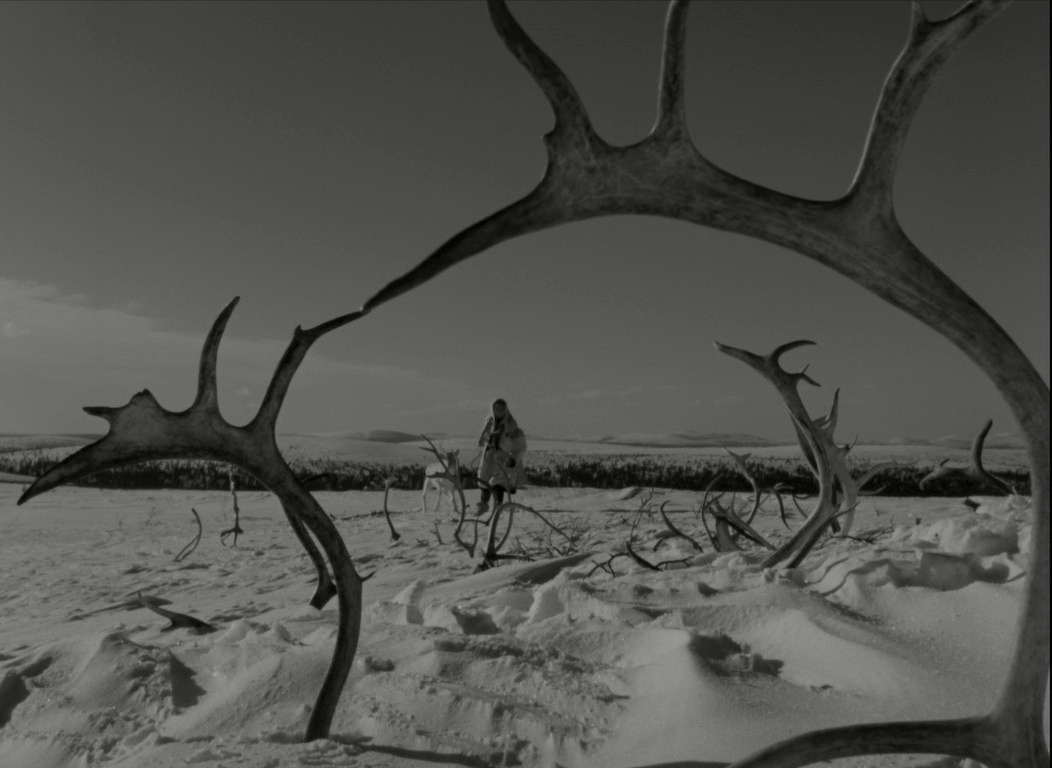 The film’s third Jussi Award, for ‘Best Actress’, deservedly went to Mirjami Kuosmanen for putting her all into the lead role of Pirita. The entire film rides on her lead performance. We meet her as a vivacious young girl who draws the eye of reindeer herder, Aslak (Kalervo Nissilä), during a daring sledge race. Her physicality and open smile hints at untapped feminine energies that enchant Aslak. It isn’t long before they are married, but soon after, he must leave her to travel with the herd—such is the nature of their traditional lifestyle.

Pirita realises that keeping home isn’t enough to satisfy her and those womanly energies drive her to find an outlet. This is a plot point that feels forced and a little rushed. There hasn’t been enough time spent getting to know her character or understanding her motivations. We’re expected to be satisfied that she’s so consumed with sexual frustration that she immediately visits the local shaman and asks for a spell to make her irresistible to men. In his hovel, the witch doctor does some spooky drumming and tells her she must sacrifice the first living thing she sees on her way home, and then her wish will be granted. 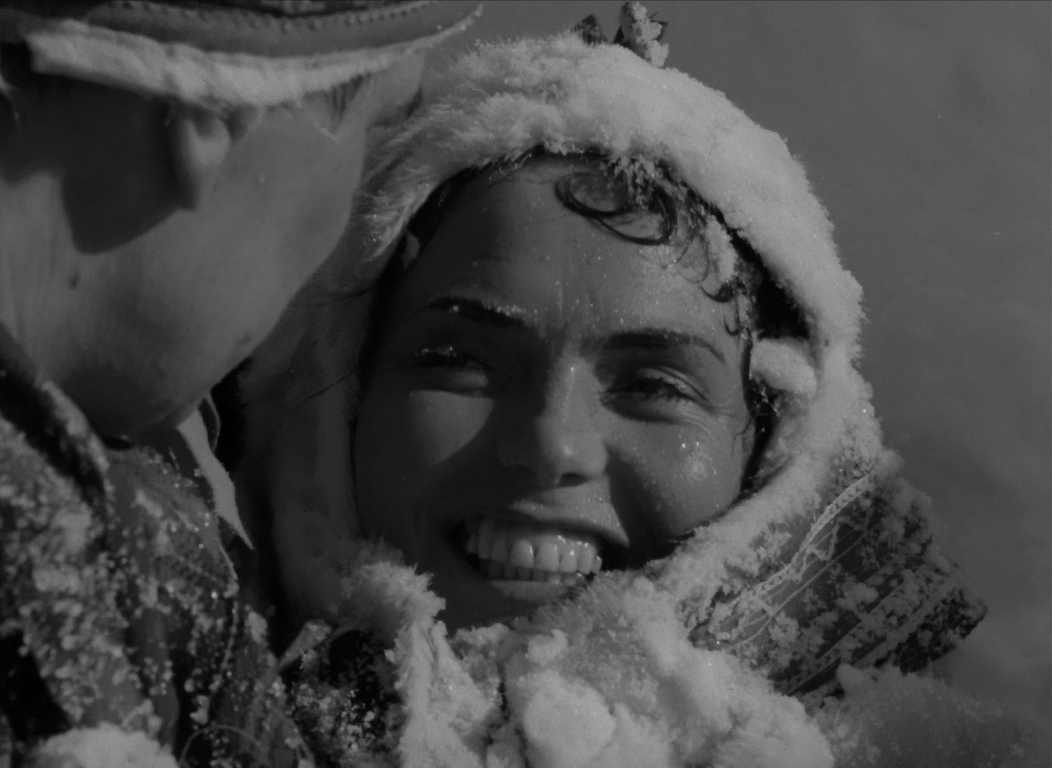 She sees nothing in the snowy hills until, nearing home, she meets her husband who’s been waiting for her with a gift of a rare white reindeer fawn. Without further ado, she takes the fawn off to a place of sacrifice and drives her dagger into its skull. She passes out and when she comes to, there’s no trace of the little deer, not even the merest bloodstain on the snow. Something mystical has happened. Immediately, every young male she passes has an offer for her: would she like to shelter in his tent, or come to help him gather lichens in some secluded spot? The film now veers into a weird pastiche of Jacques Tourneur’s Cat People (1942), only instead of a lithe black panther, Pirita’s unleashed sexuality transforms her into a somewhat ungainly and completely unthreatening reindeer.

There’s one scene that kinda works, when the white reindeer pauses and glances rather alluringly back over its shoulder, using those big soft brown eyes. Is it just me, or are apex predators like panthers or wolves just a bit more impressive, slinkier, and dare I say it sexier than a reindeer? I suppose Blomberg’s working with indigenous folklore here, and male sexuality had already been bagged by the ‘big bad’ wolf, so he chooses to represent female sexuality as a prey animal. In one scene we see a game where three ladies run arm-in-arm through a gathering of men who try to capture them with ropes in much the same way as we have seen them lasso deer from the herd. It’s all in a spirit of fun and the girls laugh and easily escape. So I suppose the idea is that the unexpected ‘awakening’ of feminine sexual power, is when the prey becomes the predator? Pirita’s curse is such that she becomes desirable to men, but in turn, she can’t resist killing them and drinking their blood. Maybe that was transgressive and shocking enough for the time and culture? 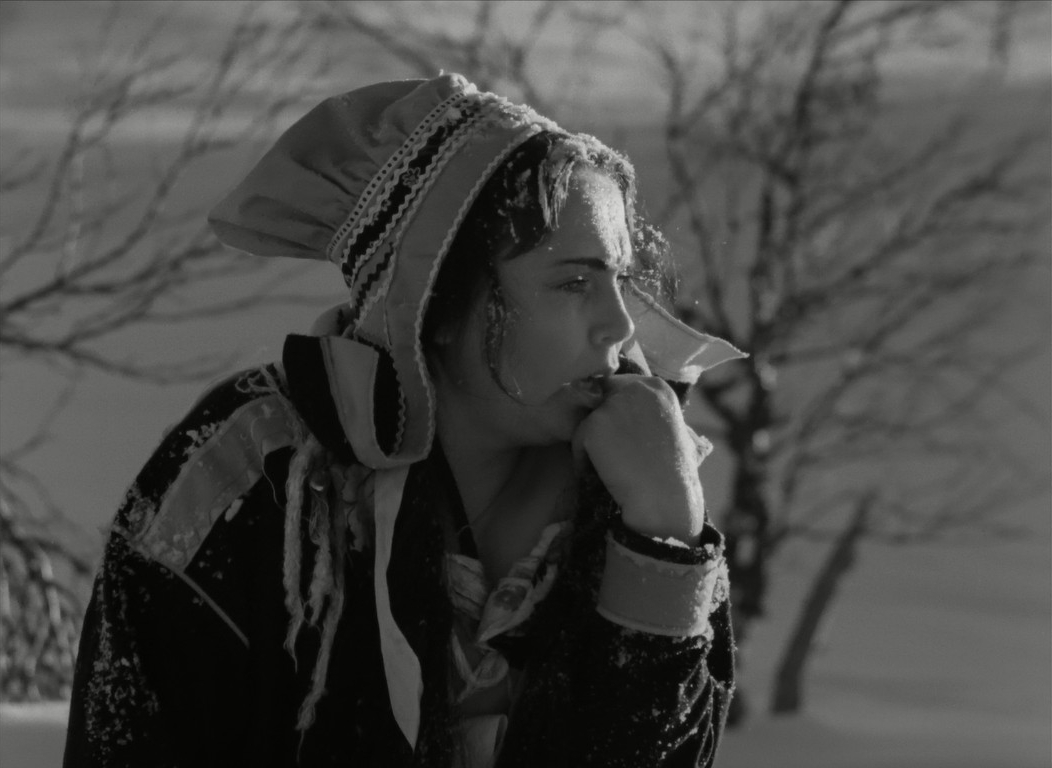 There’s plenty of heavy-handed Freudian imagery too, such as Aslak whittling away at his axe handle as he tells Pirita to go to bed and he’ll join her soon. Or the big iron blade, forged to slay the evil wild deer, being tempered by thrusting it into a vessel of hissing water. But don’t get your hopes up, nothing too racy ever happens.

Pirita isn’t easy to like. She’s beautiful, yes, and a lively free spirit who’ll try to beat men at their own game, whether that’s herding the stock or sledge racing. But that doesn’t detract from her narcissistic selfishness. Her only motivation seems to be some sort of destructive jealousy that she harbours for the reindeer herd that her husband spends too much time tending to. 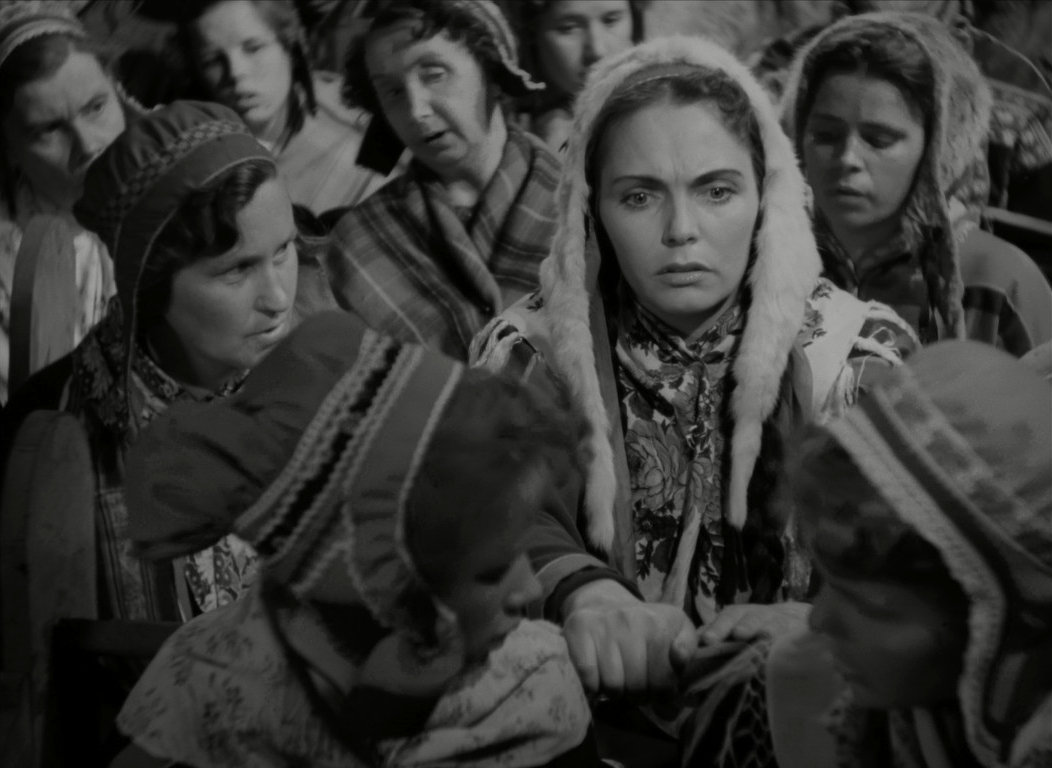 The subtext doesn’t sit well with me, leaving a bad aftertaste. The story aligns itself with the kind of misogyny that drove the historic persecution of women as ‘witches’ in the medieval period and, I assume, the folktale was tainted during that time. It’s because Pirita acknowledges her power over men and revels in her raw sexuality that she becomes the embodiment of an evil spirit. Her domestic duties as a wife don’t wholly satisfy her, therefore she must suffer and be ultimately punished. The portrayal of indigenous shamanic religion is equally skewed and seems to embrace the Christian demonisation of its practices. That’s nothing unusual, though, as every religion tends to discredit the ideas of its predecessors. The basic message is that women are like stock animals and they should either serve, or they are little more than meat. Perhaps this could be excused as a post-feminist condemnation of those masculine attitudes, but I don’t think that argument holds up in the context that the film was originally produced.

Overall, The White Reindeer is a patchy film that’s hard to take seriously, full of unappealing characters. The lack of post-production and absence of foley is the biggest pitfall and really lets it down. Admittedly, it must be a matter of taste, but I found the horrible musical score almost impossible to get past and it prevented any deeper engagement until I watched it on mute whilst playing Diamanda Galás’s “Plague Mass” in the background… only then could I appreciate it’s a story with unrealised potential, begging for a stylish remake. So, step up you young Sámi cineastes and take ownership of this unique folklore, perhaps with a cool soundtrack next time around—after all, HIM. are Finnish! 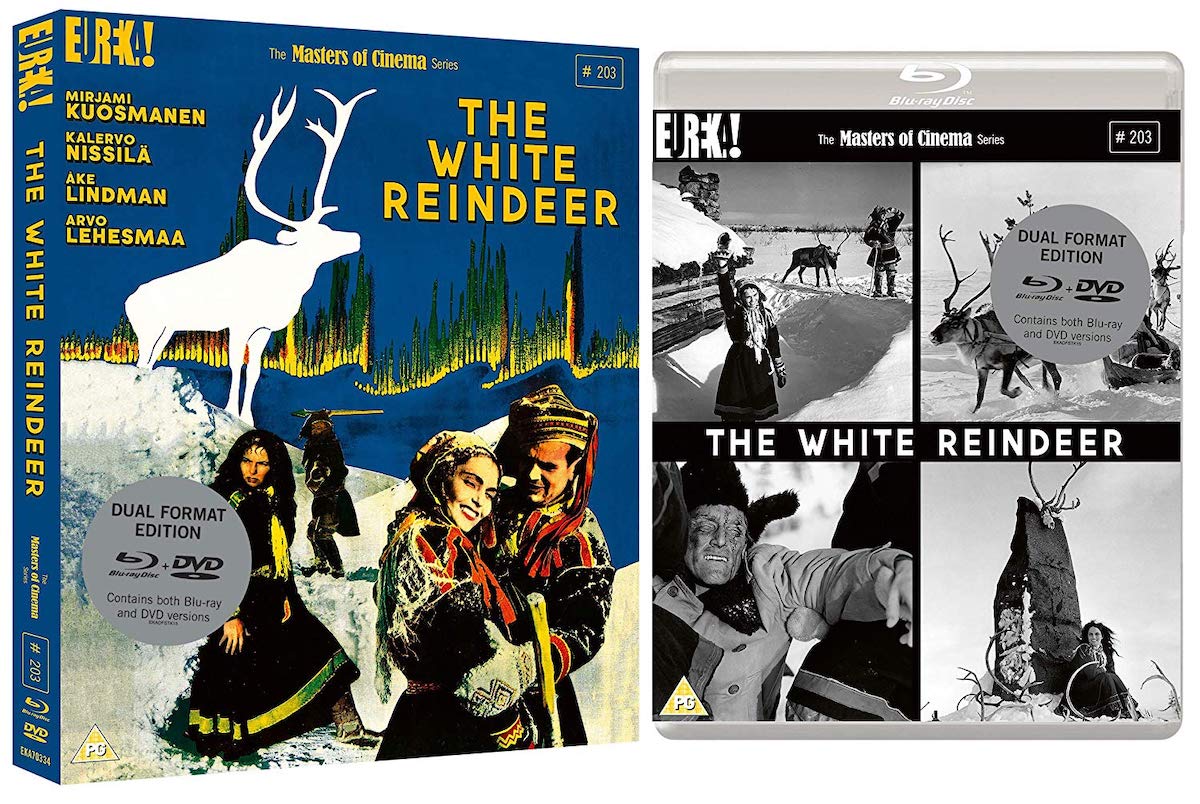 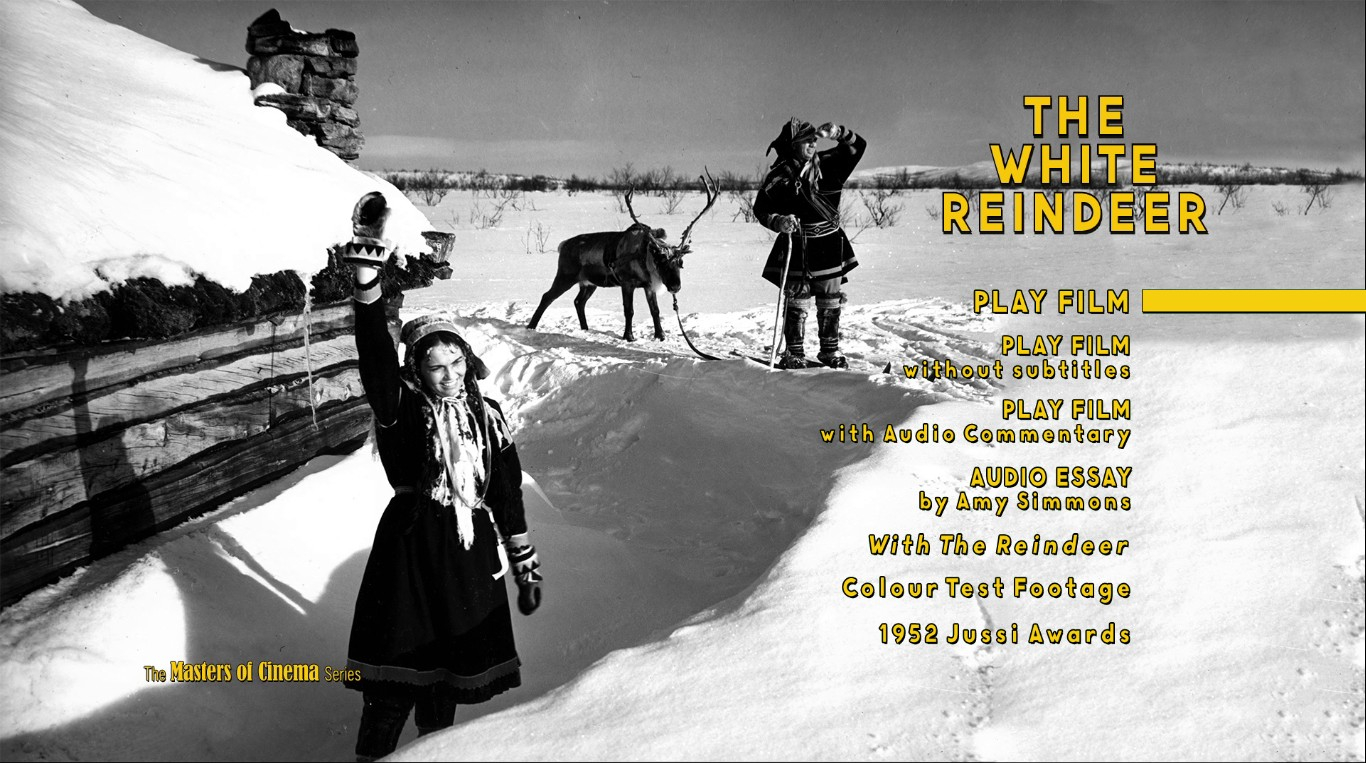