All of the films produced by Val Lewton in the 1940s display a particular kind of horror. Not gothic melodrama, nor scare-packed monster movies. His were subtle and understated horror films more interested in building a sense of terror than anything else. His frequent director was Jacques Tourneur, and the greatest product of their collaborations was undoubtedly Cat People (1942), now released by Criterion.

When Lewton headed to RKO, where he made Cat People, he was handed a mission to create low-budget horror films that could go toe to toe with Universal’s monster movies. Universal rarely spent less than $1 million on their films, whereas Lewton spent just $130,000 on Cat People. The film went on to gross $4 million, despite RKO’s reservations. Those reservations were hardly surprising if RKO thought they’d asked for a conventional horror movie. Instead, we have a slow-burn study of a character’s torment and the supernatural manifestations of her ailment. 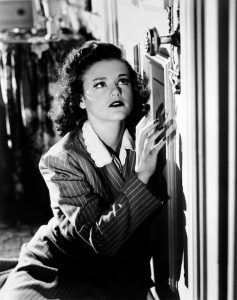 The film’s opening scene sees Irena (Simone Simon) standing outside the panther enclosure at a zoo and sketching the prowling animal. Unhappy with her effort, she tosses the paper towards the bin, misses and is inadvertently introduced to the man she’ll soon marry, Oliver Reed (Kent Smith). The scene, like the entire film, manages to be both to the point and somewhat elusive. There’s no hanging around, the flirtation is quick and to the point, and the cat that fits in between Irena and Oliver as they talk is a symbol for what will stand between them for the duration of their marriage.

Fearful that she’ll turn into a big cat and kill her lover if they ever kiss, an immovable wedge is driven between them. As well as Lewton and Tourneur, DP Nicholas Musuraca’s fingertips are all over Cat People. It’s a film of shadows against walls, as well as shadows that conceal the very beasts that might want to kill us. One of the extras on this disc sees John Bailey talk about the look of the film, which he describes as being constructivist because of how shapes and blocks of light are incorporated by Musuraca. It’s certainly one of the most beautiful Hollywood products of its time.

Maybe the editor, Mark Robson (who’d later become a director himself), should also be praised. The rhythm of the film, along with the lighting, is often what generates the terror and the tension rather than anything sighted within the frame. Now suspecting another woman of having an affair with Oliver, Irena tracks her through the streets at night. This offers a perfect example of the way cutting is used to build tension as characters walk through shifting patterns of light and dark created by streetlights. We see the whole sequence at street level, viewing nothing but their feet and hearing the constant and quickening sound of heels on the pavement.

Cat People is all about Irena and her isolation. From this point in history, it looks and feels more like a study of mental illness and its impact on one woman. The use of shadows and humans that become beasts are both externalised ways of displaying the internal turmoil and Irena’s emotional state of mind. There’s a lot going on in this cheap, 73-minute movie. The highlight of the extras included on this disc is Kent Jones’s feature length documentary, Val Lewton: The Man in the Shadows (2007), which looks at his life and work in Hollywood, narrated by Martin Scorsese. 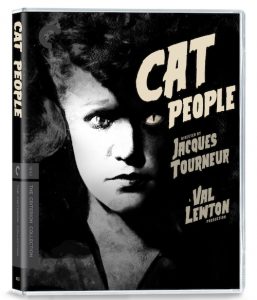