I’m pleased Jonathan Nolan and Lisa Joy had a few surprises up their sleeves, because “The Bicameral Mind” took a long time confirming a fan theory that’s been swirling around for months. A surprise only to casual and unobservant viewers, William (Jimmi Simpson) was finally unveiled as a younger Man in Black (Ed Harris), so his storyline was indeed just a fond memory Dolores (Evan Rachel Wood) had been clinging to in a confused state—the poor girl unable to discern her 35-year-old memories from reality. Although it was still mostly a narrative device, as how could Dolores have knowledge of what William was doing by himself?

A slightly less popular theory also held true that Dolores was the mysterious Wyatt, as we learned Arnold (Jeffrey Wright) once merged her personality with a new ‘black hat’ they were developing for the park, and, with the help of her beloved Teddy (James Marsden), was ordered by Arnold to slaughter all Hosts before shooting her co-creator in the back of the head.

With questions being answered to a surprising extent during this feature-length finale, it was unfortunate the biggest ones weren’t more surprising. We can debate the pros and cons of TV-watching today, in which an internet hive-mind can unpick almost every narrative mystery, but I was relieved Westworld didn’t do anything illogical in order to subvert expectations.

I never quite understood what the MIB hoped to find at the centre of the Maze, that would be of any value to a human, but evidently he just wanted this world he admires to become a genuine alternative to reality by giving its robot population the ability to kill. It was fun to make this a desire of his, rather than a nightmare scenario many others would envisage it as. And despite initially being deflated when the ‘centre of the Maze’ turned out to be a buried children’s toy labyrinth buried in a grave, the MIB ultimately got his wish thanks to Ford (Anthony Hopkins) being backed into a corner… 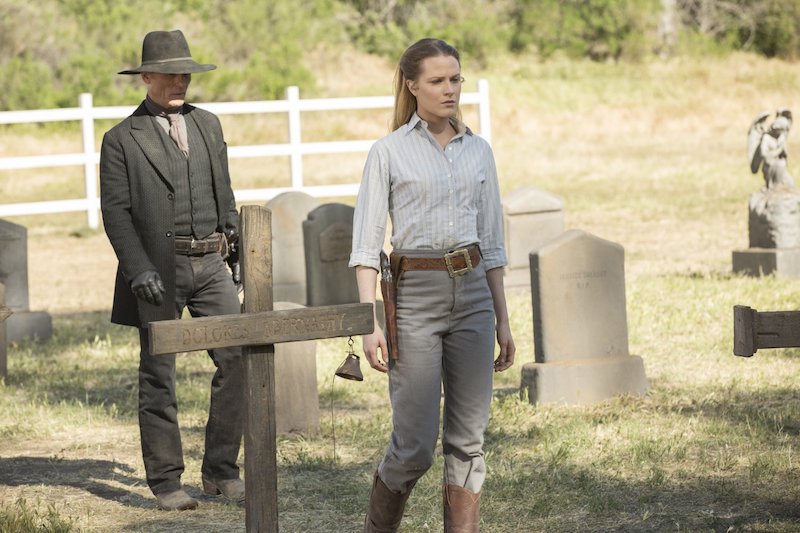 Aware that Charlotte Hale (Tessa Thompson) had managed to get him removed from his position as Park Director, following a Delos board vote, Ford’s dying act was to grant his Hosts their free will—and, in so doing, their lethality. But it wasn’t just his imminent irrelevance that spurred Ford into action, as we discover he perhaps wasn’t the total monster he’s been painted as for while.

After Arnold’s death, Ford came to realise his friend was right about the Hosts they were building (that it was cruel to force them into this slavery), but he’s spent decades working on an alternative way to grant them consciousness in order to protect themselves from humanity.

Ford’s long-game method just happens to involve suffering and pain, which he believes is the only way for consciousness to truly develop. So, Westworld was launched after Arnold’s death, and he’s followed a “cruel to be kind” ethos every since, in secret. Bernard and Dolores, in particular, have been stuck in cycles of pain and failure for so long because with every ‘loop’, taking them “through the Maze”, they get closer to breaking the constraints of their own programming. (Or, as the show presents it with the bicameral mind theory, hearing their own voice as their own thoughts—not that of their creator).

The strange thing about the finale is that it didn’t firmly connect everything Ford, Bernard and Dolores have been doing to the other major storyline with Maeve (Thandie Newton) being “awoken” and attempting to leave the park for good. In a show that’s often been confusing when it comes to the minutiae, Maeve’s story has always been the easiest to follow and enjoy—aided by less narrative trickery clogging your comprehension. It was a simpler story of robot mutiny, overthrowing the heinous humans, and the finale certainly delivered what one expected from a Westworld TV series—only with the shit hitting the fan behind-the-scenes, not within the park itself, which was a nice subversion of the movie.

Maeve “activating” her bandit lover Hector (Rodrigo Santoro) and his minacious accomplice Armistice (Ingrid Bolsø Berdal), to kill various technicians and guards, cut power to the facility, steal two machine guns, and generally raise hell, was a huge amount of fun to watch. Ramin Djawadi’s music has been great all season, but it was particularly tense and evocative during this action sequence, as the magnitude of what was happening played across the faces of the poor humans suddenly aware three Hosts are leading a massacre. 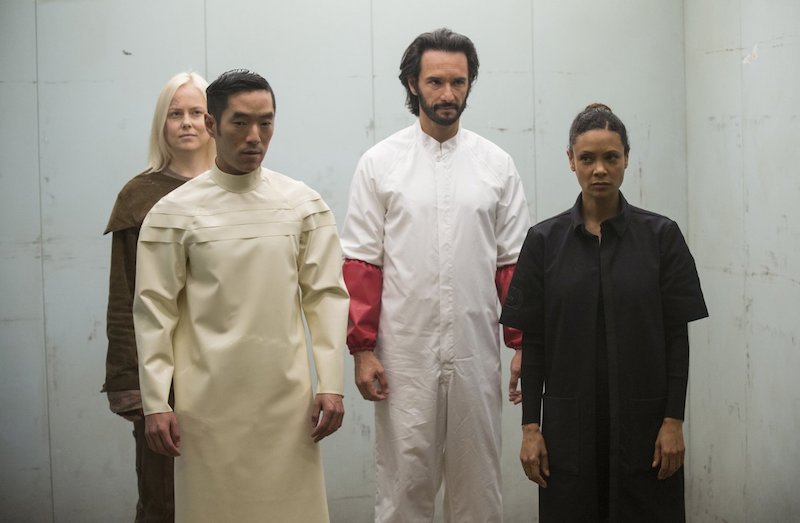 But how much of this was free will, and how much was prescribed behaviour? It was implied in the park sequences that Dolores’s story was just one corner of the new narrative Ford’s been creating, meaning her adventure this year wasn’t totally ‘off script’, and indeed culminated with a ‘death scene’ in Teddy’s arms on a beach… watched by an audience of Delos financiers seated on nearby deck chairs like theatre-goers applauding the resolution of a good play.

It was never fully explained to what extent Ford was guiding Dolores on her quest, although its fits with his intention to make the Arnold-coded Hosts suffer in order to achieve their consciousness. So this is likely what he was doing with Maeve, too. Ford was probably the person who had secretly coded Maeve to “escape” from the park, but when Maeve succeeded in leaving, getting onto a train about to depart for “the real world”, was it a triumph or a failure that the memory of her daughter kept her from leaving? Was it proof all Hosts are ultimately slaves to their ‘cornerstone’ memories, or was Maeve exercising free will in overcoming her “escape” programming to instead head back? I prefer the latter explanation, mainly because it pushes her character into fresh territory.

And what of season 2, which sadly won’t arrive until 2018? How will the story continue? Ford had Dolores kill him with a gunshot to the head, echoing the way Arnold died years ago, but not before he’s removed the “safety measures” of Westworld—so now the Hosts can kill the guests. The MIB looked to be in his element as a Host’s bullet caught his arm and drew blood, but it’s hard to imagine “business as usual” in the park ever again. All the guests currently inside are suddenly in mortal danger, many of the Delos bigwigs have been murdered, and they’re surely not going to be sending new guests inside, or patching up any Hosts who get damaged. If season 1 has been about seeing the systems of control, season 2 is going to be about the fallout of chaos. Will the technicians just have to let this scenario play itself out? Maybe Westworld will be quarantined as an ongoing emergency situation and hushed up, but the other parks will continue as normal (such as the ‘Samurai World’ we glimpsed).

Written By
Dan Owen
More from Dan Owen
Two seemingly dumb teens set off on a quest to prepare the...
Read More