John Hughes made his name writing the first two National Lampoon’s Vacation films (1983-85) and Mr Mom (1983), before segueing into directing his own script—Sixteen Candles (1984). That iconic teen movie has a few scenes that date its sexual politics awfully, but it paved the way for his superior coming-of-age films The Breakfast Club (1985), Ferris Bueller’s Day Off (1986), and the lesser-known Some Kind of Wonderful (1987). And amidst those landmark high school movies was Weird Science, Hughes’ zaniest project and a stylistic outlier in his filmography, although it’s become a cult for those who like teen movies doused in trippy madness.

1985 was a different time for geeks, a few decades before the mainstream caught up with why Transformers are cool. The ’80s were full of movies poking fun at bespectacled nerds, so Weird Science plays as a wish fulfilment fantasy for socially-awkward boys who lusted over girls in gym class. Hughes was in his mid-thirties at the time, but there’s no denying outcast Gary Wallace (Anthony Michael Hall) is analogous to him as an adolescent. The young actor became a good luck charm for Hughes, having already starred in National Lampoon’s Vacation (1983), Sixteen Candles, and The Breakfast Club months before Weird Science came out. 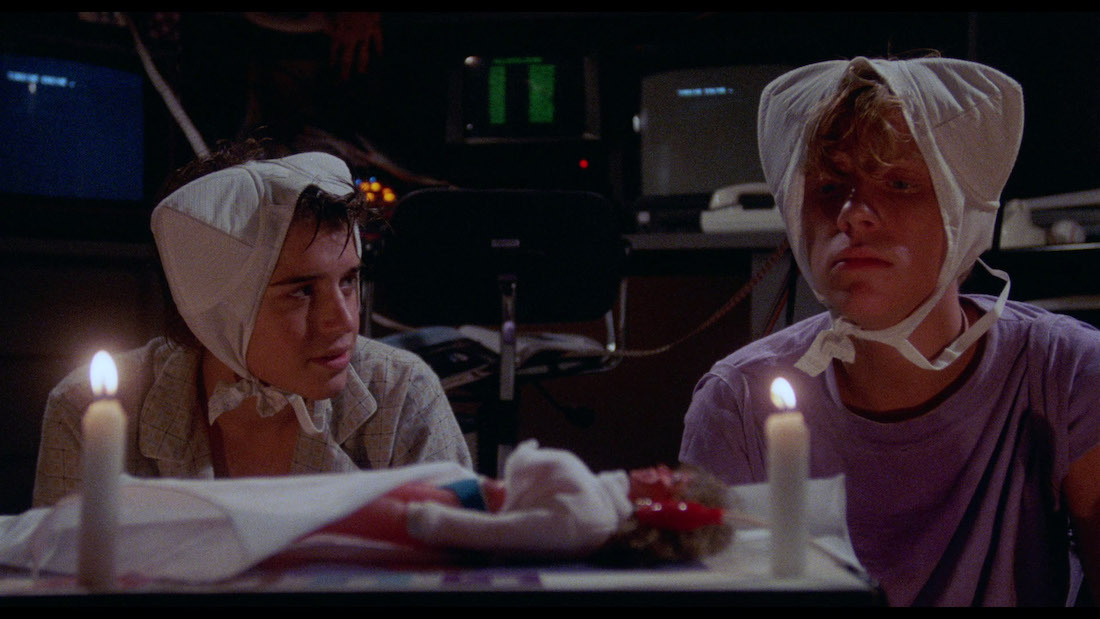 In this movie, Gary and his best-friend Wyatt Donnelly (Ilan Mitchell-Smith) play archetypical nerds who dream of a woman’s touch and to be embraced by their peers. Gary’s the louder and more confident of the pair, but he’s all mouth and no action, while Wyatt’s quieter and sweeter with a particular interest in computers. That comes in handy one evening when Gary and Wyatt are inspired to create their own girl after watching Frankenstein (1931), leading to a patently absurd sequence of them hacking into a government server to boost their computer’s processing power. All while wearing bras on their heads, feeding magazine clippings of glamour models into a scanner, and attaching a Barbie doll to jump-start cables during a thunderstorm. For inexplicable just-go-with-it reasons, Gary and Wyatt do indeed create a drop-dead gorgeous 23-year-old woman they christen Lisa (Kelly LeBrock), who appears to them through a pink haze in a doorway wearing a crop-top with tiny underwear.

We’re not more than 10-minutes into Weird Science by that point, but already it’s clear this isn’t your typical John Hughes movie. Home computers were a puzzle to the average person in ’85 (as it wasn’t until the late-1990s that the Internet started to enter most homes), which is why they were often used as a shortcut to telling incredible stories. Geeks were seen as lame, but they were the only ones who understood all that techie mumbo-jumbo. However, starting thermonuclear armageddon with a PC in WarGames (1983) is one thing, so it’s still a stretch to imagine two kids could create a woman in such an outlandish way. Audiences weren’t dopes in ’85. And why on earth Lisa’s birth reverses gravity for a neighbour’s pet dog is anyone’s guess! 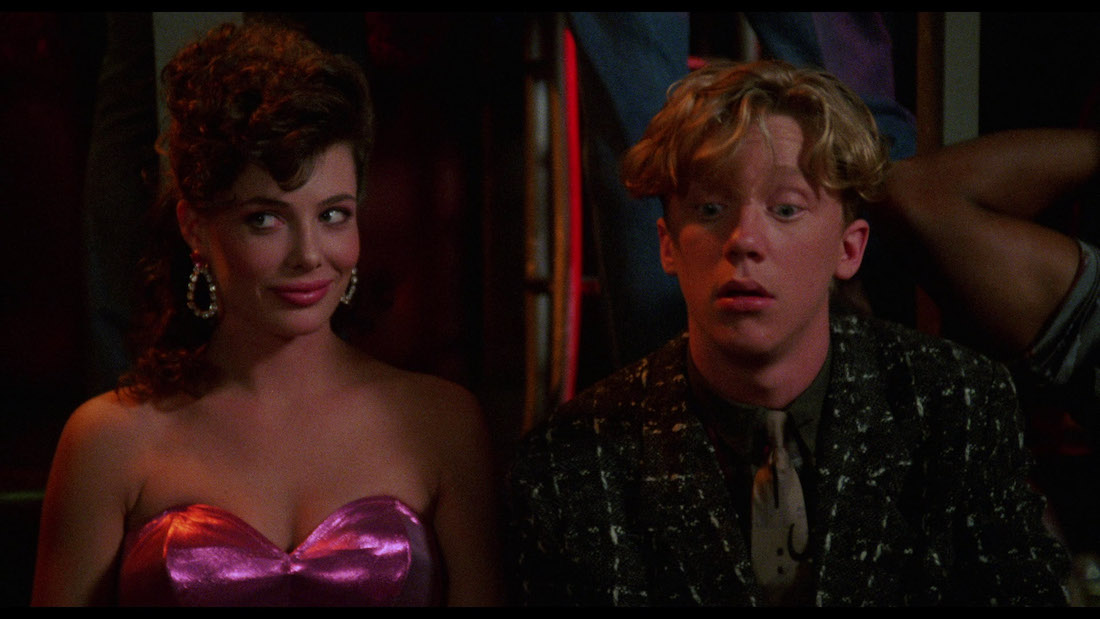 One can imagine a remake of Weird Science perhaps giving one of the two teenage leads a parent who works in a genetics laboratory where they incubate fast-growing human embryos, or something, as it’s now so preposterous to watch this “birth” unfold. But the B Movie-style insanity is key to the film’s bonkers appeal because there isn’t much tethering it to reality. How does Lisa conjure a Cadillac from thin air? Uh, weird… science? It’s puzzling how most of these problems could’ve been avoided by having the boys perhaps make a 16th birthday wish that comes true or perform some occult ritual—which I guess was a loose inspiration for the bra headwear and Barbie doll sacrifice. Hughes probably stuck more to sci-fi because of the story’s loose ‘modern-day Frankenstein’ pretensions and noted that pseudo-science had become a popular way to legitimate nonsense since Ghostbusters (1984).

What follows is exactly as one expects after hearing the synopsis, with Gary and Wyatt now best friends with a babe who adores them and will even let them shower with her. (They wear their shoes and shorts while cupping their crotches in the cubicle, of course). It’s never mentioned what Lisa thinks about her crazy situation—as a “newborn” woman beholden to the whims of two immature “Gods”—which is heady existential ground for any remake to delve into. In this story, Lisa is essentially a photogenic genie, which is a little uncomfortable at times (like when she lets Gary lick at her face to make a bully jealous), but it helps that Lisa’s no pushover and is clearly in charge of every situation. Although she’s so free-spirited it crosses over into derangement, as evidenced in the scene where she holds Gary’s parents at gunpoint to let him go to a party. And I’m really not sure what to think about the scene where Lisa teaches Wyatt how to kiss, as he tells her he’s not quite 16 and she’s apparently 23. Hey, it was the ’80s and it was a simpler time when adults could kiss underage kids? Does that cut it? Moving on… 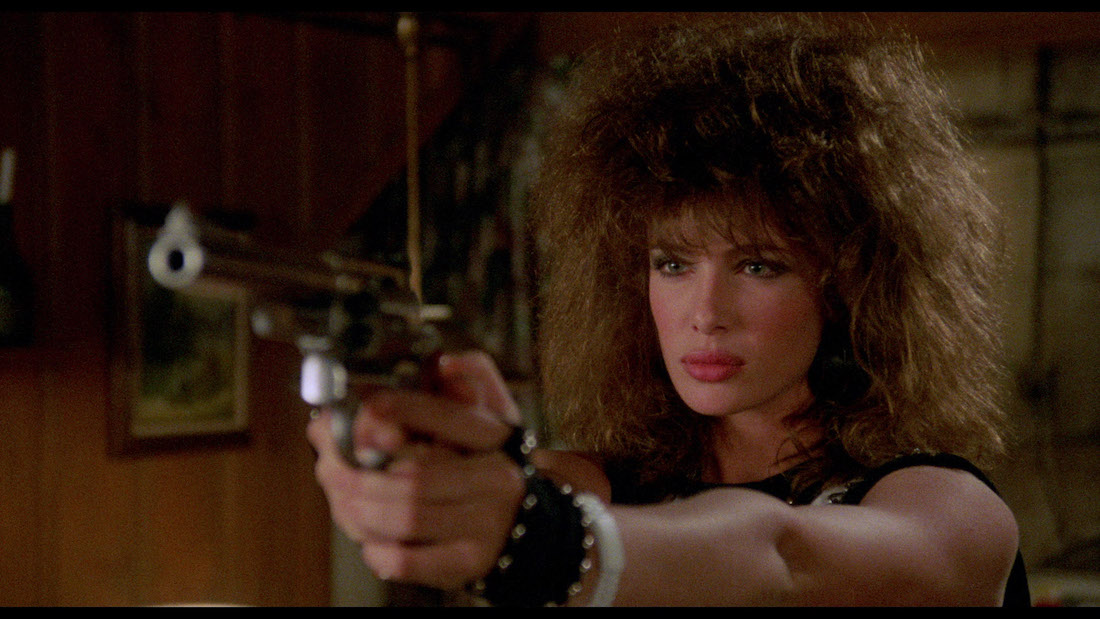 LeBrock’s Hollywood dream lasted six years—beginning as the object of Gene Wilder’s affection in The Woman in Red (1984), and ending as the love-interest in Hard to Kill (1990) alongside then-husband Steven Seagal. Weird Science is the undoubted highlight of her career. It’s politically incorrect how Lisa’s portrayed and utilised from a modern perspective, but LeBrock appears to be having genuine fun playing the living embodiment of a teenage boy’s wet dream. She delivers a few memorable lines (“what do you little maniacs want to do first?”), the camera eats her up in those eye-popping ’80s clothes and makeup, and at least Hughes knew to make Lisa a sex bomb who isn’t totally subservient. Things nearly go askew when Lisa reveals she does have to follow Gary and Wyatt’s every command, but luckily the boys don’t start pimping her out to their school friends. Thankfully this movie didn’t come out in 1975.

Weird Science was one half of a double-whammy for Anthony Michael Hall in ’85, following The Breakfast Club six months later, setting him up to join Saturday Night Live for one season. He remains SNL’s youngest cast member to this day. He then wanted to diversify and intentionally moved out of Hughes’ orbit (missing out on a few roles tailor-made for him), but none of his subsequent roles proved as appealing to audiences as his loquacious nerds. And then he grew up and is no longer recognisable as his teenage self. But he’s never stopped working and found a degree of success as the lead of The Dead Zone (2002–07) television series based on Stephen King’s novel. 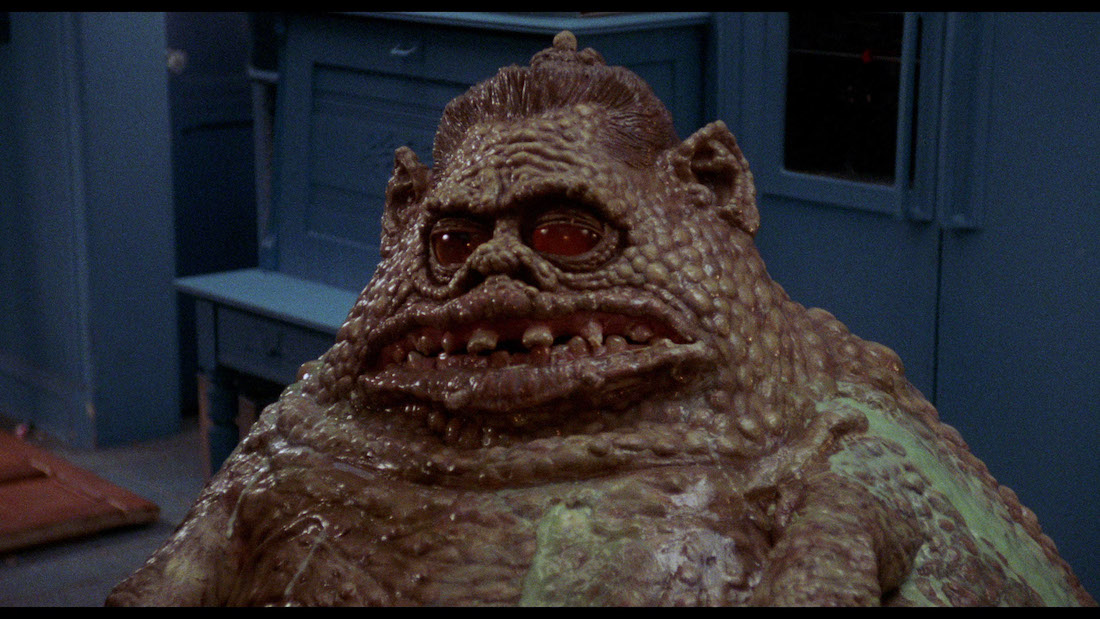 But if Hall’s career slid into obscurity, Weird Science was his co-star Ilan Mitchell-Smith only major credit. He was primarily cast because of his whiny voice, which sounds like it’s always on the verge of cracking, and it’s no surprise to learn this film didn’t open more doors for him. He’s okay as Wyatt but is constantly overshadowed by Hall and LeBrock, and there are times when his relative inexperience as an actor is very apparent. The scene where Gary and Wyatt have a slushie poured over them in a shopping mall is almost ruined by the fact Mitchell-Smith is clearly amused when his character should be angry or embarrassed. Or maybe Hughes should take the blame for not insisting on another take? Mitchell-Smith quit Hollywood in 1991 to go into teaching and raise a family, later publishing non-fiction books about the Middle Ages, while keeping his geek flag flying by writing about table-top gaming.

There are two other people in the cast it’s worth talking about. Bill Paxton appears in an early role as Chet Donnelly— a year after playing a street punk in The Terminator (1984) and a year before breaking into the big time as a cowardly Space Marine in Aliens (1986). Weird Science marks a rare comedic turn by Paxton and is one of the film’s best elements, with Chet a memorable pastiche of both a bullying big brother and a military-obsessed dullard. He steals the spotlight from everyone he’s around, thanks to his half-crazy smiles, the sadistic pleasure he gets from messing with his younger brother, and those ridiculous guffaws. 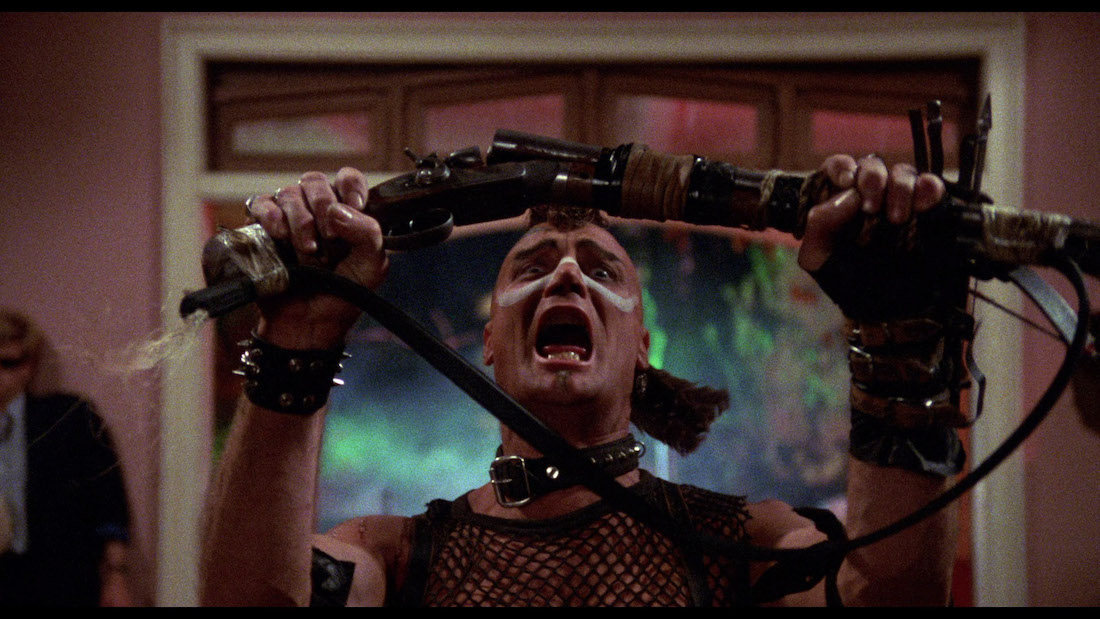 A babyfaced Robert Downey Jr. (credited as “Robert Downey”) also appears as one of the film’s two bullies, Ian, alongside Robert Rusler as his cohort Max. It’s ironic that one of his first notable roles was as a tormentor of nerds when, in adulthood, he’s become a geek-God for playing Tony Stark/Iron Man in the many Marvel movies.

Weird Science isn’t a boring movie or one to take too seriously, but its appeal has been replaced by a fascination for what it represents as a time-capsule of 1985 and its peculiar placement in Hughes’ career. His subsequent movies had their fair share of wacky moments, but none were as relentlessly bizarre as this film. Even stuff I don’t remember thinking was odd has become eyebrow-raising, like how Lisa seems to think it would be a fantastic idea to take the boys out for a night on the town… to a scummy Chicago dive bar mostly full of middle-aged black men. And then Gary seems to ingratiate himself by mimicking their patois, almost patronising them, but they don’t seem to mind it, and he doesn’t drop the act even when they get back home. 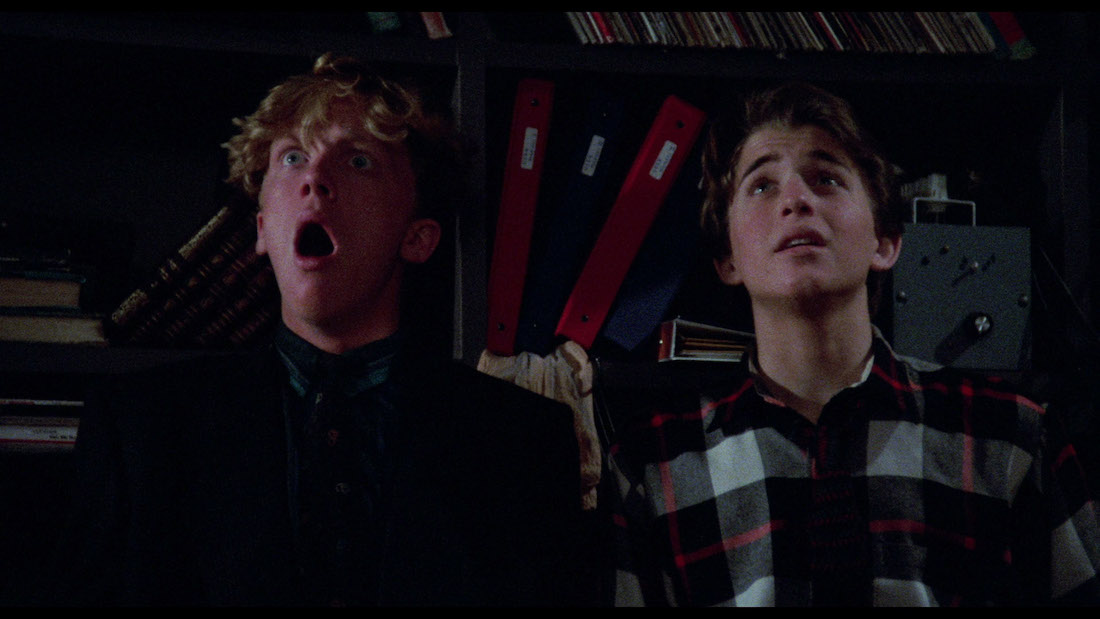 One can’t seriously watch Weird Science today and ignore how poor its treatment of women is, as they all exist to be objectified. Lisa is literally just that. And even when Gary and Wyatt inevitably meet two nice girls their own age—Deb (Suzanne Snyder) and Hilly (Judie Aronson), matched to them by hair colour—those characters are mere sketches that implausibly fall for their gawkish charms. And I really don’t understand the “joke” when Gary and Wyatt again retreat to the shower when Deb and Hilly are getting ready in the bathroom, only to peek over the top and see they’re now fat versions of themselves. Was that a hallucination?

Also, while Lisa’s goal is to try and make Gary and Wyatt gain maturity, perspective, and develop the confidence to find girlfriends for themselves, her “lessons” involve creating scenarios where it rarely seems like anything sinks in. Gary and Wyatt blunder their way through everything Lisa throws at them, with the one exception being standing up to “mutant bikers” who gatecrash their party (played by The Hills Have Eyes’ Michael Berryman and Commando’s Vernon Wells). But too much of their transformation rests on that scene. It would have been nicer to feel like these nerds were turning into better people over the course of the entire film, but I didn’t feel that way.

Ultimately, chalk Weird Science up as one of those cult classics you can’t quite enjoy the same way now many decades have passed. We’re in a very different place with depictions of women and geeks, although there’s just enough screwy nonsense in this movie to make it a diverting experience. Kelly LeBrock and Anthony Michael Hall keep it together, but it’s definitely one of the weaker entries of John Hughes’ glory years. I can see why he retreated back to more standard teen movie fare. There’s really no way to top turning Bill Paxton into a blob of shit. Such an awesome theme tune by Oingo Boingo, though—led by none other than composer Danny Elfman. 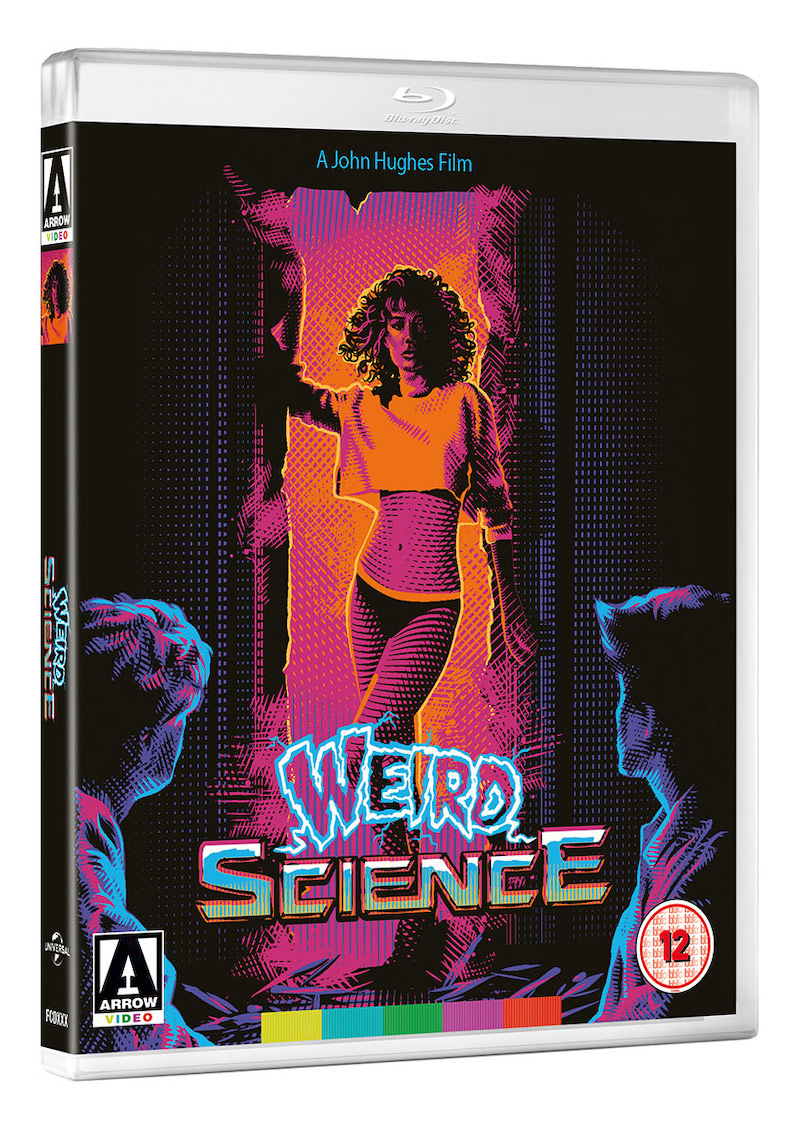 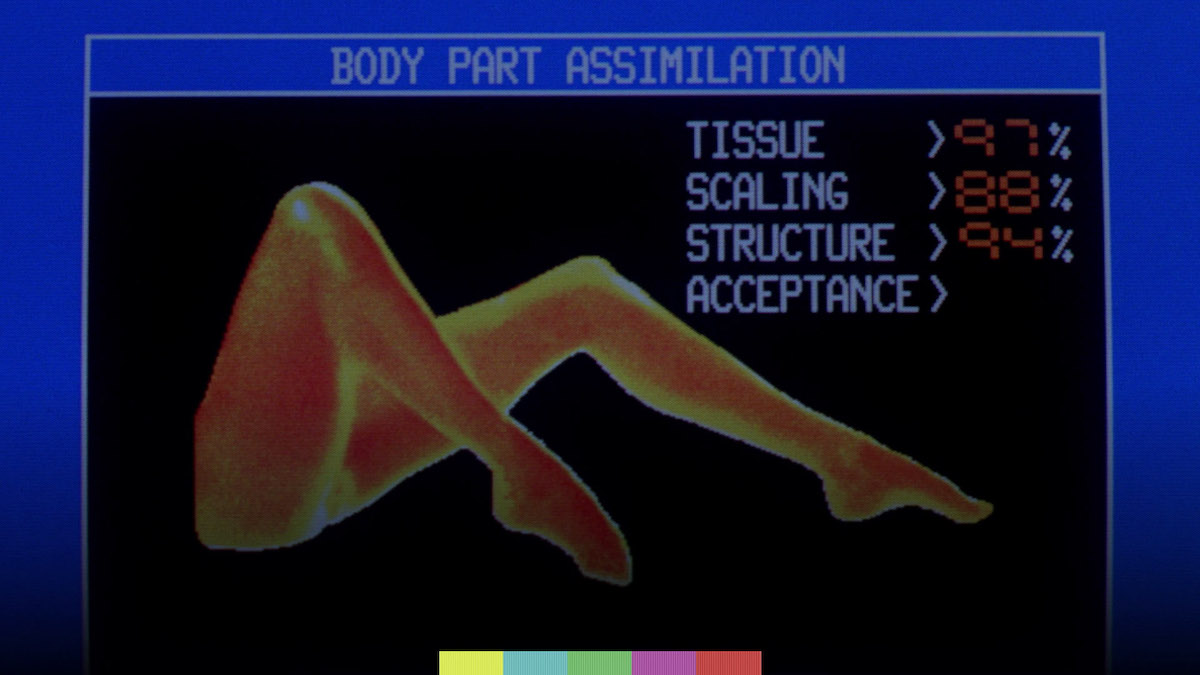