Everyone loved The NeverEnding Story, except Michael Ende, the German author of the fantasy novel it was based on. He famously hated Wolfgang Petersen’s adaptation and held a press conference to denounce it. Although it was only modestly successful in the US when released in 1984 (grossing $20M), over the past 35 years The NeverEnding Story has become a cult classic.

Maybe American audiences should’ve taken a leaf from Germany, where people turned up in droves to their local cinemas, making it the highest-grossing film of the year with another $20M gross. Part of its popularity was down to its status as a homegrown product, as most of the film was produced in Munich by native director Wolfgang Petersen (who had recently won the Academy Award for ‘Best Director’ with 1981’s Das Boot).

This movie had a number of missteps before reaching the big screen, however, as many directors and writers had taken shots at adapting Ende’s 1979 novel. In the end, only the first half of the book was turned into a useable screenplay. Ende fought them all the way, as he didn’t like what they had done to his story… and, in retrospect, one can see what made him so angry. His book was a casualty of classic Hollywood brush-up. In attempting to make it more palatable to general audiences, his story was reduced to a simpler hero’s journey and ignored the more complex aspects of Ende’s writing. Would this level of creative license for a book adaptation be acceptable now? It’s hard to say, but the end result didn’t seem to frustrate audiences at the time or since.

Another interesting fact: costing $27M, it was the most expensive film produced outside of the US and the USSR, which is impressive considering Star Wars: Return of the Jedi (1983) was released the year before and only cost $5M more to make. Where did The NeverEnding Story, a new film without any big-name stars, spends its huge budget? Well, a lot of the money went on its many practical effects…

The budget kept ballooning as more effects shots were added, resulting in only the flying sequences being composited with blue screen backdrops. This means that, believe it or not, Falkor the luck dragon, Gmorck the Wolf, and Rockbiter are all hand-made characters being controlled by a team of puppeteers. The famously tearjerking scene where the horse sinks into the mud? They trained a horse to do that stunt and it took weeks to perfect for the camera. Petersen has said having real-life puppets helped his young cast act more convincingly on-set.

The most important question is ‘does The NeverEnding Story hold up in 2019 when there’s such a proliferation of CGI in films?’ I’m happy to report that it does. There’s an immensely charming quality to this film, even though you can tell so many of the effects are puppets because you’re captivated by how expressive they are. In fact, the VFX perhaps helps to explain why The NeverEnding Story has become a cult classic. You can’t watch Atreyu meet Falkor or Morla the Ancient One without squealing with joy at these larger-than-life characters. And while Noah Hathaway (as Atreyu) had a tendency to overact, his performance doesn’t distract from the movie and you still feel his anguish when he loses his beloved steed Artax.

The premise of The NeverEnding Story also lends it added appeal for bookworms because it’s told through the perspective of a child reading a story, where his imagination seems to give the characters of Fantasia real life. It showcases how readers can get lost in a good book and end up going on an adventure where their own opinions of the plot are being taken seriously. For many children and teens, who grew up on fantasy literature, this is geek catnip. You can’t help feeling for reader Bastien (Barret Oliver) and cheering for him to stay in his safe space when you’ve just watched him get bullied and ignored by people around him. I can’t help admiring what a spectacular job Oliver did in this role, particularly because he spent 90% of the entire film stuck in one location.

The film also does well in terms of portraying the many characters that populate the realm of Fantasia. While some of them only have a few minutes on screen, they leave an impact and are intriguing enough that you want to know more about them. In the scene at the Ivory Tower, the film doesn’t depend on just one type of creature, as many different creatures appear and they all look like an actual figment of someone’s imagination. You want to spend an extra minute or two pausing the film just to see them all.

In terms of its plot and pacing, The NeverEnding Story falters slightly. The pacing is okay and the story never feels like it’s dragging, but it suffers from a couple of annoying moments. One might be able to suspend their disbelief the first few times Atreyu does something unbelievable, but it gets annoying after a while, especially when seeing it through more cynical adult eyes. And I’m not speaking about his ability as a child hero, more him escaping a laser beam by running quickly, or suddenly using an amulet to get directions. These are the moments when extra scenes describing the rules that govern Fantasia would have been very useful. I don’t think this was due to the uncredited editing of the US version by Steven Spielberg (who was friends with Petersen and did it as a favour), as that international version only removed snippets of scenes.

Overall, The NeverEnding Story deserves to be mentioned in the same breath as the other 1984 classics, like Ghostbusters and Gremlins. The production values are impressive, the characters are great, and the appeal of its hand-made style has only grown with time. As a film, it makes you feel like a kid again, excited by all the worlds you’re going to explore. And while it doesn’t scrape the surface of the book’s complexity, it’s definitely a film you’ll reminisce and want to watch if you’re having a bad day. 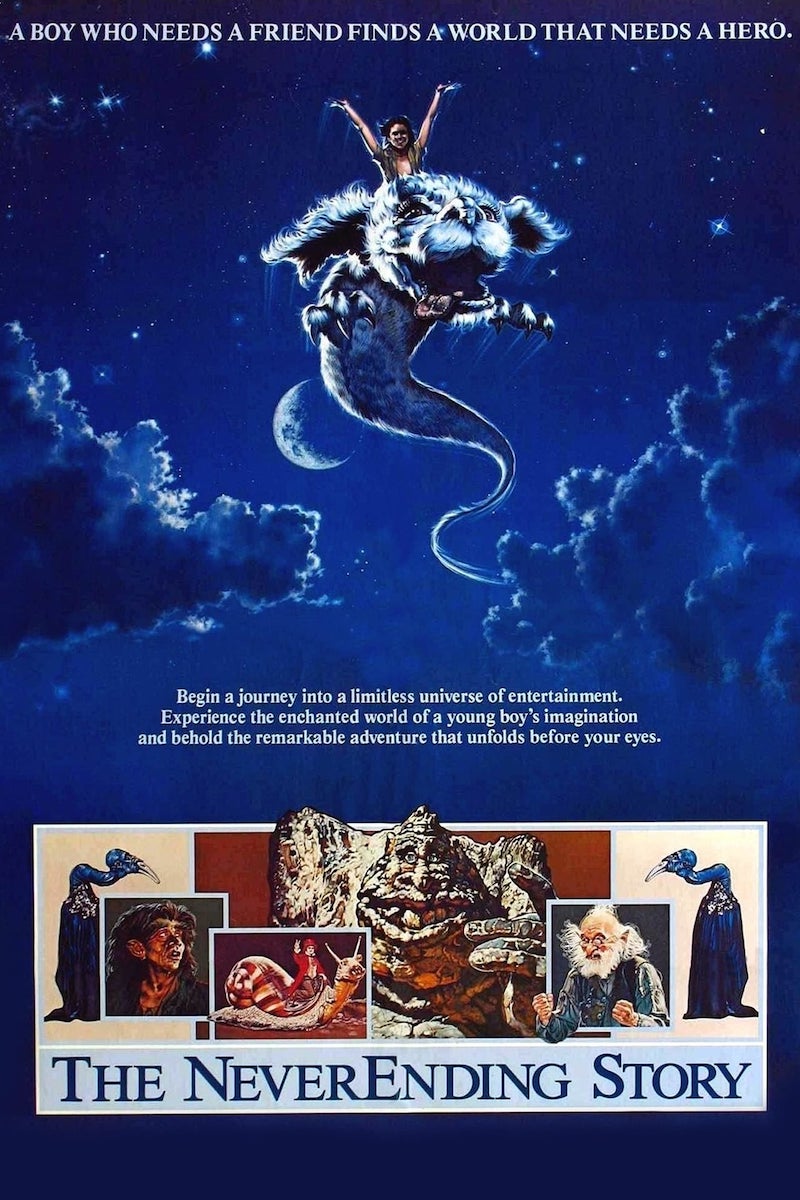