Playing on nostalgia, films such as American Graffiti (1973) and Grease (1978) had been hugely successful in the 1970s. However, in the 1980s, teen movies had morphed into slashers such as A Nightmare On Elm Street (1984) or raunchy sex comedies like The Last American Virgin (1982). But while most of the others asked audiences to laugh at hormonal teenagers, writer-director John Hughes asked us to laugh with them. Acknowledging their awkwardness and angst, Hughes wrote adolescents with deeper emotional range.

John Hughes is one of the most influential filmmakers of the past several decades. His contributions as a writer-director-producer have created many beloved classics. Starting his career writing for National Lampoon magazine, he turned his hand to screenplays including Mr Mom (1983) and National Lampoon’s Vacation (1983). Owing to their success, Universal Studios gave him a three-picture deal. Sixteen Candles (1984) marked his directorial debut and it’s where he found a cliche-breaking formula. He took the genre away from raunchy sex jokes and towards something closer to reality, eventually crowning himself king of the teen comedies.

Taking place over 24-hours, Samantha Baker (Molly Ringwald) has the misfortune of having her 16th birthday the day before her older sister Ginny’s (Blanche Baker) wedding. With all the attention surrounding the bride’s nuptials, Samantha’s entire family forget about her special day as she heads off to school. Then, after an answered homemade ‘sex quiz’ falls into the wrong hands, she becomes convinced that high school crush Jake Ryan (Michael Schoeffling) knows she’s a virgin. Worse, she’s also attracted the attention of geeky Ted (Anthony Michael Hall), who makes a bet with his friends that he can win Samantha’s heart. 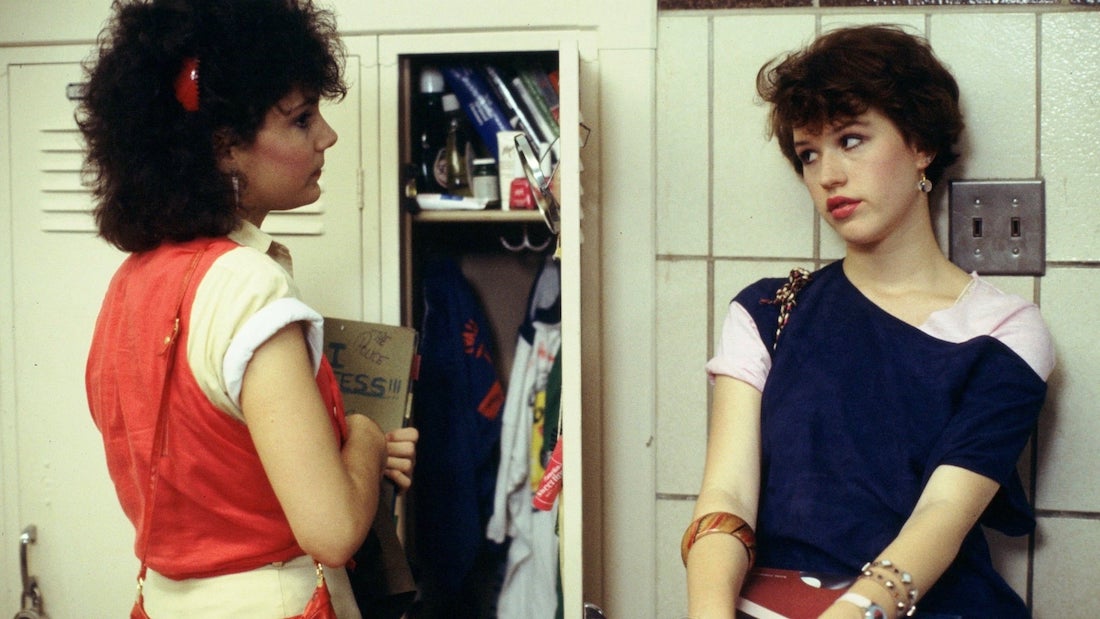 At the centre of this coming-of-age tale is high school sophomore Samantha, beautifully portrayed by the up-and-coming Ringwald. There’s never a moment where we don’t believe Samantha’s horror as her day goes from bad to worse. A teenager herself while shooting, Ringwald conveys the perfect amount of angst. Her discomfort, annoying little brother, and pining over a crush, are things each of us can identify with. Ringwald captures the torture school girls put themselves through at that age. Samantha desires childish jubilation for turning 16, whilst simultaneously wanting to be taken seriously as a maturing young woman, and the dichotomy’s wonderfully engaging. It shows just how much Hughes wanted to breathe new life into a stagnant genre.

This was the first of three collaborations between Ringwald and Hughes, as she later starred in The Breakfast Club (1985) and Pretty In Pink (1986). However, Sixteen Candles is by far their funniest effort. Ironically, Ringwald almost lost the role of Samantha to Ally Sheedy, her future Breakfast Club co-star. However, Hughes decided on Ringwald after seeing her marketing headshot and feeling inspired by her appearance. He placed her photo over his desk and wrote a first draft of the script with her specifically in mind for the lead. It paid off, as Ringwald’s charming personality makes Samantha one of the decade’s most memorable young characters.

On Samantha’s tail is Anthony Michael Hall’s brilliantly nerdy Ted. After impressing Hughes as Russell ‘Rusty’ Griswold in National Lampoon’s Vacation, Hall would likewise continue to work with Hughes until Weird Science (1985). However, as time went on he never felt as fresh, convincing, and naive as he does in Sixteen Candles. Hall dominates every scene he’s in thanks to his excellent comic timing, and it’s clear he and Ringwald were the director’s favourite muses. 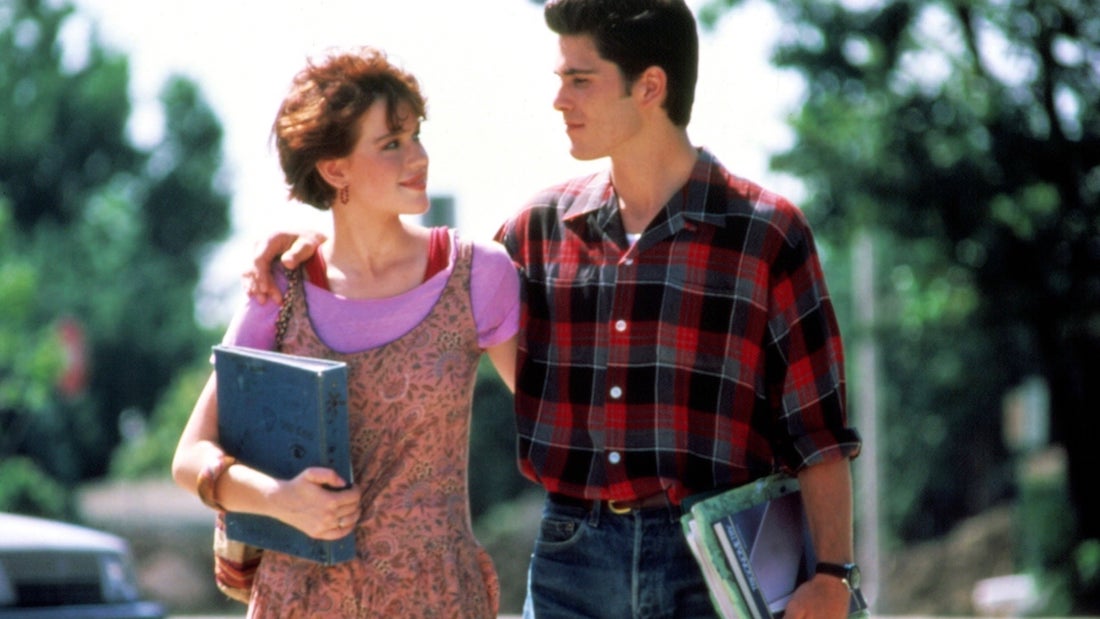 Using a unique structural style, the opening credit montage is essentially a yearbook of ’80s fashion, fads, and blooming teenage romance. Young couples display their affection by interlocking pinky fingers or resting their hands in each other’s back pockets. The frustration of opening a hallway locker is contrasted with a variety of flamboyant sunglasses that look like they’ve been taken directly out of the latest Vogue. A denim jacket decorated with novelty pins is partnered up with hair scrunchies. Even though style’s changed over the decades, Hughes makes the morning journey to school appealing and something every generation can relate to. Establishing the perfect playful mood he carries through from journey to school to within the corridors. These stylistic elements are what the director has become renown for and he places the audience in the middle of a fully functional school.

Whilst hardly a revolutionary screenplay, Sixteen Candles merges slapstick comedy with genuine teen spirit. Instead of introducing a sharp comedic edge to the production, Hughes cradles each of his characters with authenticity. There are several cherished scenes that make one truly appreciate Hughes’ talent as a writer. Samantha and Ted find themselves alone in the front seat of a car in the school’s auto shop having a heart to heart talk. They share their secret burdens, have several laughs and together they form a genuine bond. Ted begins to realise Samantha is more than just a sex object, and she finds herself reflected in the awkward geek with no hope of finding love. As it turns out they’re both lonely and in need of a good friend, and at the time this was a massive departure for the genre. Hughes gave this teenage generation a voice within Hollywood. His teens are riddled with crazy emotions, not just hormones. 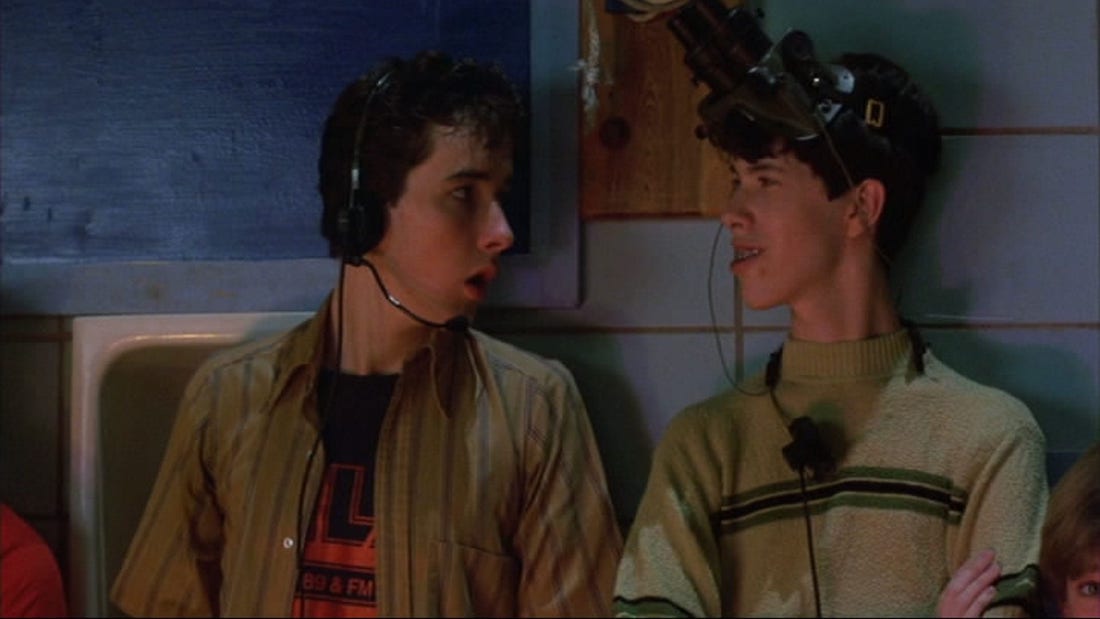 In hindsight, Sixteen Candles contains the honesty, wisdom, and charm that would eventually become prominent throughout Hughes’ career. A touching moment between heartthrob Jake and the geek Ted, reveals he’s every bit as insecure, if not more, than the nerd. At face value, Jake’s a two-dimensional love interest, but Highes adds a third dimension to this most basic of character types. Scenes such as these can only be crafted with hard work and thoughtfulness of a talented screenwriter. Previously Hollywood had thought teenage audiences of unworthy of that effort especially looking at their track record of teen comedies released prior, such as Losin’ It (1983) and Revenge of the Nerds (1984). Many ’80s teen comedies took reality one step beyond into the truly bizarre moments. With the exception of Long ‘Duk’ Dong’s antics, Sixteen Candles never feels disingenuous. Adding such heart and emotion to his scripts would become Hughes’ hallmark. The Breakfast Club is built around such scenes and even his OTT sci-fi comedy Weird Science has a heart.

For years Sixteen Candles was regarded as the must-see coming-of-age classic. However, times have changed since ’84. For all its greatness, after rewatching it in 2019 a wellspring of conversation comes from its subject matter. Gedde Watanabe’s (Mulan) comical but grossly stereotypical depiction of a Korean exchange student Long ‘Duk’’ Dong is greeted by the sound of a gong being struck every time he appears on camera. This “joke” would never make its way into a modern-day cinema and rightly so. Upon release, the character caused a huge backlash from Asian-American communities. However, unbeknownst to audiences, Watanabe was born in America and his Korean parents actually encouraged him to play this part because they found it humorous themselves.

Unlike many directors at the time, Hughes wasn’t afraid to explore the darker sides of his characters. One scene that was questionable even in the ’80s hasn’t withstood the test of time and is completely inappropriate for the #MeToo generation. It’s Jake confessing that his drunken, passed out girlfriend Caroline (Haviland Morris) is in his bed and he “could violate her ten different ways if I wanted to”. Hearing it now sends shivers down your spine, making you question what Samantha sees in her boorish crush. However, the ugliness doesn’t end there as he hands her over to Ted and sexual assault is then insinuated. This is an incredibly low point for the film and something that shouldn’t be casually overlooked. In 2018, Ringwald herself stated in an article in The New Yorker that the scene glorifies date rape culture and the over-sexualised ignorance of ’80s teen comedies. 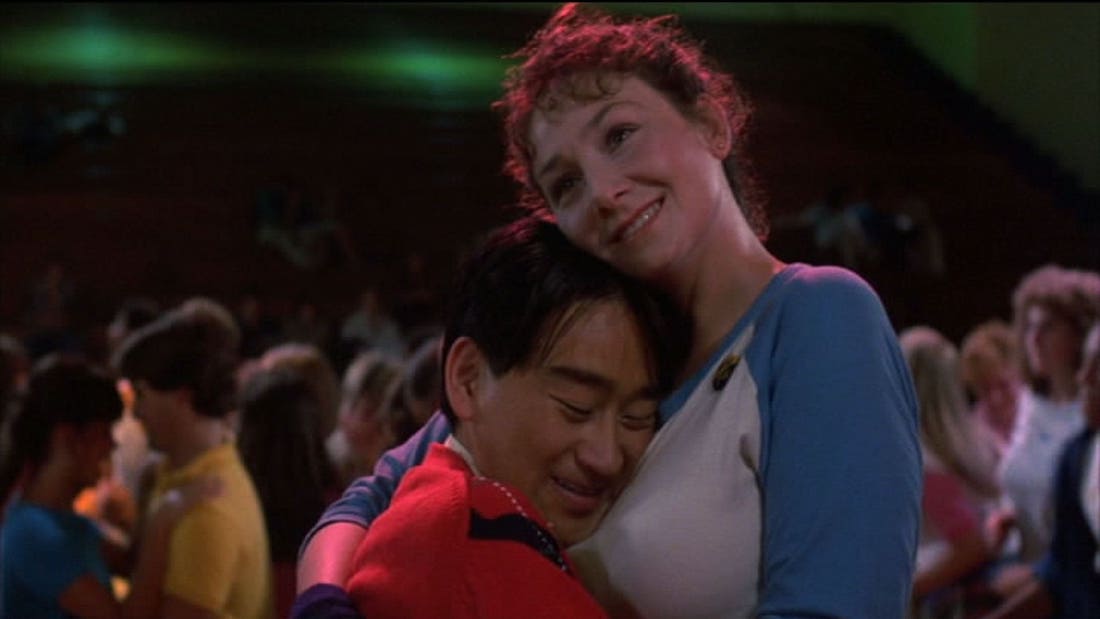 However, as crass as it may be, it would be a disservice to Hughes’ enduring legacy to say his work is often poorly judged. Ringwald also stated in the same article that “no one was writing about the minutiae of high school, and certainly not from a female perspective”. As Hughes’ directorial debut, the movie contains a mix of good, bad, and ugly. Sixteen Candles is a reminder that every feature has its flaws and directors make mistakes, but it was a voice reflective of the culture at the time. It was perhaps inevitable that Hughes would tap into his National Lampoon-style humour and lean into certain types of jokes that were popular at the time. Stereotyped foreign exchange students had been appearing in several productions of the ’80s, such as Kim Evenson’s Igna in Porky’s (1981) and Diane Franklin’s Monique in Better Off Dead (1985). Even Animal House (1978) contains an offensive rape joke. All we can do now is move forward and learn from past mistakes and make sure they’re never repeated.

Acting almost like a character itself, the soundtrack of Sixteen Candles is perfectly selected by composer Ira Newborn and Hughes. Several themes are used their comedic effect, such as The Twilight Zone (1959-64) theme that introduces Samantha’s grandparents (actors who coincidentally portrayed two characters on the classic series). The theme from Dragnet (1951-59) also introduces two geeks on the bus. However, Hughes had a love for British talent, as proven in Ferris Bueller’s Day Off (1986) when Mathew Broderick sang The Beatles’ “Twist and Shout”. And so, throughout Sixteen Candles, British New Wave artists feature heavily: David Bowie, The Specials, Spandau Ballet… and the credits even roll with the synth-heavy “If You Were Here” by The Thompson Twins. The choice of music not only elevates the characters and the narrative but it reflects the ’80s perfectly and plays almost like a Greatest Hits record.

Overall, Sixteen Candles is a signature debut that contains all of the key ingredients of a John Hughes movie. It’s obvious why he became a script factory in the ’80s and 1990s. He understood teenagers and gave the generation a voice that is still replicated today. Undisputedly Sixteen Candles is Molly Ringwald’s movie as she gives a star-making turn, while Anthony Michael Hall is also a joy to watch. By today’s standards, it strikes the wrong tone several times, it’s undeniable, but it will always hold a place in cinema history for kickstarting the ’80s teen movie genre. 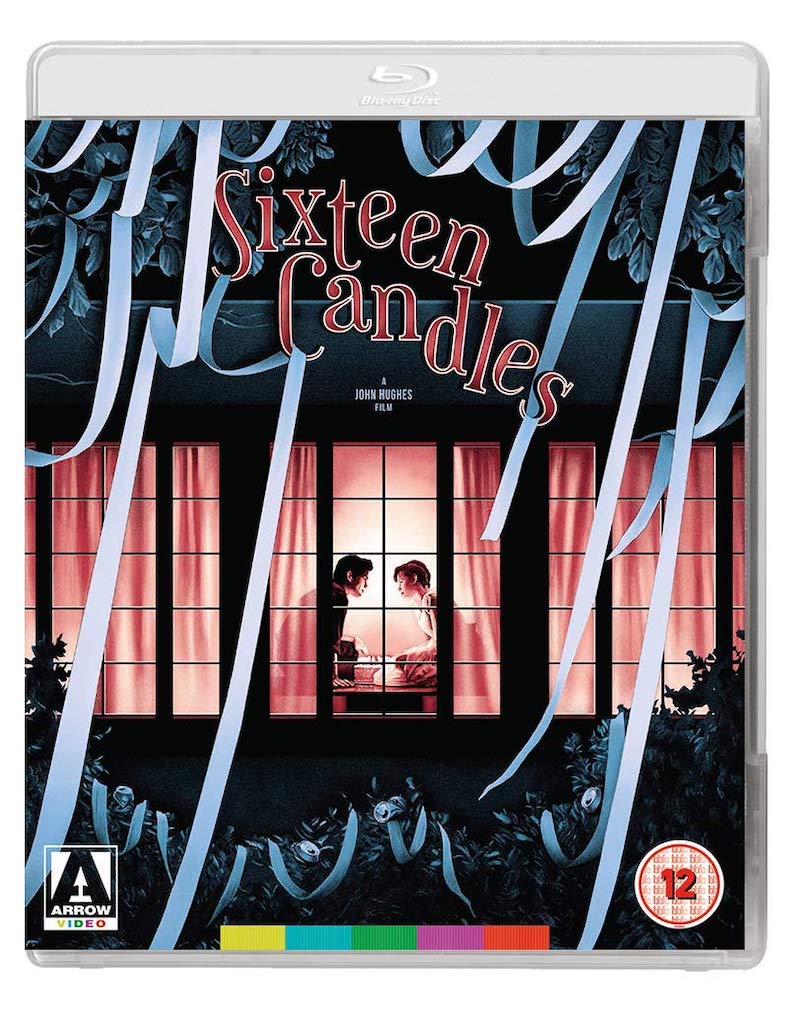 Arrow Films celebrate Sixteen Candles’ 35th anniversary with a new 4K scan of the original camera negative. Although the picture quality is a huge improvement over previous home video releases, the 1080p transfer is slightly troubled. In several interior scenes, there’s a noticeable amount of noise in the image, although it’s not enough to distract from the colourful 1980s fashions that benefit from a high-definition boost. There are plenty of colours and each one pops nicely to create an almost energetic feel. Flesh tones appear natural and facial complexions appear visible revealing the tiniest of details—such as the freckles around Molly Ringwald’s nose beneath her makeup. The new transfer helps minor background details become more visible, too, such as the posters hanging in Samantha’s room and scattered Talking Heads cassette tapes adding authenticity to the era.

The 5.1 DTS-HD Master Audio sound mix is what one expects of a film like this. The original mono soundtrack is modest and fits the feature perfectly, too. Dialogue is satisfactory with verbal exchanges always easy to understand, even during hectic cafeteria scenes. Most of the sound design comes through the centre channels to create a sense of presence within each scene. The excellent selection of songs on the soundtrack provides a welcome boost, broadening the soundstage further when they play. The music keeps to the centre speakers sounding crisp and well balanced. Contemporaneous music from David Bowie, Billy Idol, and The Specials provide an engaging experience alone. English subtitles for the deaf and hard of hearing are also available. There’s even an option to watch the ‘Theatrical Version’ or the ‘Extended Version’ (with an additional cafeteria scene) separately.