Daniel Liatowitsch and David Todd Ocvirk made this 1999 slasher film, hailed as a precursor to Saw (2004) by its small following, as both involve someone mutilating people with lethal homemade contraptions. But the plot of Kolobos better foreshadows My Little Eye (2002), and it’s clear the filmmakers were trying to put a contemporary spin on the giallo stylings of Dario Argento for the McTV generation. Even the main theme of William Kidd’s soundtrack is a barely-concealed copy of Suspiria’s (1977) rhythmic earworm.

A badly wounded young woman called Kira (future WWE diva Amy Weber) is found in a city street, muttering the word “kolobos”, and whisked to hospital for emergency facial surgery. The narrative then becomes one long flashback, explaining what happened to her, as we come to learn Kira was one of five strangers brought to an unassuming house to be filmed 24/7 for “a film”. After the group bond by sharing stories, dance to music, and watching low-budget slasher films (oooh, meta!), one of them’s sliced to death by a razor-blade gizmo in the kitchen. And when the house is suddenly locked down to prevent them from leaving, it becomes clear they’ve been lured into a trap for someone’s sick amusement. 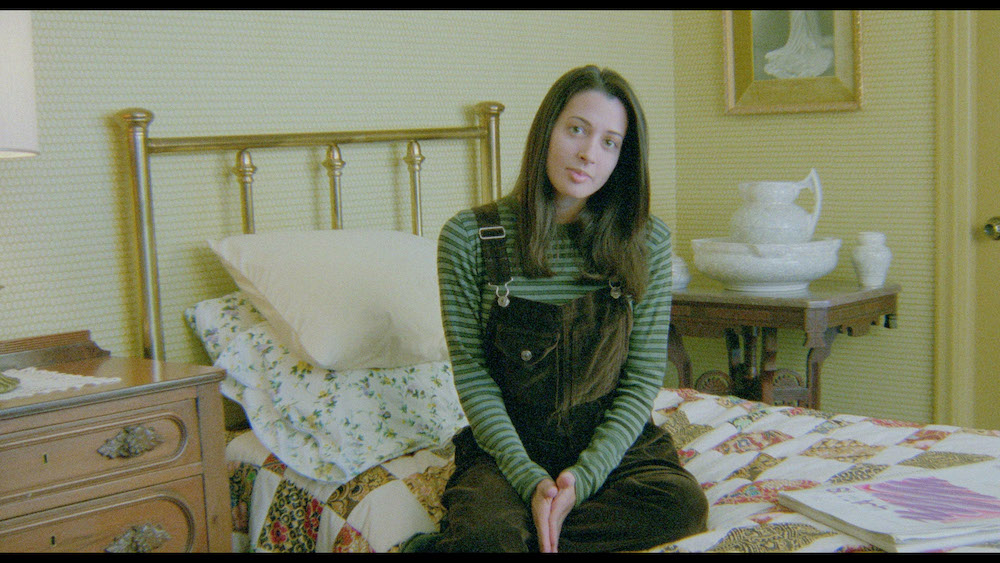 That sounds like a great deal of fun—imagine Agatha Christie’s And Then There Were None for  Big Brother fans —but a number of things prevent Kolobos from being as entertaining as it could have been. Low-budget indies are always a challenge to make for audiences used to seeing slicker productions, so it’s only fair to lower expectations in terms of the standard of both VFX and acting. This is the type of movie where blood looks like red paint (because it probably was) and the performances wouldn’t land anyone a one-line role in a soap opera. I make my peace with such things. But what frustrated me about Kolobos is that aspects of the film that could contend with the mainstream—the dialogue, the characterisations, the narrative—are also undercooked and forgettable.

While it’s true Kira is a far cry from the usual ‘Final Girl’ in slashers, and I appreciated a twist others hold up as evidence Kolobos is a little-seen gem, those two positives only get you so far. The twist, which I won’t give away, is something that sounds cool in retrospect, but the execution of it’s too dry to leave a big impression. What should be a jaw-dropping reveal is just an unexpected swerve at the end, but not one that leaves you desperate to rewatch the film with fresh eyes. I just wasn’t invested enough in the film to care once it upended a particular convention of the genre, no matter how interesting the idea is in isolation. 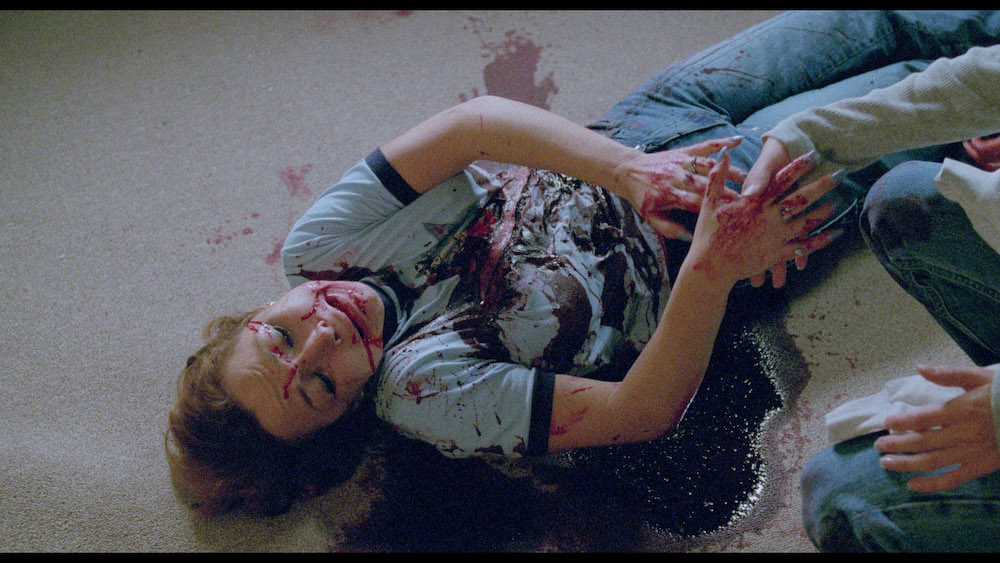 The limited resources also negatively impacted the production, because I couldn’t shake the feeling Kolobos was shot in someone’s house over a long weekend. The lighting’s uniformly bright for the most part, with the darker scenes speckled with grain and looking muddy, so the house never feels like the creepy boob-trapped hellhole it’s supposed to. Where’s the oppressive atmosphere? This is your parent’s house with blackout blinds on the windows. The filmmakers mention in the bonus material how their original cut of the film was only an hour long, so reshoots were done to extend and embellish what they had, which is evident in the slack pacing and redundant scenes. 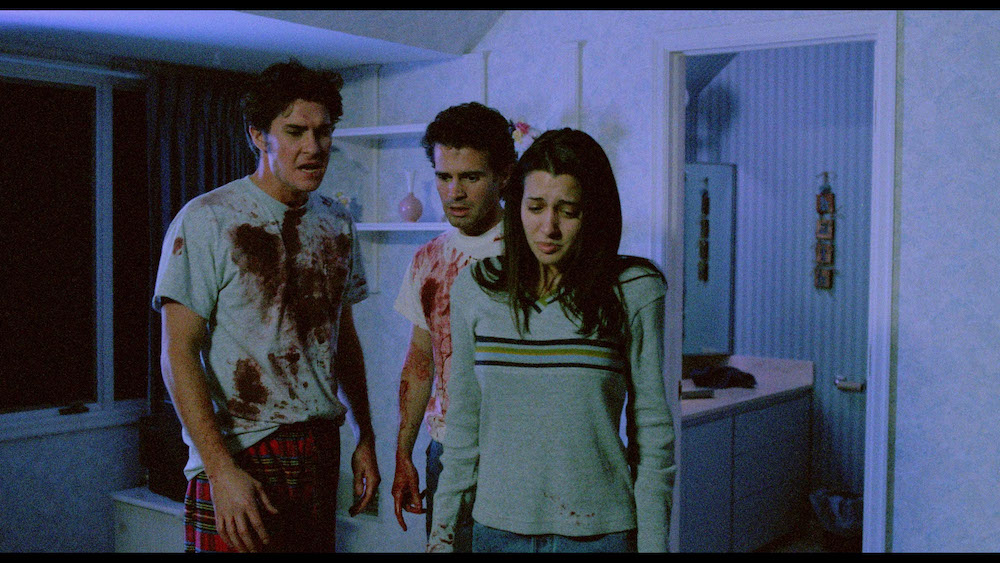 Once people start being killed, usually by sharp objects spat out of concealed panels in the walls, I wondered why nobody spends time checking for traps and destroying those they find. Or why, frankly, doesn’t everyone immediately go around the house demolishing all the video cameras—which are bolted onto the walls of every room and hallway. If the killer evidently enjoys watching his victims get slaughtered on CCTV, any sane person would remove them and make their enemy “blind” to what’s happening. It would make more sense if the cameras were hidden behind two-way mirrors - but the setup has everyone knowing they’re making “a film” together. Maybe it wasn’t obvious in ’99 that you’d choose to film people surreptitiously (even if they know what’s happening) because reality TV shows like Big Brother were still a year away. Yes, 1999 was that long ago now. 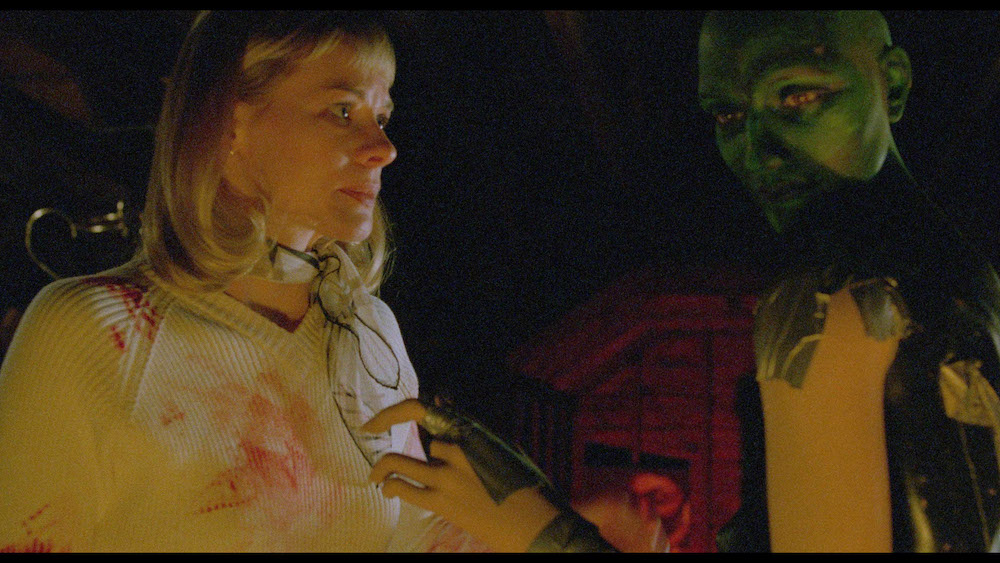 Kolobos would have been improved if it had been made a few years later, benefitting from the mainstream fascination with reality TV programming and the twisted possibilities of strangers being filmed around-the-clock. The tagline for the film is “Scream… you’re on TV”, which is also very misleading because it suggests events in the house are being broadcast far and wide, to audiences who might assume everything they’re seeing isn’t real, and… yeah, that sounds like a better movie already. I also don’t understand why the camera footage is shown as a grotty monochrome alive with video noise, but I suspect it’s because that was the best way to differentiate the images from the actual movie.

The various kills, when they begin, are functional but luridly coloured as another nod to Argento. Surprisingly, the most effective kill is the least inventive, thanks to a simple close-up of a table corner, which someone’s head is repeatedly slammed into by the killer. When a movie involving murderous booby-traps has a standout death scene that simply involves a black-gloved man and a piece of everyday furniture, it may be time to reconsider what you’re doing with the high-tech death traps.

Kolobos does improve as it ambles along (the first half-hour is the toughest to sit through), but the shoestring budget means the blood and gore always feel too homespun to be truly effective. There are fake heads and stomachs and costume quality facial prosthetics, which I could tolerate better if this movie was older, but 1999 was hardly an era where low-budget horror couldn’t be done in a satisfyingly schlocky way. 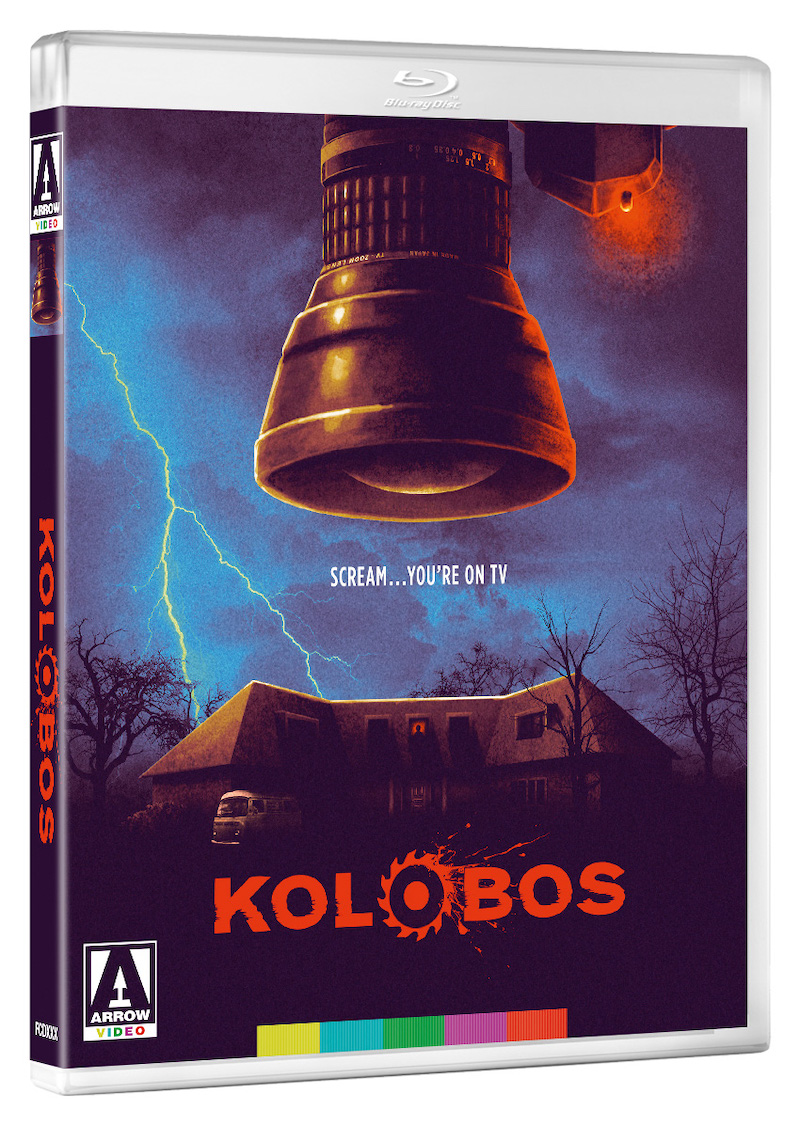 Arrow Video have restored the film by scanning its 35mm camera negative in 2K, downmixed here for 1080p Blu-ray that retains the 1.85:1 aspect ratio. The result won’t blow anyone away, as Kolobos remains a very cheap-looking movie with a lot of grain across the image and a washed-out colour palette. It has its moments during brighter moments, but those are rare once the action moves to the house’s dark interiors. Detail is nevertheless strong.

The audio track comes in two flavours: stereo and DTS-HD Master Audio 5.1. The latter is the best option, although Kolobos won’t exactly give your surround sound system a thorough workout. Dialogue’s a little thin and echoey, no doubt due to how it was captured back in the day, and only the music really brings the film to life aurally. 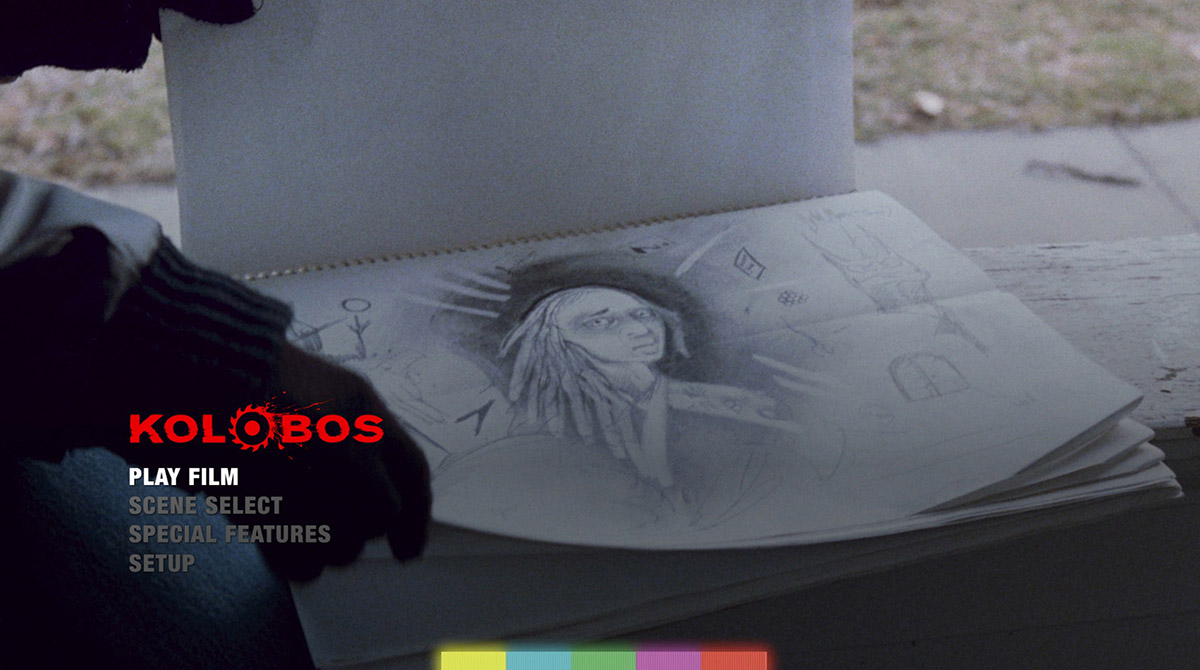