It feels like only yesterday horror fans were excited by news of AMC adapting Robert Kirkman and Tony Moore’s beloved comic-book series The Walking Dead. Nobody could’ve predicted the incredible success it’s achieved over the years, occasionally attracting 17 million viewers in the US. Now with a TV prequel, video games, action figures, and other assorted merchandise to its name, The Walking Dead has become one of the most successful genre franchises of the past decade. And it’s showing no signs of slowing down…

With season 8 due to arrive this October, there’s no better time to revisit the last season on Blu-ray, which was arguably the most controversial one of all. Focusing on a single story arc, the battle for supremacy between Rick (Andrew Lincoln) and Negan (Jeffrey Dean Morgan), we pick up immediately from season 6’s finale “Last Day on Earth”, which had a truly agonising cliffhanger as Rick’s team were overpowered by the Saviors and their frightening leader Negan. The final shot had Negan beat one of Rick’s friends to death with ‘Lucille’, a baseball bat wreathed in barbed wire, but the unfortunate person’s identity wasn’t revealed. It was a long wait between seasons just learn who Negan’s baseball bat connected with, but the reveal made for a hugely dramatic premiere. 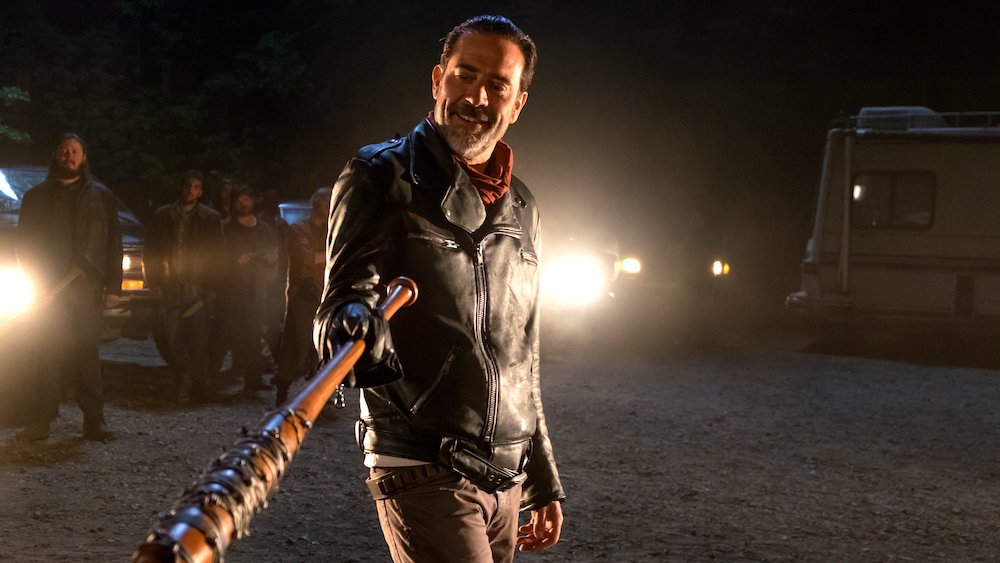 “The Day Will Come When You Won’t Be” delivered a rewarding pay-off, containing some of the most violent and uncomfortable scenes the show’s ever produced. Depending on personal tastes, the deaths in the premiere could be seen as gratuitous, but for me they played well in two different ways. Firstly, it solidified the fact Negan is a credible threat to Rick and his group; secondly, it gave the story added edge and real stakes. Too many shows are scared to kill their main characters, and there needs to be that sense of danger and that anything can happen, especially in a horror survival drama. I believe the approach taken with Negan’s controversial murders was the right one. If it was random and senseless violence it would be a different story, but it was a cold and calculated move that left a devastating and lasting impact on everyone.

Jeffrey Dean Morgan is a revelation as Negan this season; a mesmerising alpha male so relentlessly brutal and dangerous you can see why people would choose to follow him, through twisted admiration or outright fear. He’s not overused and doesn’t dominate proceedings… but while it’s only right he doesn’t suffer from overexposure, episodes where he’s missing do seem to suffer from his absence. 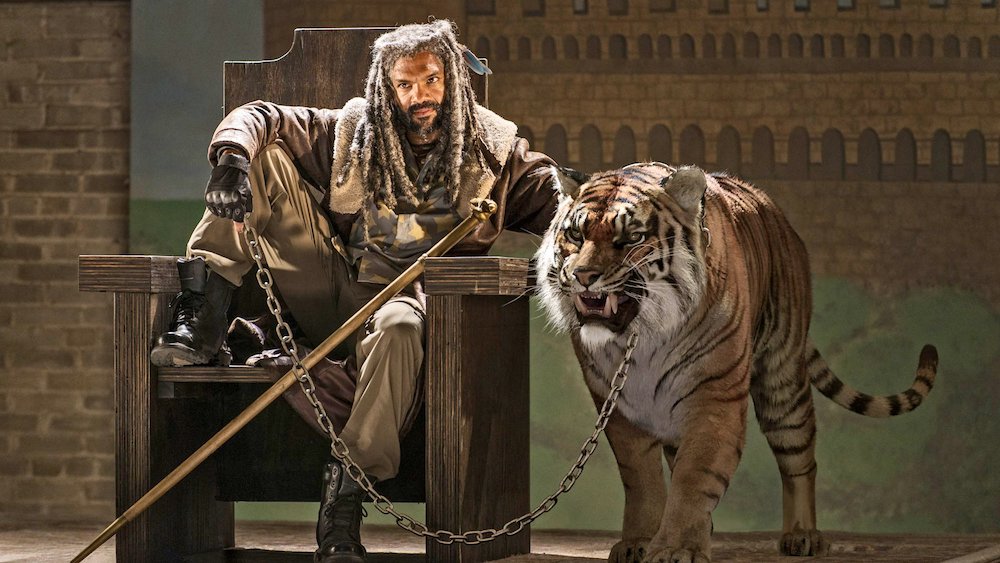 One criticism of the season is how many characters and locations there are. Early episodes are spent jumping from one place to another, telling the story of one particular person or group. “The Well” focused on Carol (Melissa McBride) and Morgan (Lennie James) at The Kingdom, introduced to King Ezekiel (Khary Payton) and his pet Bengal tiger Shiva; “The Cell” spent time with guilt-ridden Daryl, now a prisoner of the Saviors; “Go Getters” followed Maggie (Lauren Cohan) and Sasha (Sonequa Martin-Green); and “Swear” put the spotlight on resourceful Tara (Alanna Masterson).

While it was good to give everyone some character development, it sometimes cam at the expense of the overarching story and pace. Such problems are ameliorated with a binge-watch, but while it’s on broadcast TV you’re often waiting weeks to return to the characters or storylines you’re most enjoying. 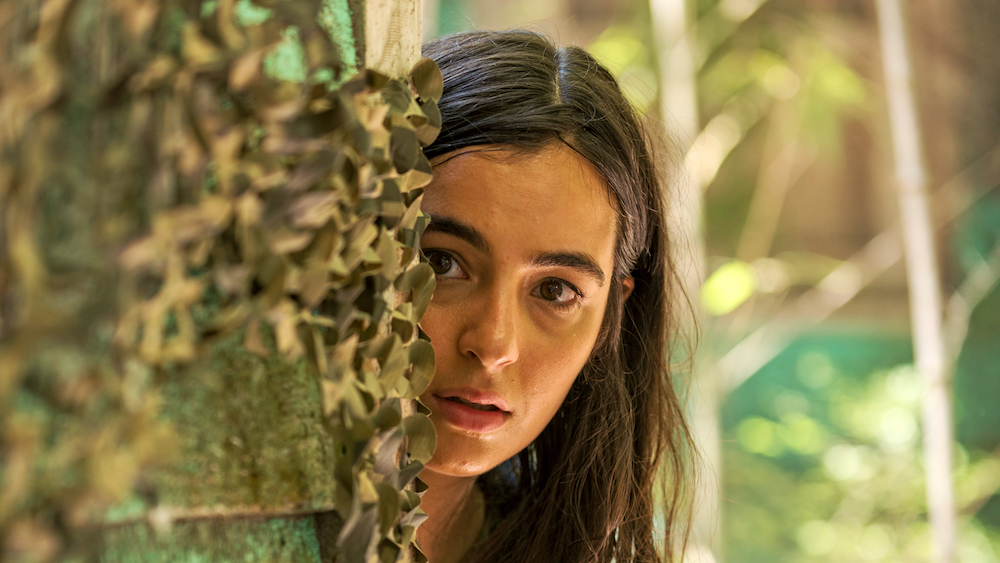 “Sing Me a Song” delivers one of the best episodes, as it puts the focus on Negan and Rick’s teenage son Carl (Chandler Riggs). The dynamic between this unpredictably bully and a tough boy, desperate to live up to his father, gave the story a lot of drama. Seeing how protective Carl is of his family, and how Negan will use Carl and his sister Judith to get to his rival Rick, was also very important information for later.

The mid-season finale, “Hearts Still Beating”, juggled many different locations and ultimately brought our core group back together. It’s the hour we’d been waiting for, as Jesus (Tom Payne) got time to shine, overconfident Spencer (Austin Nichols) had a memorable run-in with Negan over a game of pool, and seething Rosita (Christian Serratos) finally lost her patience with being stuck under Negan’s boot. We also saw Daryl, Rick, and the others reunite ahead of a more positive second half of the season, ready to mount a resistance. 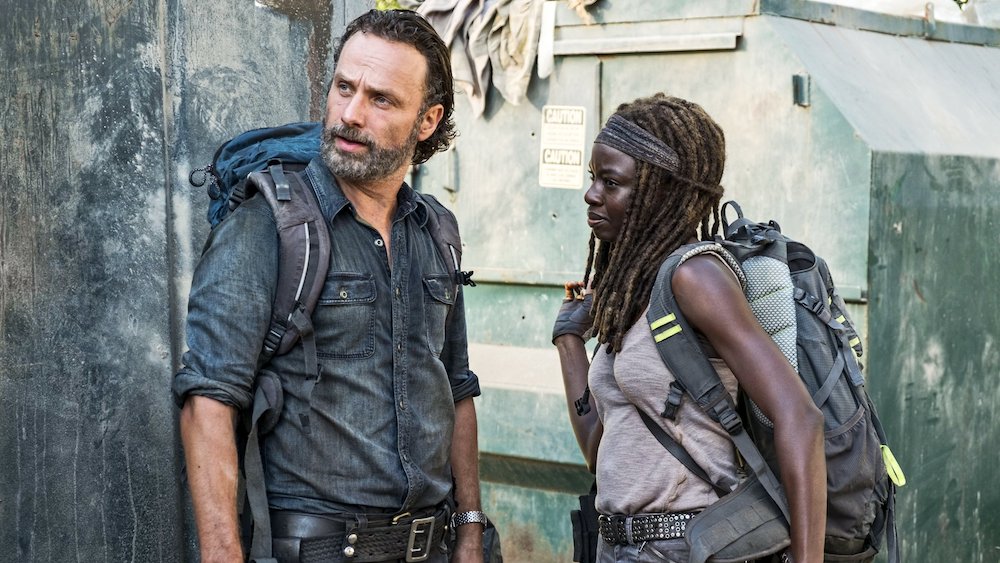 The season got a lot better once the main characters were less subjugated by Negan’s threat. Highlights include “Rock in the Road”, with a mass killing of walkers involving a steel cable and cars, and “New Best Friends” as Rick is introduced to The Scavengers. Here, our hero gets pushed into a pit with one of the scariest walkers ever created for the show, a rotting corpse covered in armour and sharp spikes. There’s also a hugely anticipated and emotional reunion between Daryl and Carol, that shows Reedus and McBride at their very best as actors. Two other characters given strong developments are Eugene (Josh McDermitt) and Dwight (Austin Amelio), with “Hostiles and Calamities” examining both men’s loyalties and their differing relationships with Negan.

One of the year’s most disappointing hours is “Say Yes”, which includes a fake-out death for Rick, which was very unnecessary considering the audience backlash to a similar trick with Glenn in season 6. It also includes a terrible computer-generated deer, one of a many strangely sub-par visual effects this year. Thankfully, “Bury Me Here” stages a return to form with Lennie James and Melissa McBride proving why they’re two of the best actors on television today; especially James’ portrayal of a troubled and internally challenged Morgan. This success continued in “The Other Side”, allowing Sasha, Rosita, and Maggie to deal with their inner demons and PTSD, taking steps towards getting their revenge on Negan. 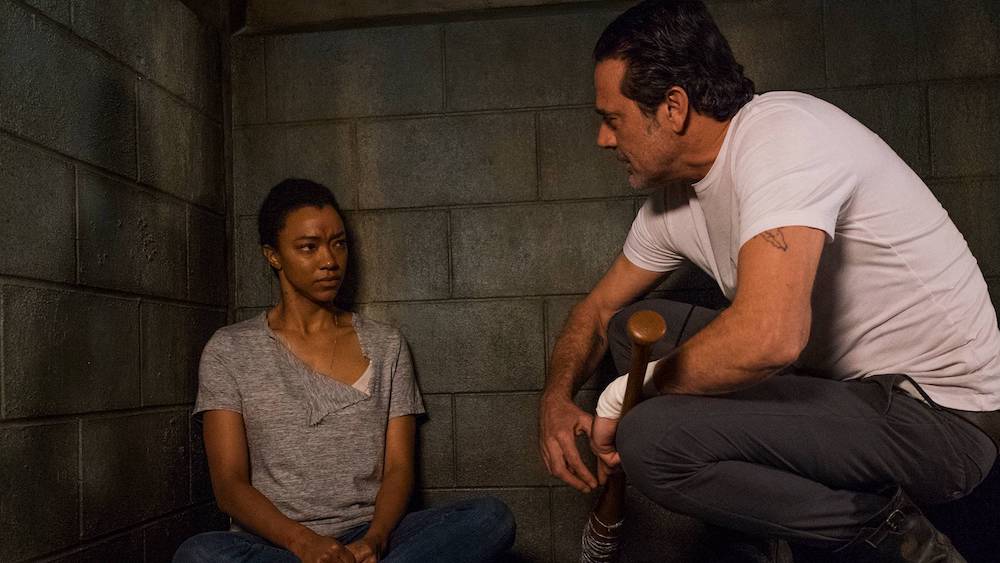 “Something They Need” continued Sasha’s struggles, being the most self-destructive and unsure of the three women. It felt as if she’s willing to do anything and isn’t concerned for her own well-being at this point. She actually becomes the focal point of season finale “The First Day of the Rest of Your Life”, being one of the characters who’s suffered most at the hands of Negan. With emotional flashbacks and numerous twists and turns in allegiances, this episode is an example of the show again firing on all cylinders. Martin-Green brings her best to the role, reminding us how capable she is when she’s not jostling for screen time amongst a big ensemble.

On the whole, The Walking Dead season 7 has moments of undoubted brilliance, capably performed by a cast who deserve better and more consistent material. There’s no doubting the talents of Lincoln, Reedus, McBride, James, Cohan, and new additions like Jeffrey Dean Morgan. The problem is always the same with this series: too many people, too many places.