By 1967, Lee Marvin was a bonafide A-list actor with the respect and professional stature to demand veto over scripts and how his scenes were edited in the final cut. When he signed-up to star in Point Blank, he famously deferred those contractual rights to a fledgling British director embarking on his first film in the US. John Boorman accordingly stepped up to the mark and, with plenty of input from his leading man, produced a visually arresting and gripping film that went on to become a milestone in the thriller genre.

Point Blank has a fairly straightforward plot involving a gangster known as Walker (Lee Marvin) who, fresh from a heist, is double-crossed by his partner in crime, Mal Reece (John Vernon). After shooting Walker, and leaving him for dead, Reece makes off with the loot. We join the plot as Walker miraculously comes round and finds himself in a cell on the newly abandoned prison island of Alcatraz. A series of flashbacks fill-in events, as we follow Walker on a journey of recovery and subsequent retribution, seeking his share of the money.

Walker soon discovers that his ex-partner is now in a relationship with his ex-wife, Lynne (Sharon Acker), but when he tracks her down Reece has already fled in justifiable fear. With the help of Lynne’s sister, Chris (Angie Dickinson), Walker eventually catches up with Reece only to learn the money has gone, used to pay off Reece’s debt to some heavy-duty gangsters. So, Walker insanely decides to retrieve his share of the take from them! 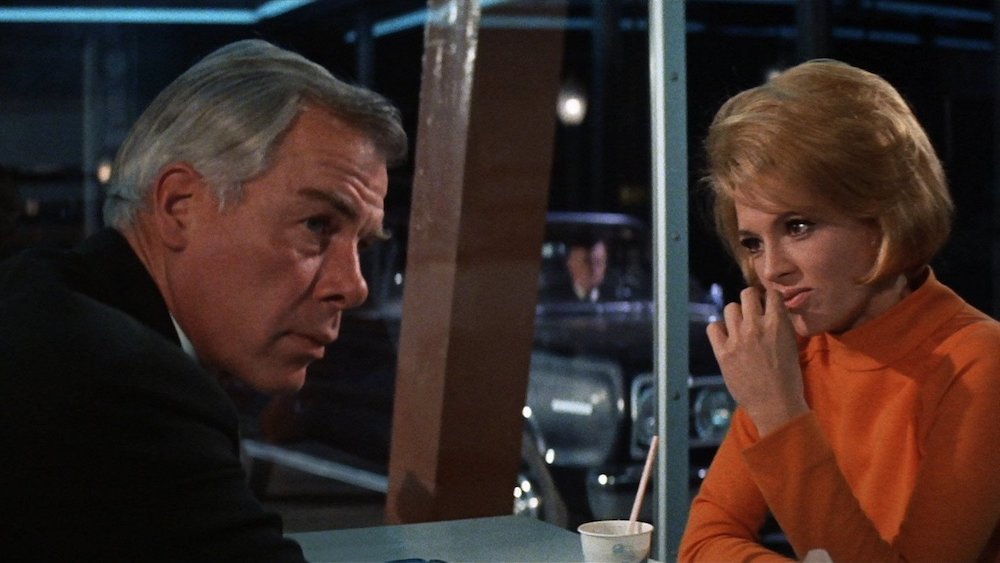 With another director at the helm, Point Blank may well have been a passible pursuit and revenge thriller; just another hard-boiled crime movie tapping into the noirish vein. After all, Marvin had left an indelible impression on audiences as a monstrous noir villain in Fritz Lang’s The Big Heat (1953).

Walker shares the attributes of many a movie monster, not least in his relentless pursuit of his personal obsessions, but also in the way he was betrayed by those close to him, and thus ‘created’ by the evil of others. Some readings of the film imply that Walker is a supernatural force, or a “ghost”. He can definitely be read as a revenant, having ‘returned from the dead’ at the beginning of the film. The character raises existential questions throughout. Are we driven along a predetermined path by forces of destiny? Is freewill an illusion? Are we defined only by the impact our actions have on the world around us, whilst motivations remain meaningless? Hmm…

The sequence when Walker walks down the long terminal corridor is–and, yes, I am fully justified in using the word here–iconic. The figure of Walker increases in size and import as he approaches the camera along the passage with no side doors, clearly represents his single-minded mental state. The rhythm of his footsteps speak volumes about the momentum he carries. He is absolute. Dead-set on his goals. The footfalls become hypnotic and the sequence segues into a montage showing Lynne doing mundane tings, make-up, beauty parlour, shopping… 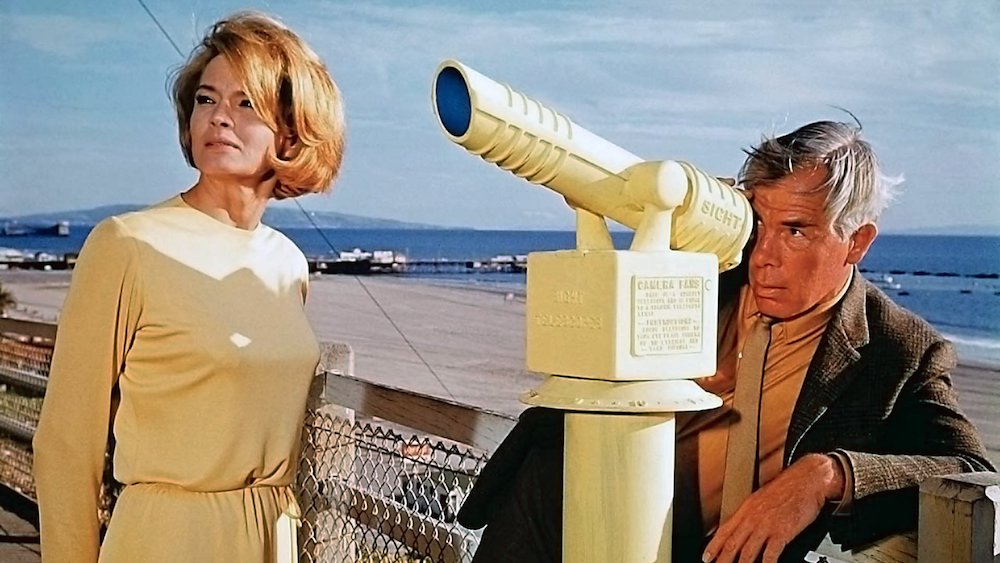 The cutting of the shots is dictated by the stark sound of the relentless footsteps, pushing the incidental music aside. The character now influences the medium he inhabits and the film’s soundtrack and editing become his embodiment. The rhythm continues like a metronome, or a ticking time bomb. Even as Walker drives and then sits in his car waiting, we still hear his footsteps symbolically approach. The two elements of this montage, the predatory pursuer and his quarry, collide in a startling scene that shocks us out of our hypnotic trance with the chaotic and violent interruption of a door bursting open, and then the rhythm collapses completely in a volley of gunshots…

Even when he does ‘nothing’, Lee Marvin carries the film. His performance is remarkable, relying on silence and physical presence for the most part. His stoic stillness becomes almost a blankness at times, through which brutal outbursts erupt like fireworks against a dark sky. He oozes pent-up violence throughout…

With the business suits, the same brooding demeanour, that monolithic screen presence, Marvin inhabits a character almost recognisable as Charlie Strom, the part he had played in Don Siegel’s The Killers (1964), in which he also starred alongside femme fatale, Angie Dickinson. He could be the same man, yet changed. Just as Patrick McGoohan’s Number Six in The Prisoner (1967-68) could be John Drake, from Danger Man (1960-66).

Interestingly, there is a similar iconic corridor walk, complete with the stark metronomic footsteps, in the opening titles for The Prisoner, which first aired just weeks after Point Blank was released. It also signifies a grimly determined outsider up against ‘the organisation’. As an aside, this same metaphor was recycled in The Suspicious Death of a Minor (1975), when rogue cop Paolo is seen walking the length of a corridor after he resigns to single-handedly take on a super-powerful, apparently unassailable, syndicate.

Walker bears parallels to another ‘new mythic’ icon of the ’60s in Clint Eastwood’s ‘Man With No Name’. With Point Blank, Boorman does for the gangster film what Sergio Leone did for the western with A Fistful of Dollars (1964). Both re-imaged American culture and created a new mythic rendering of some well-trodden themes. Leone’s Dollars trilogy balked against the countless reiterations of how the West was won, and re-invented a genre by approaching it as modern fable, hanging it on a central character that is more knight-of-the-round-table than cowboy. Boorman takes a similar mythic approach, one he would of course unashamedly explore in Excalibur (1981), and makes Walker a kind of anti-Arthur. Remember, he may be a criminal to begin with, but like the fabled English king, he is also betrayed by his right-hand man and his wife…

Prior to signing on to the project, both Boorman and Marvin had read the original script adaptation of The Hunter, a pulp novel by Donald Westlake (writing as Richard Stark) and agreed that, although it was terrible and needed a lot of work, it may be worth persevering with because the main character was so strong. When the film was greenlit, Boorman worked with writer Alexander Jacobs to extensively re-frame the story, stripping it right back, removing hackneyed dialogue, jettisoning secondary characters and any subplots, and changing the setting from New York to San Francisco and Los Angeles. In other words, he found focus.

They remained unsatisfied with the re-write when filming was scheduled to begin, so Boorman took Jacobs with him to continue with it as they shot, adjusting and improvising where necessary. Lee Marvin also had an important hand in adjusting the script and replaced much of the dialogue with physical acting. In one memorable scene between Lynne and Walker, Marvin chose not to say any of his lines, instead allowing Sharon Acker to either respond to obvious, yet unspoken questions, or to ask them of herself. The result is all the more edgy and effective for this inspired intervention.

This stripped-down intensity pervades the whole feel of the film. It has been described as minimalist, and certain key scenes feel like that, especially that iconic Walker walking sequence. The approach is certainly modernist, but the compositions are too rich to be considered minimal, some reaching a level of visual complexity that reminded me of a Michel Gondry pop video. It is as though Boorman took anything superfluous from any given scene, scrubbed it down to the essential narrative, then built it back up to make that scene as visually, and aurally, interesting as possible.

For example, two characters need to exchange information in a night club. So, the loud music forces them to lean in close, as if they are about to kiss, and shout their truncated lines. This pulls us in to a very tight two-shot. Then follows a fight scene in the club, so Boorman takes the action backstage, behind a projection screen showing the expressive faces of women intercut with what look like religious icons. This stage backdrop also provides the backdrop for the punch-up, and in place of the grunts and screams of the fighters, we hear the freak-out shouts and squawks of Stu Gardner performing “Mighty Good Times”. The thin fabric of the screen, literally screening the crime and violence behind the gang-run club from the public view.

Every exquisite sequence brings visual pleasure, with each shot meticulously composed, framed and cut with the utmost care and attention. The whole film looks sleek, stylish, and very European. Although this arthouse approach already had a foothold in European Cinema (Boorman quotes Alain Renais as an influence), it was something fresh for Hollywood. When the final cut was shown to studio executives, they were disconcerted by its use of flashback and circular narrative. The visual approach was at odds with the expected hard-boiled thriller. Some heavy editing was suggested. Luckily, they were over-ruled by Margaret Booth, the senior editor who upheld Marvin’s faith in Boorman. However, they may have had a point. The film did not perform especially well at the box office, though it has gone on to be recognised as one of the most important films to come out of Hollywood in that decade.

Point Blank may be 50 years old now, but it’s matured beautifully. It still seems fresh and can be enjoyed on so many levels. It’s a great, well-honed thriller. Every frame is visually gratifying. The performances are bravura, particularly the leads of Marvin and Dickinson. Now it reads as a great period piece, too–those cars, clothes, ’60s interiors and architecture–all selected with the greatest care and attention by Boorman’s production team. For film buffs, there’s plenty to discuss and hours could be spent tracing its influences through cinema history to the present. If you have already seen it, I assure you, it stands a re-watch. If you haven’t… you know what to do.