While HBO often receives most of the plaudits as being the progenitor of the ‘Golden Age of Television’, over recent years it’s been AMC that has actually produced much of the truly outstanding television: Breaking Bad, Mad Men, and, of course, TV’s most successful show, post-apocalyptic zombie drama The Walking Dead. All of which makes it extremely exciting that AMC have finally made their way to the UK, teaming up with BT to launch a new channel that will be the home of their imports on this side of the Atlantic. The channel has already secured two of TVs current best dramas in Rectify and Manhattan (both criminally underexposed in the UK), and the channel will be launching with the exclusive UK premiere of The Walking Dead‘s spin-off/prequel/companion series, Fear the Walking Dead.

To celebrate the new partnership and series, we were invited along to a special preview screening of the first episode of Fear the Walking Dead. And, with the show depicting the early hours and days of the zombie outbreak, the launch party was suitably apocalyptic. 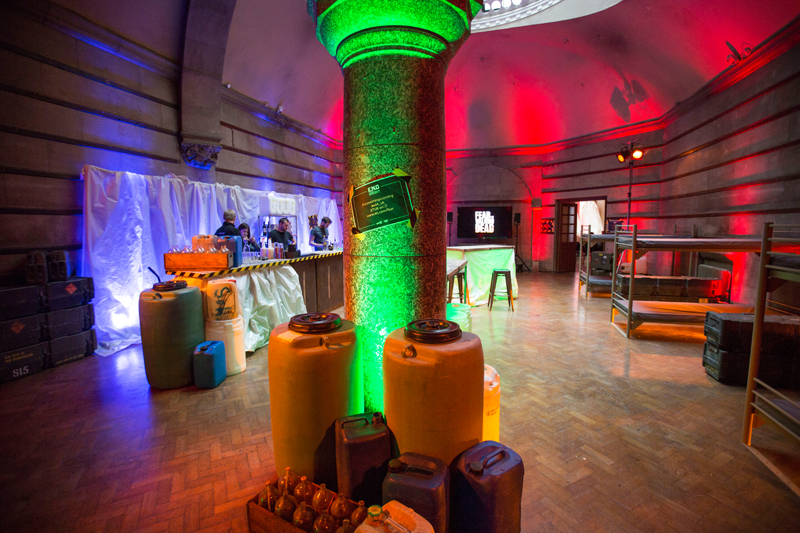 Arriving at the central London location, a password was required to gain entry to what turned out to be a safe refuge from the oncoming pandemic. Armed E.N.D. security guards (that’ll be the show’s Epidemic Neutralisation Department) manned the entrance, and gave strict instructions as to how to proceed while they checked us for signs of infection. Once given the all-clear, we made our way into a bunker, decked out with crates of supplies, protective sheeting over all the doors and windows, vials of samples containing who-knows-what, and a few spartan bunks to crash out in should we be stuck there for an extended period. The dim lighting and concrete surroundings of the Old Central St Martin’s School of Art building in central London only added to the atmosphere—you could almost imagine you were hiding in an air-raid bunker during the war.

Thankfully, though, someone had thought to erect a bar in this particular bunker, behind which a team of hazmat-suited mixologists stood on hand to provide us with some aptly themed cocktails: the ‘Red Alert’, which was made with seemingly every kind of berry-flavoured vodka in existence, and the ‘Chemical Reaction’, which was a ferociously strong cocktail apparently made of neat tequila and little else. Of course, this being an end-of-days sort of cocktail bar, all the drinks were served in battered old corrugated tins. Well, we didn’t want to get too comfy, did we? (It’s amusing to think that places in Shoreditch serve drinks in similarly rustic fashion even without the threat of an apocalypse at the door). 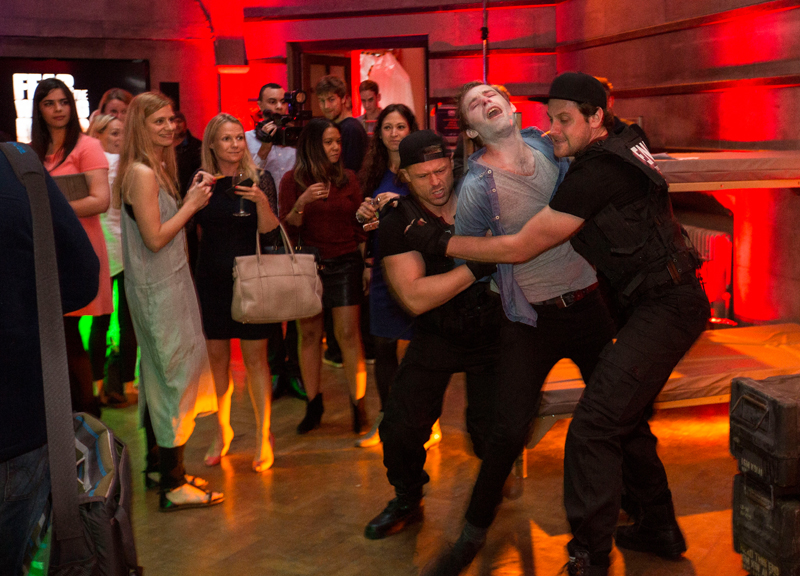 While the survivors mingled and enjoyed the drinks, as well as the army-rations style food pouches that were doled out (rather tasty, actually!), it became easy to forget that this was supposed to be a horror-themed event. And just when you began to feel at ease, E.N.D. guards would burst into the room yelling orders, and scooping up infected persons, hauling them screaming away to… well, we probably won’t dwell on that part. Suffice it to say that they never returned to the party…

Best of all—or should that be worst?—a trip to the toilet became a harrowing experience, as turning a corner revealed a Walker lurking creepily by the stairs! Suddenly, any noise in that corridor became terrifying. Was that noise a Walker about to leap out at us, or was it just a cleaner going about their business? We didn’t hang around to find out. At least the toilets weren’t far away for those who scared easily… 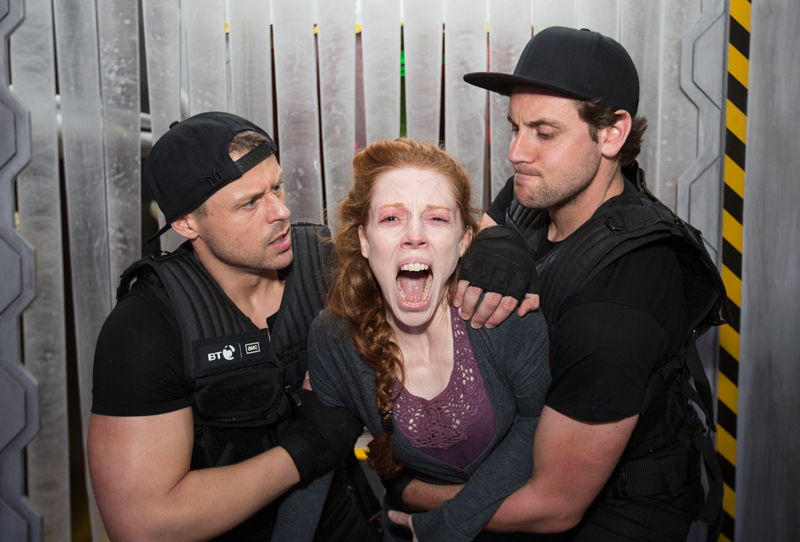 But of course, all of this was just a precursor to the main event—a screening of Fear the Walking Dead episode one. After an introduction to the new channel from representatives from BT and AMC (the latter of whom had flown over from America for the event), everyone sat down to finally view the episode—and the response in the room was hugely positive!

While it’s a completely different beast to the original series, Fear the Walking Dead‘s opener shows that it’s equally good at building up tension, and the show displays a lot of early promise. The first episode can’t compare to the original series’ opening instalment, sadly—which remains one of the best series openers in recent memory—but it does effectively establish the series’ visual tone and a lot of the principal characters. 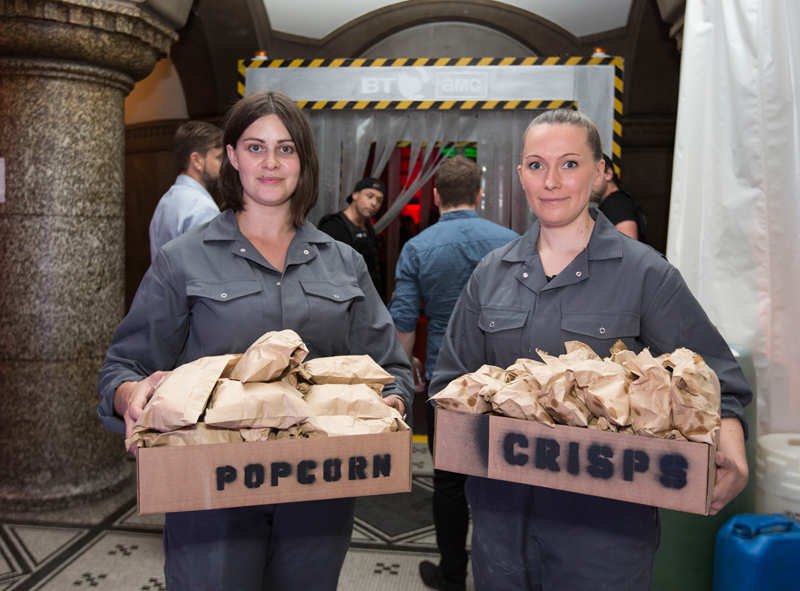 As the lead duo Madison and Travis, Kim Dickens and Cliff Curtis prove likeable and believable leads, while Frank Dillane is perhaps the standout performer as their drug-addled son Nick, who may-or-may-not have witnessed a Walker attack during his latest trip. Less effective is the family’s daughter Alicia, who treads too close to being an annoying teenage cliché. There are other characters of promise, too, but they don’t have enough screen time yet to really judge. Best of them is Tobias, a student at the school that Madison teaches at who seems to have cottoned onto the oncoming disaster that everyone else is oblivious to. (That’s going to lead to the mother of all “I told you so”s when things go south.)

The episode excels at hinting at the horrors to come, and the series delights in teasing the audience with which aspects of the Los Angeles milieu are signs of the outbreak, and which are just every day goings on. Is that a Walker in the park, or just a regular homeless man shuffling about? 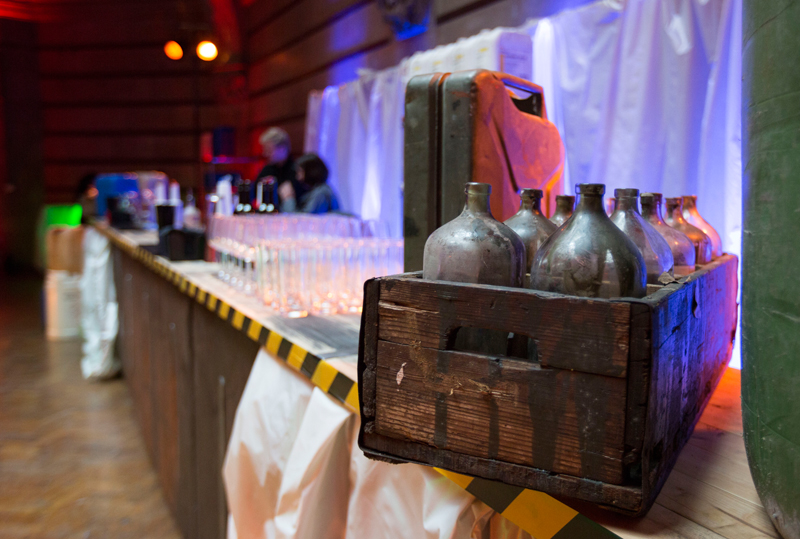 Despite the strong set-up, this show takes place before the outbreak has begun, so don’t expect a huge amount of zombie action in the first instalment. Those who have been conditioned by the original series to expect huge action sequences in event episodes like season premieres should temper their expectations in that regard. This is a slow-burn of a beginning.

After the screening, it was back to the bar to enjoy more drinks and to discuss the episode we’d just seen, until, eventually, it was time to head home. And after all the shenanigans of the evening—from the convincing set dressing, committed actors, and Fear the Walking Dead itself—it was difficult not to wonder just what might be lurking on the other side of that door once the guards let us out…

Catch FEAR THE WALKING DEAD on the new ‘UK AMC’ channel, exclusive to BT subscribers, on Monday 31 August @ 9pm. (BT TV channel 381 for HD; channel 332 for SD). The FTWD premiere will also be shown on the BT Showcase Channel to all Freeview customers (channel 59).

6 to See this January