A flashback sequence sums up where we’ve come from, and where we might be heading in “Fallout”, the season 2 finale of The Man in the High Castle. It is December 1945 and John Smith (Rufus Sewell), wearing his American uniform, and his pregnant wife Helen (Chelah Horsdall), arrive in a hotel room overlooking Washington DC. Before they can settle down for the night, the centre of DC vanishes under a mushroom cloud. Smith recognises that the war is over now the Nazis have dared to use the ultimate weapon. We’re also left pondering if the fall out from the explosion may have been responsible for the very defects that turn up in Thomas Smith (Quinn Lord).

This is the crucible that forms John Smith’s destiny as the scene switches forward to that recent cataclysm, the bombing of the Kempetai headquarters. The bombing is a footnote to a similar nuclear proliferation, which is on course to reshape the Reich-Pacific States reality that formed out of that original war. Smith and Inspector Kido (Joel de la Fuente), who has been left bleeding and injured in the rubble of the headquarters, are the unlikeliest heroes, but that’s how the series now projects them. This despite the fact we know both of them are capable of ruthless barbarity. 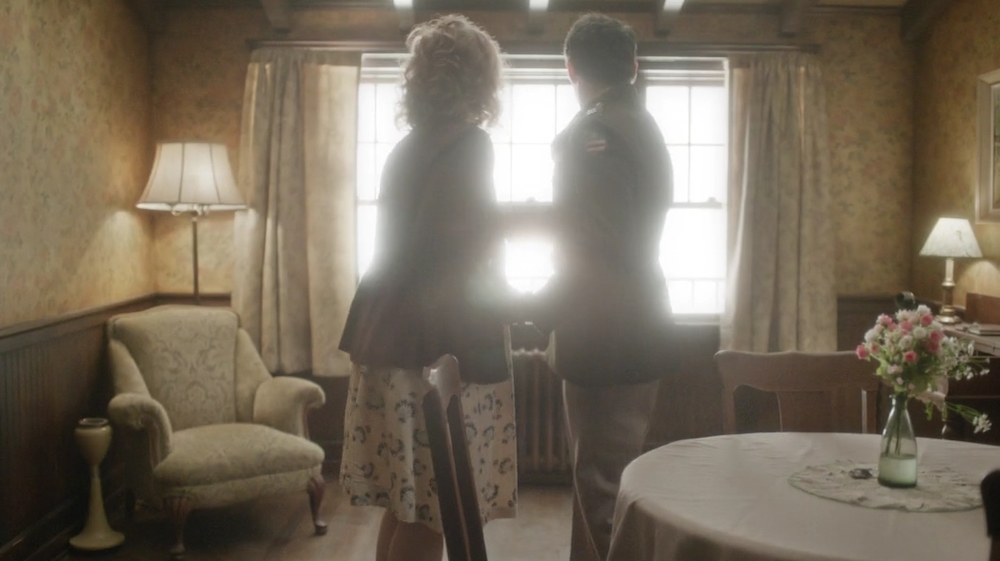 They emerge from events they never anticipated and react to the shifts in power they see before them, becoming men of the moment. It’s unsettling. They’re left to deal with their respective crises; the power vacuum within the Japanese high command, now that General Onoda (Tzi Ma) and his staff have been killed, and the increasing megalomania displayed by Chancellor Heusmann (Sebastian Roche), who plots to destroy Georgia and murder 80,000 people as a response to the alleged Japanese assassination of Hitler. As the Reich launches onto a war footing based on the lie that the Japanese poisoned Hitler, Inspector Kido is treated to a screening of the Bikini Atoll footage courtesy of Tagomi (Cary-Hiroyuki Tagawa). The footage convinces Kido that a nuclear disaster must be averted.

An increasingly nervous Joe Blake (Luke Kleintank) witnesses Heusmann’s rant about leveling Tokyo, gloriously claiming it will be “the last war” because he’s pretty sure the Japanese don’t have a nuclear capability. Of course, because the show’s writers don’t really know what to do with Joe, they have him shift back to ‘doubting Nazi’ mode, weakly attempting to show his father he’s going a bit too far with all this talk of “the master race”, and then, because he’s so ineffectual as a character, left to salve his tortured brow in a totally incongruous love scene with Nicole (Bella Heathcote). I find it hard to believe that characters such as Frank, Ed, and Childan have been removed from the series, and yet Joe (a two dimensional creature lacking the necessary emotional connection) is still like a dangerous driver swerving uncontrollably around the narrative rather than connecting to it. 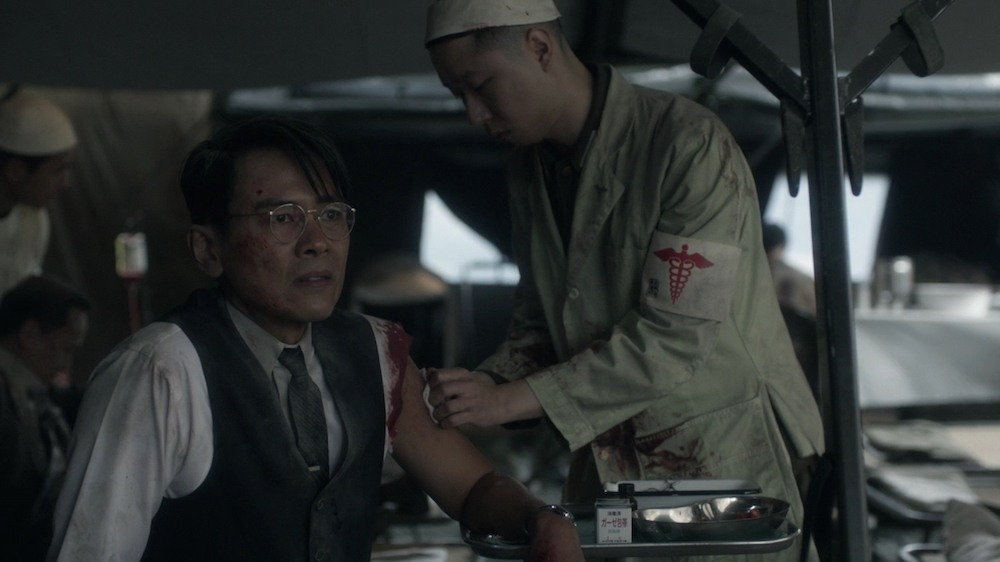 Back at home, Thomas Smith confronts his parents about his muscular dystrophy and the tender moment between father and son, where John reassures Thomas that “you’re going to be okay”, is enough to set off alarm bells. This is a bit of blatant manipulation, acknowledging that the Thomas Smith sub-plot is not going to end well. More empathy is about to be piled onto John and Helen’s shoulders, underlining their connection to the propaganda of the era where family and community — the Volksgemeinschaft — was all. John Smith is shown as ‘a man of the people’ first and foremost.

The audience knows that while Onoda’s nuclear device may not have gone beyond transporting nuclear material on a public bus, Kido has been convinced the Atoll film is of a recent test. He persuades John Smith to watch it. There’s been an interesting dynamic developed between Smith and Kido, a veiled sense of respect for each other as they set out to utilise whatever influence they have left to try and save their families. Yet again, we’re expected to have sympathy for two men who have spent the last two years on the show murdering and exploiting people. The writers are layering on a sympathetic morality to Kido and Smith that is pernicious. 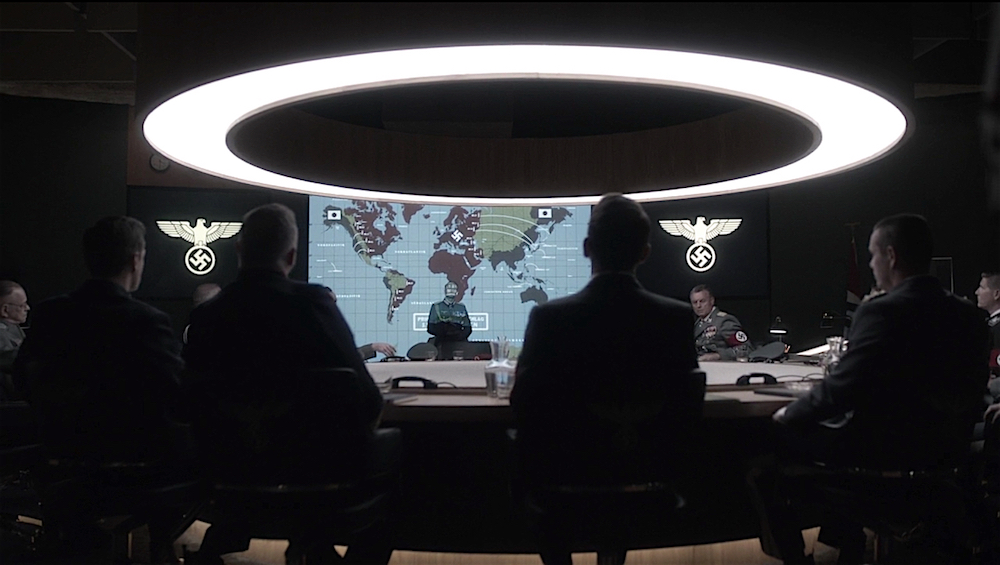 The episode manages to build to an exciting climax. Smith’s very uncomfortable about Heusmann’s rise to power and needs some kind of leverage to convince the higher echelons of the Reich, namely Himmler (Kenneth Tigar), that all is not well in the state of Berlin. He persuades Joe to give him access to Heusmann and his cronies in the War Room. However, it’s only when Smith tells him that Juliana is still alive that Joe goes all gooey eyed and allows him to screen the Bikini Atoll footage and convince the War Room occupants that the Japanese have been conducting nuclear tests.

Smith also has other evidence up his sleeve, proving that Heydrich and Heusmann were working together and were responsible for both poisoning Hitler and the assassination attempt on the Crown Prince of Japan. Himmler orders Heusmann’s arrest and, perhaps in one of the most chilling moments in a clunky, tricksy finale, pushes Smith to the apogee of power as a ‘true Nazi’, elevating him to the higher echelons in front of a packed auditorium. 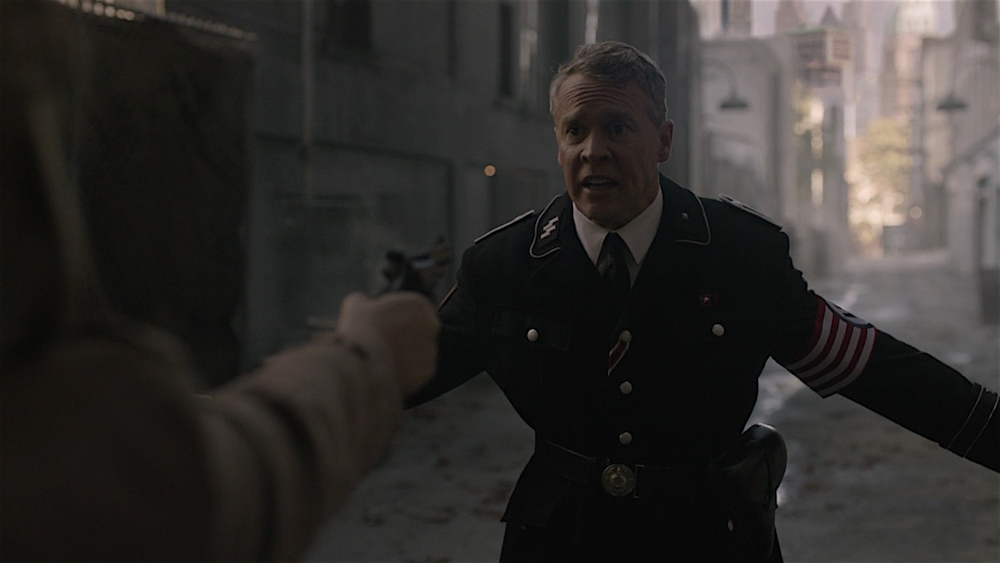 As I noted last week, The Man in the High Castle has mutated into a strange, unsettling juxtaposing of the ridiculously kitsch version of Nazism with the horrifying, chilling reality of fascism and its rise to power. Into this mix “Fallout” throws some not-so-subtle visual references to Dr Strangelove’s production design, offering a pastiche of its iconic Ken Adam designed War Room to underscore the Cold War themes. As Heusmann slowly becomes as unhinged as Peter Sellers’ Strangelove in front of his maps and bomber movements you’re tempted to yell at the screen “gentlemen, you can’t fight in here! This is the War Room!”

It’ll be interesting to see how Smith deals with the immense power thrust upon him. Will it corrupt him entirely or will he remain that ever-loving Nazi family man? And what is he going to do with the archive of Abendsen’s films that he’s presented with? One thing is for sure, he’s going to be left feeling very bitter because the pay-off to the Thomas Smith story plays out simultaneously with his brief moment of glory. 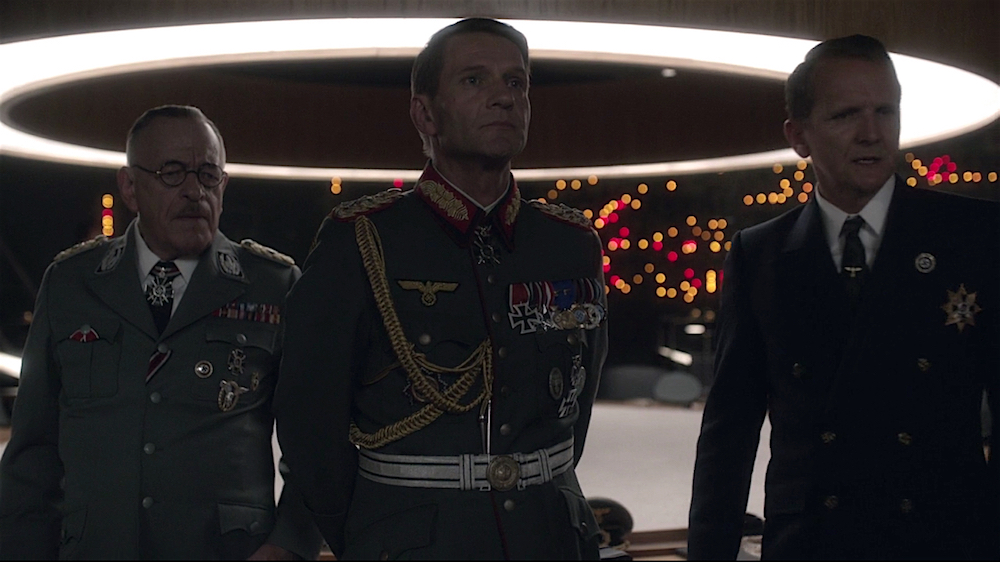 Having watched his father save the Reich from making some terrible decisions, Thomas clearly feels he, his family and the Reich will be better off if he hands himself over to the Public Health Department and calmly surrenders to the fate of all defectives in the Reich: euthanasia. It’s another good moment in the finale, showing how John Smith’s frightening ‘Triumph of the Will’ ascension reinforces Thomas’s decision, but primarily because Chela Horsdall gets to ramp up her presence as his distraught mother Helen. Horsdall has been the one to watch all season, offering a nuanced and effective performance that undercuts the audience’s empathy with a steeliness that reminds us she will always remain loyal to the Reich.

And so what of our other main character, Juliana (Alexa Davalos)? The Resistance has been eavesdropping on her apartment and George Dixon (Tate Donovan) reveals that they know everything about her meeting with Thomas and about his illness. They want to exploit that intelligence, captured on tape, to undermine the Reich and John Smith. A struggle ensues and we finally see the prophecy of one of Abendsen’s films fully realised. The film where San Francisco is saved from nuclear holocaust reveals it is only Juliana’s actions that bring about that particular reality. 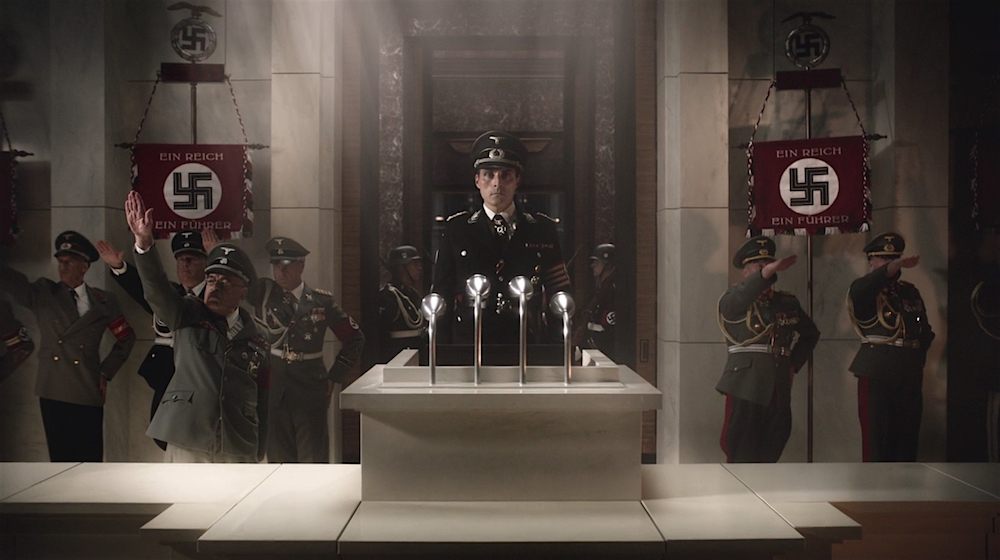 George Dixon appears, ironically wearing a Nazi uniform as a disguise that underlines the sense of ‘playing’ Nazis that the series keeps reinforcing and suggesting that the Resistance are just as culpable for their own form of dictatorship, and attempts to reassure Juliana after other Resistance members attempt to murder her. When he suggests that they need to be worse than the Nazis to beat them, she shoots him, destroys the tape, and by doing so preserves John Smith who, in turn, has time to complete his coup to remove Heusmann. This is all very well and good, but having events turn on the importance of Juliana’s actions feels underwhelming because, in effect, as a character she is as equally undemonstrative as Joe Blake. Davalos works hard to make Juliana ‘heroic’ but, sadly, she’s unable to overcome some weak writing and character development.

We finally see Juliana in the Neutral Zone, encountering Abendsen (Stephen Root) who confirms the outcome in this reality has always hinged on her actions. She’s in every film, every reality. As a reward, she’s reunited with her sister Trudy. Yes, the one that’s supposed to be dead. It’s feels like a very contrived twist and we’re left wondering where this new Trudy came from. She is surely a Trudy from another reality and a reality where another Frank might exist, too…

The finale ends with the reappearance of Lem (Rick Worthy), last seen driving off with Abendsen and some of his films after burning down the Man in the High Castle’s archive. Lem turns up on Tagomi’s doorstep and promptly hands him a bag of Abendsen’s films. The torch has been handed over it seems and not only from Abdensen to Tagomi, but from Heusmann to Smith and, behind the scenes, from Frank Spotnitz to Eric Overmyer. What Overmyer will bring to the series is anybody’s guess, but it is now so far removed from Philip K. Dick’s book it is The Man in the High Castle in name only and is it’s own creation.

YOU, ME & THE APOCALYPSE – ‘Episode Eight’